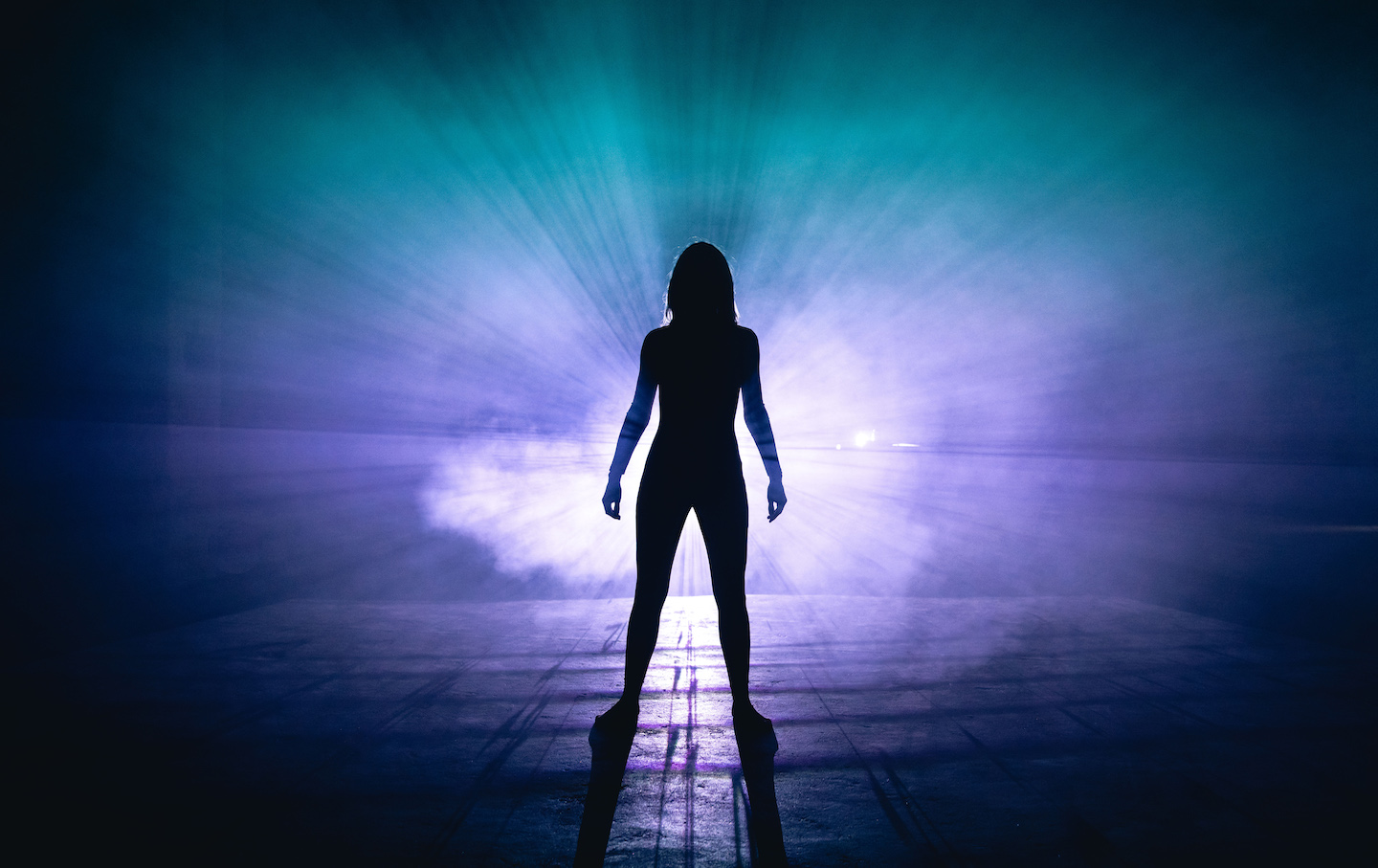 There have been two Maria Schneiders in the cultural arena—or three, counting the late French actor from Last Tango in Paris—until now. The first is an internationally esteemed composer and conductor, the recipient of five Grammy Awards and 12 nominations for jazz and classical works lauded for their luxurious beauty, enveloping warmth, and connectedness to the natural world. The second is a fiery political activist, an advocate of musicians’ rights and a critic of tech companies, who has organized creative artists in resistance to the oppressive practices of Google and YouTube. Both Maria Schneiders have inhabited the same body but at different times: one by night, onstage in concert halls and jazz clubs around the world, the other by day, at lecterns at universities and behind a microphone at congressional hearings.

The two Maria Schneiders have inched closer and closer in recent years, with the composer taking advantage of funding from the Library of Congress to experiment with music on the themes of the activist Schneider’s work. I first heard the product of that commission, an 11-minute instrumental piece called “Data Lords,” in a club show by the Maria Schneider Orchestra, the 18-piece ensemble she has led since 1992, at the Jazz Standard in New York City two years ago. I was stunned—jolted and baffled and thrilled in a way I can compare only to the first night I walked into CBGB and saw Richard Hell and the Voidoids or the first time I experienced Cecil Taylor at the Village Vanguard. With the exception of one song she arranged for another artist, nothing I had ever heard from Schneider prepared me for the dark, cerebral fury of “Data Lords,” and I had been paying close attention to the Maria Schneider Orchestra since the ’90s, when I went almost every Monday night to the group’s weekly residency at a little jazz club called Visiones in Greenwich Village.

As a composer and leader of her own ensemble for nearly 30 years, Schneider has recorded nine albums of music that certainly qualifies as jazz, with a few exceptions, and that has been performed, in most cases, by a band that is certainly big. Still, it would be reductive and misleading to call her work big-band jazz. The music of the Maria Schneider Orchestra is orchestral in aesthetic as well as name: intellectually ambitious, texturally varied and complex, sometimes grand but never grandiose, and singular—unmistakably the work of a highly individualistic creator. Her work, in its harmonic density and ever-shifting structure, makes no effort to hide the influence of classical composers such as Frederick Delius and Aaron Copland and of jazz bandleaders and arrangers like Claude Thornhill and Gil Evans. (Schneider was a protégé of Evans, who was a protégé of Thornhill, and she assisted Evans in preparing the score for Martin Scorsese’s The Color of Money.) At the same time, Schneider’s music has always been fiercely her own and most distinctive for its deep humanity and fearless beauty.

The one exception before the “Data Lords” piece I heard at the Jazz Standard was Schneider’s unexpected collaboration with David Bowie, the song “Sue (Or in a Season of Crime),” which he released as a single in 2014. Created at his initiative after he saw a concert of Schneider’s, the song is a genre-blurring work of grim ecstasy, a message to a lover whom the singer (Bowie) plans to murder. The accompanying music, performed by her orchestra with Schneider conducting, swirls like a room spinning in the last moments of consciousness and won her a Grammy in 2016 for best arrangement, instruments, and vocals. He invited her to help make his next album with him, but she declined, recommending that he work with her tenor saxophonist Donny McCaslin, which Bowie did on what was his final release, Blackstar. Schneider had a big project of her own to do, one that the aural mood of Bowie’s murderous ballad foreshadowed.

That big project was an album, also titled Data Lords, and with it, Schneider has fully united her musical and political selves, working with repurposed fearlessness to tackle the impact of the digital revolution on humankind. Data Lords is a set of two albums: the first a musical consideration of the tech industries and their purposes, overt and covert, called The Digital World, the second an ardent evocation of life before and apart from the wireless technologies, Our Natural World. As a study of parallel worlds defined by their differences, the project clearly mirrors its creator’s two selves. But it’s really not so binary.

Beyond the dualism in its format, Data Lords is a work of holistic creativity. The music of outrage and critique in the first album has all the emotion and conceptual integrity that the music of melancholy and reverence does in the second. I can’t conceive of anyone else creating this music, unless Delius has been writing with Bowie on the other side. The instrumental colors and rhythms in several selections on The Digital World (Ben Monder on electric guitar on the opening track, “A World Lost,” Mike Rodriguez on electronically processed trumpet on the title track, and Greg Gisbert on processed trumpet on “CQ CQ, Is Anybody There”) are programmatic in a way, suggesting the sound of the 21st century but not literally. They sound like the way life in the age of omnipresent screens and never-present people feels—intoxicating, enervating, self-gratifying, and self-negating. The six tracks on Our Natural World, much the same, evokes timeless but fragile beauties and mysteries of the earth with the sonic density and technical exactness of the tracks on The Digital World.

That Schneider refers to the natural environment but not the digital sphere as “our” world reminds us of our arrogant presumption of sovereignty over nature as well as our common responsibility to it. She writes with passion on both the preciousness of our natural heritage and the dangers in our reliance on digital devices in the 64-page booklet accompanying the music:

While big data companies have only recently come under real public scrutiny, we musicians have had our eyes on them for years. We were among the first to see our life works exploited and traded on the internet for data. Now, nearly everyone’s life is similarly exploited. There’s hardly a place where some company isn’t extracting and refining the minutiae of our lives to manipulate us to buy things, to influence us, or to fuel machine learning and artificial intelligence.

One doesn’t have to agree with Schneider about the horrors of the digital culture or the glories of nature to be moved by this extraordinarily serious and emotive piece of work. Yet the fact that it is so moving makes Data Lords persuasive. Watching and listening to Schneider’s two selves over the years, I’ve always been more taken by the composer’s art than the activist’s arguments. Now that they’re united and I don’t have to choose, I’m with them both.