In 1988, feminist art agitators the Guerrilla Girls produced a poster that listed the so-called advantages of being a woman artist. The bullet points included: “working without the pressure of success”; “being included in revised versions of art history”; and “knowing your career might pick up after you’re eighty.” Luchita Hurtado, it can be stated, had to wait until she was nearing her 100th year for the art world to take note of her. The Venezuelan-born American painter, who was influenced by Surrealism and Abstract Expressionism without fitting snugly into either category, took nature and the cosmos as the basis of her work, often depicting her body as an extension of these realms. She painted prolifically, in relative obscurity, for 70 years before a Los Angeles gallery show put her on the map in 2016. By the time she passed away in 2020 at the age of 99, she was represented by Hauser & Wirth, and had been booked for solo exhibitions in London, Mexico City, and her adopted hometown of Los Angeles. Now, her gallery has released a book about her work, Luchita Hurtado.

Part scrapbook, part autobiography, Luchita Hurtado includes extended interviews with celebrity curator Hans Ulrich Obrist that detail her action-packed life and self-described “planetarian” philosophy. The book does not attempt to reinsert her into a preexisting canon of modern art history, as it explores her veneration of nature, and humanity’s entanglement with it, in her paintings. Rather, it suggests a parallel vision of what postwar painting could have looked like had her spiritual aesthetic been recognized earlier.

Luisa Amelia Hurtado—”Luchita” was her nickname—was born in November of 1920 into a middle-class family in the coastal village of Maiquetía, just outside of Caracas. Her mother worked as a seamstress and her father was a representative of Singer sewing machines. In 1923, Hurtado’s mother left her father in Venezuela and absconded to Manhattan. She returned to collect her five years later, when Hurtado was 8 years old, and together they resettled in New York. It was snowing when their boat arrived via Puerto Rico, and Luchita was captivated by the sight of ice. “It was cold, it responded to touch and to taste,” she says. “I put it in a drawer with my clothes and when I went back to see this great treasure, it was gone, just a wet spot. I think that’s when I became a poet.”

Hurtado secretly enrolled in art classes at an all-girls high school downtown, where her mother thought she was studying dressmaking. The first drawing of hers that appears in the book, Untitled (c. 1938), is a delicate graphite and colored pencil picture of a stove-top burner, which is so ghostly in its detail that you don’t so much see the ring of low blue flame as simply sense that it’s there. It gestures at two of the major concerns that emerge in the rest of her oeuvre: an attraction to elemental forces like fire, and an ability to find the magic in domestic scenes that might otherwise seem banal. As a woman in the first half of the 20th century, and later a single mother who sold fashion illustrations to pay rent, she was afforded few opportunities to venture out alone in search of inspiration. But in the company of her three husbands, she’d go on to travel widely, making cameos in art history through encounters with icons like Frida Kahlo and Andre Breton. She often took cues from the people and things she encountered on the way (Mexican pre-Columbian artifacts, for instance), but always returned to the body as the locus of the sublime. The last canvases of her life, from 2019, are depictions of her giving birth.

At 18, Hurtado married the Chilean journalist Daniel del Solar, who was 20 years her senior, and they moved to the West Village. He introduced her to her first mentor, Rufino Tamayo, Mexico’s most influential modernist painter. “We would often play games together,” she says, “analyzing, for instance, what colors we would need to mix together to match something in the room.” Hurtado’s painting Untitled (c. 1947–49)—which depicts a dusky scene of deer drinking from a watering hole—is especially redolent of Tamayo’s sensibility, with its folkloric style and dramatic nighttime glow, which gives the moon an almost sacred presence. Del Solar later introduced her to the Japanese-American sculptor Isamu Noguchi, who had recently returned from an internment camp in Arizona. Hurtado and Noguchi remained lifelong friends, even after her relationship with del Solar ended in 1946, when he left her for another woman.

Hurtado’s paintings from the 1940s and ’50s take after the high modernist abstract style of artists like Joan Miró and Piet Mondrian. You can see their influence in her riotously colorful, richly textured fields of totemic shapes, which stand out in part because of a technique she developed using wax crayons and ink, whereby the ink would roll off the wax and pool in bulbous droplets. Like many modernists—Picasso, most famously—Hurtado sought inspiration from non-Western visual cultures too, which transformed the Euro-American avant-garde as they made their presence felt in the centers of empire. In 1946, while her children were away at summer camp, she fell in love with an Austrian-Mexican painter and magazine editor named Wolfang Paalen, who whisked her away to Tabasco, Mexico, to see newly unearthed 3,000-year-old Olmec heads—10-to-20-ton boulders carved with human faces by Mesoamerica’s oldest known civilization. She arrived to meet him in a small prop plane, which the pilot let her steer as they sailed over the jungle canopy: “He saw me coming in the airplane,” she recounts, “and suddenly I was making it do these loops—going way up and coming down. That was a delight to me!”

Hurtado moved to Mexico City and became ensconced in the city’s left-leaning intellectual elite. She befriended Frida Kahlo and Diego Rivera—Rivera was “too much of a clown” for her, and the duo acted like “grown-up children,” but she admired Kahlo’s free spirit and resilience. Her frankness in discussing the giants of modern art is refreshing. The Chilean painter Roberto Matta was a “terrible, mean man” who pinched her backside once to see how she’d react. Jackson Pollock was an unpredictable brute: She remembers him “pulling the table cloth with everybody’s food on it and just sweeping it up.” Marcel Duchamp insisted on giving her a foot massage upon first meeting her at a friend’s house, an anecdote that she describes as “pleasant,” though she recalls that she couldn’t have said no if she wanted to. 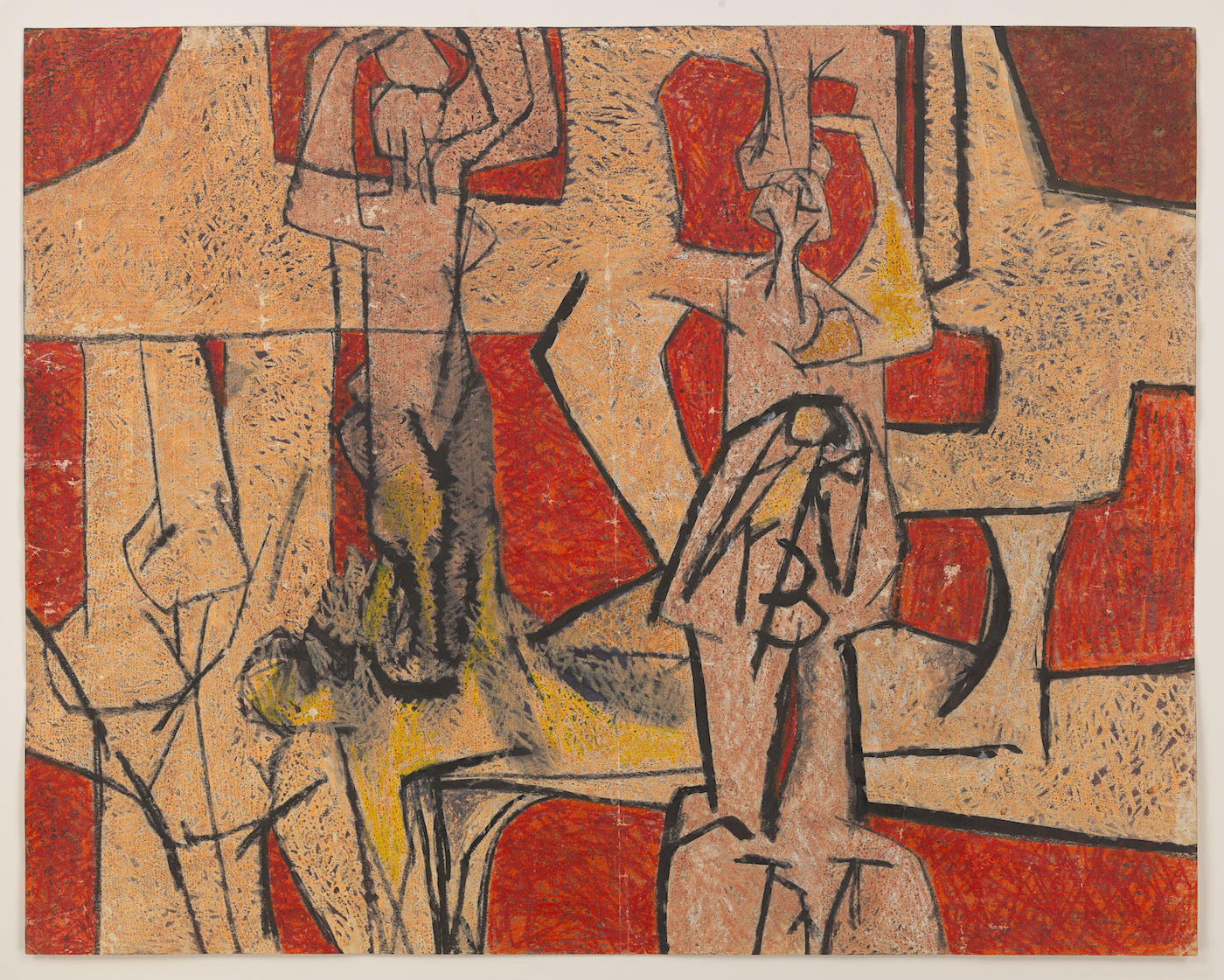 Untitled, 1950-51. (Courtesy The Estate of Luchita Hurtado and Hauser & Wirth)

By the late ’60s, Hurtado’s style had fully come into its own. Untitled, from 1968, introduced one of her trademarks: the nude self-portrait as seen from her perspective looking down. These are the most vital works of her career, and they led her to the further development of portraying bodies as landscapes, using closely cropped frames to render breasts and stomachs as rolling hills and valleys. Her use of Southwestern Native American rugs and baskets as set pieces in these paintings reflects the influence of Taos, N.M., the New Age artist enclave where she spent many summers in the ’70s and ’80s. This desert aesthetic is also apparent in “Sky Skins,” a series of window-like skyscapes that are adorned with floating feathers and encircled by dunes and arid mountains.

With the exception of brief sojourns to Chile and Italy, Hurtado lived out the rest of her life in Los Angeles, at peace in a landscape of tall trees and canyons. She joined the Los Angeles Council of Women Artists, an advocacy group formed in response to the all-male roster of artists that the Los Angeles County Museum of Art picked for its 1971 Art & Technology program. “It wasn’t until I joined this women’s consciousness movement that I started to show my work and not turn my paintings toward the wall,” she says. Despite the renewed confidence, she had only one, self-organized solo show before her big break at 95, and many of her group shows took place in ghettoized “women’s-only” settings. It wasn’t until 2015, when her late third husband Lee Mullican’s estate director came to photograph Mullican’s art that he happened upon a set of paintings signed “LH.”

The question of whether Hurtado was snubbed, or if she chose not to publicize her work, is a lacuna in the book. She almost never hung her paintings at home, but she did appear in group shows from the ’70s on, which suggests some desire for public attention. It’s worth noting that her recurring themes—motherhood, the spirit, the oneness of all things—were stigmatized as kitsch by the Abstract Expressionist school, with its emphasis on form over content. The art critic Rosalind Krauss famously wrote in 1979 that, in modern art, it was “indescribably embarrassing to mention art and spirit in the same sentence.” Critics today say that this spiritual root was actively erased from the history of modern art, a claim that’s supported by the sudden popularity of early-20th-century painters like Hilma af Klint and Agnes Pelton, both of whom depicted celestial realms that appeared to them in visions. But this mode of art-making also required a humility and a deference that’s at odds with the ethos of a preexisting canon. For a painter like Pollock to acknowledge his debt to nature or the spirit, he risked downplaying the myth of his sui generis genius. Luchita Hurtado shows no interest in perpetuating this myth, and neither did Hurtado herself.