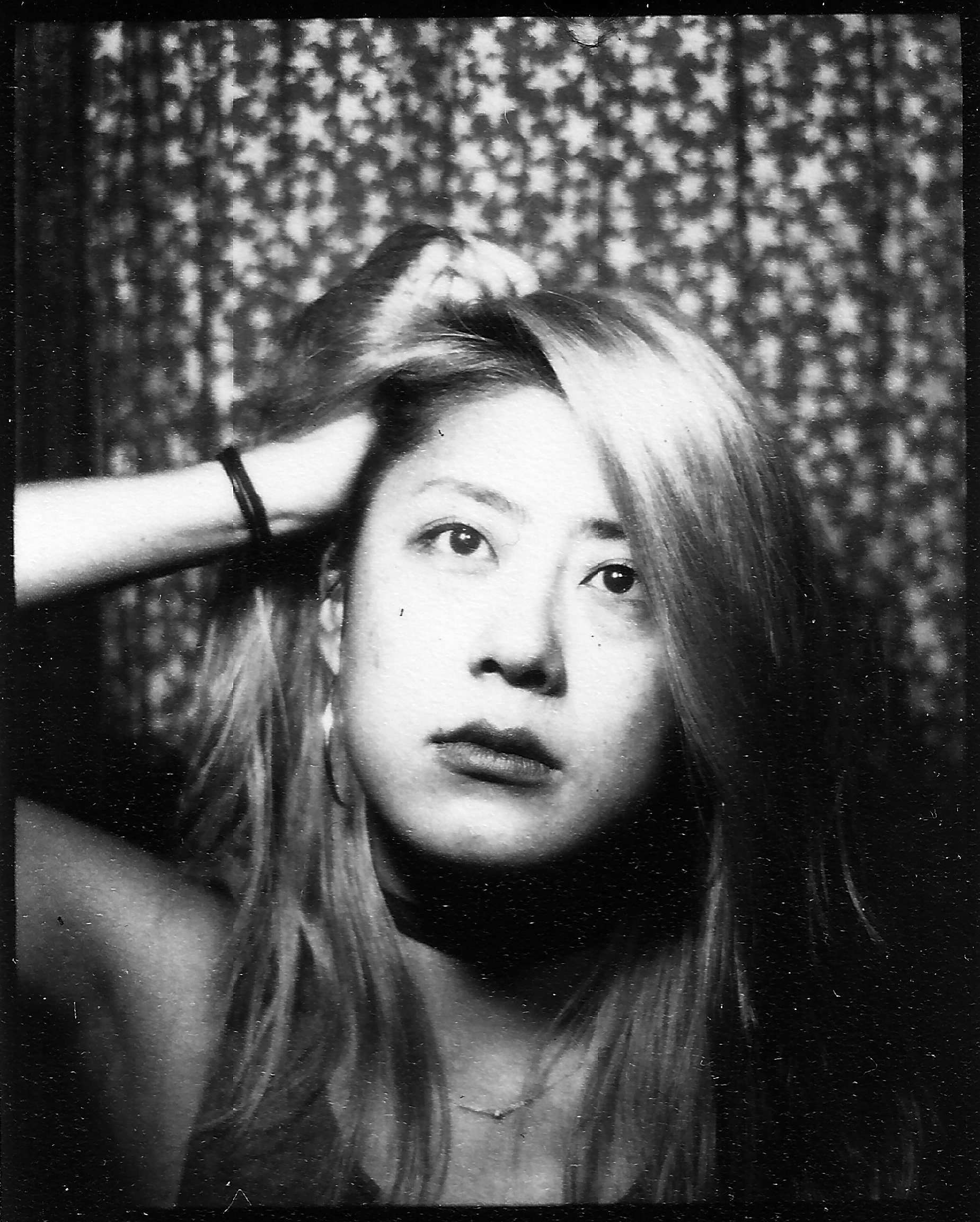 “Goo,” in Jenny Zhang’s writing, is a noun, a verb, and an adjective. In her poems there is “goo goo water” and a “goo goo baby.” Bodies can leak and leave a “goo trail,” or mouths can “swear in goo goo.” Someone can feel “goo” or “feel so much” that they goo. Goo is what Zhang’s poetry—itself so much about feeling—feels like: viscous, sticky, thick. It reminds me of the monosyllabic elocution of babies playing with the joys of guttural sound for the first time. Goo perfectly describes the tactile viscidity of Zhang’s aesthetics—always a little disgusting, like all bodies are—and the indissoluble, gummed quality of the love that is at the heart of her fiction, essays, and poems.

The 97 poems in My Baby First Birthday, Zhang’s latest collection, masticate this gooey love. They seem to chew, swallow, digest, and shit out the irredeemable injustice and beauty of being born to a world we did not choose and to a family we never deserved. Zhang’s own mother has called her poems “touchable,” and in My Baby First Birthday, you can see why. “I am not interested,” Zhang said in an interview, “in writing that’s just a bunch of ideas floating independent of the human bodies who came up with them.” Not only are bodies present in the poems, but the poems themselves seem to have corporeality—glob-like and many-limbed. Zhang has called herself a materialist and “occasional” sensualist. In her chapbook-length essay Hags, she writes that, as a poet, she was “unable to look past what was right there. Unable to hear anything except what was audible. Unable to imagine touching anything that did not already have a name, a defined form. I repeated the same ideas in every poem.”

If that idea were to have a body, it would be newly born. Reading My Baby First Birthday feels like immersing oneself into the muck we are all born with and born into, that gory goo of flesh and blood that covers us as we are unknowingly delivered into a world designed to make some bodies suffer for the benefit of others. To think, another poem adds, that “my mom was a baby too / and inside her was a teenier baby / if not for that baby / I would still be / essentially an idea.” Who gets to be a baby? Who was never granted such innocence? Can we be our own mothers? Can we not just survive but also deserve the life and love we have been unwillingly granted? Zhang’s poems respond to these questions with yearning, rage, and grief for a kind of wholeness and tenderness that is robbed by trauma. In “leetle,” she writes that “the best people still don’t / dance cuter than when they were kids / there’s a way of moving that indicates / no one has ever hurt you.” Elsewhere, she writes, “be the baby ppl didn’t let u be / for once in yr life / & see what happens.”

Zhang’s previous work includes Sour Heart, a celebrated collection of short stories, the aforementioned Hags, and Dear Jenny, We Are All Find, her first collection. These early poems already exhibit some of the enduring obsessions present in her later writing: scatology (one poem is titled “Bloodturd my friend”), friendship, and her mother’s idiolect (“to know me is to know my mother’s bad English”). Zhang has also earned a devoted following as the patron essayist on the painful tenderness of youth for Rookie, which only grew with the publication of Sour Heart.

Sour Heart is nested in the overlapping universes of six first-generation Chinese American girls living in and around the outer boroughs of New York City. The stories are characteristic of Zhang’s work—gross, hilarious, obscene, disarming, and tender, often all in a single sentence. The girls’ biographies trace similar outlines: immigration marked by bouts of extreme poverty, the ever-present tension between integration and integrity, and, after a lot of work, eventual prosperity. Each narrates her self-discovery and strife with the delusion and clarity only afforded by childhood. Almost all the young girls have a consuming devotion to their parents, artists and intellectuals who, upon their arrival in America, were forced to abandon their aspirations and became bike deliverymen, seamstresses, teachers, street vendors. Their love can be totalizing or cruel, removed or resentful. The unvarnished details of their sacrifice and destitution are humbling, heavy. In one story, when Cristina, one of the young narrators, throws up her dinner, her dad gives her his portion and eats her vomit. With these stories, Zhang imparts, with her own twist of candor and humor, the cost of becoming American—what the grueling process of acculturation can do to familial love, how it can distort that bond into something brutal and unbreakable.

Despite the poignancy and shimmering weirdness of Zhang’s work, more recently, her project as an artist has been hyphenated with the limiting charge of communicating her experience as an immigrant writer of color. Zhang writes about this lucidly in her essay “They Pretend to Be Us While Pretending We Don’t Exist,” which excavates the racist motivations of yellowface—in this particular instance, the poet Michael Derrick Hudson, who published poetry under the pseudonym Yi-Fen Chou—while detailing what it is actually like to be a writer of color. Because of her name and her race, Zhang knows she and other writers of color will be “denied any opportunity to ever write something without the millstone of but is this authentic/representative/good for black/Asian/Latino/native people? hanging from their necks.”

In “your body is slanted” from My Baby First Birthday, Zhang writes, “when did I agree to be a textbook / for you and your whole dumb family.” Reading this, you can hear the emphatic exhaustion of a speaker who, having made the rounds of interviews and panels and events and dinner parties, is tired of being asked to contribute her “intellectual emotional and psychic labor” to educate white people, especially when she is often the only person of color in the room. Her writing, like that of other writers of color, is repeatedly read by her white peers for how pristinely it reproduces her pain or how well it enlightens “timely” or “urgent” issues. All that wild sensuousness and the almost grotesque tactility of her art is corralled into the straitjacket of acceptable legibility. “My imagination and my talents,” Zhang writes, “were framed again and again as too limited, too provincial, too tethered to my identity.”

So Zhang refuses to stay tethered. In her essay “How It Feels,” she celebrates I’ve Got It All, a self-portrait by the artist Tracey Emin, who depicts herself sitting on the floor with her legs spread, bills and coins either spilling forth or being shoved into her pussy. The portrait, Zhang writes, is “so completely trashy and gleeful and celebratory and excessive and weird, but in another sense, the photo is so much that it becomes a statement against allowing others to tell your story, against those who would insist on your victimhood.”

The same could be said of the poems in My Baby First Birthday. At times, they read like Emin’s quintessential neon signs: “I’m not an easy woman,” one poem declares, “And why would you want to be?” The poems are crude and generous, bratty and defiant. In them, Zhang plumbs baby-ness in all of its squirmy mystery, relentless need, and unfathomable vulnerability. Anyone who has spent time with an infant knows that babies always ask for what they want and never apologize. Babies might be helpless, but they are not, in Zhang’s universe, victims. “You’re not supposed to be sassy and ungrateful when you’re a victim,” Zhang noted in an interview with the Poetry Foundation. “Victims can’t be cunts.”

Zhang is at her most defiant when she directs the second-person address in her poems to the  agents of white supremacy. These eviscerations are some of the most satisfying works in the collection. In them, Zhang dodges “all the saviors / who wanna make heroes / out of our peril,” bursts white fragility’s bubble (“what is it with you / and your need to not ever be blamed?”), and torches self-righteous “liberals”:

when did we agree to be on the dumping end
of your no-waste life
just being allowed to live is maybe a waste
& it won’t be long before someone adds up
the energy it costs to keep a life like yours
meaningful in the way you’ve come to expect.

Still, her rage at injustice is fueled by equally unsparing love. Her art is itself protection from and revenge for what white supremacy has stolen from writers (and people) like her:

What was there from the beginning, and how can we touch it? In one of her earlier essays in Rookie, Zhang confesses that, in her middle school diary, she wrote that she wanted “to be the first baby to remember what it was like to be born.” Some of the gooiest poems in the collection conjure this impossible memory, twisting and reversing the imagery of motherhood and daughterhood, of birth and care, into a nearly orgiastic communion. Daughters climb back into their mothers’ wombs, daughters breastfeed their mothers, mothers kiss their daughters’ crotches, daughters mother their mothers. Maybe this is what birth felt like—a moment of intense feeling, pain and gore and beauty and also pleasure (and a lot of goo). “did you ask to be born?” a poem asks, “to think the very first moment / happened without you knowing.” Can you be grateful for something you never asked for? “but in the end,” the poem continues, “it is almost impossible / to say no to more life.” Birth—that unfathomable and universal moment, closely coupled with death—is a kind of inexplicable violence, one that no one ever asked for. And yet, as Zhang knows, life—even when we didn’t ask for it—is both a gift and a debt, our most precious and painful inheritance. “Someone has to feel it,” Zhang knows, “it might as well be me.”