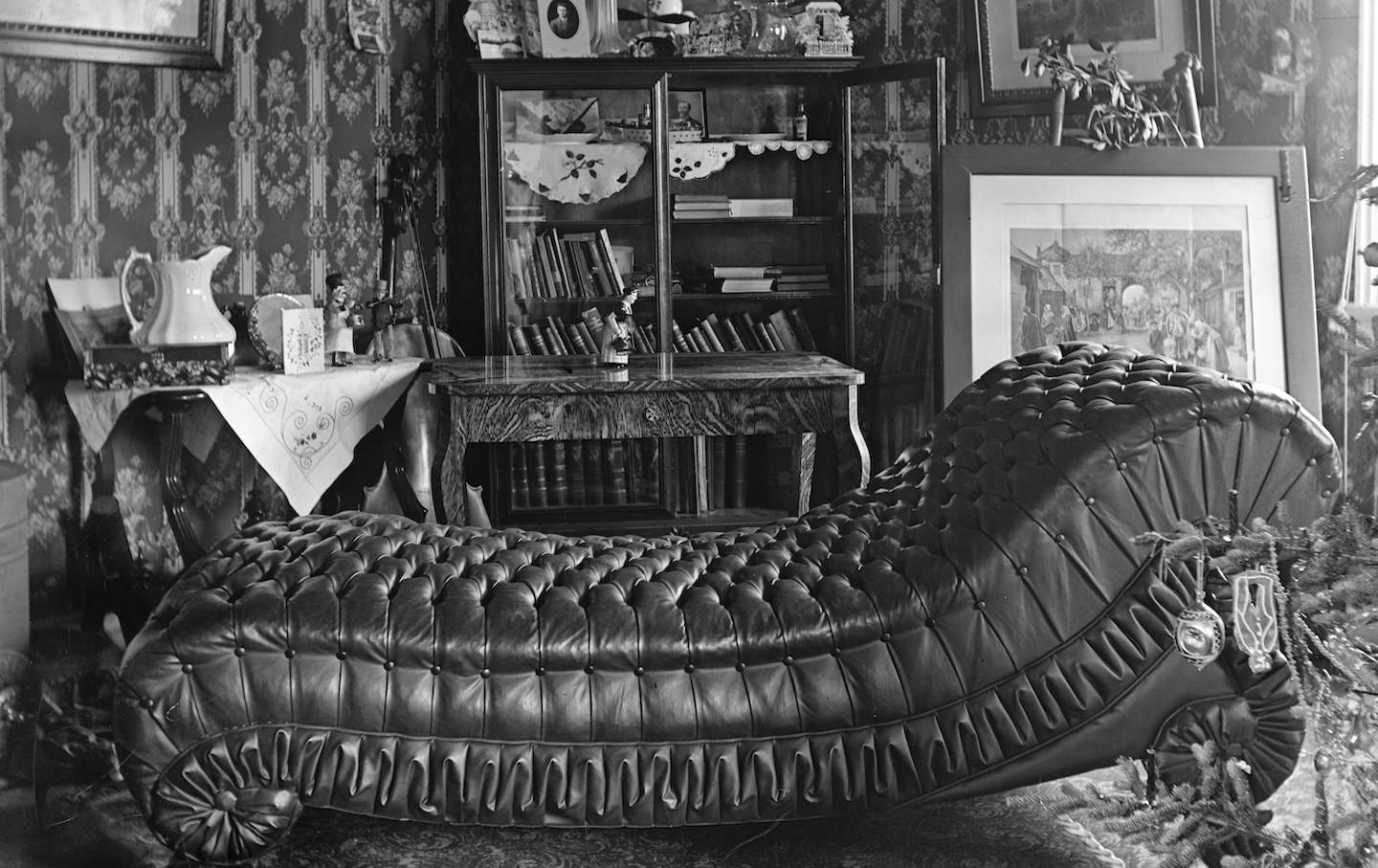 Early last week I was lying prone on my couch reading a passage from Janet Malcolm’s 1980 book-length report on characters in and around the New York Psychoanalytic Institute, Psychoanalysis: The Impossible Profession, to my boyfriend as he sat behind me in an armchair. The passage I read introduces an analyst who is given the pseudonym Gregory Cross. As with so many of Malcolm’s characters (“subjects” never seem like the right word, although she was a journalist by trade), our first glimpse of Cross is hinted at by the manner of the room in which we find him: his consultation area, which “had the harsh and anguished modernity of the rooms in paintings of Francis Bacon.” Such observations culminate in a withering evaluation of his person: “He was a man without charm, without ease, without conceit or vanity, and with a kind of excruciating, prodding, twitching honesty that was like an intractable skin disorder.”

This recent scene of incidentally poignant timing—the way it juxtaposes incisive cultural criticism with the trappings of psychological analysis—seems in retrospect like the sort of situation Malcolm herself, in her capacities as an admirer and practitioner of pastiche, might have borrowed from years ago then projected into the present to infuse it with meaning. But anyway, it happened that way, and her prose lingered in my mind. The following evening, which preceded the announcement of Malcolm’s death from lung cancer at 87, I was still reading The Impossible Profession, putting it away just before sleep and dreaming.

For a while now, Malcolm’s writing has been getting me out of all sorts of everyday trouble, and it was no different a few days ago. I turn to her often when I’m stuck on personal grievances, or my own writing, or haven’t read anything satisfying in months. In the margins of her books go notes on personality, first sentences of essays, hastily scrawled maps of my unconscious. Maybe it’s incongruous that this is the case given her reputation for being stylish, precise, quietly menacing, divinely fair. Surprising, too, given that her most famous lines warn her readers against letting a journalist into their homes, much less their hearts. Some of these lines appear in Malcolm’s best-known book, The Journalist and the Murderer (1990), which documents a reporter’s parasitic relationship with a subject convicted of an awful crime, and begins with her beloved dictum: “Every journalist who is not too stupid or full of himself to notice what is going on knows that what he does is morally indefensible.” In a 2011 interview with The Paris Review, Malcolm put the matter just as bluntly. “[Journalists] are certainly not a ‘helping profession.’ If we help anyone, it is ourselves, to what our subjects don’t realize they are letting us take.”

Malcolm’s professional mood is an incredulous one, which casts analysts as surgeons, journalists as scoundrels and thieves. Yet such speculations pale in comparison to the experience of sifting through her work, which has induced in so many a devotional obsession: Its overarching quality isn’t pessimism but perseverance, a peerless attention to surfaces that commits to every crevice, crack, and supporting beam of the human condition. Her interlocutors talk for far too long—sometimes because conversations that take place over the course of weeks are compressed into single encounters on the page, sometimes as a result of Malcolm’s talent for keeping her lips sealed as the interviewee gives and gives. Another unconventional convention of Malcolm’s reporting is her prominent position as a character in her own right. In almost all of her books, from The Silent Woman (1995) and Reading Chekhov (2001) to In the Freud Archives (1983) and Iphigenia in Forest Hills (2011), she appears as the prodigious sleuth, accumulating clues as a beach does shells. Like a novelist—or a therapist—she’s not leaving the room without a story, even if that entails returning to it dozens of times (her essay “Forty-One False Starts,” on the artist David Salle, is an ingenious distillation of this proposition).

Though Malcolm often appeared as a character in her own reporting, she was averse to making herself the focus of her dauntless investigation. In recent years, however, she finally did write movingly about the excavation of old family photographs, particularly her inability to integrate past versions of herself into the crystalline reporter she’d become (the critic Sarah Nicole Prickett pointed out in a 2019 review of Malcolm’s work that no images exist of her online as a young woman). “I don’t think of the child as me,” Malcolm writes of a portrait taken at 2 or 3, a couple years before her Jewish parents, escaping Nazism, moved with Janet and her sister from what was then Czechoslovakia to an apartment in Flatbush, Brooklyn. “No feeling of identification stirs as I look at her round face and her thin arms and her incongruously assertive pose.” She treats the photographs as an analyst would treat weekly sessions of a new patient: formal at first, then the memories begin flowing.

Though Malcolm wrote with extraordinary curiosity and stamina about literary figures (Sylvia Plath, Gertrude Stein, the Bloomsbury group) and court cases, it’s her personal and psychoanalytic writings that I have leaned on most often. The analytic and personal strains in Malcolm’s work seem intimately connected, but the nature of their relationship is elusive, unconscious even. Her father was a psychiatrist in the old country and in their new home. Often she has been asked in interviews about this fact and whether she’d harbored ambitions to enter the family business, to which she has given ambivalent answers. She’ll say on one occasion that she never considered it for one moment; on another that she would have liked to very much, but, alas, she has no aptitude for the mathematics required to get into medical school (the impossible profession, indeed).

After years of writing a monthly column on design called “About the House,” Malcolm’s first piece of long-form reporting for The New Yorker, published in 1978, was on various emergent theories of family therapy. In it, she wrote probably her first printed words on the experience of reading Freud: “One always has the sense of being in the presence of someone more honest, rigorous, and morally scrupulous than anyone else.” The phrase sounds as if it could describe Malcolm, too, or at least the version of herself she’d come to warn us later not to trust. 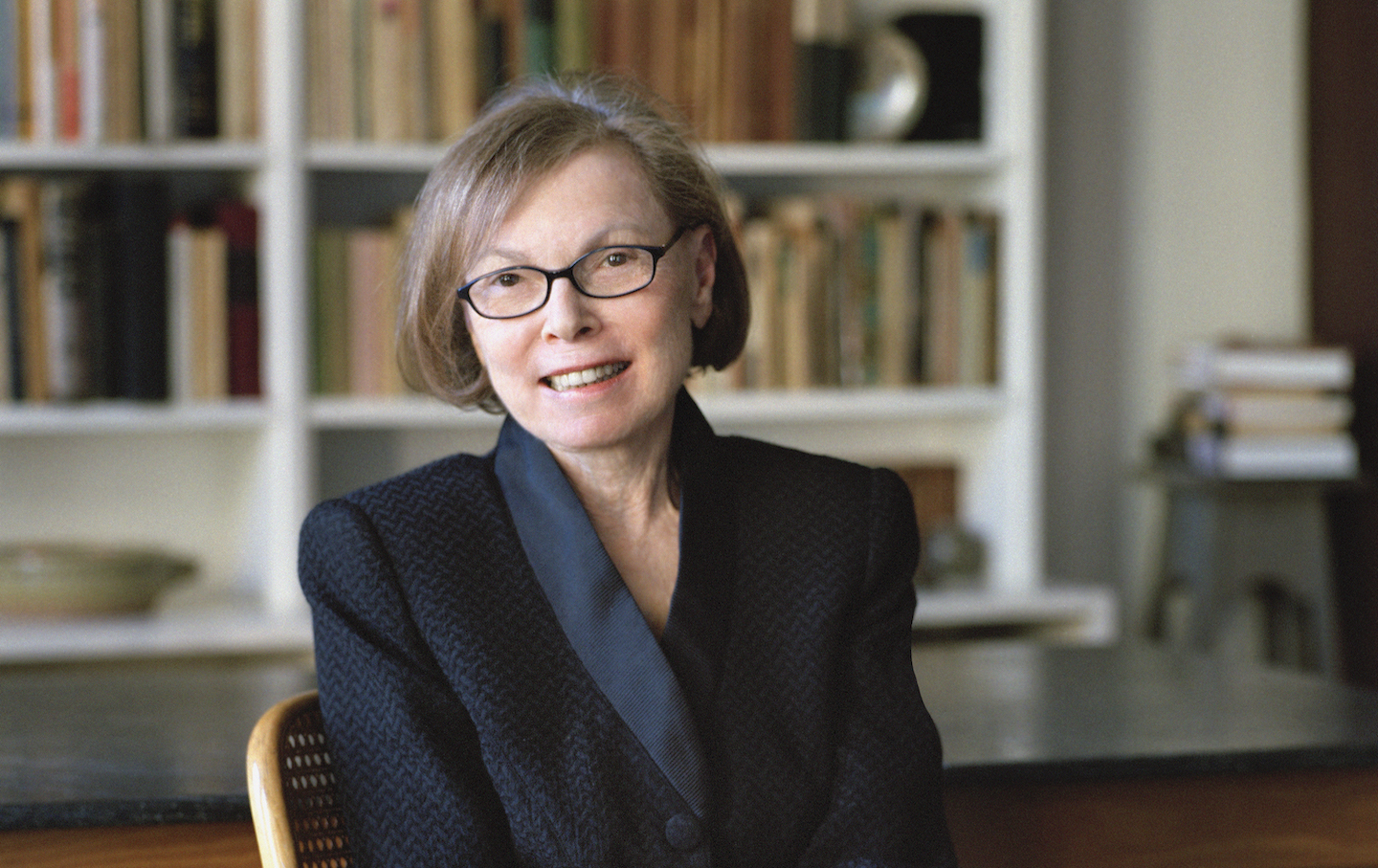 In the Freud Archives is Malcolm’s ode to rebellions of the mind, an examination of resistance to the psychoanalytic process that guides its disciples away from the “terrain of so-called objective reality to the uncharted wilderness of psychic reality,” which, Malcolm mysteriously posits, “is never overcome by anyone.” Its main character is a scholar named Jeffrey Masson, an “intellectual gigolo” who is excommunicated from psychoanalytic heaven (heir apparent to the father of psychoanalysis’s literal legacy, the Freud Archives), after he publishes controversial findings on one of Freud’s discarded ideas known as the “seduction theory.” This theory—that childhood sexual abuse is the true cause of neuroses—becomes, in Masson’s reasoning, the death knell for the entirety of the psychoanalytic project, an objective reality so piercing it shatters the unconscious on sight. “They are afraid I will destroy psychoanalysis,” Masson tells Malcolm of his detractors. “They are right to be afraid.”

In the Freud Archives is the book of Malcolm’s I’ve read most often over the years, and each time it’s taken on a different character. When I first read it I thought it was all about the void of truth, the sealed documents nobody properly reads, the cosmic joke of journalistic and academic access. Now I read into it with a more Manichean disposition. On one shoulder sits Masson claiming to be bored by everything, shifting with a restlessness from one field to the next, torching their sacred texts and practices as he goes grimly on his way. On the other is Malcolm, who sticks with Masson when he won’t even stick with himself, who judges the act of building to be “interesting, because it’s ultimately impossible.” Again, Malcolm perseveres: “It’s easy to see through something—to show how stupid it is, or how wrong—but that doesn’t take very long, and then you’re finished.”

Her first work on the history and practice of psychoanalysis, The Impossible Profession, proved to be less demonstratively dramatic but was in fact an even stranger book. In it, we meet the pseudonymous Aaron Greene, who has been training for his entire professional life to enter the “inner sanctum” of an institution he perversely despises. This is only one of many ways in which Greene is a carefully curated display of contradictions. He is a son of psychoanalysis, a strict devotee, by dint of which he’s to act as a father figure toward his patients, who are bound to regard him as a suitable lover (he sees erotic transferences everywhere). Malcolm amply demonstrates circumspection, but it isn’t so easy to cast off Greene as an object of ridicule, since—like Malcolm and unlike Masson—he has dedicated his life to his chosen experiment. Greene asserts that “the purpose of analysis isn’t to instruct the patient on the nature of reality but to acquaint him with himself,” and he assumes these responsibilities with the utmost severity, analogizing them over and over again to a surgical operation.

But Greene’s work isn’t like surgery, really; he has no experience stitching the patient up. Most of his analysands, after years of undergoing his so-called operations, get fed up and leave, or stop paying their bills, but none have ended in a manner Greene can reconcile himself to. Malcolm suggests that even analysts who do successfully manage to terminate some of their patients’ cases (or finish their books) are never capable of being done with the psychoanalytic process themselves, for they have made a home of their vocation, which is to be their legacy thereafter. “If the full experience of termination is a kind of existential rite of passage—a sojourn into the desert, a final stoical acceptance of the uncertainties of adulthood and the inevitability of death—then analysts never grow up and never have to die,” writes Malcolm, whose body of work was hardly ever immature even as it resisted any natural ending or summing up. How could someone who sits in the room each day—looking at faces until she had the words, boring into the page until characters coalesced—justify this interminable work? For instruction she consults the journal of the analyst Hartvig Dahl, who writes about his final session with a patient of six years. It is rare for an analyst of the sort Malcolm interviewed to display emotion in front of a patient. Many, like Greene, believe it occludes the sacred purpose of their work: to make the unconscious conscious. Nonetheless, Dahl writes, “I choked as I said goodbye, and for the first time our eyes met in a long look that we both understood.”