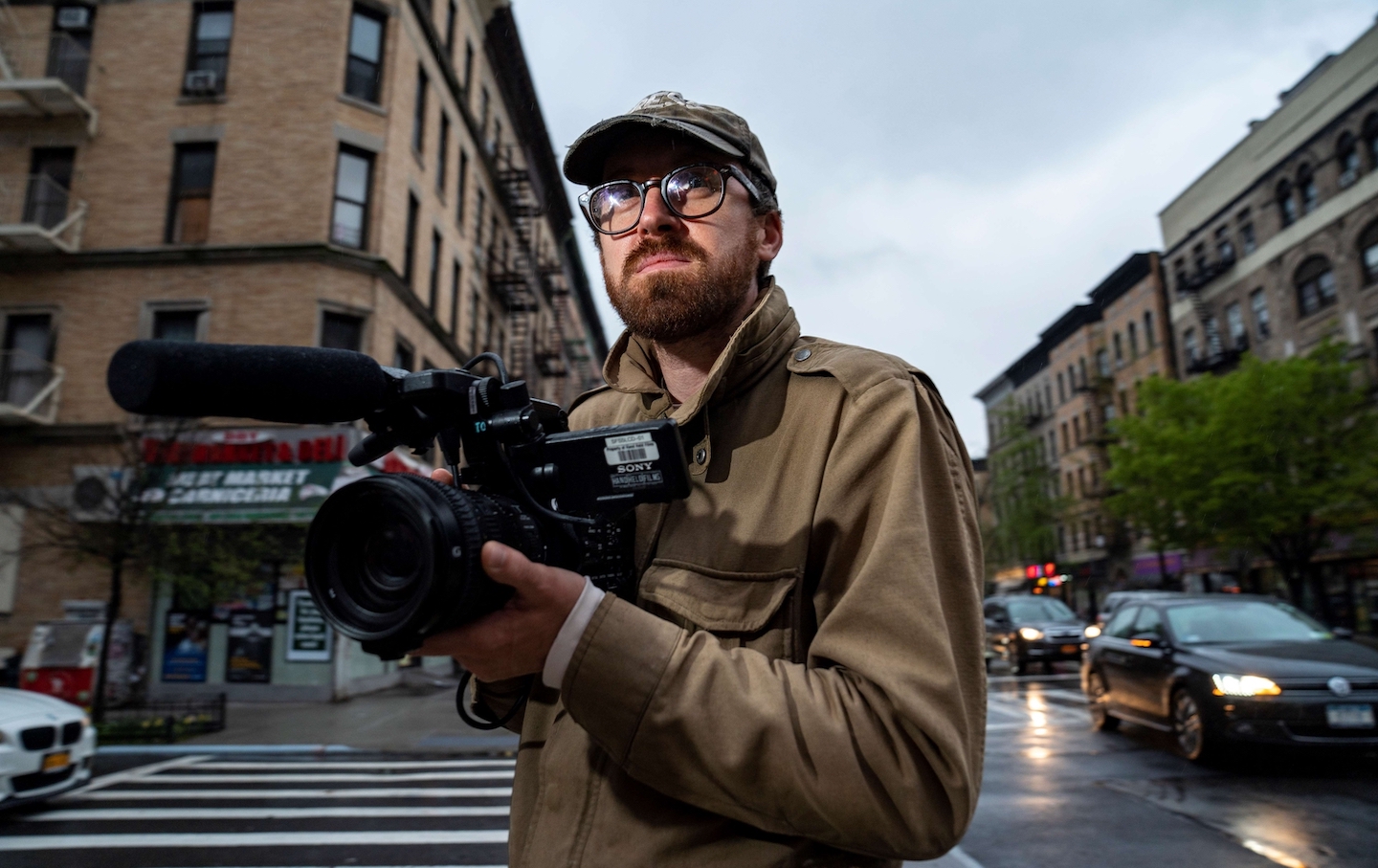 John Wilson rarely appears on-screen in his HBO docuseries How To… With John Wilson, despite being its star and namesake. When he does, he’s usually standing in front of a reflective surface like a mirror or a window, holding a camera, with his eye looking through the viewfinder, and staring straight ahead. The series documents his seemingly habitual need to film everything around him. He compulsively chronicles his life from behind the camera, observing his immediate surroundings and preserving an image of fluctuating New York neighborhoods. Wilson’s dual roles as a memoirist and archivist doesn’t typically place him in the frame, but his ubiquitous voice-over contextualizes and dictates everything we see. Eventually, some patterns emerge in Wilson’s footage: the piles of trash that fill New York’s streets, milling crowds circulating through Midtown Manhattan, NYPD officers either on the job or loitering about, and leashed dogs defecating on the sidewalk. But Wilson’s camera prefers to fix on people engaged in public in unguarded private moments, surrounded by strangers and with the specters of gentrification and urban renewal irrepressibly present. His gaze quickly becomes our own, and we see the world through his eyes, where seemingly everyone can be alone in a crowd.

Each episode of the docuseries follows Wilson as he ostensibly explains how to do something, like “Make Small Talk” or “Split the Check.” Instead of offering step-by-step instructions, Wilson uses the topic as a springboard to explore his pet interests, broadly staying on theme but rarely on task. The format of How To… remains consistent and familiar while allowing for maximum flexibility. “How To Improve Your Memory” starts with Wilson’s attempts to remember his grocery list, using the “memory palace” technique (a memory enhancement strategy that associates information with an imagined spatial environment) and ends with him attending the first ever conference on the Mandela Effect, where people share conspiracy theories about the origins of collective false memories, such as the spellings of popular brand names like Febreze (they remember it as “Febreeze”) and Oscar Mayer (“Oscar Meyer”). “How To Put Up Scaffolding” takes the form of a film essay that traces the history of the seemingly ever expanding presence of scaffolding in New York City and its role in an environment that’s forever under construction. In “How To Cover Your Furniture,” Wilson details his daily struggle to keep his cat from clawing his furniture, but it eventually transitions into a look at the anti-circumcision movement, culminating in an interview with a man who showcases his foreskin extension device. Wilson’s footage primarily dictates each episode’s structure and ensures that every installment feels distinct, so that How To… can be a memoir or a travelogue or an instance of observational cinema, depending on the material.

Wilson’s filmmaking instincts are generally comedic, with the humor in How To… assuming multiple forms. Sometimes it takes the shape of interviews with various local eccentrics eager to be on camera, somewhat similar to the material in Nathan for You, the former Comedy Central series from Nathan Fielder, an executive producer on How To… Other times, jokes lie in Wilson’s vocal delivery, especially its halting cadence (peppered with plenty of “uh’s” and split-second pauses), or his snarky descriptions of events, as when he describes a faulty Ronald McDonald float in the Macy’s Thanksgiving Day Parade as “Ronald’s deflating carcass…being pulverized in the middle of 42nd street while spectators watched in horror.” The comedy in How To… always works in tandem with its anthropological inclination. Unlike Fielder, Wilson doesn’t necessarily strive to create chaos, but rather observes the mundane absurdity that comes from living within chaos.

The show’s comedy mainly lies in cheeky juxtapositions between Wilson’s narration and his visual footage. In “How To Make Small Talk,” Wilson, in voice-over, remarks, “When someone opens up to you, you might feel the need to reciprocate out of politeness” laid over a scene of a fireman releasing water from a hydrant. When he follows that up with,”But this comes with a big risk because an exchange of feelings may cause you to be swept up in a relationship that you’re not prepared for,”we see a paper cup floating down the street in the pool of water from the hydrant. Visual puns proliferate in each scene of How To… and force the audience to make offbeat connections between sound and image. When Wilson mentions that he needs to pick up some broccoli from the grocery, we see a fallen tree whose leaves look like a broccoli head. When Wilson grouses that the city “still lets the pigs go wherever they want,” we see a man walking his pet pig behind two cops talking with each other.

Wilson developed his voice and aesthetic over the past decade through creating short films in the same vein as How To…, most of which are available to watch for free on his website. His short films and the HBO series can be enjoyed purely as a vehicle for funny found material or oddball interviews, but How To… clarifies Wilson’s artistic project as a special kind of examination of urban living. “How To Put Up Scaffolding” and “How To Cover Your Furniture” explicitly tackle the ways in which New York City makes daily life increasingly more inhospitable for its residents, whether it’s because they’re surrounded by unsafe construction, or are forced to deal with architectural modifications (like spikes on storefront ledges or high dividers on subway benches) that are hostile to the homeless. While Wilson clearly holds an affection for New York, judging by the plethora of sequences featuring adoring shots of the Manhattan skyline and outer borough neighborhoods, not to mention everyday New Yorkers, How To… isn’t some uncomplicated “love letter” to the city. Rather, it’s an implicit interrogation into the ways urban planning marginalizes vulnerable people, often in exchange for profit.

Apart from the urban critique, it’s the explicitly personal nature of his approach that sets Wilson’s series apart from everything else currently on television. This partly because we see almost everything from his perspective and his voice frequently rings in our heads. But it’s also because so much of How To… feels like it was pilfered from a home video collection that would seemingly exist with or without a show to broadcast it. We learn in “How To Improve Your Memory” that Wilson has kept a handwritten personal diary that lists everything he does every day for over a decade, and this preservationist attitude extends to his filmmaking. His HBO show feels like a natural progression of his DIY work, only with a scaled-up budget and a larger platform, which isn’t something that can be said about the myriad content options that populate streaming platforms. How To… is sui generis because it never gives the impression that it’s been engineered to fit the taste profiles of a given demographic. It looks and sounds entirely like itself, like something that John Wilson himself would watch.

The season finale of How To… features footage shot before and during the initial Covid lockdown in March, a time when people were stockpiling groceries and toilet paper for what we hoped was a brief period of limbo. The Covid-specific material Wilson shot has historical value, if only because he, being a one-man crew and taking on all the liability, could still operate a TV production when almost everyone else could not. Still, it’s telling that he doesn’t reach for grand statements and mostly filters his lockdown experience through his relationship with his sweet elderly landlady, with whom he watches Jeopardy! and sometimes shares dinner. Since she’s in precarious health, Wilson keeps his distance, despite living literally right above her, and acutely feels the separation. By intimately filming his own surroundings and relationships, he perfectly encapsulates the physical and emotional displacement that has become standard during this time. It’s this simple way of working that elevates How To… beyond the realm of mere comedy into something more meaningful: a diaristic art piece that reflects modern life through the prism of an everyday urban historian.