We are aware that a self-appointed would-be biographer, one Stephen Phillips, is embarked on a book on Christopher. We read his proposal and are dismayed by the coarse and reductive approach. We have no confidence in this attempt at the man in full. We are not cooperating and we urge you to refuse all entreaties by Mr. Phillips or his publisher, W.W. Norton.

Feel free to contact us with any questions as you may have.

What are we to make of this?

As I have never met, at least as far as I can recall, any of the principals involved—neither the deceased, nor his widow, nor Steve Wasserman, nor the “self-appointed would-be biographer”—my intervention here is purely as a biographer and historian.

There is no doubt that Christopher Hitchens deserves a biography—and a good one. The historical record of the times he lived in and commented on—acerbically, stubbornly, vibrantly, sometimes recklessly, in writing and in person, graciously or boorishly, but always with a magical, musical, majestic command of the English language—would be incomplete without one. But who gets to decide who shall write his life?

Some subjects, as diverse as Ronald Reagan and Philip Roth, choose their biographers during their lifetimes. (The Reagan choice didn’t turn out particularly well, for either subject or biographer; we still await the Roth biography.) Others give their living consent, when asked for it, albeit with strings attached. In 1981, George F. Kennan, then in his late 70s, agreed to cooperate with John Lewis Gaddis, with the stipulation that the biography be published after Kennan’s death, which both men assumed was on the horizon. Gaddis took on the assignment, began to research and write in the early 1980s, then moved on to other projects. “Poor John Gaddis,” Kennan remarked in 2003, “has seen his undertaking being put off for years while he waits for me to make way for it.” Kennan died in 2005 at 101; Gaddis’s biography would not appear until 2011, 30 years after he had secured Kennan’s agreement.

Other historical and literary figures, fearful of how their lives might be represented—or misrepresented—have gone out of their way to block any future biographers’ access by destroying everything that might be of use to them. Samuel Johnson, Charles Dickens, Wilkie Collins, Henry James, Thomas Hardy, and Sigmund Freud burned their correspondence and manuscripts. Freud was 28 when he lit his first bonfire. “I have just carried out one resolution,” he wrote Martha Bernays, whom he would soon marry, “which one group of people, as yet unborn and fated to misfortune, will feel acutely. Since you can’t guess whom I mean I will tell you: they are my biographers. I have destroyed all my diaries of the past fourteen years, with letters, scientific notes and the manuscripts of my publications…. Let the biographers chafe; we won’t make it too easy for them.” Needless to say, none of these gentlemen succeeded in thwarting their future biographers, of whom there would be many.

For many biographers, it is not their subjects but their widows, children, and literary executors—characterized by Michael Holroyd as “baffled and besieged tragic-comic figure[s]”—who, standing guard over the deceased’s reputation, pose the most immediate and immovable barriers.

Virginia Woolf, trying to understand why so many 19th century biographies turned out to be so dreadfully, ornately in awe of their subjects, blamed the widows. “Suppose,” she wrote, “that the man of genius was immoral, ill-tempered, and threw the boots at the maid’s head. The widow would say, ‘Still I loved him—he was the father of my children; and the public, who love his books, must on no account be disillusioned. Cover up; omit.’ The biographer obeyed.”

We do not know the full story of why Blue-Hitchens and Wasserman object to “one Stephen Phillips” as Hitchens’s “self-appointed would-be” biographer. They were quite possibly already sensitive and suspicious, and rightly so, after the publication of an earlier book about Hitchens which claimed, without any real evidence, that he was a bit of a hypocrite, less of a committed atheist than he purported to be, and on his deathbed “was weighing the costs of conversion.” Hitchens of course predicted that such would be said of him after his death and insisted that no one should believe such nonsense. Still, the book was written and respectfully received and reviewed—before being eviscerated by David Frum in The Atlantic.

In their widely circulated e-mail to “Family, Friends, Colleagues, Fellow Scribblers, Brothers & Sisters, Comrades,” Blue-Hitchens and Wasserman write that they were “dismayed by the coarse and reductive approach” in Phillips’s proposal. But proposals call for “reductive” approaches. And what is meant by “coarse”? They also call into question Phillips’s credentials and competency by referring to him as a “self-appointed” biographer, but aren’t most, if not all, writers of biography, fiction, history, and poetry self-appointed? 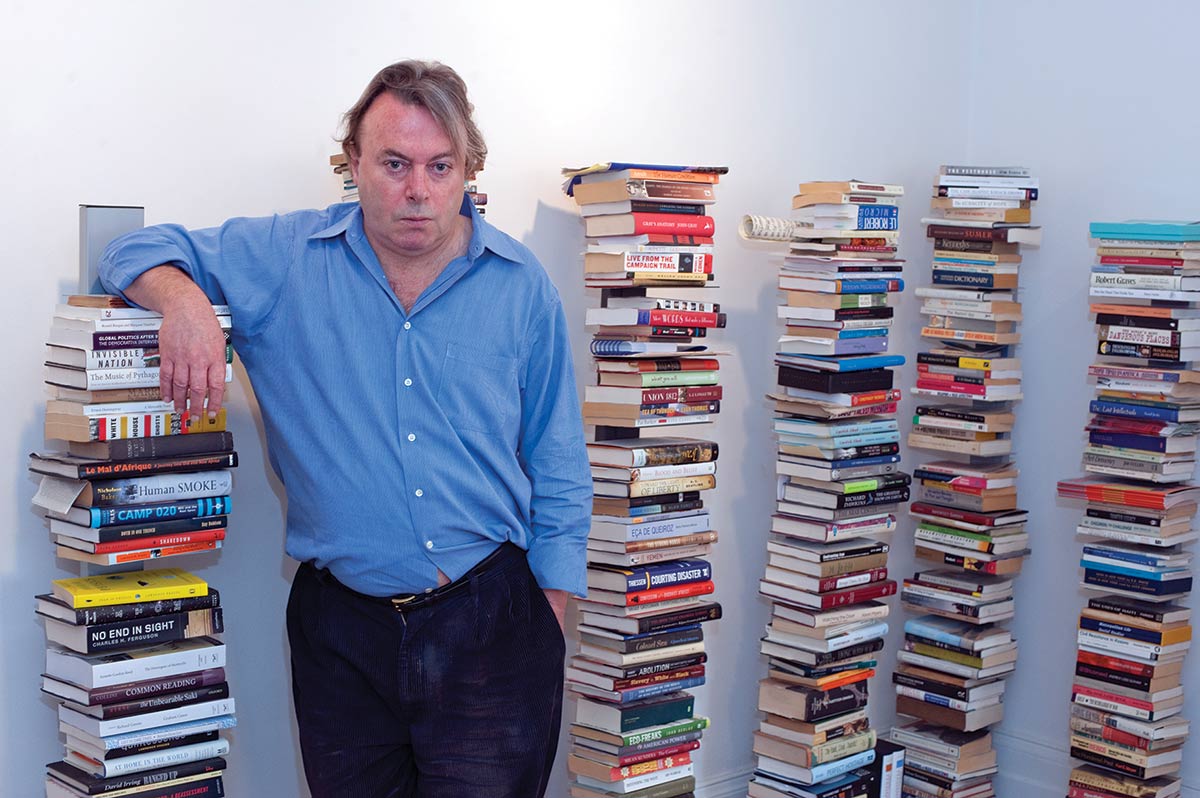 Literary leanings: Hitchens, a Nation columnist from 1982 to 2002, shown in 2010 with a small selection from his library. (Marvin Joseph / The Washington Post via Getty Images)

What we can infer from their refusal to cooperate with or respond to the “entreaties” of this “self-appointed” biographer and his publisher, W.W. Norton, is that they prefer a biographer who has been appointed, no doubt by them. In publicly discouraging the publication of a book that has not yet been written because they do not think much of the proposal, they are playing a zero-sum game. Either they will succeed in dissuading Phillips and Norton from moving forward or, more likely, the biography will be published and the publicity generated by their opposition will create the sort of buzz that marketers dream of.

The larger question is not whether they are acting judiciously, but whether their actions—and similar ones by other executors—do a disservice to those of us who wish the historical record to be as close to complete, as complex, as stirred-up and muddied as possible.

Hitchens does not belong to his widow or to Wasserman. His running commentary on American cultural, political, and social life; his enthusiastic—if sometimes, to my mind at least, unhinged—support for the American war in Iraq; his firsthand accounts of being waterboarded and getting a Brazilian bikini wax; his unapologetic, almost celebratory defense of his Brobdingnagian drinking and smoking; his unswerving insistence that “God is not great”; his friendships and feuds (serial and simultaneous); his incendiary and still-compelling indictment of Henry Kissinger; his takedowns of Bill Clinton (the “white whale”), Mother Teresa (“a thieving, fanatical Albanian dwarf”), the “Queen Mum,” numerous dictators and potentates, and Donald Trump, who, he conceded, though a “ludicrous figure,” at least had “worked out how to cover 90 percent of his skull with 30 percent of his hair”; and his final thoughts on being consigned to “tumourville” by the esophageal cancer that killed him stand on their own, but our understanding of what he said and wrote, and why, would be immeasurably enriched by a study of his life.

Because Hitchens wrote and said too much, too well, on too many subjects, it will be impossible for any single biographer to accurately or adequately fit his life into his times, and vice versa. Difficult as it might be for a biographer to admit, there is no such thing as a “definitive” biography. Every biographer captures a bit of the truth, never the whole. The lives we write are not the lives that were lived, but constructions, approximations, intimations. Biography is not an accurate reflecting mirror of a life once lived, but a distorting, fun-house one. And that is why the more biographies we have of an individual, the closer we may get to her or him. I have read many bad biographies in my day, but on reflection, even the worst of them told me something, not only about the subject’s times but about the writer’s, and about the passions evoked and controversies set ablaze by past lives, thoughts, words, and actions.

Blue-Hitchens and Wasserman are well within their rights to refuse to cooperate with this particular biographer, but by reaching out, as they have done, to so wide a universe of individuals who might have something to say on the subject, they are engaging in a sort of preemptive censorship, intended to frighten away not just this one writer but any others who might not, for one reason or another, pass muster with them.

We don’t get any closer to understanding a life and its times—which are our times—by restricting access to those who might wish to examine and interpret them.