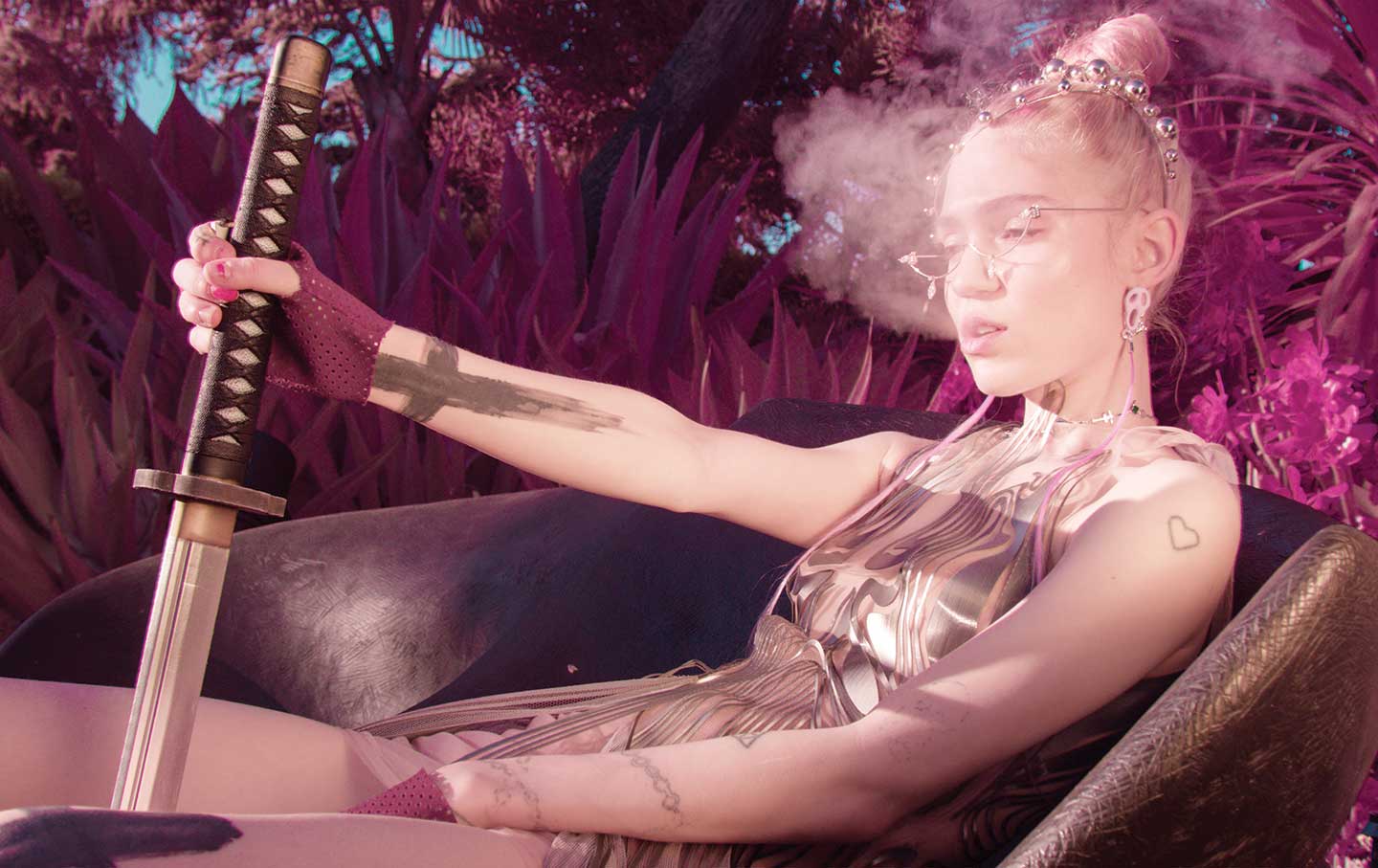 Claire Boucher, the Canadian artist and producer better known as Grimes, often makes music so manic, energetic, and lively, it feels animated. Her songs are hyperactive and kinetic—chemical electro-pop with a mind of its own. “Oblivion,” from her 2012 breakthrough album, Visions, sounds like a cartoon baby doll springing through the stages of a colorful video game. It’s easy to imagine “Flesh Without Blood,” from 2015’s Art Angels, blasting out of a top-down convertible driving across a psychedelic Candy Land. But on her latest album, Miss Anthropocene, released this year, Grimes trades brightness for anarchy. Brooding synths and beats as sparse as empty fields build into songs that are easily her most despondent. There’s a logic to the darkness here: On this record, she’s envisioned music for a planet obliterated by ecological disaster.

Grimes announced in 2019 that she was planning “a concept album about the anthropomorphic goddess of climate change.” To some, her out-of-the-box thinking and off-the-wall imagination could offer an original way to process the harsh and inevitable realities of global warming. Others were skeptical and even annoyed. The ground had been shifting beneath Grimes and her project for some time. Over the last eight years, she has gone from being an indie auteur to a contentious persona straddling pop stardom.

Outspoken, unpredictable, and contrarian, Grimes has challenged the narrative fans wanted to assign her as a beloved queen of DIY. She’d harbored more mainstream interests and ambitions, and the accusation that she’d sold out frequently and unfairly followed her as she navigated audience expectations and her more pop-driven impulses. The criticism extended to her politics; she’d been blunt about certain progressive causes, often pointing out gender disparities in music and appending “anti-imperialist” to her Twitter bio. But all of that fell under suspicion when she started dating Tesla’s CEO and cofounder, the billionaire Elon Musk. They announced this year they were expecting a child.

Upon its release, Miss Anthropocene quickly summoned a vast Internet din of gossip and criticism. As a concept album, it isn’t always easy to follow. Grimes’s ideas and characters carom off one another like uncontrollable ping-pong balls. But it’s an eerily catchy pop record, infectious enough to keep luring listeners back, despite the slightly garbled storytelling and her contradictions as an artist and a celebrity. While some of its solipsistic and absurdist turns are grating and even a little obtuse, they hit on a few unnerving truths about humans in the face of overwhelming disasters. At the core of Miss Anthropocene, Grimes captures a self-centeredness and bleakness that we can’t always escape in a crisis.

Throughout her career, Grimes has played up her maximalist inclinations with extravagant visuals that explode with movement, color, and cultural references. Her videos are loaded with blood-soaked characters inspired by Marie Antoinette and sci-fi experiments, dancers performing in Mortal Kombat–style balaclavas, scenic backdrops that evoke the sets of Mad Max, creative treatments that meld cyberpunk with Greek mythology and glitter. The aesthetic is brilliantly paradoxical—heady artiness and lowbrow camp—and it hints at the endless, eclectic pop culture Rolodex that she carries in her brain. But pain and trauma have often lurked beneath Grimes’s bubbly melodies. The opening lines of “Oblivion,” written about her experiences with assault, narrate the post-traumatic stress disorder and anxiety that linger after an attack: “And never walk about after dark / It’s my point of view / ‘Cause someone could break your neck / Coming up behind you, always coming / And you’d never have a clue.”

On Miss Anthropocene, she’s mastered this balance of harrowing themes and pop-driven touches. The sonic mood is generally foreboding, although the album’s hooks and choruses poke above the gloom. “Delete Forever,” a moment of grief driven by spiky acoustic guitars, is an example of when this works best. Grimes’s vocals remain crystalline as she sings a mournful chorus that, even in its somberness, has hints of buoyant ’90s alt-pop. The song was inspired by the opioid epidemic and the drug overdose of rapper Lil Peep, and its lyrics (“But I did everything, I did everything / More lines on the mirror than a sonnet”) are despairing, especially as she delivers them with chillingly tender emotion. Yet at the end of the chorus, she adds a cheerful yelp of “Woo!” tempering the sentimentality and capturing the broad and multilayered ways she engages with our grim world.

Grimes often turns the lens back on herself. The album’s titular character is supposed to be a “space-dwelling demon / Beauty queen who relishes the end of the world,” but she also reads as a stand-in for Grimes. “So Heavy I Fell Through the Earth,” the atmospheric opener, conjures images of the planet in free fall, although Grimes said in an interview with Apple Music that she wrote the song about her pregnancy. “It’s this weird loss of self, or loss of power or something,” she explained. “Because it’s sort of like a future life in subservience to this new life.” The glitchy standout “You’ll Miss Me When I’m Not Around” tells the story of a suicidal angel, but lyrics like “If they could see me now, smiling six feet underground / I’ll tie my feet to rocks and drown / You’ll miss me when I’m not around” hint at her tortured celebrity and her frustrations with the criticism to which she’s been subject. “It’s sort of about when you’re just pissed and everyone’s being a jerk to you,” she said in an interview. 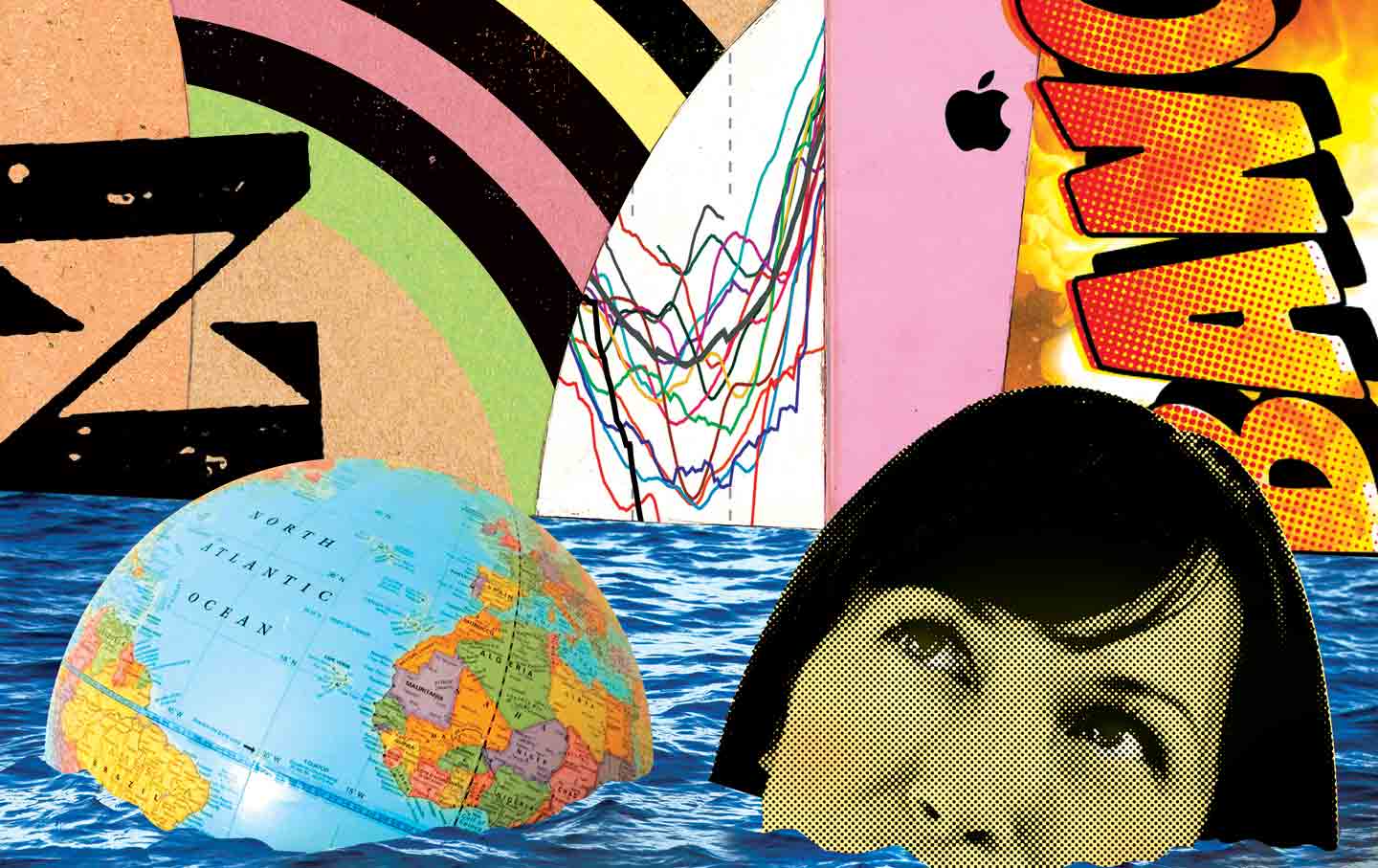 Grimes’s conflating global crises with the public scrutiny of her career strikes a note of shallowness, as does her expressed desire to make “climate change fun.” The approach is somewhat defensible if you’re familiar with how she mixed camp and darkness in the past, but it’s undeniably tone-deaf. As part of the album’s publicity cycle, billboards for its release announced “Global warming is good”—purportedly meant as an absurdist demonstration intended to shock people into paying attention. “When I saw it, I was like, ‘Oh, fuck no, this is a huge mistake,’” she told Pitchfork recently. “Then I was like, ‘Wow, this is so scary that I think we should probably put it up.’ The goal was to have less advertising and more public art.”

The problem is that the billboards are, at the end of the day, advertising for a new album by Grimes, who is now having a child with the 19th-richest person in the world. Certainly, artists should be grappling with the climate crisis in their work, and a celebrity platform, some might argue, should be used to amplify the warnings of rising temperatures and ecosystem collapse. But scientists have pointed out that the climate crisis highlights and exacerbates economic inequality on an already unequal planet. It isn’t a great equalizer that will unite us in tragedy; its effects will be felt, first and most drastically, among the most vulnerable and impoverished populations around the world. In most circumstances, bringing Grimes’s personal life into a discussion of her art wouldn’t seem fair, but the context is impossible to ignore when the entire premise of the album is tied up in questions of global inequality. Perhaps against its own intentions, Miss Anthropocene mirrors a larger question of popular artists blurring the lines between activism and entertainment—and of how serious the alarm bells sound when they’re ringing from the peaks of celebrity and privilege.

In the midst of a pandemic marked by isolation and angst, Miss Anthropocene takes on a different meaning, and even some of Grimes’s off-putting artistic choices make sense in this new light. The decision to frame humanity’s doom around her experiences in songs like “You’ll Miss Me When I’m Not Around” and “So Heavy I Fell Through the Earth” coheres a bit more; it’s difficult not to tally the personal costs and filter communal disaster through one’s existential despair, although for most people, this probably happens only in private.

But Grimes isn’t afraid to reflect our ugliest habits. Though the album was written some time ago, she sharply invokes the rage and cynicism that have become rampant in the past few weeks. The acidic pop song “My Name Is Dark” is an ode to the unavoidable nihilism that rears its head when things appear hopeless (“I don’t need to sleep anymore / That’s what the drugs are for,” she sings between background screeches). “Violence” is a portrait of blind rage, while the staticky synths on the prescient “Before the Fever” feel like a deadly lullaby encouraging humans to submit to their fate.

Miss Anthropocene isn’t always coherent, but neither is our moment. On “IDORU,” Grimes ends the album by painting an idealistic picture of the future. She weaves in samples of birds chirping and dreamy synths that sound as if they’ve been piped in from a better place. “As my fingers tremble / This is who I am,” she sings earnestly. Grimes hasn’t actually clarified who she is, yet you want to believe her. And though the song is unsettling, when it ends, it’s good enough to make you hit Repeat.