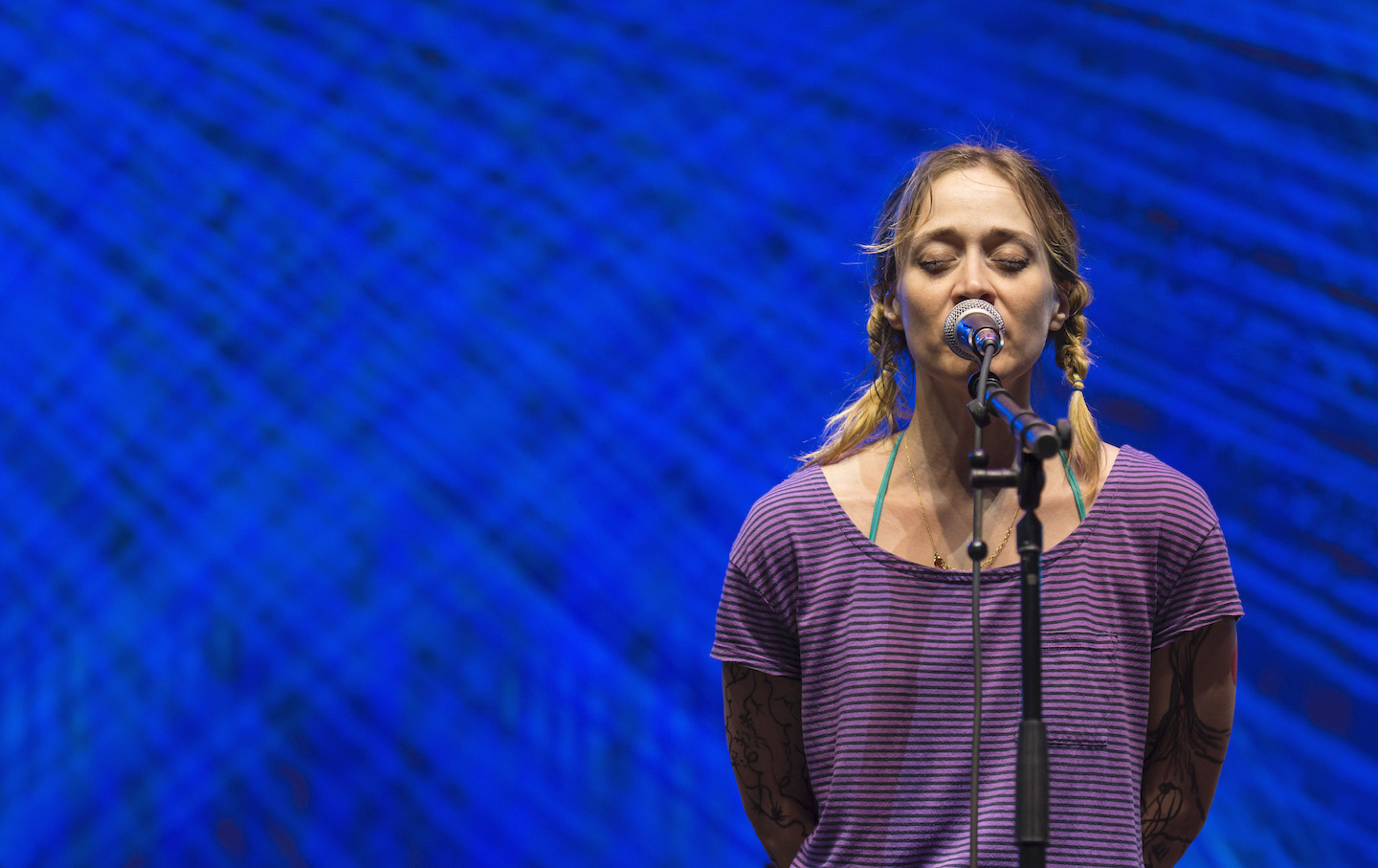 The first time I heard Fiona Apple, all she had to say for herself was that she’d been a bad, bad girl: “Heaven help me for the way I am / Save me from these evil deeds before I get them done.” “Criminal” sounded like the pop hit it became in the 1990s, an introduction not to a person but to a persona. The manufactured image (wary chanteuse for that heroin chic micromoment) was subverted by the artist’s innate ability: that beyond-her-years contralto, lyrics that unwound with an unpredictable logic. Her debut, Tidal, released in 1996, is juvenilia—she was 18!—and if Apple has spent the ensuing years racing away from that persona, she’ll never outrun it, nor should she wish to.

At her most creatively fertile, Joni Mitchell (it’s required when talking about a genius woman musician to summon her) released a masterpiece a year from 1974 to 1977. Apple is no less urgent or searching, but she needs time. Three years after Tidal, there was When the Pawn… (the full title a long poem), then 2005’s Extraordinary Machine, then 2012’s The Idler Wheel… (the full title is 23 words), and now, eight years on, Fetch the Bolt Cutters.

One cannot chart this rake’s progress by an album’s evolving concerns, because those do not change for her. The albums are soundtracks, with a meaning particular to the person listening. Her fans’ feelings about the work have to do with the moment at which they found it. Because Apple is always reassuringly herself. The jaunty piano, tamed with aplomb; that voice, less sweet with age and maybe the better for it; lyrics that look like middling verse—something my teen self would have inscribed on my history notebook—but delivered with brio. Take “Extraordinary Machine”:

I seem to you to seek a new disaster every day
You deem me due to clean my view and be at peace and lay
I mean to prove, I mean to move in my own way and say
I’ve been getting along for long before you came into the play

You need to hear it—the staccato, show-tune-y delivery, the way she lands on the rhymes, including that embedded “way,” then gives that last contraction a pretty little flourish. And that “I” is key. In the mature albums (those last three) Apple is not contrite for being a bad, bad girl; she wants to reveal the more complex truth.

“I know I’m a mess he don’t wanna clean up,” she sings in “Paper Bag.” “I’m a frightened, fickle person / Fighting, cryin’, kickin’, cursin’ / What should I do?” she laments on “A Better Version of Me.” “Oh, when I try to love / I can love the same man in the same bed in the same city / But not in the same room. It’s a pity,” she sings on “Left Alone.” I think we misunderstand this as confessional, as we often do with women. Maybe “autofictional” is the word we want—Apple burnishing the stuff of her life into art. Still, the excitement that attends the arrival of Fetch the Bolt Cutters is the frisson of seeing an old friend.

A recent New Yorker profile explained that the title was borrowed from a cop show, but its meaning is clear: “Fetch the bolt cutters, I’ve been in here too long.” You must take Apple at her word. She is ready for liberation. But there’s a disconnect, the lamentation of being silenced from an artist who has, for half her life, so publicly articulated who she is. Maybe she means it this time, or perhaps she had never said what she meant. Or this is the persona she (and we) are most invested in. This is the Apple we demand to see.

Thematically, Fetch is familiar. The unruly woman (“Kick me under the table all you want / I won’t shut up”), negotiating the line between idiosyncrasy and mental illness (“People like us, we play / With a heavy balloon / We keep it up, to keep the devil at bay, but it always / Falls way too soon”), with so much love to give (“When you resist me, hon, I cease to exist, because / I only like the way I look, when / Looking through your eyes”). She’s that friend: the oversharer who tells a great story, the unlucky in love who’s always willing to give it another shot, the wicked gossip who makes you laugh but whom you respect and fear in equal measure. It’s wonderful to be back in her company again.

But musically, Fetch astonishes, the work of an artist absolutely confident in the experiment she’s conducting, her objective aligning happily with the listener’s pleasure. This is a true rarity, the artistic advancement that offers joy or surprise or comfort. (I thought of Mitchell’s The Hissing of Summer Lawns or Björk’s Vespertine or David Bowie’s Station to Station.) The album’s tactics—heavy beats, cut-and-paste vocal play—might frustrate some who prefer Apple’s earlier work, waltzy and cutting.

Apple’s ambition is evident from the opening—Casio drum!—of “I Want You to Love Me.” The jokey beat ripens into a lush cascade of piano, and the admission, “Next year, it’ll be clear, this was only leading me to that, and by that time, I hope that you love me.” It could be the ballad at the center of a Broadway show’s first act, but it is not. Drums thunder; Apple’s voice grows thin, out of breath, then resolves into a Yoko Ono chirrup.

The drums are a portent. We’ve heard this before, notably on “Hot Knife,” from The Idler Wheel, mostly timpani and the artist’s voice. Instead of teasing and flirting, this record pulses and lives. Sometimes the drums are rollicking (“Shameika”), sometimes martial (“Relay”), sometimes jazzy (“Ladies”), sometimes manic (“For Her”). Of course, the piano, with which Apple is most associated, is but a different kind of percussion instrument.

Her vocal ability has not changed, but Apple is less diverted by singing prettily. (She does that, too. “Under the Table” and “Ladies” show her at her most polished.) But throughout, she explores. She layers her vocals over one another, so they echo as long-distance phone calls once did. She lets them trip almost out of sync with the music or blur into abstraction. (“Relay” closes with a spectral postscript, “I used to go to the Ferris wheel every morning just to throw my anger out the door.”) Indeed, sometimes she’s more speaking than anything, as on the title track, which eventually lifts into homage to Kate Bush. “I need to run up that hill,” she declares, “I will, I will, I will, I will.” Then her dogs start barking—the hounds of love, so to speak.

There has always been a discomfiting intimacy to Apple’s albums. She’s so unguarded, telling us all these things we believe to be about her. Here, that quality is underscored by the record’s rawness; it sounds like an album made at home, which it was. It’s not just about the pet sounds (those recur, which some people will find charming): You can sense the space around the performers, and you feel like a lurker or eavesdropper. Childlike handclaps echo in a room you can picture if you close your eyes. You can truly hear Apple’s voice, when it’s being pretty and when it’s being human.

Apple’s particular magic is in her lyrical ingenuity and how her nimble phrasing manages to get to every word, racing the percussion but not taking all her breath. She’s an extraordinary lyricist, with a flair for odd detail. In “Shameika,” her paean to a maybe-bully from her school days, Apple sings, “In class I passed the time / Drawing a slash for every time the second hand went by / A group of five / Done 12 times was a minute / But / Shameika said I had potential.” It tumbles out of her with its own strange logic.

She sings a coy taunt to a lover—“Check out that rack of his, look at that row of guitar necks / Lined up like eager fillies, outstretched like legs of Rockettes.” Then she twists this: “They don’t know what they are in for, and they don’t care, but I do / I thought you would wail on me like you wail on them / But it was just a coochie-coo-coups.” There’s a maturity here, or maybe I’m wrong; that New Yorker profile pointed out that Apple’s lyrics might contain snippets written in her youth, as with the refrain from “Relay,” “Evil is a relay sport, when the one who’s burned, turns to pass the torch.” Not too shabby for a kid of 15.

But she’s not a kid anymore. Apple at 42 can reclaim an old insult, marrying it to one of her assets: “I’m pissed off, funny, and warm / I’m a good man in a storm.” That is exactly why we adore her. The best song here (perhaps in her entire oeuvre) is the first. Loud, naked, confident, it is the artist not as prodigy but as genius. It’s only the title—“I Want You to Love Me”—that rings false. By now, Fiona Apple should know that we do.