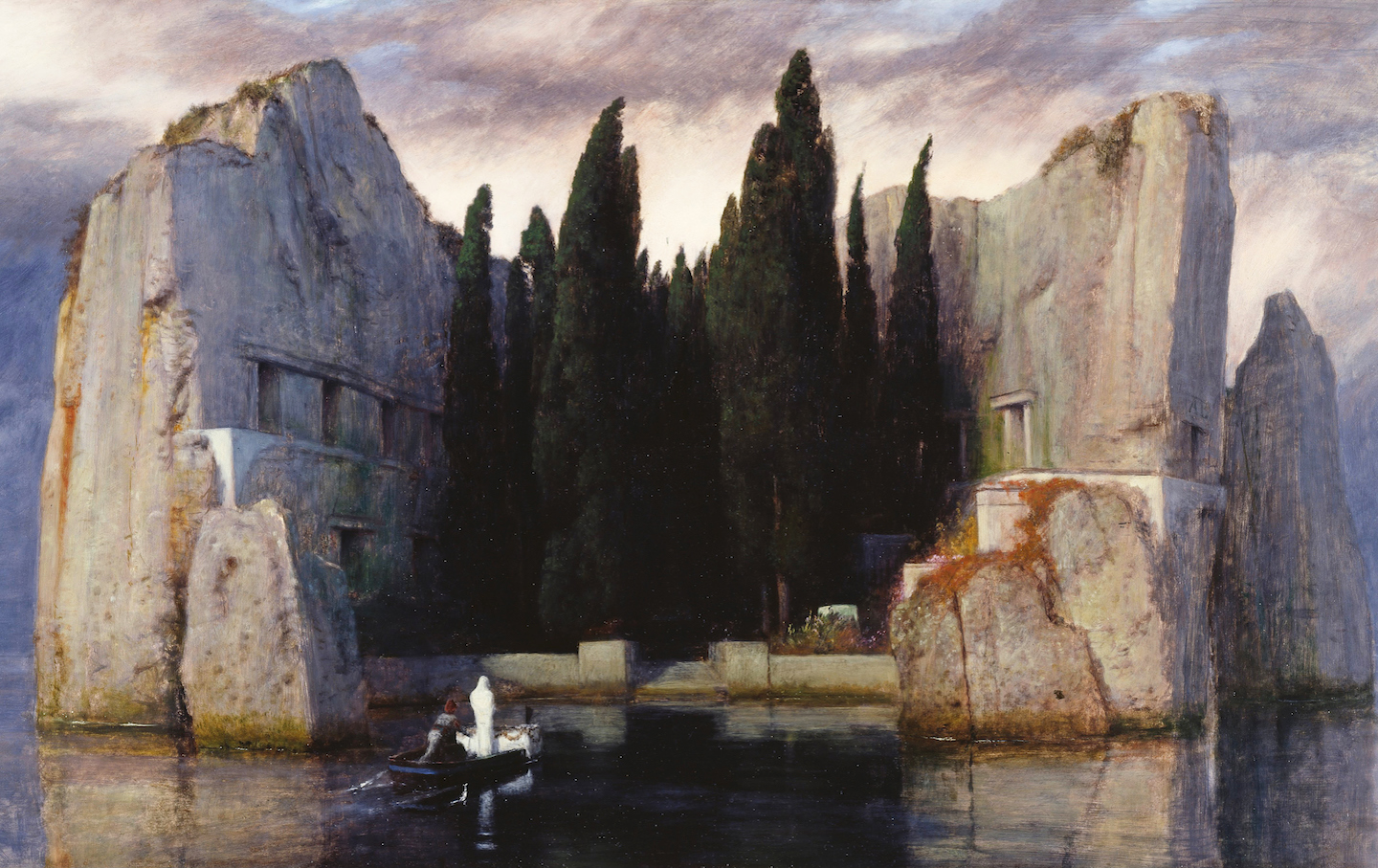 Arnold Böcklin’s The Isle of the Dead, 1883, at the Alte Nationalgalerie, Berlin. (Photo by VCG Wilson / Corbis via Getty Images)

When I was 20, because I was beautiful, I thought I would never die. Now I watch myself age in the mirror. It is a perverse habit, utterly mundane and sometimes a delight: I notice a new line in the corner of my eye, the deepening of a crooked scratch across my forehead. At times I find these features handsome; in other moments, they make me sick. Here I am, both subject and witness to nature, powerless to intervene or object to its transformations. Because I have stopped resisting this process (no $100 eye creams), I have started instead to fall in love with it.

Although she wises up much earlier than I did (in childhood, at the time of her father’s passing), this same fatalistic narcissism drives poet Diane Seuss’s latest collection, frank: sonnets. She begins contemplating suicide, looking out over a cliff. This is an unsettling place to begin a collection of poems—sonnets, no less—but no matter how irreverently told, this is a love story, one in which Seuss traces the most peculiar of companionate relationships: her own life, ruthlessly courted by death.

And what is this life? Who is Diane Seuss? Professionally, she is the author of four prior collections of poetry: It Blows You Hollow, Wolf Lake, White Gown Blown Open, Four-Legged Girl, and Still Life With Two Dead Peacocks and a Girl. She is the recipient of a Guggenheim Fellowship and has been a finalist for both the Pulitzer Prize for Poetry and a National Book Critics Circle Award; more recently, she was given the John Updike Award by the American Academy of Arts and Letters. She has taught for years at Kalamazoo College in Michigan and at Colorado College. She has been anthologized and published widely, and the Los Angeles Times has hailed her work as “some of the most animated and complex poetry today.”

But the Seuss I find interesting is the one whose personal life is parsed throughout the course of frank: sonnets—the one who was once a girl growing up in small-town America, where “all the dogs were named Pee Hole,” a student among kids “who didn’t [sparkle],” a child who lost her father, a transient youth who grew up to be “a beautiful dick” in “New York’s literary scene,” a “writer named anonymous,” a bride “making a fatal mistake,” a mother who “held [her] living son in the pieta pose” after he “overdosed and nearly died.” What I admire is her character and willingness to observe that which is hard to look at. In frank: sonnets, Seuss transforms “tragic spectacle” into something beautiful, visionary, “revolting and grand.”

This collection is a catalog of contradictions. Seuss is vulnerable and direct in these poems, but she’s never naive and certainly not stupid, though she occasionally calls herself so. We understand this as posturing: She’s disaffected initially, though her affect slowly dissolves into increasing tenderness until she turns, all at once, decidedly amorous. It appears, as we make our way through these sonnets, that life has stripped her of her defenses—she surrenders eventually to death’s numerous charms, to a specter who is “kinky, but in the most earnest, heartfelt way” and “kisses wet and sweet.”

As the text progresses, her references become increasingly Catholic, even devout—with visions of “Jesus, the most daddyiest daddy-man of all,” and incantations of the names of saints—which reads as a quest for absolution, salvation, direction, and grace. She also invokes the iconography of mid-20th-century America both in sarcasm and in earnest (think Dorothy Allison)—nostalgic for a time when kids “[sat] on the corner eating cracker sandwiches, a four-square of saltines between two slices of white bread spread with yellow mustard,” and for “soggy Tupperware bowls of sugar cereal” and “Little Debbie filling smeared on the couch.”

Nationalism becomes its own sort of religion in this text, embellished with its heroes and strange symbolism, too. America’s gods include Elvis and “young hung TV cowboy[s]”; its plagues and pestilence are addiction, chickenpox, hepatitis C, and AIDS. Through these pictures, Seuss relays a girlhood of abject poverty—adjacent to scenic destinations like Satan’s Inn, Cemetery Lane, and Fuckerson Park—but embellishes all this elegance and abundance into them. “Fascism in America is loud,” she writes, mere poems away from when she steps “barefoot on a rusty nail” and “now…know[s] how Jesus feels.” These memories make us wonder: Could America be heaven? Could it be hell? (The answer to both, of course, is yes.)

Underlying this inquiry are the politics of sex, an exchange rarely pleasurable in these passages. Seuss depicts aging as a horror unique to femininity, one she traces from childhood into maternity through the process of her body’s ripening and rot. She narrates her abortions, her son’s birth, her own experience in utero, her C-section, her disability, a proxy: her unspayed dog’s periods when she was made to run around in bikini bottoms padded with Kotex. Seuss admits, at some point, that she “took a turn and made [herself] appalling” in defiance to men who “[weaponized] the word beautiful.” Her self-awareness here—her manipulation—challenges patriarchal notions of femininity, in which women are always either whores or bitches or damsels or mothers or virgins. But Seuss is constantly contending with all of these labels at once—the women whose bodies she writes about are perpetually signaling fertility at the same time they foreshadow decay.

Because “none of it! none of it will last!,” we can take frank to be a studied investigation into attachment and release. The book answers Louise Glück, rhetorical in The Triumph of Achilles: “Why love what you will lose? There is nothing else to love.” Seuss takes this inquiry a step further and asks: Is anything ever lost once you’ve kissed it? And for this we have no answer, so at the end is mystery.

This tendency toward contradiction perseveres—the way Seuss writes is at times abrupt and devastatingly severe, and still unflinchingly romantic in every awful sense of the word. In other moments, she is languorous, self-indulgent, a critic: Fuck all the famous men, and punk, she claims, is sexist. She champions blues and jazz instead as the pinnacle of radical and disruptive art—I assume, then, that we should understand these poems and their own defiant rhythms as a continuation of this rebellion. Like other feminist meditations on memory, loss, and grieving (Maggie Nelson’s Bluets comes to mind, as does Anne Carson in “The Glass Essay” and The Art Lover by Carole Maso), these poems also unsettle formal conventions of genre: They are sonnets, but only insofar as they are called such and restricted to 14 lines. Seuss periodically interjects her self-awareness of this disruption—literally writing “iambic pentameter” instead of using it, or invoking classical meter in the music of people’s talk and everyday patterns of speech.

Throughout the text, Seuss repeatedly assesses the failures of language or else is totally irreverent toward it. Poetics excuses this somewhat: “What I called violets was really petrified chicken shit,” she writes, and so they do become. She recalls a preverbal part of her life, “free of signification,” which we understand as a sort of Garden of Eden, a priori to the knowledge of the apple, where she is granted complete freedom from symbolism, destiny, and predetermination and is left just to feel things. But then she spends the rest of her life captive to language anyway.

In contrast, Seuss writes plainly about her son in a section startlingly sincere, both of them candid after surviving their respective overdoses. Here I break away from the manuscript and cry—these are frank, ordinary conversations; they are not dressed up; there are no tricks or frills. Their talks are just as funny and unpretentious as the calls I make to my own mom and dad. Each party speaks unencumbered as the other listens. We understand this process as metaphor; language becomes a tool. And while language once alienated Seuss, she acknowledges that it is uniquely equipped to connect us, too.

Perhaps this is the reason I am so struck by Seuss’s work here: I admire writers who live as a comet, shooting by with “nothing left to lose.” You can’t make it through these poems and not be affected. They gesture around at the art of everybody’s lives.