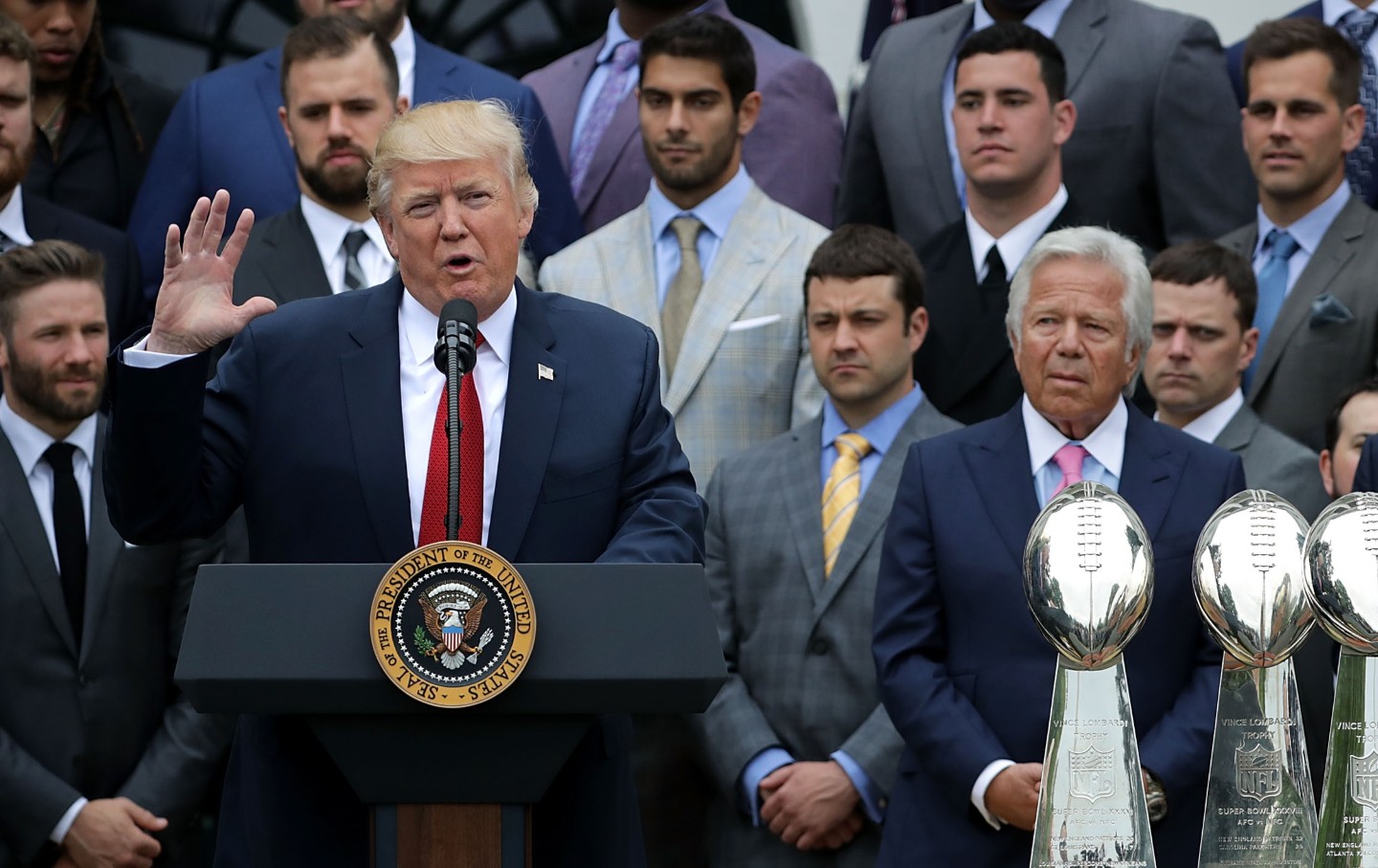 With the reckless force of a runaway train, the NFL is preparing to reopen this fall. The teams have released their schedules. The league is scheduling minicamps. It is reopening facilities. This is all happening, of course, in the context of an ongoing pandemic that shows no sign of slowing down.

The titanic forces pushing the NFL to open its doors are coming from all angles. The franchise owners want their billions of dollars in television revenue. The television networks are anxious for the games to be shown, as NFL games are the highest-rated programming, year in and year out. The 24-hour sports networks are desperate for content, as they currently are straining to fill the hours with tired debates about players past.

Then there is Donald Trump, the person who turned football into another tired culture-war trope with his attacks on quarterback Colin Kaepernick and any other player who dared take a knee during the anthem to protest racial inequity and police violence. Trump wants the NFL open by any means necessary because it is yet another opportunity for more divisive culture wars around the closest thing this country has to a secular religion. He wants the terms of debate to be those who want football back vs. those who don’t, because that is an argument that he believes he will win.

Trump knows that the return of football will be a signal that “normalcy” is returning. Conversely, if football isn’t back, it will be yet another unsettling signpost of just how deeply he has mangled this nation’s response to the coronavirus. If we’d had a national plan of widespread testing and contact tracing, we could have had football back in a way that would have satisfied fans and cautionistas alike. But he didn’t, so we cannot.

This all ties together when we examine the number of NFL owners who have given millions to Trump’s presidential aspirations over the years. They did not want Donald Trump to be a fellow NFL owner, but they have no problem with him as their president. The political and financial interests are combining to make the NFL’s return a fait accompli.

But this plan ignores the health of those who actually have to play. The only people who have the power to pump the brakes on this mad project are the players themselves and their union, the NFL Players Association. This is difficult to envision. Players in the NFL do not have fully guaranteed contracts and the average career lasts just over three years. With the exception of a few select stars, players are seen as eminently disposable. If they don’t show up to play, someone else will. As players joke among themselves, NFL stands for “Not for Long” or, in a league that is 70 percent African American, “N____ for Lease.” In addition, they risk their brains on the field every week. The idea that they won’t also risk the coronavirus beggars belief.

It’s possible that a minority of players, the socially conscious ones who just last week signed a letter calling for justice for Ahmaud Arbery following his murder in Georgia (a letter signed by, among many others, quarterback superstar Tom Brady), will raise their voices in dissent. These players should hold press conferences alongside their families and ask the hard questions like, “In a sport that has flagrantly disregarded the health of players, what is the plan to keep us safe?”

Granted, the majority of fans probably will not care. As we saw when Kaepernick took his knee, many football fans want the players with their helmets on and their mouths shut. When the humanity emerges from beneath their uniforms, people just can’t take it. And with the current stakes, “shut up and play” will become “shut up and die.”

If players decide to push back on the rush to return to the field, they will be in for a fight. But it could also move public opinion just enough to force the kind of conversation that Roger Goodell and the NFL are clearly loath to have: one about whether the safety of the players, the coaches, and the various medical staff are being flagrantly disregarded for money, politics, and expediency.