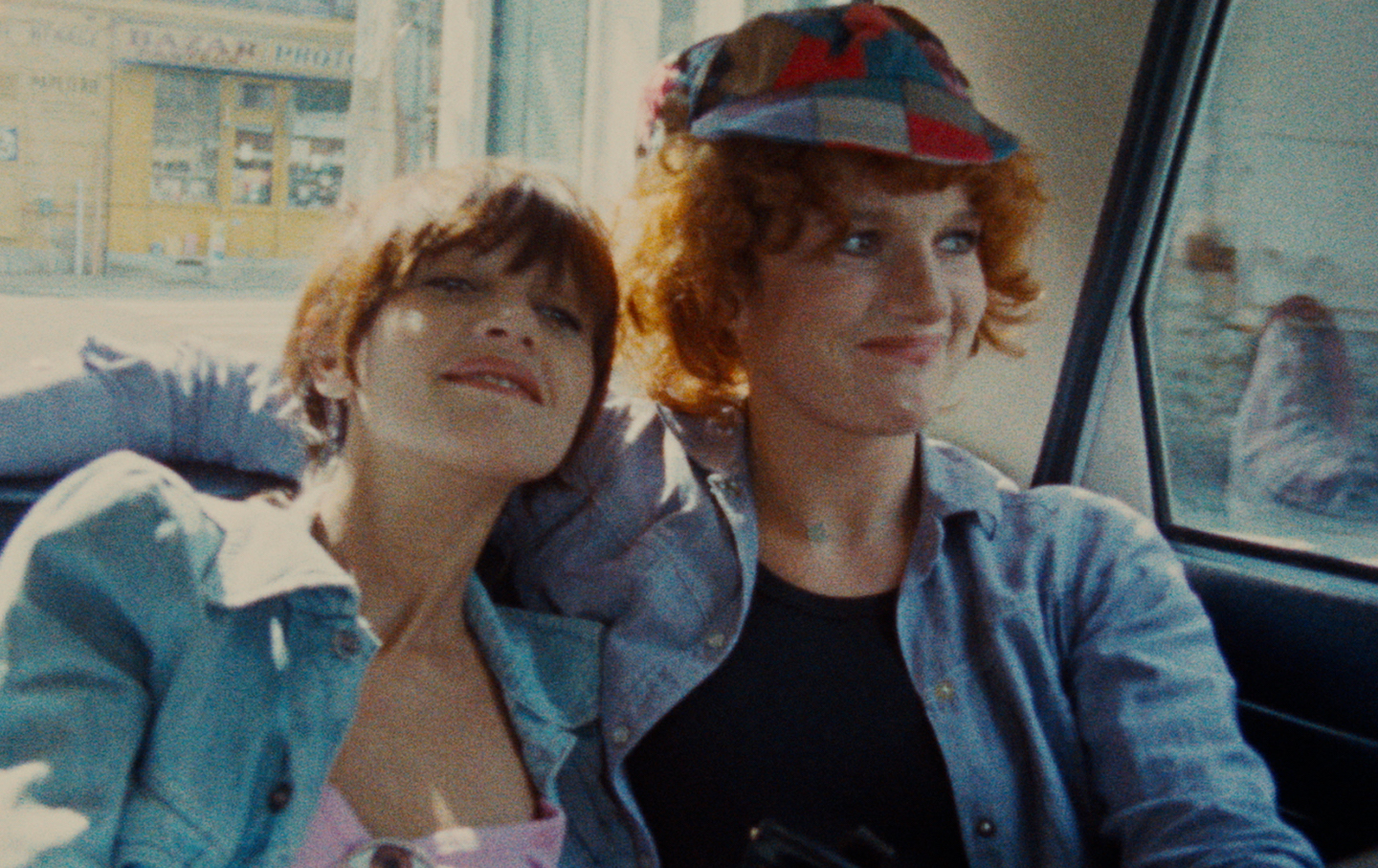 (Courtesy of the Criterion Collection)

In the soft light of what looks like early morning or the fleeting minutes before sunset, a woman stumbles out of a brick-walled, vine-covered house and struggles to find her footing. Her friend, sitting on the front steps, catches her and ushers her into a cab. It’s a familiar image of female camaraderie, but in Jacques Rivette’s Céline and Julie Go Boating, from 1974, familiar feelings emerge from otherworldly contexts.

The stumbling woman is Céline (Juliet Berto); her friend, Julie (Dominique Labourier). This moment comes at the halfway mark of the sprawling 193-minute film, where, in the previous scenes, we’ve followed the daily lives of these Parisian women: Céline, a magician, and Julie, a librarian, meet, move in together, and frolic around the city and fool men. But then suddenly, their story is interrupted, depositing them into a possibly haunted mansion located at 7 bis, rue du Nadir-aux-Pommes, to which the two inexplicably keep returning. Here, cinematic hallucinations unfold, and afterward they are spit out from the house with bloody handprints on their bodies and a drug-like candy in their mouths, their memories foggy, left to piece together the happenings inside. In Proustian fashion, they ingest more of the candy to go deeper, not just into the mysterious house but into the corners of their shared dreams and memories. The closer Céline and Julie become, the more they “go boating” down their stream of collective consciousness. (The French title, Céline et Julie vont en bateau, is a pun; the phrase can also mean getting caught up in a story.) We also immediately get caught up in the women’s relationship.

A genre-bending masterpiece of female friendship and surrealism, Céline and Julie Go Boating is arguably the most famous work from Rivette who, like his French New Wave contemporaries Jean-Luc Godard and François Truffaut, began his career as a critic for the famed film journal Cahiers du Cinéma. His writing was celebrated for its boldness, and he famously disagreed with the auteur theory—the idea of a single author of a film—and preferred the collaborative efforts of a cast and crew, the method he employed when making Céline and Julie. Rivette, more than most, also had a penchant for reverie and robust running times (his 1971 film, Out 1, is 13 hours long and something of a cinephile rite of passage). His motto was that “a film must be, if not an ordeal, at least an experience.” Though Céline and Julie is often labeled his most accessible film, it was, until now, physically hard to obtain. A new addition to the Criterion Collection, which comes in a long-awaited digital restoration, marks the film’s first DVD or Blu-ray offering in the United States; its run on the Criterion Channel last year was its streaming debut.

This recent release is exciting in its revelation of how much the film warrants repeated viewings. It is a head-scratching Russian doll of a story that is ultimately an ode to movie-watching and moviemaking itself. The two women become audience members of their own mental film—witnessing what unfolds within the walls of the mansion—except that they’re also its stars, improvising and scripting the story as it progresses. It’s like one of those Choose Your Own Adventure books, with the viewer more than inhabiting the minds of Céline and Julie: One begins to feel like them—just as curious, shocked, and bored—in the process, making it just as participatory as it is supernatural. Wrapped up in all this magic is a telepathic sense of female friendship and the way the gaze upon them requires an innate understanding of such a bond.

Using these characters as surrogates, we can teleport to the film within the film, which maintains its facade of superficiality with audience applause, forgotten lines, and curtain calls, as if it’s a stage play. Inside the house, we meet a whole new set of players—Camille, Sophie, Olivier, and a young girl named Madlyn—embroiled in a murderous melodrama based on Henry James’s novel The Other House, in which a web of romances leads to the fatal neglect of a child. French cinema staples Bulle Ogier, Marie-France Pisier, and Barbet Schroeder make appearances here as two sisters and a widower, the latter the mutual object of the sisters’ affection. Sequences are repeated throughout the film, and when it’s evident they’ve become a drag, Julie, as if she’s reading your mind, says, “It’s always the same thing. I’m bored.” Then she falls asleep. Her fourth-wall-breaking comment injects a newfound vigor into the film’s rhythm, and the show goes on. It’s pure movie magic.

The film begins with the sort of chase scene rarely seen in French New Wave movies—not the skirt-chasing of insecure men in countless titles, Éric Rohmer’s infidelity-stalking, or the dangerous pursuits of Godard’s noirs. In this comedy-melodrama-fantasy-mystery-adventure, Rivette opens on Julie, who looks up from a giant book on magic she’s reading and notices Céline fluttering through the park, dropping her personal belongings in the process. Julie then desperately pursues Céline, following her up and down several flights of stairs, past a supermarket, and through a crowded street. It is Alice chasing the White Rabbit (Lewis Carroll’s Alice’s Adventures in Wonderland is, unsurprisingly, referenced a couple of times in the film), but the wonder is of a different kind: a swapping—or blending—of personas. The critic Miriam Bale coined this genre a “persona swap” film, a female-buddy-action archetype that operates with a nonrealist tone. She describes Céline and Julie, a key text in this genre, as a “freewheeling frolic” that becomes “a valid alternative world.” The creation of the characters’ interchangeability gives them freedom of authorship in whichever world they inhabit.

Céline and Julie is also an early and seminal entry of the female friendship genre, exploring how close-knit women amalgamate into each other. Celine and Julie are supposedly strangers but immediately fall into each other’s grooves during a friendly cat-and-mouse game and become roommates, transporting us to a delightful story where they read each other’s minds and giggle at inside jokes. Rivette uses the film’s three and a half hours not to establish their getting-to-know-you stages in the traditional sense but to dive into their shared hallucinations, relying on the real-life friendship between the leading actresses to capture their rhythm. This is where their bond becomes not only unbreakable but also otherworldly. Sometimes, having a female best friend feels just like that.

What’s so interesting about Rivette is that he was known as the “occult thinker” among his colleagues—he’s a master of the spellbinding and surreal—but he has also been a staunch realist. In a piece for the Rohmer-founded magazine La Gazette du Cinéma, he wrote, “We have to go back to a cinema of simple writing. To put on film the manifestations, the way of life and being, the behavior of the cosmos; to film in the cold, documentary way, where the camera is reduced to a role of the witness, of an eye.” The statement is not as contradictory as it may seem. Céline and Julie may indulge in phantasmagoria, but it is equally a documentary about Berto and Labourier—and Rivette. It was fellow New Wave director Godard who had famously said that “every film is a documentary of its actors,” and Céline and Julie Go Boating is a documentary of a Parisian summer filled with free-form filmmaking and fun. In an essay Berto wrote upon the film’s original release (included in the Criterion booklet), she said the shoot was “play at playing.” She continued, “The spirit was that of a kindergarten putting on its year-end show for the grown-ups!” she continues. “We didn’t have a message. We wanted to create a performance film, a magical film.”

Berto and Labourier were not just friends in real life but lived together during the filming. When people cohabitate, it’s only natural that they start to adopt each other’s mannerisms and language, perhaps even begin to resemble each other. If you’re lucky, you may even become telepathic. This is the very dynamic that is immediately felt between Rivette’s free-spirited heroines, and Rivette used the authenticity of their friendship as the crux of their collaborative efforts. So synergetic was the filmmaking process that the “scénario” credits are given to “Berto / Labourier / Ogier / Pisier / Rivette.” A little serendipity was required, too: Rivette, bouncing back from a failed project, wanted to make something quick, fun, and easy. He tapped Berto and suggested she ask Labourier to join. What resulted is a blueprint for later masterpieces like David Lynch’s Mulholland Drive and Susan Seidelman’s Desperately Seeking Susan, both mysteries about women who fall down each other’s rabbit holes.

Céline and Julie is ultimately concerned with female pleasure. It is a pioneer in the cinematic expression of women who throw knowing glances at each other. It doesn’t matter who understands Céline and Julie so long as they understand each other. They thwart the attention of the men they encounter—both romantic and professional—in favor of each other’s company, and this makes them beholden to no one but themselves. By the end, the film itself becomes a mirror. We end where we started: the park, the crossing of paths, the chase. Except, this time Céline and Julie have switched roles: The former chases the latter. If their dynamic seems familiar from the first scene, watching them do this dance again after more than three hours of psychedelic adventures, it’s even clearer that Céline and Julie are two peas in a pod—or whatever the boating equivalent of that is.