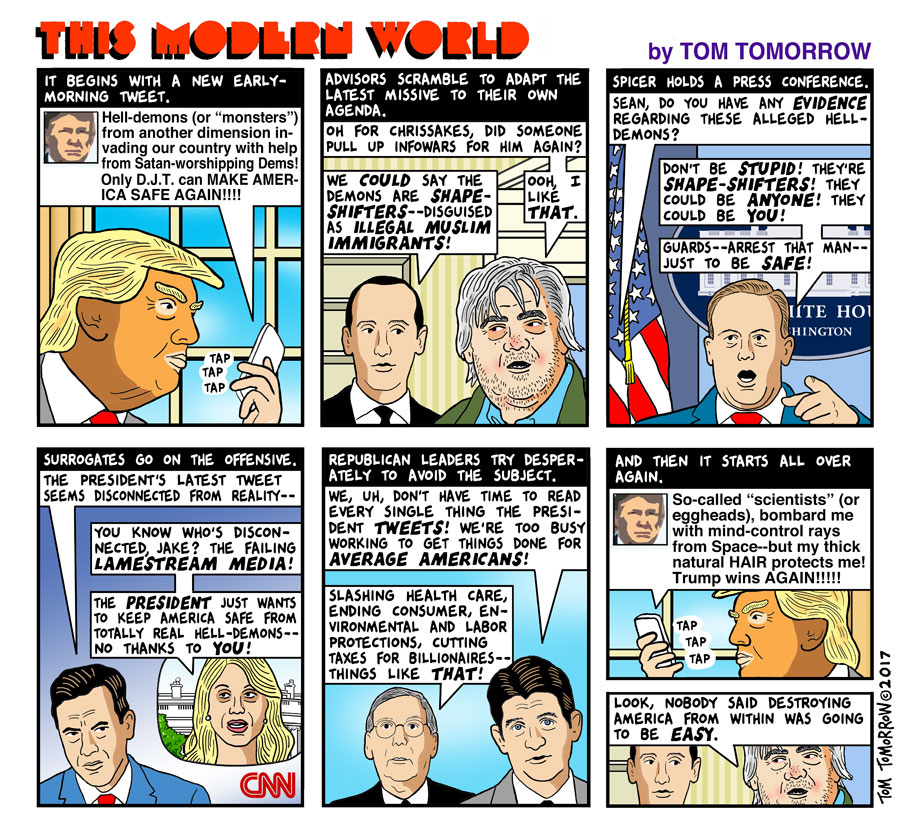 Dan Perkins was born in Wichita, Kan., in 1961, back in the days when the future still existed. The Kennedy presidency and the New Frontier gave birth to the last plausible and widely shared utopian moment, one that outlived John Kennedy’s own assassination by a few years but ultimately withered in the face of increasing pessimism. It was the Apollo epoch, the time of the space race, of American engineering and technocratic mastery, of scientists in crew cuts who promised health and happiness via gizmos and pills, of slick and streamlined advertising and pulp art merging with high culture in the works of Roy Lichtenstein and Andy Warhol, and of science fiction dreams entering the public imagination via Star Trek. In that giddy moment, even so misanthropic an artist as Stanley Kubrick could dream, as he did in 2001: A Space Odyssey (1968), of humanity making an alien-assisted evolutionary leap into the stars.1

But the shiny, gleaming utopia promised by that moment never arrived. Instead, dystopian anxieties came to the fore: the environmental nightmares that became mainstream in the 1970s, the dreary corporate-controlled future envisioned by cyberpunk in the 1980s, the increasingly frightening futures predicted by climate scientists and cli-fi writers trying to imagine how humanity will wrestle with a warming planet.2 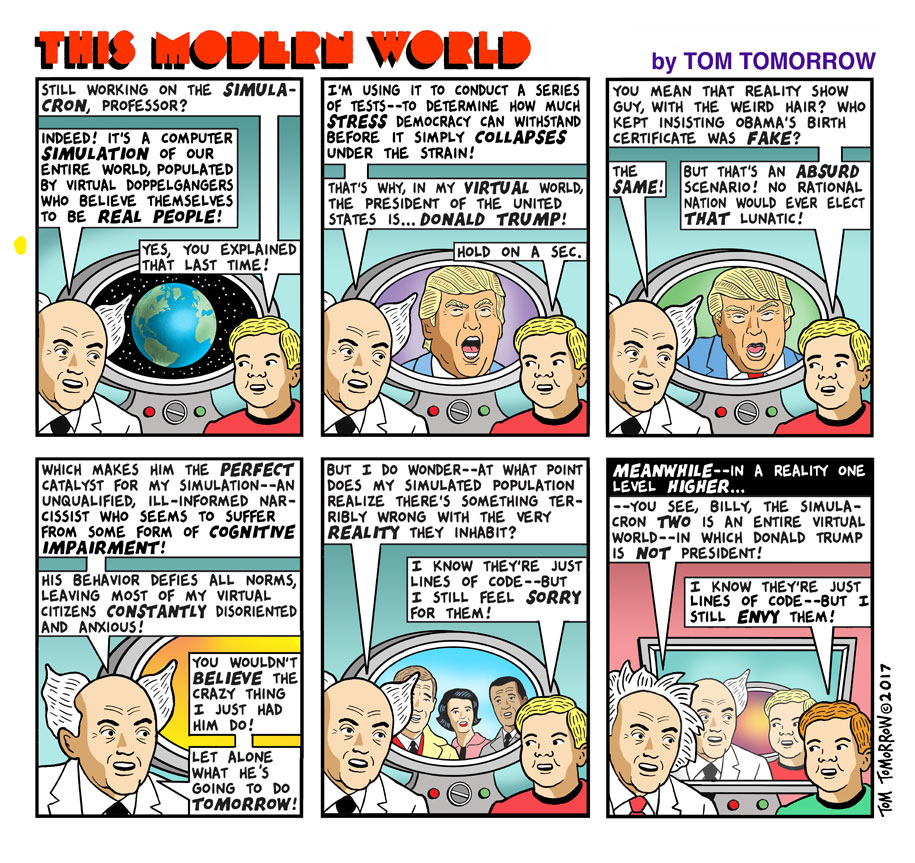 Like most good artists, Perkins, who cartoons under the pen name Tom Tomorrow, has never completely let go of his childhood and continues to be nurtured by the wellspring of creativity that comes with our first awareness of the world. He’s never lost a taste for the iconography of Cold War science fiction: bug-eyed aliens who fly around in UFOs that resemble kitchenware, wild-haired mad scientists, metallic robots, and city-crushing monsters. It’s hardly an accident that Perkins has a full-arm tattoo of the poster for Forbidden Planet, the much-loved 1956 science fiction reworking of The Tempest that featured Robby the Robot.3

Although the political cartoons he’s been doing weekly for three decades are topical, they also contain in their iconography a hidden argument that goes beyond partisan politics: Repeatedly his cartoons have used the images of a promised future that never arrived to accentuate the failures of the disappointing present.4

The seeds of Perkins’s signature style emerged when he was an art student in the 1980s and became interested in collage. In his use of advertising clip art in comics, he was flipping around the legacy of Lichtenstein and Warhol: Whereas they had brought commercial art into the museum, Perkins brought the clinical and stylized distillation of Pop Art into political comics.5

His earliest work appeared in Processed World, a San Francisco anarchist magazine that catered to disgruntled office workers. Because the magazine offered advice on workplace sabotage, many of the contributors of Processed World decided it was the better part of safety to use a pseudonym. This was when Perkins became Tom Tomorrow. But he’s stuck with the pen name because it suits the way his work mocks the fabricated media landscape.6

His earliest focus was on consumer society, but he zeroed in on politics during the first Gulf War. It was an easy shift, because politics and advertising were becoming increasingly intertwined, with the new media landscape of cable news blurring the line between entertainment and propaganda. The glossy too-perfect-to-be-real frozen faces of Perkins cartoons were indistinguishable from the denizens of CNN (and later Fox News and MSNBC).7

Reading Perkins’s latest collection, Life in the Stupidverse, a gathering of his cartoons from 2017 to 2020, I was struck by how he seems to be using science fiction imagery more than ever, finding it particularly useful as a way of keeping pace with the strangeness of the Trump era.8

“Satire in the age of Trump is exhausting,” he writes in the introduction. “Under previous presidents, there were interesting things to say. There was an important niche to be filled critiquing a popular president like Obama. It felt like it mattered to stand up against the wave of jingoism and war fervor in the aftermath of 9/11. Now the challenge is to avoid stating the obvious, over and over again.”9

Perkins succeeds in finding fresh ways to make his point by using science fiction conceits as a way of highlighting the strangeness of Trump’s character and behavior. The bad political commentary of the Trump era, of which there was an endless supply, worked like an anesthetic to numb us to Trump’s weirdness, talking about him as if he were within the range of a normal politician who can pivot to reasonable policies. Perkins to his credit never forgot how unsettling it was that this malevolent buffoon held the most powerful post in the world.10 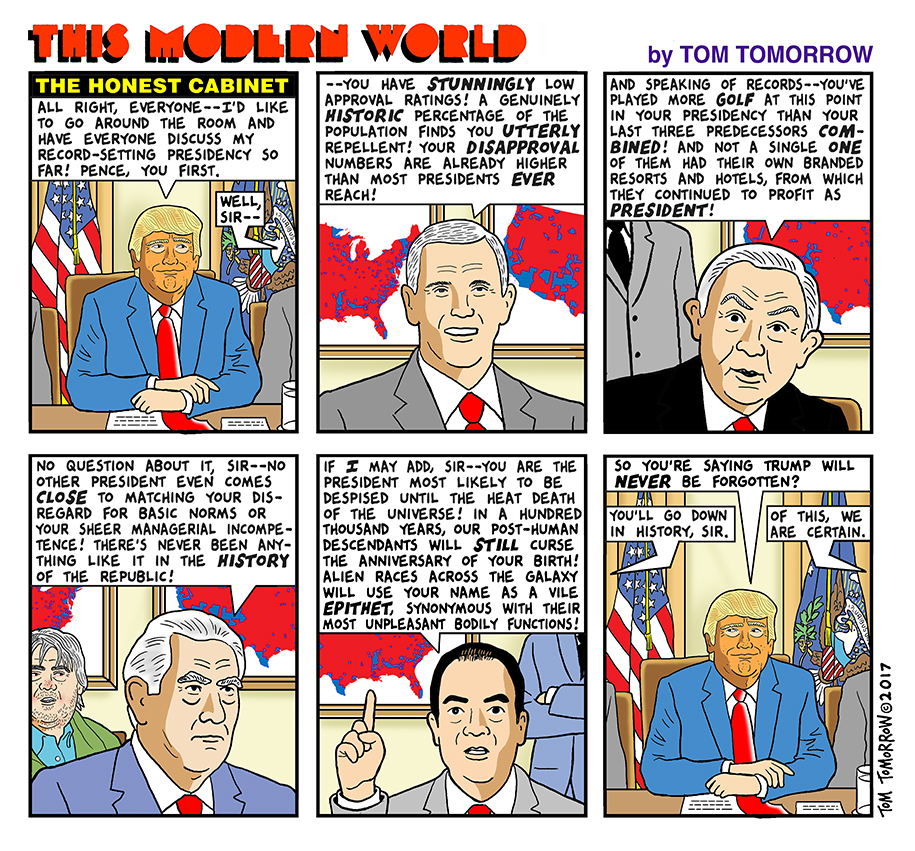 Banal political commentary works diligently to paper over oddness, while Perkins’s satire has been energized by a desire to make the strangeness of reality visible. One 2017 strip imagines Trump tweeting out “Hell-demons (or ‘monsters’) from another dimension invading our country with help from Satan-worshiping Dems!” Then Trump’s minions (including the decrepit and raggedy Steve Bannon and the chillingly vacant Stephen Miller) work to translate Trump’s ravings into something plausible. This strip was done well before QAnon started, yet it eerily predicted the way that unhinged conspiracy theory would circulate. Nor is the real QAnon fantasy very far removed from the ravings that Perkins imagined Trump tweeting.11

There’s a further reason Perkins’s turn toward science fiction is apt. As science fiction writer Kim Stanley Robinson has noted, “The world has become a science fiction novel, everything’s changing so quickly. Science fiction turns out to be the realism of our time.” A reality-show star who rises to the presidency thanks to his ability to bully on Twitter is something that a Philip K. Dick or a J.G. Ballard might have imagined in the 1970s. Now it’s part of history. The Covid pandemic has turned us all into characters in an apocalyptic novel.12 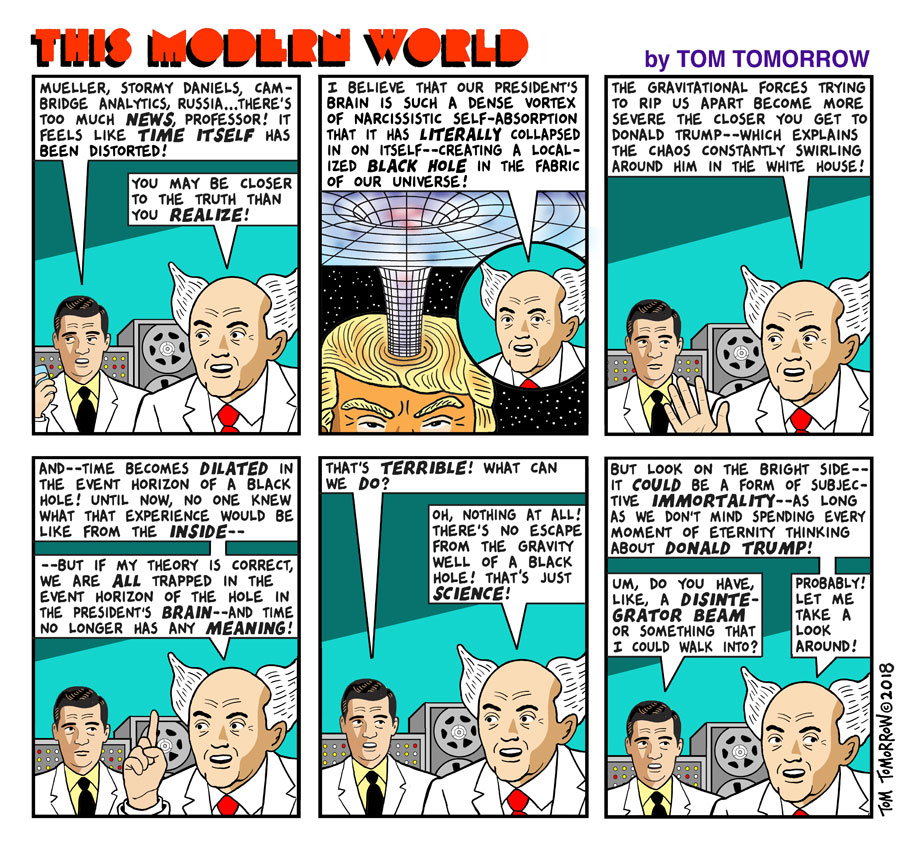 I first saw Perkins’s work in the early 1990s, when it was a breath of fresh air because left voices were so rare. He became a mainstay in many progressive publications and alternative weekly newspapers. He was the bridge between the earlier radicalism of Jules Feiffer, a pioneer in using alternative newspapers, and the latter flourishing of alternative art in graphic novels and on the Internet. Leftists of Perkins’s cohort, those who came into adulthood in the bleak 1980s and ’90s, tend to be a hardy lot. Perkins has struggled with many setbacks in recent years, including the dwindling of the alternative weekly newspaper as a market for cartoonists. Yet his work remains as tough, as unflinching, and as necessary as ever. Life in the Stupidverse is a vivid reminder of why he matters.13