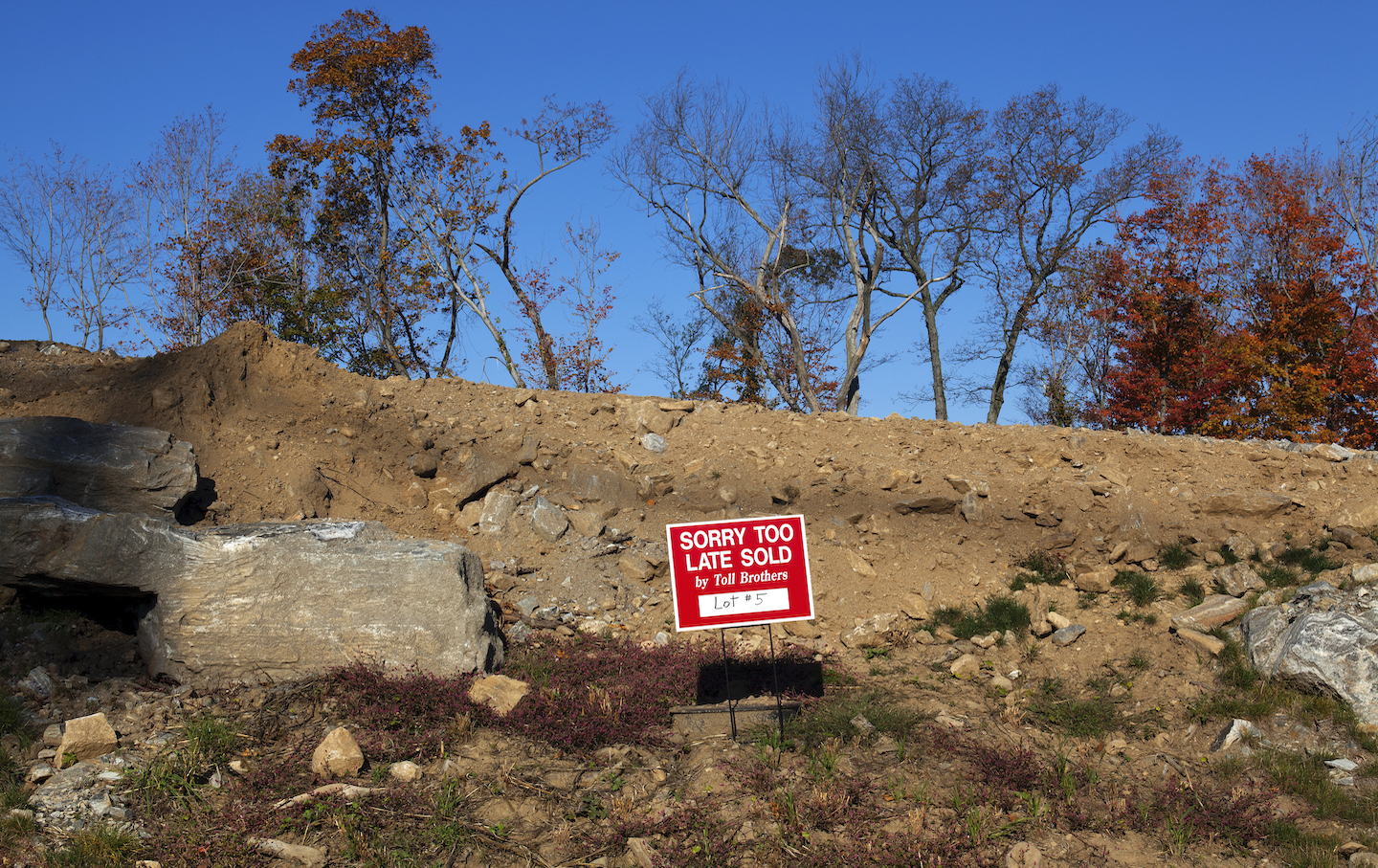 A sign on an empty lot shows that the property is already sold and a new home is going to be built on this lot in a housing development in Westchester County, N.Y. (Photo by Andrew Holbrooke / Corbis via Getty Images)

Brave New Home begins with an anecdote that leads to the book’s central question. Its author, Diana Lind, recounts how after she gave birth to her first son, her life no longer revolved around social events, trips, work, and other outside-the-home activities. She was instead forced to become a homebody. Spending all this time at home, she started noticing all the ways her housing situation in Philadelphia didn’t match her needs. Specifically, she was alone with her husband, without much support in the form of relatives or friends nearby. She felt isolated at a time when she needed to feel the exact opposite. The options available to her to break this isolation were all things she’d have to purchase, like Mommy-and-me classes and meals in family-friendly restaurants. She bemoaned this situation and longed for a different arrangement, one in which friends and family were closer, in the sort of setup that used to be much more common in the United States.

Nowadays, it seems almost everyone experiences some version of this. We live in housing that doesn’t suit us properly—too expensive, too small, too far from family and friends, too subject to the whims of landlords. The list goes on. Hence the book’s central question: How can we fix pervasively unfair housing?

This is a vexing problem, and Brave New Home begins its search for the answer with a history of single-family housing in the United States, tracing how popular ways of living changed through time—boarding houses falling out of fashion, the rise of the single-family home, the flight from cities to suburbia, particularly by affluent white people. Lind makes an effort to name the historical and economic conditions that led to these evolutions and even admits early on that the “home has never been truly free of market demands.” Still, she often depicts individuals, as consumers of housing, along with their corresponding buying power, as the most powerful agents in shaping what housing looks like in the United States.

What Brave New Home does in terms of elucidating possibilities for alternative modes of housing or even thinking about housing is often energizing. It is hard to struggle against our present when we cannot imagine the future, and Brave New Home certainly expands our horizons for how we could live.

Some of these alternatives are framed by exciting questions. What if we could more easily live across generations, so grandparents could support working parents in raising children? Or in Lind’s words, “What if health and wellness drove value in the housing industry rather than prestige and privacy? What if the American dream for housing wasn’t just a yearning for the financial boon that homeownership provides, but also for a home that was a source of mental and physical health?”

Some of the alternatives, though, are grim. A chapter dedicated to co-living spaces doubles as an exposé of the ways many people are forced to arrange their entire lives around work, in such a way that they are forced to simulate a community by paying a company to arrange their lives—everything from cleaning to socializing—for them. Tiny homes, another phenomenon Lind analyzes, seem to be an adaptation to unacceptable conditions: jobs that take people from place to place, never allowing them to put down roots, or that pay too little to afford a traditional home or apartment.

If we are to change housing in the United States, we have to contend with the real estate industry’s outsize power in shaping the options available in the housing market, as well as public housing policy. We also have to contend with decades upon decades of racist housing policies that have kept cities segregated. And we have to battle the effects that those policies have on people’s lived material realities. Many of the housing choices we make are not driven by preference. They are forced on us by options that exist because big developers have contorted housing policy to the benefit of their profits. Our choices are limited by the circumstances of our employment and larger income trends. And they are shaped, as Keeanga-Yamahtta Taylor lays out in her book Race for Profit, by practices meant to segregate and discriminate against Black working-class people in particular to keep real estate values up.

Brave New Home recognizes this tension but never quite meaningfully engages with it. Again and again, Lind gives the same weight to individual choice, tradition, cultural habits, and media influence as she does to market and economic forces. For example, her discussion of millennials’ low rates of homeownership leaves open the question of whether they don’t own houses because they choose not to, or because the lack of available well-paying, stable, full-time jobs, in combination with skyrocketing home prices, has forced them into renting.

Lind concludes that these two influences might not be mutually exclusive. Of course they aren’t, but that’s not the point. To change housing as we know it, finding a definitive the answer to that question will be crucial.

In their book In Defense of Housing, David Madden and Peter Marcuse put forward an answer to Lind’s central question. They argue that as long as the profit motive exists, we will never be able to make housing that works for the needs of most people and that policy shifts and zoning changes that leave untouched the status quo of housing as a commodity won’t solve the housing crisis. Instead, they put forward a radical alternative: that housing is a human right and that to be distributed fairly, it should be removed from the market entirely. Similarly, Neil Smith, in his book The New Urban Frontier, outlines the importance of capital investment in the shaping of cities, and while he concedes that consumers have a set of preferences, these are always necessarily conditioned by the landscape created by capital investment.

Brave New Home certainly belongs to this universe of books on housing, but its argument does not clarify whether Lind would agree or disagree with Madden, Marcuse, and Smith. The book’s unwillingness to stake a clear position on what shapes the housing landscape puts most of the alternatives it proposes on equal footing. The reality is that many of these alternatives would need to be championed by competing interests. Lind is well aware of this—“Differing motives will naturally create conflict, and investors are coming out on top more often than not”—but the book never addresses these implications: The interests of real estate investors and people in need of housing are diametrically opposed. To curb the power of investors, those with opposing interests would have to mount a full-blown offensive against them. Instead of this contestation for power, Brave New Home proposes that regulating real estate ventures and diversifying zoning to expand beyond single-family homes might create more housing options for Americans.

As the book approaches its conclusion, Lind describes the current paradigm of urban policy, in which cities and city planners attempt to incentivize developers to build more density and more affordable units through tweaks in tax policy and zoning changes. She recognizes that these tweaks are insufficient (“We need a suite of brave new ideas if we’re really going to address our current housing paradigm’s problems, not just make slight improvements to the status quo”) and even casts doubt on the notion that homeownership generates wealth for anyone (except for “an entrenched class of wealthy people”). But the fundamental assumption that profit-driven developers can provide enough housing for everyone remains unquestioned.

The fight for housing is not about type or about zoning or about density; it is about the right to live in a dignified way at all. In Chicago, where I live, that fight has taken the form of a campaign to lift Illinois’s statewide ban on rent control, which has been in place since 1997. Led by organizations like the Kenwood Oakland Community Organization, the Pilsen Alliance, and the Chicago Democratic Socialists of America, the campaign has its locus in a few rapidly changing neighborhoods of the city, where largely Black and Latinx families have lived for generations and are now finding themselves priced out of their homes. In Chicago, perhaps one of the last somewhat affordable big cities in the country, rent control is the most pressing housing fight, and it’s about pushing back against the people who see housing as merely a way to make a profit.

As Madden and Marcuse argue in In Defense of Housing, “There is a conflict between housing as lived, social space and housing as an instrument for profit-making—a conflict between housing as home and as real estate.” Lind seems to be aware of this conflict, but Brave New Home presupposes that the status quo is intractable and that the profit motive will always exist, so we might as well just find release valves that make our housing more bearable. The way to a world with fair housing isn’t going to be found in alternatives that don’t completely upend the balance of power between capitalists and the working class. Fair housing is possible only when we can guarantee it as shelter for the many, not profit for the few.