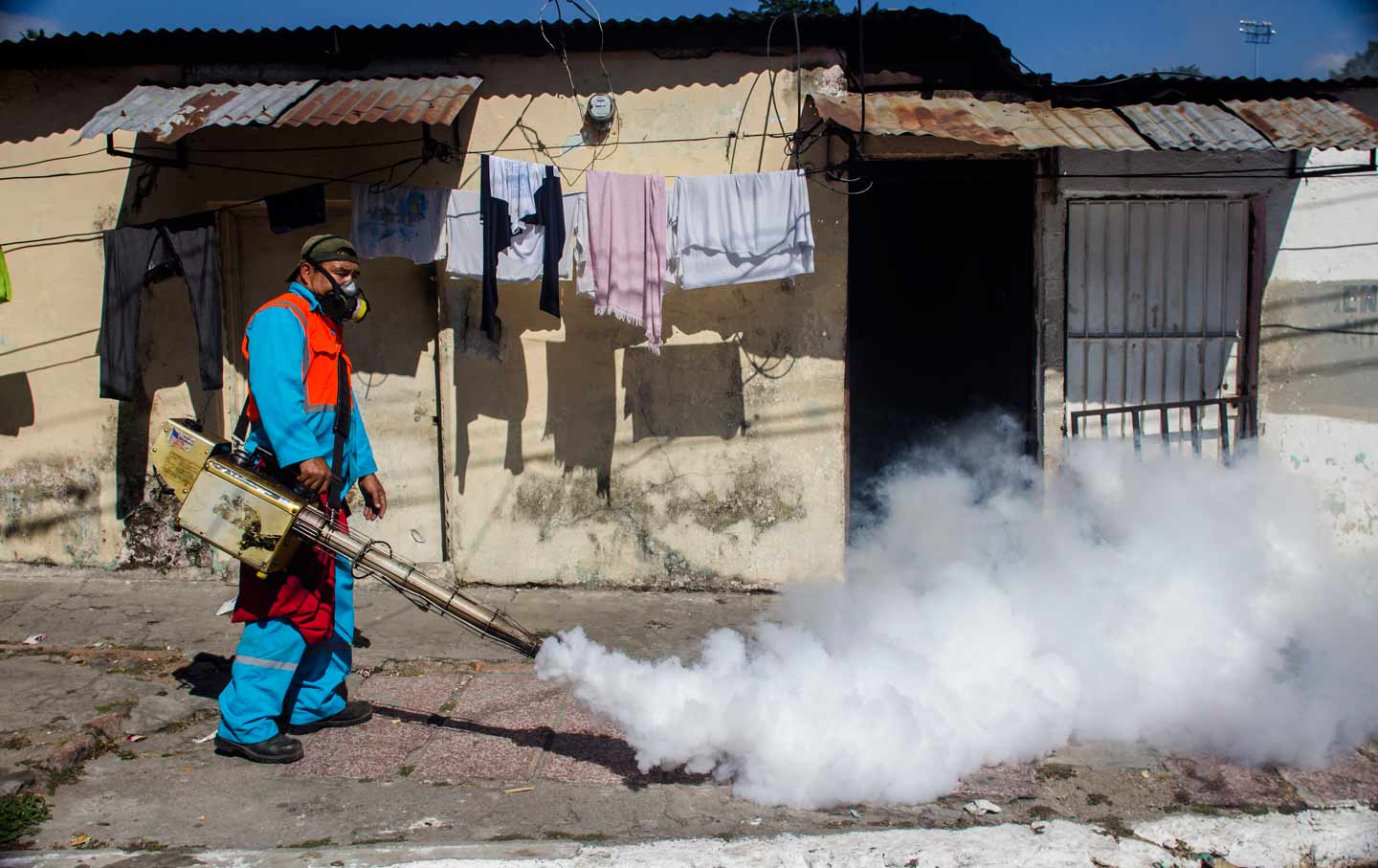 The spread of Zika warns of cataclysm to come. Rising temperatures have increased the range of the Aedes mosquito that carries the pathogen, initially concentrated in Brazil and now “spreading explosively” through the Americas. Zika leads to, among other things, severe birth defects; in Brazil, a “million people have been infected and nearly 4,000 children have been born with microcephaly, a rare condition in which babies have unusually small heads.”

In El Salvador, the Zika crisis has flummoxed the Catholic Church. The small, desperate country—water stressed, impoverished, terrorized by gangs, bullied by corporate capital, and harangued by the Obama administration—has advised that women hold off getting pregnant for two years, until 2018. The church’s stance on family planning is already immoral, backing Salvadoran laws that punitively criminalize abortion and imprison women for having miscarriages. Rather than confront the consequences of this medievalism, church leaders, in the face of Zika, have kept quiet. The New York Times writes that the church was “unprepared” to respond to the government’s call to not have babies. The archbishop was to say something last Sunday, but he fell sick and kept silent. An auxiliary bishop said there would be a meeting of church hierarchs “that might yield some answers. ‘Certainly this is a new theme, and it has to be looked at calmly,’ he said in an interview. ‘I think that the church is going to take this very seriously. I would just wait a little.’” Salvadorans are still waiting.

Over in Cuba, Zika has yet to make an appearance. It’s circling. There have been cases in Haiti, Puerto Rico, the Dominican Republic, Jamaica, and other Caribbean islands. But for the last few years, well before the current Zika outbreak, Cuba’s Ministry of Public Health has been carrying out an aggressive “lucha antivectorial” (anti-vector struggle) against the Aedes aegypti, with campaigns to fumigate and clean up the places where mosquitos breed and to monitor fevers. Cuba’s public-health campaigns are famous, and this one started specifically in response to an earlier regional outbreak of dengue and chikungunya.

A few days ago, in the wake of the fast spread of Zika, Michael Osterholm, a professor and director of the Center for Infectious Disease Research and Policy at the University of Minnesota, lamented in the Times that “when it comes to diseases, we have a very short attention span, and we tend to be reactive, rather than proactive. Instead of devoting ourselves to a comprehensive plan to combat microbial threats, we scramble to respond to the latest one in the headlines.”

Cuba, though, is famously proactive when it comes to fighting tropical diseases—acquiring experience that will be useful now that the whole world is turning into the tropics. Maintaining public health is part of Havana’s broader socialist ethos, but also essential for its critical tourist industry. When dengue and chikungunya began to spread, the government stepped up its efforts at vector control, committed to contain any outbreak that might scare visitors away.

Cuba finds itself trying to avoid the trap: Cuba needs tourists; tourists spread Zika; Zika scares away tourists. Another threat to Cuba’s public-health system is its increasing integration into the global political economy, which is accelerating due to improving relations with Washington. As Osterholm writes, the spread of Zika, and similar mosquito diseases, is made worse by “an explosion of plastic and rubber solid waste [that] now litters virtually all parts of the globe, particularly in the developing world. Non-biodegradable containers, used tires and discarded plastic bags and wrappers—whether in the backyard, a roadside ditch or an abandoned lot—make ideal habitats for these mosquitoes to lay their eggs. All they need is a little rainfall.”

Cuba has, until now, been an exception. As the rest of the world buried itself under a mountain of crap (I remember the plastic plague visited on Guatemala about 15 years ago, when Coca-Cola and other soda companies began to sell products in disposable bottles as opposed to glass), Cuba, by necessity, pioneered an impressive regime of recycling, as the anthropologist Sarah Hill writes in this great article, “The Never Ending Life of Cuban Things.” That might quickly change, as Cuba, too, gains access to plastic.

Here’s a firsthand account, in English, of how Cuba’s anti-Aedes campaign plays out on the ground. It has real limitations, as the account details, but so far, compared to surrounding countries, it has been relatively successful in containing dengue and chikungunya. In 2015, El Salvador suffered nearly 50,000 cases of dengue; Cuba had 1641 cases, no deaths, and one of the lowest incidence rates in the Americas. The Dominican Republic had nearly 17,000 dengue cases and 103 fatalities. Hopefully, Cuba’s success will continue with Zika.