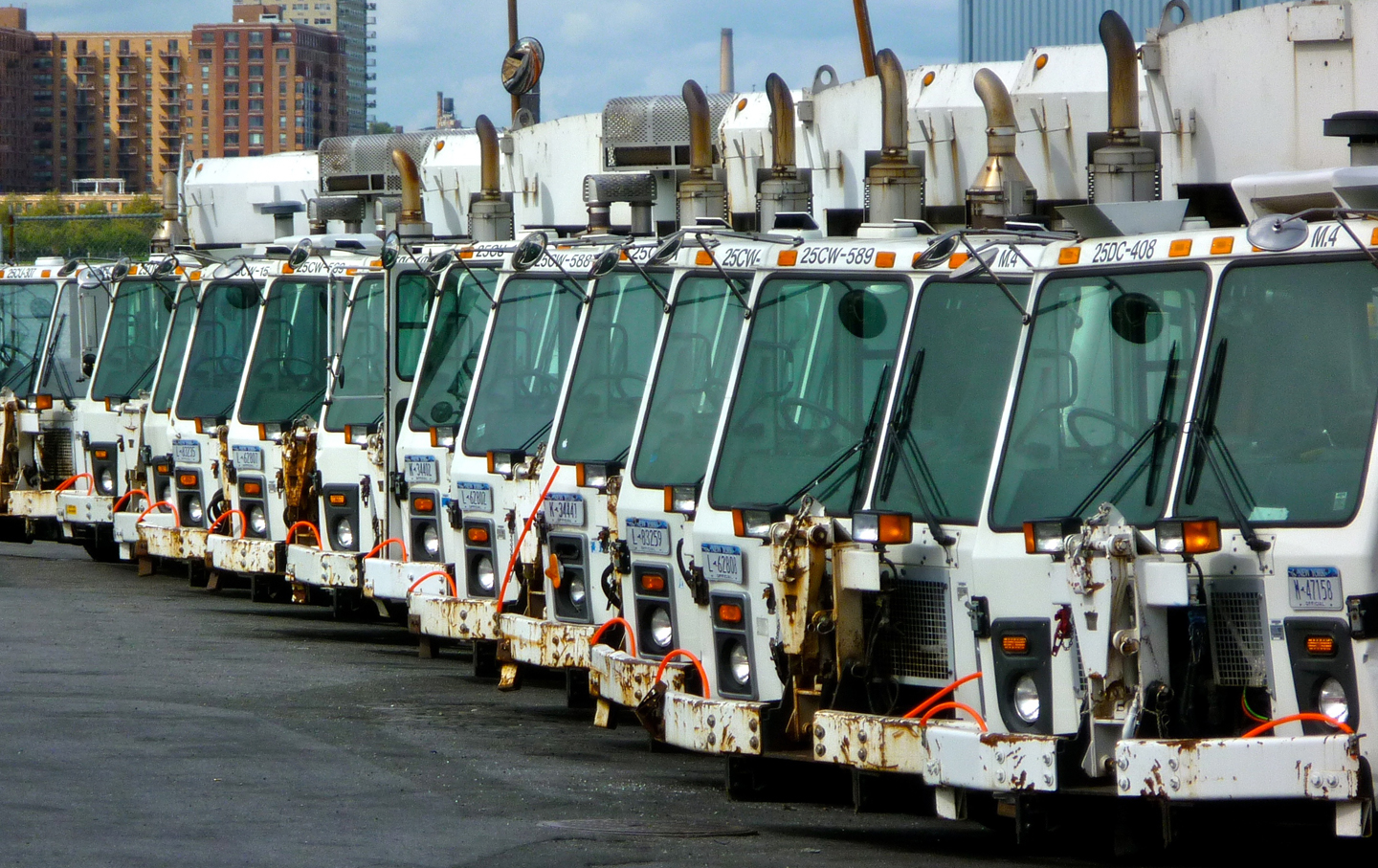 In an age of global warming, two global capitals, Los Angeles and New York, are going “zero waste.” Following a nationwide trend, the cities have launched new plans to aggressively reform their waste-management and recycling systems to nearly eliminate dumping in landfills.

While zero waste seems like a tall order for the two arguably trashiest places on earth, LA’s city government is currently rolling out a full-fledged Zero Waste plan that will “divert an estimated 90 percent of local waste from landfills by 2025,” including commercial and residential garbage. The system parallels a similar reform plan in New York City, as well as a national resolution on zero waste by a coalition of mayors.

A policy analysis by the advocacy group LAANE and its associated national coalition Partnership for Working Families, lays out a “blueprint” for zero waste in cities, which can save landfill space, cut pollution from collections and landfill facilities, mitigate public health impacts like lung disease and cancer, and cut carbon emissions, in turn making downwind urban neighborhoods healthier and cleaner for residents. The report emphasized that when these reforms are done right with public oversight, overhauling sanitation can save waste as well as lives, by establishing cleaner, safer, and fairer workplaces.

But according to LAANE, many municipal governments are modernizing their waste systems using regressive labor standards. “Eco-friendly” doesn’t necessarily mean safe workplaces: “waste and recycling collection has the fifth highest rate of fatality in the United States, with fatalities ten times more likely than average.”

In New York, where the De Blasio administration is moving toward zero landfill waste by 2030, commercial waste processing remains a dirty business. Allan Henry, a labor activist who started working waste trucks as a teen in 1985, has observed virtually no recycling of commercial waste by private collectors, other than cardboard—so even pre-sorted glass and cans from workplaces are dumped together indiscriminately. And employers not only flout recycling rules but basic labor protections.

Henry started out with a $16-an-hour union job, but he says some workers earn only about half that today, with little union support or safeguards. These “low-road” waste-service contractors subject workers to grueling conditions, like 16-hour shifts and no protection from harsh hot or cold weather. Companies typically “don’t even provide their workers with work gear.… most of the workers gotta buy their own gloves, their own boots, their own clothes, their own rain gear,” he adds, “and these are things that are supposed to be provided by the employer. But there’s no oversight in this industry.”

Now working as an organizer, the longtime Teamster says he’s met workers who complain of trucks with faulty brakes, but fear being “fired or disciplined”—for example, bosses may arbitrarily cut their hours—for refusing to work in unsafe conditions. The risks are especially deep in workplaces dominated by what Henry calls management-friendly unions: “They’re retaliated against. And what are they to do…because they already know ahead of time that the union is not going to do anything for them.”

And those trucks often shouldn’t even be on the road. The city, according to an analysis by the Partnership and local advocates, is strafed with redundant, convoluted pick-up routes; private contractors route Brooklyn trash past neighborhood facilities to the Bronx or New Jersey. This pattern “results in private garbage trucks driving thousands of excess miles every night to reach their designated transfer station to dump,” churning toxins and smog into neighborhoods along the way.

LAANE’s report compares different waste systems across LA County and found that better labor conditions and cleaner industrial methods are more common in municipally controlled waste-management systems, along with “high road” private-contractor systems, in which cities use exclusive contracting for streamlined services with well regulated companies. By contrast, so-called open-permit systems, which employ multiple haulers simultaneously, are rife with inefficient routes and poor labor conditions, because the jobs go to contractors that might just bid to do the job cheaply, not safely, at workers’ expense.

The research suggests these upper-tier service providers could provide models for transforming sanitation on the labor and environmental fronts. “It’s not only a difference in wages,” says LAANE Senior Research and Policy analyst Lauren Ahkiam, “but it’s also oftentimes a difference in the level of training, the level of protective equipment provided, the likelihood of having permanent or long-term employees versus temporary workers.”

Often, the workers who feel the brunt of the waste industry’s foul practices can drive a path to reform. According to the Partnership’s Waste and Recycling Campaign Director Hays Witt, the group’s collaboration with local labor advocates has shown

Many sanitation workers feel like they’ve got a big stake in making waste systems reach their full potential. Workers feeling empowered on the job means that we are able to hear directly from them the impact our policies have on job quality and maximizing diversion.

LAANE’s blueprint aims to encourage city policymakers to link social and environmental planning goals. “A landfill is just one guy taking a truck full of stuff to the landfill, dumping it and leaving,” Ahkiam says, while a recycling program can put a whole community to work, not only through career-track processing jobs, but also public environmental education initiatives and production of recycled glass, paper, and metal materials. “The more you recycle, the more jobs there are.”

So urban grit can be green: Cleaning up a city means turning a historically wasteful community, and its people, into a new kind of renewable resource.