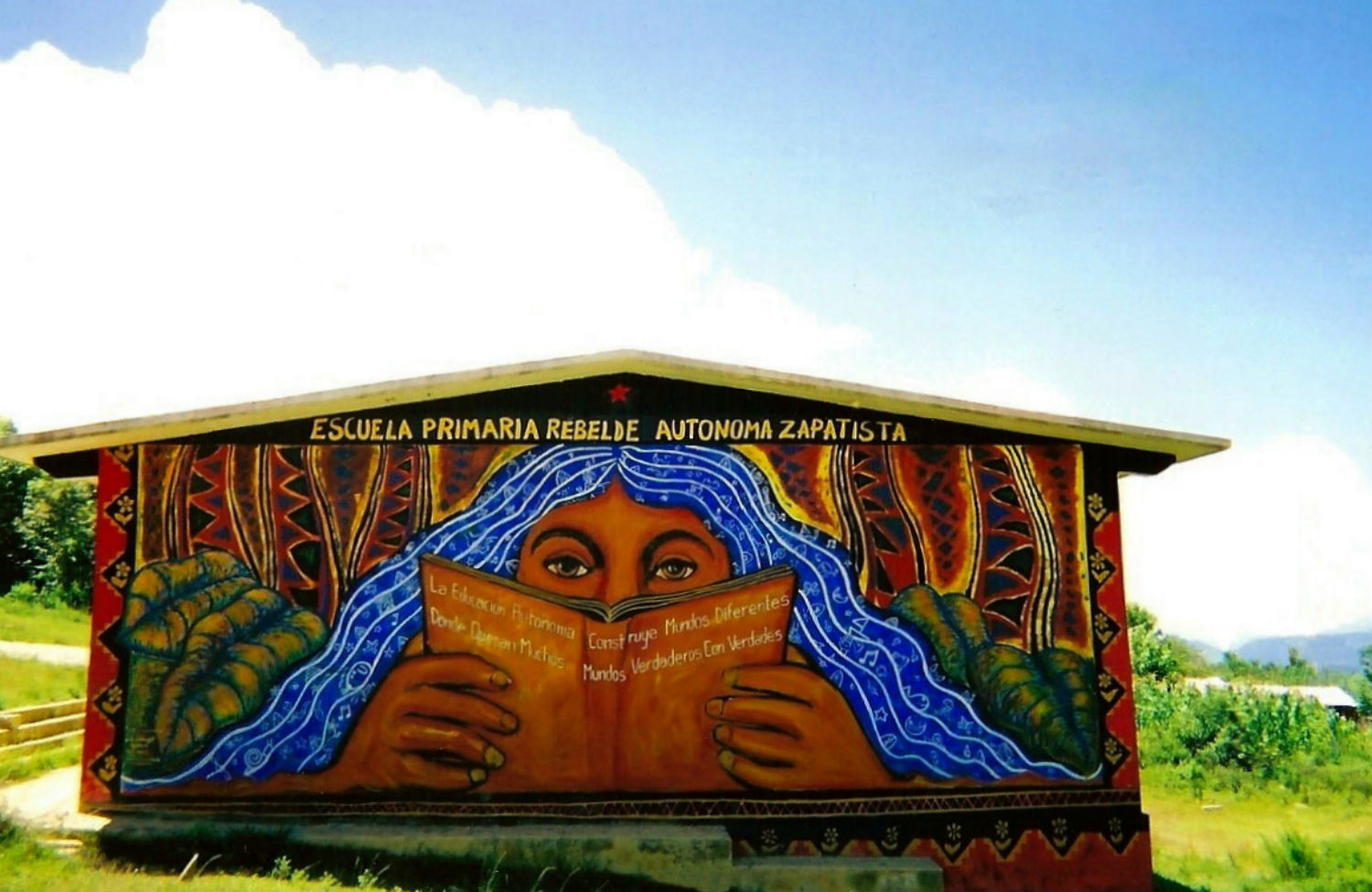 A primary school in the Zapatista village of Oventic, the southern state of Chiapas, Mexico, August 2004. (Bastian/Flickr)

Thousands of Zapatistas turned out this month to celebrate the twentieth anniversary of the 1994 uprising of the Zapatista Army of National Liberation (EZLN). At the New Year festivities in the five Caracoles, or regional centers of Zapatista autonomous government, veterans and adolescents not yet born at the time of the insurrection danced, flirted, shot off rockets and celebrated “autonomy”—the ideal of self-government that lies at the heart of the Zapatista experience.

The Zapatistas came out by the thousands for their anniversary parties, surprising some. Their death, it turns out, had been greatly exaggerated. Accustomed to the face of politics as a white man talking, the press and the political class began writing obituaries for the movement when Subcomandante Marcos retired from public view in 2006.

Although Zapatista communities have continued to emit a steady stream of communiqués denouncing military and political attacks, land grabs and the presence of paramilitary forces in Zapatista communities, the media has ignored them. It smugly predicted that the movement was moribund and would soon merit nothing more than a folkloric footnote in the history of the inexorable advance of global capitalism. The return of the Institutional Revolutionary Party (PRI) to power in 2012 seemed to reaffirm the idea that Mexico was “back to normal.”

When nearly 50,000 Zapatistas marched in silence on December 21, 2012, they challenged the official line that their movement had all but died. The EZLN communiqué was brief and to the point: “Did you hear that? It is the sound of your world crumbling. It is the sound of ours resurging.”

The twentieth anniversary and New Year celebrations this month marked a second moment in that resurgence. The festivities were a family affair. Press was banned, and although a series of articles by Subcomandante Marcos came out before the events, the organization put out no public documents on January 1, the day of the anniversary itself. It was a time for Zapatistas to pat themselves on the back, an internal affirmation more than a political statement.

It may have been “just family,” but the Zapatistas have a wide extended family. Thousands of supporters and students, mostly youth from Mexico and abroad attending La Escuelita (the Little School), fanned out to the Carcacoles to join in ceremonies and all-night dancing.

The Little School was launched in August to teach “freedom according to the Zapatistas.” Students paired up with tutors from among movement members and were placed in families throughout Zapatista territory. Classes consist mostly of accompanying Zapatista families during their daily chores and long talks over beans and tortillas.

The experience opened up the Zapatista experience to outsiders, who were encouraged to ask questions of their host families. It also enabled the organization to hold up a mirror to itself—to see itself through the eyes of the students, reflect on the ground covered and get to know other communities.

On New Year’s Eve, many of the 4,000 students attending the school’s winter sessions went out to Oventic, a foggy village in the highlands close to the city of San Cristóbal de las Casas, or remained in more remote communities with their host families to join in the sports competitions, music, speeches and dancing.

Living Off the Power Grid

The anniversary sparked a debate on the movement, two decades after thousands of masked Mayans came out of the jungles and mountains in military formation to take over municipal seats in the southeastern state of Chiapas.

Subcomandante Marcos published a series of his characteristic communiqués, weaving meditations on death (“it’s not death that worries us and keeps us occupied, but life”) and biography (“historiography feeds on individualities; history learns from peoples“) with reflections on the organization and a story about a beetle named Durito.

Critics rushed to point out that poverty still exists in Zapatista communities—a fact not denied by the organization and obvious to the many visitors. Journalists and pundits invented and then passed around statistics on the number of Zapatista adherents, or lack thereof, as well as on the extension of Zapatista territory and on living conditions in autonomous regions. Many pronounced the world-famous uprising dead or dying for failing to resolve problems or maintain its high profile.

What reporters missed as they snuck into celebrations closed to the press is the significance of “autonomy.”

Zapatistas say the word with pride, much as you’d talk about your children or grandchildren. These communities have moved steadily off the traditional power grid. Disappointment with the Mexican government’s betrayal in rejecting its own signature on the San Andres Accords of 1996 led to a decision to de-prioritize pressuring institutions and instead build from below.

Imagine communities where local officials rotate to avoid accumulating power, political parties have no role or presence and state and government programs—long used to buy off advocates for a more equal society—are banned. Much of the food is produced by the community, cooperatives do buying and marketing and decisions are made collectively rather than being imposed by a state. The Zapatistas have attempted to resurrect this model, practiced for centuries in indigenous Mexico prior to the Spanish conquest.

Comandante Hortensia addressed the crowd in Oventic. “We’re learning to govern ourselves according to our own ways of thinking and living,” she said. “We’re trying to move forward, to improve and strengthen ourselves—men, women, youth, children and old people.”

She added that 20 years ago, when the Zapatistas first said ¡Ya basta! (“Enough!”), “there wasn’t a single authority that was of the people. Now we have our own autonomous governments. It may have be good or bad, but it’s the will of the people.”

The Zapatistas acknowledge that progress in improving material conditions has been slow and hampered by obstacles and errors. But they express deep pride in what has been built, in “their” organization. Local health clinics—often poorly stocked and precariously staffed—use natural medicines made by community cooperatives and have special areas where trained midwives attend childbirth. Schools with rudimentary equipment teach in the indigenous languages of the communities, focusing on understanding the world the children live in and basic concepts of freedom, equality and cooperation. The organization of defense and production in the communities shows discipline and commitment.

The anniversary revealed that at 20 years old, this military-political organization that defies easy categorization is what a democracy should be: an ongoing effort at building a better life collectively. When Zapatistas came together from communities throughout their lands to celebrate, the main achievement they marked was the survival of the organization itself—after 20 years of attacks, they’re still there, running their own communities, raising new generations of Zapatistas and carrying on the dialogue with the outside world that has enriched both sides.

Communities have survived the moment in a long distance race when the runners pass the baton. Youths make up a large part of the Zapatistas’ base, representation and, more and more, leadership. Educated in the Zapatista school system and raised in Zapatista communities, a new generation is beginning to take on positions of authority. Their eagerness to assume the collective identity of their organization is another mark of the staying power of the autonomy experiment.

The role of women has also transformed visibly—not just in the number of women in leadership positions, but also in aspects of daily life, such as increased male participation in housework and childcare, and sanctions against violence towards women. The shift from downtrodden alienation to indigenous self-government makes a huge difference in their lives, even as poverty remains.

In evaluating the two-decade experience, most criteria ignore these subjective factors. By opening up the communities to participants in La Escuelita, the Zapatistas did something governments almost never do: let the people publicly evaluate the experience themselves. Returning students recounted the experience enthusiastically, describing how their hosts revealed a world that wasn’t perfect by a long shot, but where each person mattered and each effort, each achievement and each mistake was their own.

As the Zapatistas celebrated their accomplishments, vowed to correct their mistakes and honored their dead, they also enjoyed more traditional New Year’s activities like setting off bottle rockets and dressing up in their finest. The solid continuity of Zapatismo was joined by a portent of change, the sense that yet another phase of one of history’s most unclassifiable revolutionary movements had begun.

As visiting students from all over the world joined together with veterans of the movement and younger members of the community, new possibilities shimmered under the moon of a new year. Contact with a new generation of supporters proved that the indigenous autonomy movement continues to attract people from all over. For now, the schools will continue. The Zapatistas have also jump-started the dormant National Indigenous Congress, holding an event in August where hundreds of indigenous representatives described the situation in their lands.

Amid mud, guitars, vivas, fireworks and embraces, thousands of Zapatistas welcomed 2014. The debate on whether the movement is dead or alive, victorious or defeated, was left behind along with 2013. It wasn’t just the alcohol-free festivities that made people optimistic; it was a feeling of collective accomplishment, under tough conditions. A feeling of finally having a future.

“I know you don’t care,” Subcomandante Marcos noted in a missive to his critics, “but for the masked men and women from around here, the battle that matters isn’t the one that’s been won or lost. It’s the next one, and for that one, new calendars and grounds are being prepared.”