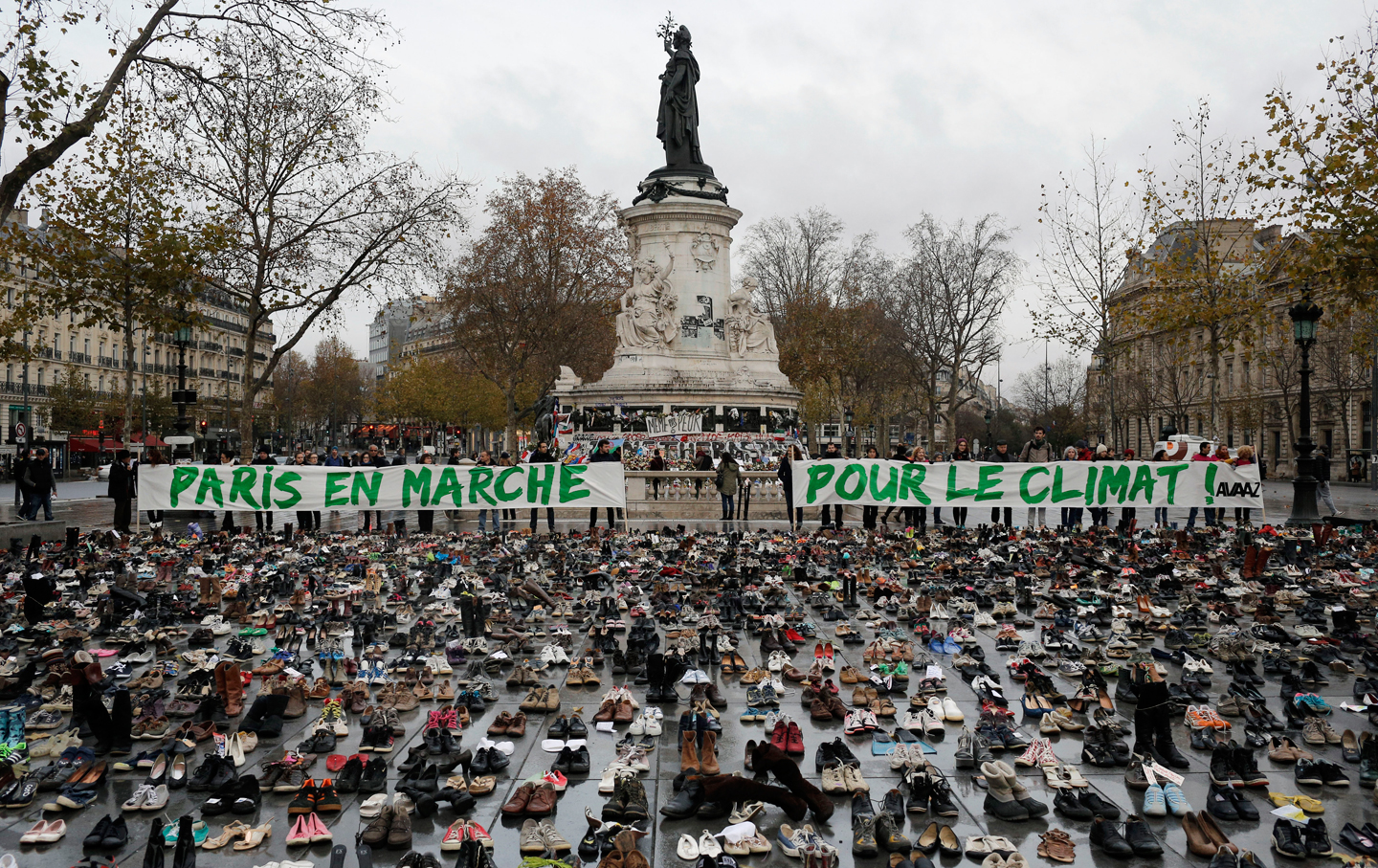 If you see me in Paris, you’ll notice my black eye. One early morning, I raced to the métro near our delegation’s hostel in a state of dizzy stress, a too-heavy bag slung across my chest and bleary with fatigue from long days at COP21, the UN climate conference in Paris. I bought a ticket, rushed through the swinging door, but before I knew what happened, the door swung back hard and hit me in the face. I staggered onto the train and slumped into a seat. The side of my face throbbed, and I could feel the bruise blooming around my eye.

I’ve had a few days to contemplate my black eye, and I’ve come to see it as a metaphor for the deeply contradictory predicament of youth at this most significant of world negotiations on averting climate catastrophe. When it comes to climate politics, we find ourselves having all the power and no power at all.

The thousands of young people here are universally earnest, eager, informed, determined, compassionate, committed, and focused—willing to sacrifice time and energy to the urgency of the climate crisis. We’ve come of age with the knowledge that our futures are insecure in the face of extreme climate disorientation. We are the only global generation in the history of humanity that knows it is impossible to count on the future being anything like the past—that our homes and all that we love will be transformed or destroyed. Traditional institutions have failed our generation in the face of the climate threat, so we have learned from a young age to stand up for what we love. We plan actions and craft messaging to assert that power is in the hands of the people. We don’t “wait on change.” We organize our communities, lobby to divest, and shut down fossil fuel infrastructure. Our narrative asserts our ability to create change in the face of crisis.

But here at COP21, we constantly strategize over how to impact the negotiations, how to have our voices heard, and how to influence politics and policies. There is a deep sense of frustration that often shades into despair. Despite immense tidal waves of energy and dedication, our voices are excluded. We knock on doors, but most of those doors are slammed in our face. We call for rich nations to provide financial support for vulnerable poor countries that face the first and worst climate impacts. John Kerry announced on Wednesday that the United States pledges $800 million in climate finance. Meanwhile, the US spends $37.5 billion annually on fossil fuel subsidies. One of the core youth demands at COP21 is financial support for countries that are already experiencing (and will soon experience) severe climate impacts. We regard this as a necessary act of justice. Yet the United States has avoided the idea of reparations, reportedly demanding that vulnerable nations never seek compensation from rich nations. The quality of action that we seek remains elusive.

The youth narrative of hope and change clashes with the realpolitik of COP21 and climate politics. There is a howling disconnect between what we know society needs to address and the solutions that are proposed in negotiating rooms. Youth spend their days running on the renewable energy of love as they try to figure out how to influence political actors. But so far we have not translated the enormity of our generation’s historically unique experience of risk and insecurity into the kind of effective political clout that would push forth a strong ambitious agreement.

This paradox is an illustration of “the mobilization gap.” I discovered this phenomenon as I wrote my Senior Thesis at Harvard College. Those in the climate movement see our goals as political but don’t believe that we have the clout to achieve these political goals. At COP21, I see youth working towards goals and solutions that cannot be accomplished without politics. But our efforts have so far failed to impact politics on the scale of what’s necessary. There is a gap between what we do on the ground and the political willingness to create the policy environment in which climate solutions can take root. When it comes to youth, the mobilization gap is most dangerous. It’s essential that political leaders feel the urgency and risk that only a young person can know.

As a result of the mobilization gap, politics has become distant from the people. But I refuse to believe that we are doomed to a world in which youth voice never permeates the halls of decision-makers. The challenge now is to close the mobilization gap by inventing new modes of action that channel popular commitment into political pressure. It means finding new ways to influence politics while holding elected officials accountable for their actions. As a Nation Fellow this year, I’ll be working on a book that explores concrete solutions to this challenge: How does the climate movement become a more effective grassroots political force?

My delegation, SustainUS, often gathers to sing a song by climate artist Rachel Schragis that includes these lines: “There are some places you’ve been that I have not been to. There are some places that we have not been to yet. Everywhere I go I see a different situation.… but everywhere we are we know the same thing.” As we sing, people hum and create a beat with their hands. My friends close their eyes to feel the presence of vibrant souls, gathered together, sharing the pain, rejoicing in the inspiration and solidarity.

The lack of political action on climate change has not destroyed young people’s joy and passion. But we have banged our heads on the doors of political intransigence for far too long. It’s time to figure out how we become a powerful movement with agency and effective political power. When it comes to having an impact on our political system, having our voices heard, holding our leaders accountable—there are some places that we have not been to yet.