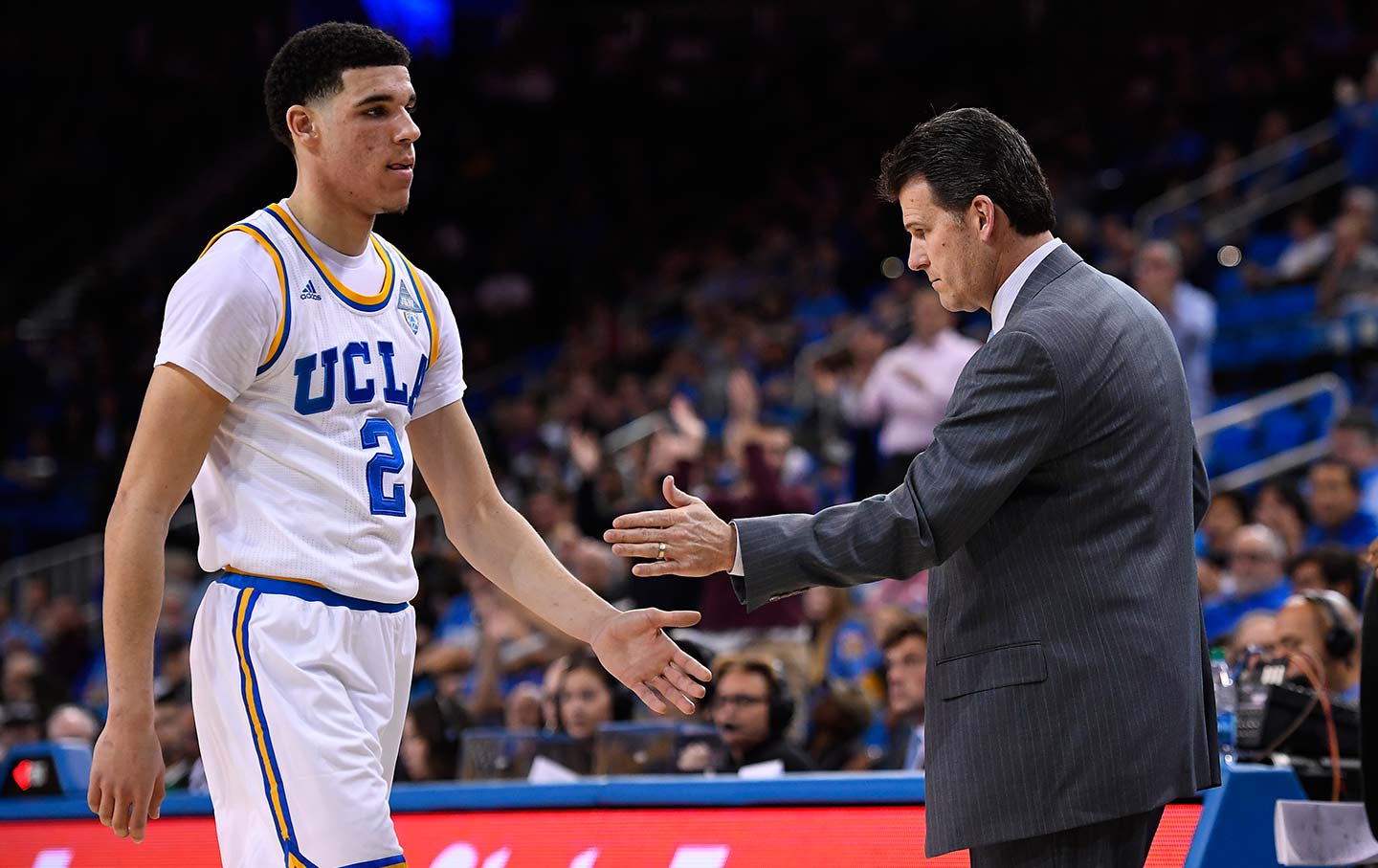 The quote of this year’s NCAA tournament was spoken before a minute of action took place on the court. Lavar Ball, the garrulous hype-man/father of UCLA star freshman Lonzo Ball as well as upcoming prepsters LaMelo Ball and Liangelo Ball, was asked if he believed that he was “exploiting” his sons. His response: “What do you think UCLA is doing?” Half the sports commentariat reached for their fainting couches and the other half said, “Damn right.”

Nothing unites the cynical and the saccharine quite like March Madness. It’s a time for “bracketology,” office pools, crash courses in three-point percentages of schools you didn’t know existed and of course the articles that cover how exploitative this operation remains—alongside bromides about how this is the greatest experience in the world for these “kids,” and paying them would be like telling them that Santa Claus isn’t real. (My rule is to just ask the players, and 10 times out of 10 they will share their thought that they would rather be paid… than not.)

There is also the extremely important observation that Patrick Hruby of ViceSports outlines here, that you cannot separate our own willingness to accept this grotesque, constitution-free system from racism—to affect the attitude crystallized by Fox Sports’s Colin Cowherd, who said, “I don’t think paying all college athletes is great, not every college is loaded and most 19-year-olds [are] gonna spend it—and let’s be honest, they’re gonna spend it on weed and kicks. And spare me the ‘they’re being extorted [sic]’ thing.”

Racism allows this system to persist, but the economic root of this exploitation is bracketology itself, those print-outs and betting pools that has turned the interest in this amateur endeavor into a happening to rival the Super Bowl. The NCAA tournament went to 64 teams in 1985, the first year of the modern bracket. This was also the year of perhaps the most compelling run in tournament history, when the underdog Villanova Wildcats beat the almighty Georgetown Hoyas by two points, shooting an unreal 78 percent from the floor. The 1986, 1987, 1988, and 1989 finals were similarly heart-stopping, decided by an average of 2.5 points. Couple that with the early round upsets and the chaotic nature of a sports event where the basketball fanatic had about the same chance of picking winners success as someone who chose their final four teams on the basis of the coolest mascots (which explains my enduring belief in the Coastal Carolina Chanticleers) and we had ourselves a national phenomenon. March Madness is a billion-dollar annual operation, responsible for 89 percent of the NCAA’s operating budget, paying for the six- and seven-figure salaries of the people patrolling their $50 million headquarters in Indianapolis.

This nexus of labor exploitation and bracketology is seen most clearly when we look at coaching salaries. The five highest-paid coaches in this year’s tournament—Duke’s Mike Krzyzewski, Kentucky’s John Calipari, Arizona’s Sean Miller, Kansas’s Bill Self, and Michigan State’s Tom Izzo earn an average of roughly $5.6 million a year, with Coach K’s $7.3 million annual take on the top of this particular pyramid. In 1984, the average coaching salary was closer to $50,000 than $5 million. John Wooden, who coached UCLA to 10 championships in 12 seasons, and retired in 1975, never made more than $35,000 a season. I asked UCLA all-time great and Wooden protégé Kareem Abdul Jabbar how much Wooden would make if he coached today, and the normally taciturn Kareem laughed and said simply, “They couldn’t afford him.”

Take a step back from this, however, and it is utterly stunning. The highest-paid college coaching job in 1975 was valued at $35,000 a year. In 2017 dollars, that would be an annual take of $159,000. The cult of bracketology has taken a $159,000-a-year job and turned it into one that pays $7.3 million. Cable-television contracts, sneaker money, and Madison Avenue have all chased our obsessions with brackets and the attendant madness of March, flooding the operation with capital. Yet the reasons coaching salaries have exploded are less important than how little change that has produced for the players themselves.

If the economic structure of this thing we call amateur college basketball has altered so dramatically, the situation of the players is painfully similar to the days when Kareem patrolled the paint at Pauley Pavilion. In fact, the most tangible differences for players, compared to Kareem’s days, are that they travel greater distances, play more games, risk more injury, and have less flexibility in terms of the classes that they can take. In other words, as the money has become greater, the level of exploitation has increased. As Kareem himself wrote for Jacobin magazine in 2014, “Life for student-athletes is no longer the quaint Americana fantasy of the homecoming bonfire and a celebration at the malt shop. It’s big business in which everyone is making money — everyone except the eighteen to twenty-one-year-old kids who every game risk permanent career-ending injuries…. in the name of fairness, we must bring an end to the indentured servitude of college athletes and start paying them what they are worth.” Kareem is absolutely correct. Without a massive organizing effort of players themselves, they will never have a seat at this table. They will remain—like characters sprung from the mind of Rod Serling—the workers who prepare the meal and are the meal itself. As we fill out our brackets, remember that our office betting pools are the most economically above-board part of this entire operation. The NCAA is is a zombie system, feeding on the flesh of the people they are supposed to be educating. It’s an operation that needs to be wrecked and rebuilt, not just for the good of the players but for the good of the rest of us who are complicit in this madness.