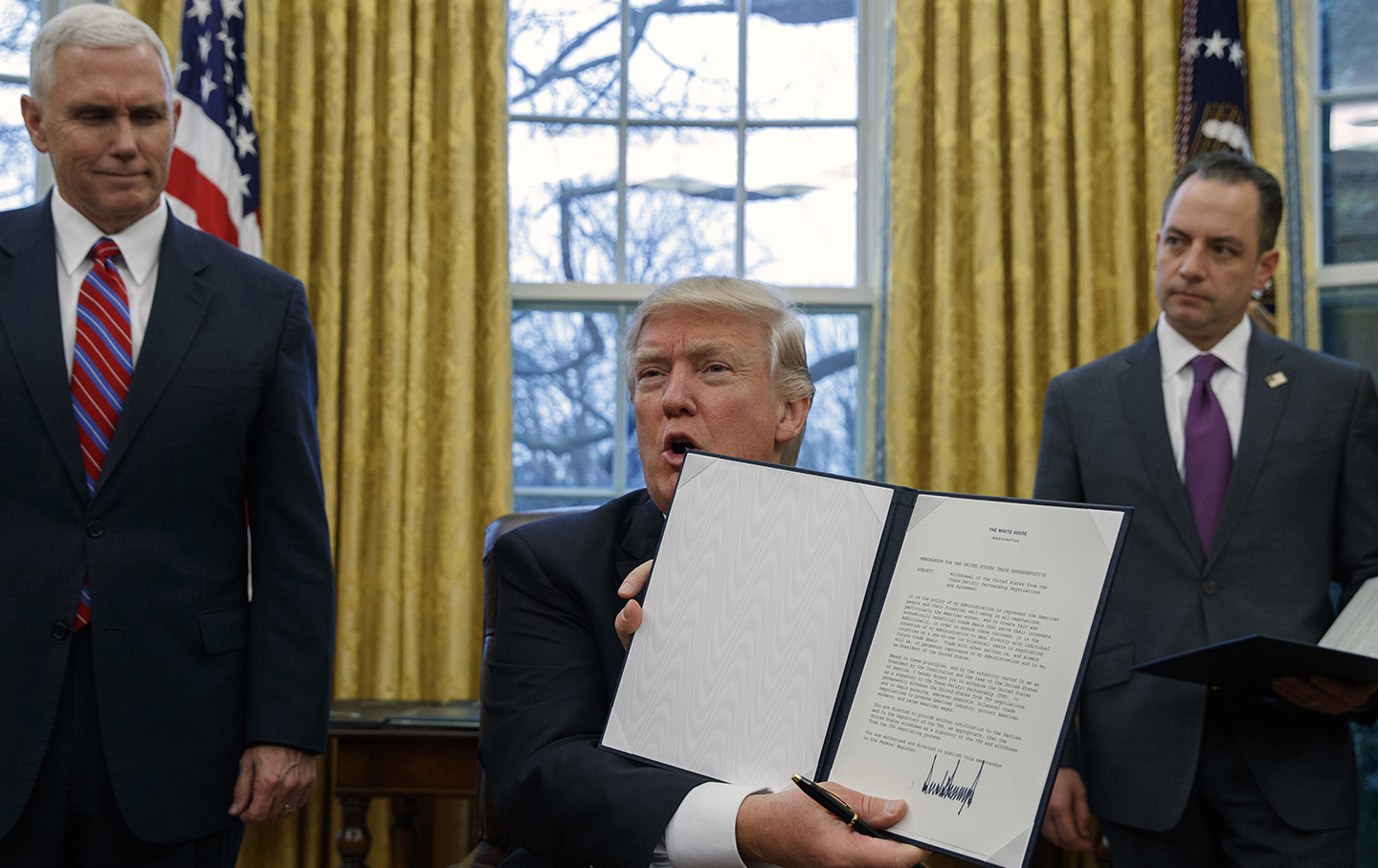 President Trump seemed to make good on the big promises of candidate Trump this week with declarations of sweeping executive actions against two massive trade agreements. Reflecting his nationalist campaign platform, he ordered withdrawal from pending final negotiations for the Trans-Pacific Partnership (TPP) deal, linking a dozen Pacific Rim nations, and announced plans to renegotiate NAFTA, the Clinton-era pact that governs trade with Mexico and Canada.

Promises kept? Trump’s inaugural vow to cure “American carnage” by unraveling trade pacts, along with implementing other “America first” measures, evokes deep skepticism from “free trade’s” progressive critics. The left has battled neoliberal trade treaties since the start of the World Trade Organization, independent of Trump’s crusade: The deals are historically associated with systemic patterns of job hemorrhaging, economic destabilization, and outsized multinational profits. And prior to the election, there was long-standing bipartisan opposition to the TPP, which would have expanded NAFTA’s misery, with a few more regulatory bullet points, across 40 percent of the global economy.

But on Trump’s forthcoming reforms, Arthur Stamoulis of the grassroots coalition Citizens Trade Campaign says, “There’s good reason for skepticism that he’s going to prioritize working families’ voices and workers’ advocates, let alone environmental advocates, safety advocates and others over the corporate voices in his own cabinet and on K-street.” In fact, Trump’s trade agenda might just provide a replacement of the much-maligned deals that leave workers less secure and corporations more empowered.

His erratic trade agenda so far revolves around pro-corporate tax cuts and destroying perhaps three-quarters of government regulations. In short, a Trumpian post-NAFTA era could undermine those same protections that US workers associate with their pre-NAFTA jobs.

And are there any jobs to “bring back,” as Trump claims? If jobs do reappear, they’ll probably resemble more closely jobs imported from Global South sweatshops, rather than jobs exported in the 1990s that have now vanished worldwide, under waves of corporate expansion and structural economic shifts. Trump’s threats to punish certain corporations (demonstrated with well-publicized selections of factory workers) seem driven by publicity and vendettas, not the public interest. His recent threat of levying punitive taxes against offshoring companies was publicly dismissed as political chatter by his commerce-secretary pick, coal-baron Wilbur Ross, as Dave Dayen reports. Trump reportedly wants to match planned tariff hikes with massive tax breaks for high incomes, essentially forcing taxpayers to subsidize bosses’ investments that, will somehow revive manufacturing jobs, if Trump’s wild promises can be believed.

Here’s the real crisis: Those jobs haven’t been stolen but smothered by ruthless corporate capture of government and markets. Under more pro-business trade deals, it won’t be jobs “returning” from overseas but, rather, more desperate workers crossing militarized borders. As Trump prepares to construct his fantastic Mexican “wall,” his new trade rules threaten to deepen transborder exploitation by expanding a liminal underclass of criminalized migrants.

Trump’s vague orders, however, belie daunting complexities: It’s simple enough to withdraw from a not-yet-finalized TPP, but for a serious renegotiation of NAFTA’s framework, Citizens Trade Campaign, Public Citizen, and global allies propose a real alternative system centered on a public bottom line for globalization, which clashes sharply with Trumpism.

Advocates demand abolition of the current investor-state dispute mechanism that is used to adjudicate trade disputes in many multilateral trade deals, which has for years let companies undermine essential environmental and health regulations in the name of “opening markets.” Though recent trade deals have involved more regulations than NAFTA, they typically lacked effective enforcement mechanisms that promote concrete protections for abused workers, in contrast to the robust civil-dispute tribunals used by corporations to suppress generic medicines or grab communal farmland.

A socially conscious global-trade regime must include a transparent legal infrastructure, based on progressive labor standards, from minimum wage to occupational safety; transparency in supply chains to ensure component parts aren’t made in substandard conditions; and universal standards across markets for food safety and the stabilization of community agricultural resources to ensure food security. Prioritizing public health over global pharmaceutical monopolies, medicine patents wouldn’t be governed as branded “intellectual property” but instead provided according to societal need to “promote the human right to health and ensure access to medicine for all.”

Global-justice activists demand that treaty partners adhere to an international framework (they are not isolationist), but this should depend on “each participating country adopting, maintaining, implementing—and enforcing —domestic laws” that reflect overarching international human rights, including International Labor Organization, Paris climate agreement precepts.

Trump’s impulsive NAFTA-trashing by fiat, however, accompanies an agenda that, while largely incoherent, consistently flouts human-rights values: Another part of his “job creation” plan involves building destructive fossil-fuel pipelines—cynically appealing to traditional blue-collar unions at the expense of indigenous communities and the environment.

A new NAFTA constructed by corporate leaders could make the system even more regressive, Stamoulis says—as future trade deal-making enters the financial sector, for example. “If Wall Street gets to push their deregulatory agenda, we could see less financial stability, more financial crisis.” Yet the global “movement of movements” opposing status-quo trade deals is not “anti-trade.”

Though protecting American workers and consumers is key, Stamoulis says, “that does not mean that we buy into this narrative that…it’s the US against the rest of the world when it comes to trade policy. We understand that the problem with our trade policy has mainly been multinational corporations against majorities in every country. [New trade rules] lifting labor standards, or lifting environmental standards, or improving quality of life for people globally…is the best way to create markets for US products, the best way stop and reverse this race to the bottom.”

Rather than tweak tariffs under a White House ruled by financial and real-estate giants, fair global trade and economic principles would foster integrated social protections. Strong consumer and labor safeguards intrinsically destroy incentives for multinationals to shift capital overseas to exploit vulnerable environments and communities, and globalization’s radical promises, not its malignant byproducts, can be realized.

When we talk of bringing jobs back, people’s movements need to grapple with the need to innovate and redistribute resources to overcome the precarity globalization brings. That doesn’t mean, however, that economic security is extinct.

A fair-trade partnership would be a social contract, not a commercial one, that links workers, communities, and democratic movements in solidarity; instead of seeking universal deregulation, it would harmonize countries under shared standards that honor a global social and environmental commons.

Trump’s economic-nationalist agenda is poised to swap a bad transnational trade system for an even more regressive one. But the real borders we need to cross are those dividing workers, and the only walls we need to build are those that fortify social justice.