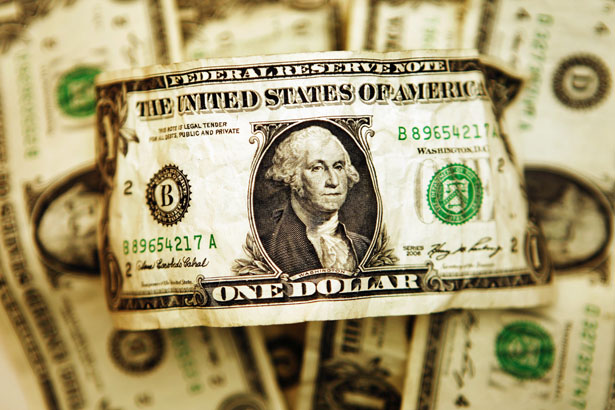 Last week, Marriott launched a campaign to encourage its guests to tip the housekeepers who clean their rooms every day. Tipping hotel cleaners is considered good practice, even if many people don’t know it—somewhere around 30 percent of Americans don’t tip these workers. (It’s recommended that you leave between $1 and $5 for each day.)

Marriott is, of course, a highly profitable hotel chain, bringing in $364 in net income for the first half of this year and $626 million in profits last year. If it wanted to make sure that its employees made more than the current $8.30 an hour, it could simply pay them more. Many pointed out this fact (myself included) when the announcement came out. By making it customary to tip, employers get away with shifting the cost of a decent wage onto us consumers. It’s even built into our federal minimum wage laws: tipped workers like waitresses, taxi drivers and bartenders can be paid just $2.13 an hour, not the $7.25 floor for everyone else, so long as their tips make up the difference. That’s a real discount for employers, and they have fought mightily to keep things this way—against raising the tipped minimum wage, which has stayed at its current level for two decades. By comparison, hotel housekeepers are lucky, in that they must make at least minimum wage.

But those who have called for us to boycott tipping hotel workers as a way to push Marriott to pay a fair wage are taking things too far. At New York magazine, Annie Lowrey argues that “tipping is a terrible, terrible custom, and as such, this is a terrible, terrible way to shunt these workers a little more money” and asks, “Why introduce a new class of workers to the phenomenon at all?”

Here’s why: Because all that failing to tip will do, in the end, is hurt the workers themselves.

Yes, tipping sucks in lots of ways. Tipping doesn’t actually rewarding good service, as we like to think. The perception of service quality only accounts for about a percentage point in the difference between tip sizes. Instead, it perpetuates sexism and racism by rewarding attractive, young, large-breasted, blond and petite women over others and white servers over black ones.

But many low-wage workers survive on tips. Withholding your gratuity doesn’t change the rules employers face when determining what base pay to grant their workers. It just means that employees are bringing home less. Yes, employers are required to make sure tipped workers still bring home at least $7.25, regardless of tips, but many don’t. Tipped workers are already twice as likely to live in poverty and restaurant servers in particular have a poverty rate nearly three times the overall rate. The loss of an extra 20 percent of the bill could be devastating.

In the case of hotel housekeeping, workers are doing literally backbreaking work to clean your room for very little. Median pay for all maids and housekeepers is $9.41 an hour, or just $19,570 a year. Hotel workers have a 40 percent higher injury rate than other people who work in the service sector, and most of that is for housekeepers, who have a 50 percent higher injury rate than their other hotel coworkers. About 80 percent of them report work-related pain, unsurprising given that they have to lift, bend and twist with heavy loads, get down on their hands and knees to clean. And the grind is getting worse, not better: workers report that their employers are requiring them to clean ever-more rooms in one shift.

It may feel more customary to tip the bellhop for bringing your luggage to your room or the car valet for getting your vehicle from the garage, but that’s probably because their work is visible to you. Housekeepers are working much harder, but you rarely see them face-to-face. Invisible work still deserves a tip. And the (most likely) women who clean your room deserve a tip as much as the (most likely) men who park your car.

What we need is an “and” response, not an “or” response, to something like Marriott’s campaign. We need to push the company, all hotel chains, and in fact all employers to pay a living wage. And we need to push to raise the federal minimum wage so that all workers have a more secure wage floor beneath them. And, while working on these goals, we need to keep giving people tips. Until we live in a world where all work pays well and we’ve abolished the practice of tipping—certainly a world that is far off from our current one—we have to do it. The theoreticals against tipping may be strong, and doing it may be inconvenient, but it is often a lifeline for the person on the receiving end.