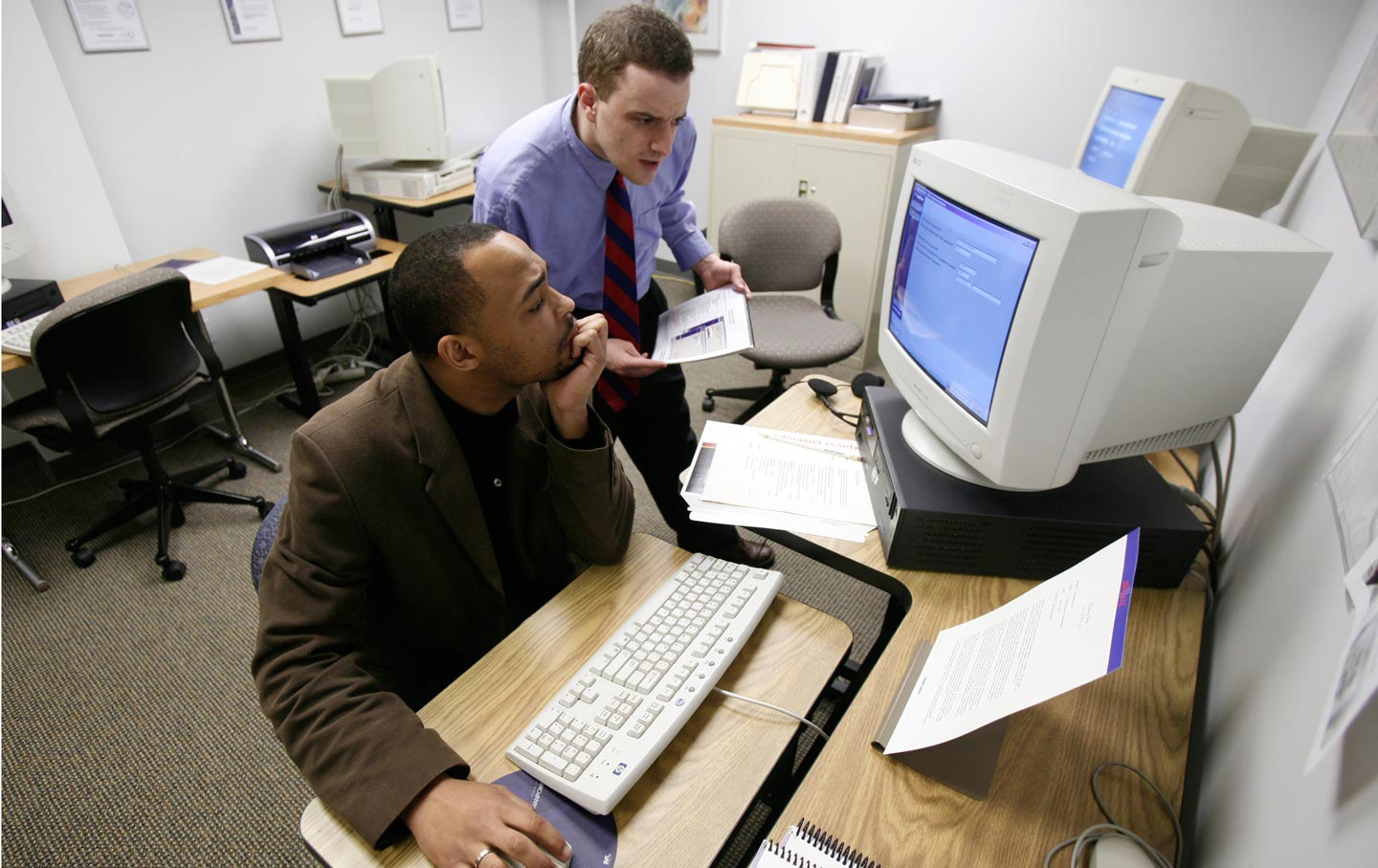 A Manpower staffing specialist administers a test to Kyle Scott as he signs up with the temp agency in Park Ridge, Illinois. (Reuters / John Gress)

If you’re a temp worker, you likely live day by day, without a steady income, regular work schedule, and virtually no job security—never knowing when or where your next job begins or ends. But thanks to a new ruling from the National Labor Relations Board (NLRB), the world of temp labor may soon provide one benefit that could transform a paycheck-to-paycheck gig into a job worth holding on to: a union card.

In Miller & Anderson, the NLRB overturned a Bush-era precedent by ruling that temporary workers, hired through a subcontracted staffing agency, may seek to unionize under the parent company that the subcontractor serves, as long as the workplace and working conditions are shown to be controlled under a “joint employer” arrangement, with multiple firms operating in tandem. So although temps are technically employees of their staffing agency, in many cases they could still unionize with workers hired under other firms, in the workplace where they’re assigned. This significantly strengthens efforts by temps to seek union representation at their assigned sites, even workers who were technically hired by other companies but work alongside the regular staffers, doing comparable work, under one roof.

Under this framework, the NLRB ruled, “Employer consent is not necessary for units that combine jointly employed and solely employed employees of a single employer.” Rather than seek their bosses’ approval before unionizing, workers can initiate unionization efforts on their own terms, if they share a “community of interests,” which is based on workers’ common labor conditions and job roles, rather than legal ties to a specific company.

“Maybe you don’t have one employer that’s controlling everything, but you can say that we’re all working in the same place, we work under the same conditions,” explains Teamsters California Political Director Doug Bloch. “We might have different employers but we have a shared community of interest when it comes to collective bargaining or to organizing.”

This intuitively rational standard for determining the nature of an employment relationship helps address the “who’s the boss” issue in subcontracting, by simply letting workers answer that question: Workers doing the same job should have the same rights, even if their paychecks come from different companies.

The decision rounds out the legal framework established in last year’s landmark ruling in the Browning-Ferris case, involving a recycling plant that employed both permanent and subcontracted workers. The NLRB recognized the subcontracted employees’ rights to raise grievances against the parent firm over issues of unfair labor practices and collective bargaining rights. The Miller ruling solidifies subcontracted workers’ right to initiate and organize a collective bargaining unit in a way that reflects the power structures within their everyday work-lives. This could be a powerful check against the expansion of precarious, unstable, irregular jobs, which often disproportionally impacts women and people of color.

According to Catherine Ruckelshaus, program director of the National Employment Law Project:

The previous requirement that [employers] had to consent to a single bargaining unit effectively foreclosed any real bargaining opportunities for workers with different direct employers working side-by-side…. [This] lets employers know that simply inserting a temp or staffing or other contractor between it and its workers is not going to absolve it of its responsibilities to ensure fair workplace conditions.

But making temp gigs stable jobs runs counter to the whole temp business model, in which precarity is the main selling point—on demand, “flexible” labor that plugs any labor shortage on the cheap, and if necessary, sticks around as “permatemps” that do all the work of regular employees, with none of the usual legal protections.

The NLRB, however, recognized that the Bush-era precedent had “allowed employers to shape their ideal bargaining unit, which is precisely the opposite of what Congress intended.” The crux of federal labor law is that collective bargaining rights aren’t granted at the boss’s discretion; they’re intrinsic to the social contract embedded in a system of free labor, if the employee-management relationship is clear.

The Miller ruling could boost incipient organizing efforts among increasingly tempified low-wage sectors, including warehouses, healthcare, and industrial farming under some of the country’s biggest brands.

Bloch says he’s seen the temp labor crisis first-hand at Taylor Farms in Tracy, California, as the Teamsters have struggled for years to organize a farm workforce divided between temps and permanent hires. While Taylor Farms’ neighboring farm in Salinas does have a union (with significantly better working conditions—underscoring the difference a union makes), the management of the Tracy farm’s mixed temp-permanent workforce has resisted unionization efforts and subjected them to harsher conditions, lower wages, and anti-union retaliation. A new California law has offered some relief by extending labor protections to temps, obligating employers to “share…all civil legal responsibility and civil liability” on wage regulations and preventing abusive subcontracting to skirt labor laws.

According to Bloch, the Browning-Ferris and Miller rulings could shift the balance of power in a temp-driven workplace. With these new federal and state standards established, Teamsters have gained a clearer legal pathway to unionize all subcontractors and direct-hire workers at farms like Tracy, based on their shared “community of interest,” with the aim of matching the working conditions the Teamsters brokered at the already-unionized Salinas farm:

This more recent ruling…really takes away some of the incentives for an employer to use temp agencies. Because the whole incentive is, ‘I don’t have to take responsibility for my worker when it comes to making sure that they get paid the wages that they’re owed, or that they have a healthy and safe work environment, or I don’t have to take responsibility if they want to organize a union.

So for the growing portion of the workforce who are stuck at temp jobs but continually denied benefits and job security due to their “second-tier” status, labor’s highest legal authority offers them a chance to finally define for themselves who their boss is. For all workers laboring alongside each other, the ruling could let them assert their rights as facets of one production chain, with one unified stake in getting their fair share of corporations and subcontractors’ mutually shared profits—as coworkers, and as union comrades.