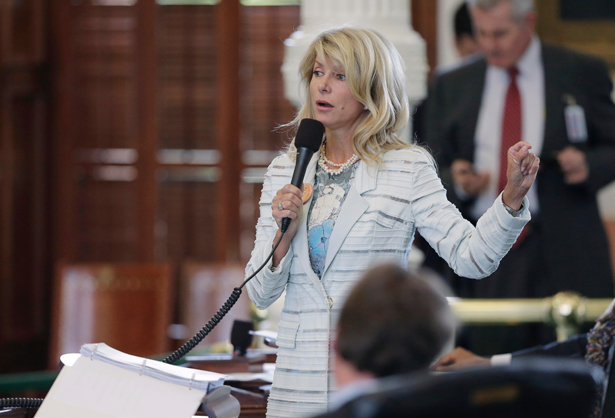 It was a rough year for women’s rights. But isn’t every year? Everybody loves Pope Francis, and yet the church continued its jihad against health insurance coverage for birth control—birth control!—and abortion, aided by business owners who think Jesus is a gynecologist. All in all, state laws placed more than seventy-five restrictions on reproductive rights. But wait—there’s a sip of champagne at the bottom of that dirty glass: California passed the nation’s only new pro-choice law, permitting certain nonphysician health professionals to perform nonsurgical abortions. And thanks to the Affordable Care Act, millions of women are getting birth control with no co-pay.

1. The indefatigable Texas State Senator Wendy Davis staged an eleven-hour filibuster of the state’s proposed restrictive abortion law, with hundreds of spirited activists cheering her on. Leticia van de Putte uttered the immortal line: “Mr. President…at what point must a female senator raise her hand or her voice to be recognized over the male colleagues in the room?” Is there a woman alive who doesn’t know just how that feels?

2. Albuquerque voters rejected a twenty-week ban on abortion, and Virginia voters elected pro-choice Democrats as governor and attorney general. When will Republicans realize that forced childbirth is not a ballot-box winner for them?

3. Elizabeth Warren stood up for the 99 percent, demanding accountability for banks, an end to credit checks by prospective employers and a raise in Social Security benefits, halting the momentum of calls for “entitlement reform.” For now.

4. Backed by a wave of grassroots support, Janet Yellen defeated the most famous sexist in America—that would be Larry Summers—to become the first woman chair of the Federal Reserve. This was a victory for all those women who have been passed over for flashier men the boss liked better. If she turns out to be as progressive on economic issues as her friend Joseph Stiglitz, there may be good news on unemployment and inequality, too.

5. The Supreme Court overturned the Defense of Marriage Act, and 84-year-old plaintiff Edie Windsor was the hero of the hour. In eight more states, gay people are able to get married, and polls now show that a majority of Americans support marriage equality. Fun fact: two-thirds of same-sex marriages are between women.

6. Alice Munro won the Nobel Prize. Six of the ten New York Times Best Books of 2013 were by women. Sheryl Sandberg wrote a book that, love it or hate it, got everybody talking about women in the workplace in ways that didn’t assume they’d rather be home.

7. Other countries proved how far behind the curve we are when it comes to women’s political representation. Michelle Bachelet was elected president of Chile for the second time, defeating Evelyn Matthei, who amazingly happened to be the daughter of a general who worked at the military academy where Bachelet’s father was tortured to death under Pinochet. Angela Merkel won a third term as German chancellor and nominated as her defense minister Ursula von der Leyen, former labor and social affairs minister and mother of seven. Park Geun-hye became the first woman president of South Korea. (Sadly, Australian President Julia Gillard, who electrified the world with a speech about misogyny in politics, was ousted from Labor Party leadership by sexist Kevin Rudd, who then lost the election to even more sexist Liberal Tony Abbott.) And guess which is the only country in the world with a female-majority Parliament? Rwanda, where almost 64 percent of MPs are women.

8. Marissa Alexander won a new trial. A black woman who got a twenty-year sentence for firing a warning shot at her abusive husband (a shot into the ceiling that harmed no one), Alexander had given birth nine days before (that detail always gets to me). Oh, Florida, what is the matter with you? You’d be funny if you weren’t so racist and sexist.

9. In another case with inescapable racial implications, 19-year-old Renisha McBride was shot and killed in the Detroit area by a white homeowner when she knocked on his door in the middle of the night after crashing her car. It took thirteen days for her killer, Theodore Paul Wafer, to be charged. He says it was an accident.

10. Kate Middleton had a baby bump, and then a baby. Within minutes, she had lost all her pregnancy weight, but now New York magazine says she is wearing a “sad, droopy ponytail.” It’s hard out there for a duchess.

11. After Savita Halappanavar was killed by sepsis in 2012, because her doctors refused to complete her miscarriage while the doomed fetus showed signs of life, Ireland passed a law permitting abortion to save a woman’s life. Well, it’s a start. In other Irish news, the McAleese report linked the government to the infamous church-run Magdalene laundries, where “fallen women” were imprisoned until 1996.

12. Women in Britain discovered their inner rebel. The website and hashtag Everyday Sexism laid bare the daily reality of misogyny for ordinary women. Massive grassroots efforts succeeded in putting Jane Austen on the ten-pound note, despite threats of rape and death against campaign leaders Caroline Criado-Perez and MP Stella Creasy.

13. Last year’s horrible rapes from Delhi to Steubenville sparked an ongoing wave of news coverage and feminist activism. Real change will have to wait till next year, though. This year, Jameis Winston, who evaded rape charges as many athletes do, won the Heisman Trophy.

14. Frozen and Catching Fire caught fire at the box office. Turns out the conventional wisdom was wrong: boys and men will go to movies starring girls and women, as long as there isn’t too much mushy love stuff.

15. Jorge Odón, an Argentine car mechanic, invented a device that uses suction to safely extract a baby who’s gotten stuck in the mother’s birth canal. He says the idea came to him in a dream.

May all your dreams be as original and brilliant and useful, and may the new year bring them all to pass.