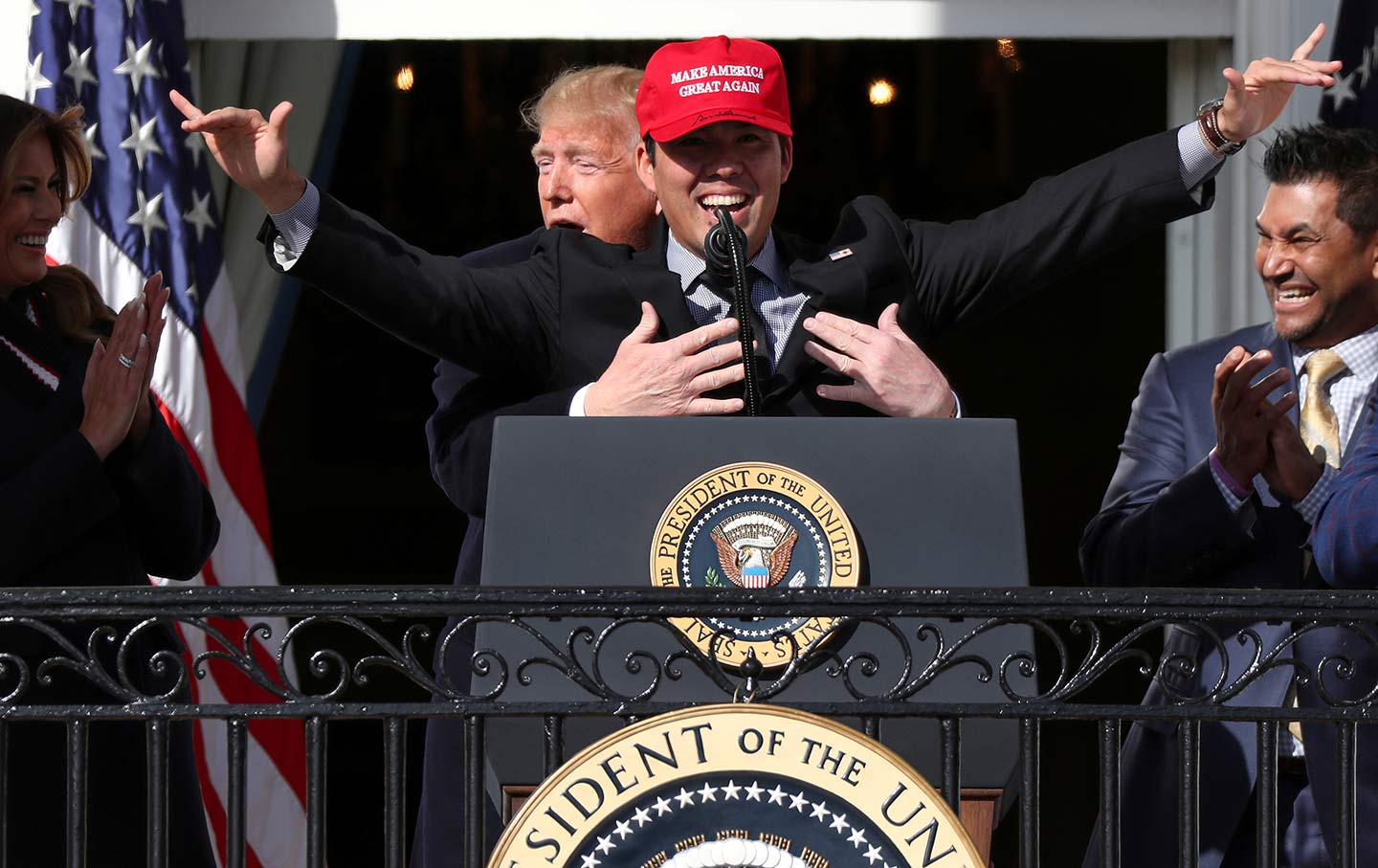 Members of the Washington Nationals went to the White House to celebrate their World Series victory on Monday, and a MAGA rally broke out. In the normally apolitical post-win ceremony, Mr. National, Ryan Zimmerman, spoke directly to Trump in his remarks, saying, “We’d also like to thank you for keeping everyone safe in our country, and continuing to make America the greatest country to live in the world.”

But even that was dwarfed by catcher Kurt Suzuki’s whipping out and donning a MAGA hat as Trump bizarrely embraced Suzuki from behind, his hands cupping Suzuki’s bosom.

NFL Player Justin Jackson: ‘40 Years of Neoliberalism Has Brought Our Country to the Brink’

When asked about his MAGA move, Suzuki texted USA Today Sports: “Just trying to have some fun. Everybody makes everything political. It was about our team winning the World Series.” As Christine Brennan wrote, “Of course, Suzuki was the one who made this political, not the people who looked on shocked.”

Why was this all so tin-eared? First and foremost, the Nationals don’t exactly represent MAGA country. Their fans—as one cacophonous entity—booed Donald Trump during Game 5 of the World Series. Those boos and the subsequent booing Trump received at an Ultimate Fighting Championship event in New York City over the weekend have sent Trump into such a tailspin of neediness that he will be attending his third sporting event in the last two weeks this Saturday in Alabama, with the hope of finally finding a sports audience that doesn’t find him odious.

The actions of Suzuki also felt like a rebuke of his friend Sean Doolittle, who refused to attend the White House celebration, saying about Trump to The Washington Post, “I don’t want to hang out with somebody who talks like that.”

As Doolittle explained to the Post, “There’s a lot of things, policies that I disagree with, but at the end of the day, it has more to do with the divisive rhetoric and the enabling of conspiracy theories and widening the divide in this country. My wife and I stand for inclusion and acceptance, and we’ve done work with refugees, people that come from, you know, the ‘shithole countries.’” That last statement was, of course, a reference to Trump’s racist description of Haiti, El Salvador, and African nations in a January 2018 meeting.

Even if Doolittle was the furthest person from Suzuki’s mind, the catcher should have at least been self-aware enough to see how his old friend and the DC masses who supported Doolittle’s principled stance would take his actions. 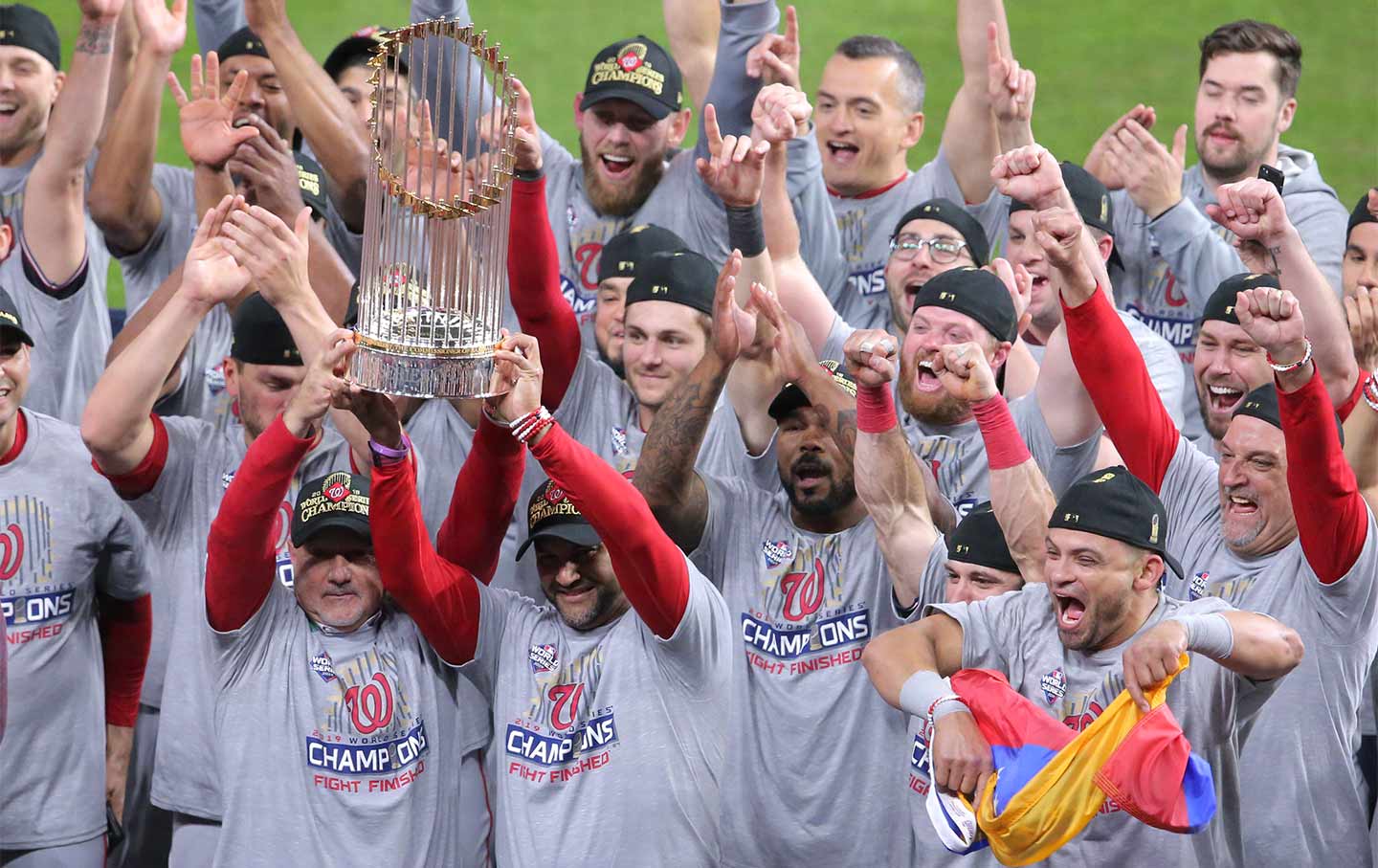 The World Series Winners Should Not Visit the White House

This is also a moment to remember that anyone looking for some kind of athletic resistance to the current administration from the world of baseball—particularly the white world of baseball—will be left wanting. This is very conservative terrain, and always has been. The game cleanses itself and its history with progressive players like Jackie Robinson and Roberto Clemente. But the heroes who stood up to their bosses in addition to speaking up about politics, like Curt Flood, have been ostracized. It speaks volumes that Flood and union leader Marvin Miller, whose fight for free agency changed the game as significantly as Robinson, are not in the National Baseball Hall of Fame, but that the commissioner who Miller dominated in every negotiation, Bowie Kuhn, is enshrined in Cooperstown.

Many Nationals fans said on social media that the team’s embrace of Trump after their the stadium’s sonorous rejection of the president diminishes their World Series win. I would argue that the players have the right to their politics, no matter how discordant with the community in which they play. But we should thank our lucky stars for Sean Doolittle, Anthony Rendon, and the others who stayed away. In the context of baseball, that’s a regular insurgency. But because a win is a win and sometimes we need a win, Washington Nationals will always be the 2019 World Series Champions. Not even Trump can ruin that.