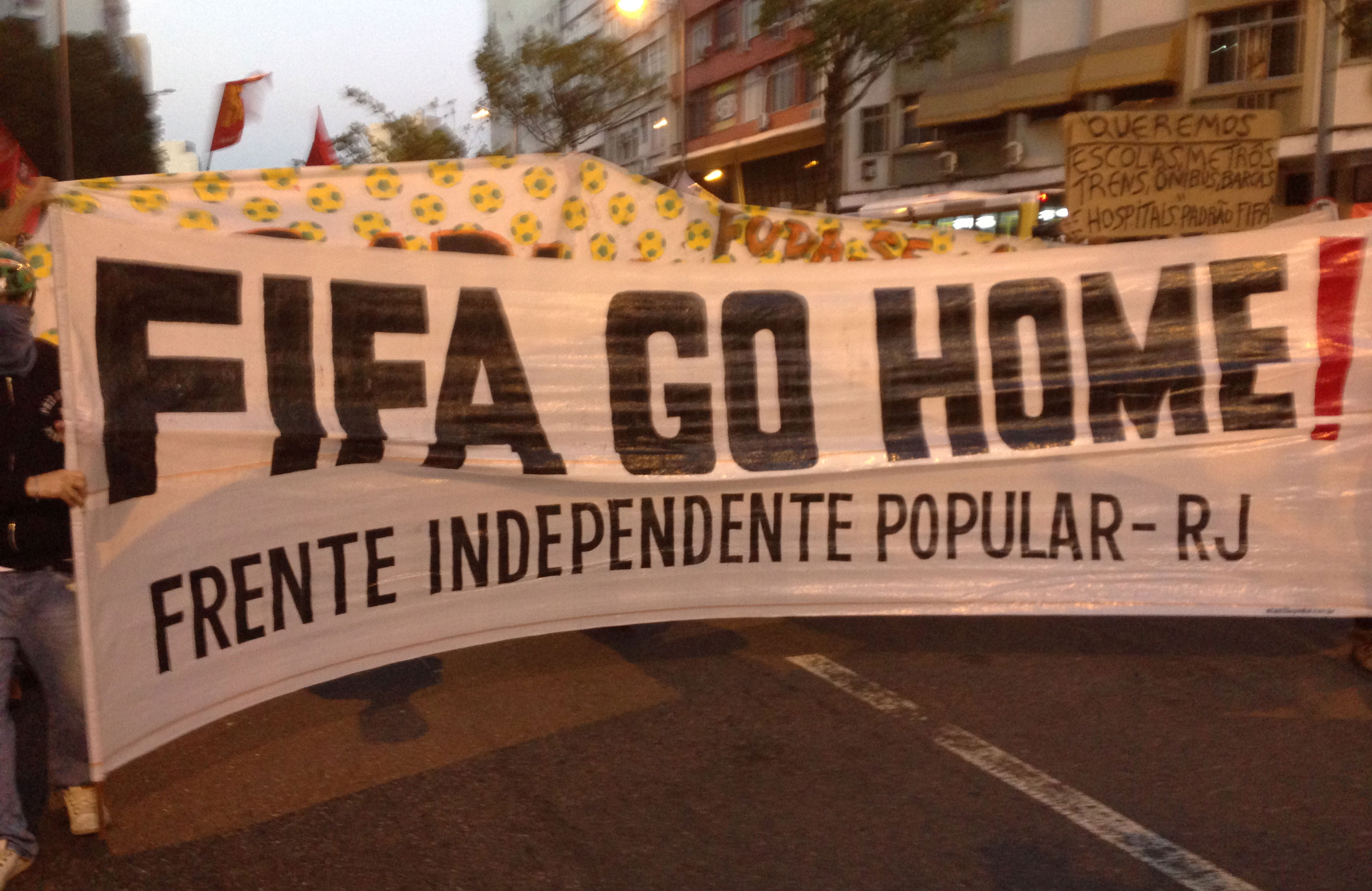 FIFA boss Sepp Blatter was strutting like a rooster over the weekend about the absence of mass protests during Brazil’s World Cup. “Where is all this social unrest?” he asked in mocking snark that, along with bribery and corruption, has become his trademark. Then Blatter waxed rhapsodic about how “football is more than a religion” in Brazil, as if that explains the absence of millions of people marching on his “FIFA quality stadiums”. Similar, sentiments were expressed by Brazil’s Deputy Minister of Sports Luis Fernandes , who said that “during the World Cup, the passion for football has taken over.”

This position has been echoed continuously in the US media. The Washington Post has carried headlines that have read, “In Brazil,smiles, parties have replaced protests” and “A nation’s haves, have nots unite for a common cause.” No need to pick on the Post, as this has been “the line” in multiple media outlets over the last several weeks.

As is often the case with the mainstream media, they have started with an indisputable truth and then have chosen to draw conclusions that match their own embedded perspective: a perspective shaped by Sepp Blatter, his broadcast partners and a blinkered reality of hotels and black SUVs. It is certainly true that the million-person protests have not taken place during the World Cup, as they did during the 2013 Confederation’s Cup. But the conclusion that now everything is awesome and “parties have replaced protests” is simply not true. I recently returned from Brazil and saw a different reality. The fact is that there are protests, strikes and battles with police happening every day. In the favelas, there are demonstrations against the police occupations that are happening because of the Cup. (Here is a terrific photo essay by Andalusia Knoll that shows images from all the World Cup protests that are not happening.)

If the protests are far smaller than the ones a year ago, it is because the streets are militarized down to the last inch, ruled by a military police force who are tear-gassing any group of people who attempt to gather and raise political demands.

I attended one of these “FIFA Go Home” demonstrations, and it was a fearful exercise in state intimidation. The gathering was at a public square. An hour before the start of the march, the square was already surrounded by riot police with machine guns in hand. One would have had to gently push aside and say “excuse me” to someone with a machine gun and a badge just to get there. This was daunting for me as a gringo journalist. Imagine if you are someone with a family, a job and a life that you had to return to following the Cup.

Then once we gathered together, the police would, every few minutes, randomly pick out someone in the crowd of 500 and search their bag. People would chant and yell at the police, but five other officers surrounded the one doing the searching, all with their fingers on the trigger of their automatic weaponry. One protester took out a horn and played Darth Vader’s theme music from Star Wars, but other than that there was little anyone could do. Then when the march was finally underway, the demonstrators were gassed by the military police. One police officer, as caught by the Associated Press, fired live ammunition in a panicky fashion over the heads of protesters. Then the riot police moved in with baseball bat–sized batons.

It was an altogether ugly exercise that provoked chants calling FIFA “Brazil’s new dictatorship.” In other words, the demonstrations aren’t bigger because the military police have created a reality that it is terrifying for people to express their dissent, all to the joy of Sepp Blatter.

Larissa, an activist from São Paulo, explained the size of the demonstrations to Al Jazeera by saying, “Some of us are in jail, others are just being cautious. During our latest protests at Rio’s Maracana stadium, fifteen of us were arrested and are now in jail. The police beat many of us…. I love football. I actually play football myself. I just hate the whole industry around it, which—in the name of FIFA—has been eating up whole neighbourhoods here in Brazil. They think they can do anything in the name of football.”

It would be helpful—even novel—if the US media would tell this story: a population angry about the Cup, but terrorized into compliance. But to tell that story one would actually have to talk to Brazilians who aren’t their cab drivers and concierges. There is still time in the next week, before the World Cup ends, for the media to wear out some shoe leather, hire some translators and tell the truth about what is happening in Brazil. With the 2016 Olympics coming to Rio, the anger and discontent over these mega-events is not going anywhere. The next two years should be a time when the stories of regular Brazilians are told and reckoned with, instead of ignored in the name of nerfy, feel-good narratives.