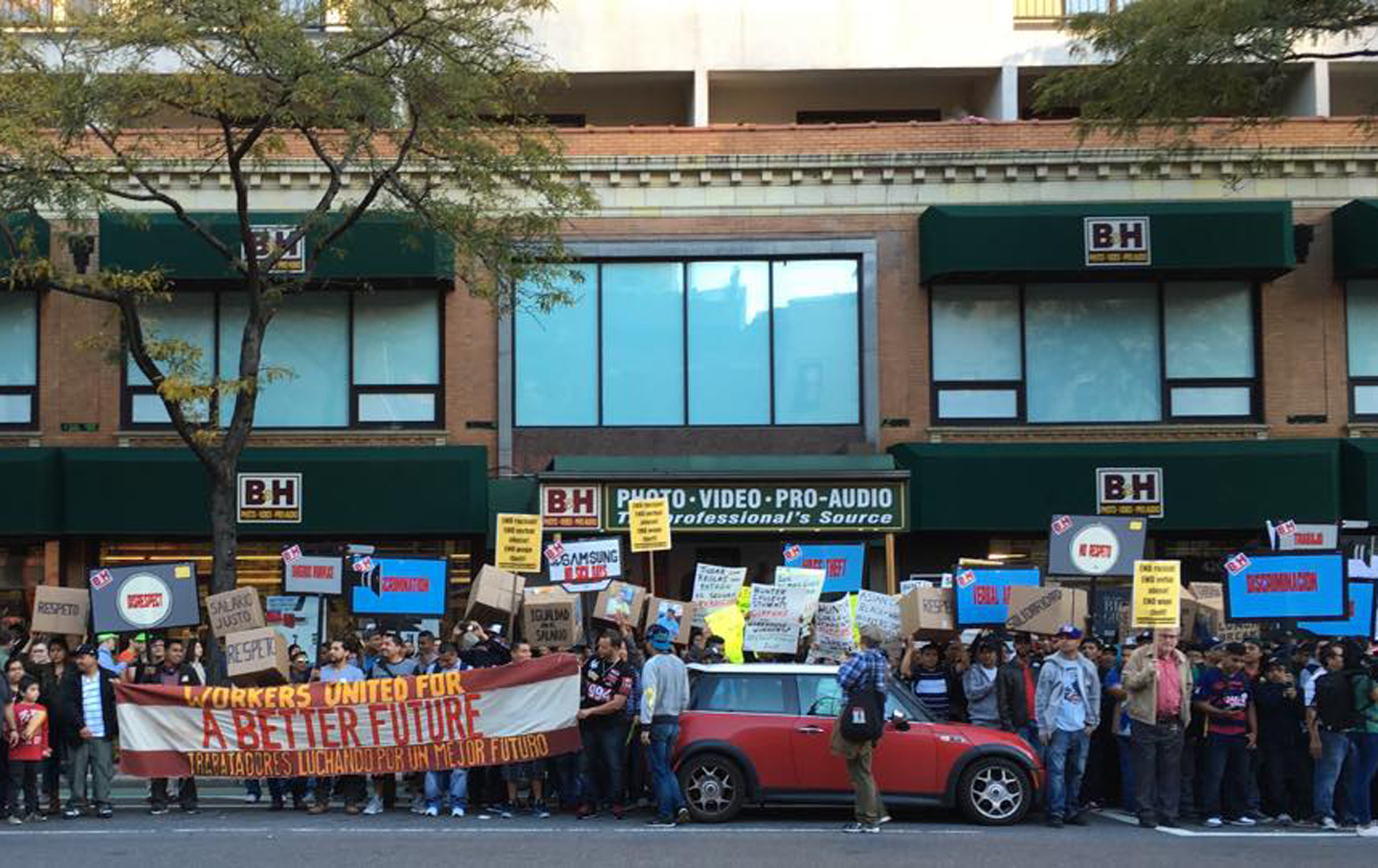 This workweek got off to an unusual start for Jorge Lora. In recent months at his workplace, a Brooklyn warehouse run by photography-equipment retailer B&H, he and his coworkers had become resigned to a miserable routine of working to exhaustion while subjected to injury, racial abuse, and wage theft. But he was surprised when he arrived this week. The atmosphere was calmer, supervisors weren’t hassling them, and, best of all, his workday was shorter: Instead of the usual 13-to-18-hour shift, he worked “only 12 hours.”

“Honestly, I was thinking that today there would be tension in the workplace,” Lora said through a translator on Tuesday. But this was the calm before the storm. He and his co-workers’ campaign to unionize the warehouse staff just launched last Sunday with a street rally and delivery of a list of grievances to management, along with an announcement of the initiation of the formal unionization process, with 199 out of about 240 workers signing cards approving the union. So far, the management has issued a few public statements denying the charges and grudgingly acknowledging the campaign. But Lora says, “We are ready for the retaliation. We know that’s going to happen. That’s not going to stop us, because we have the power.”

The workers accuse the famed photo-gadget emporium of discrimination against the largely Latino immigrant warehouse workforce. On a typical workday, according to a list of charges issued by workers and their legal counsel, workers labor several hours straight without eating or drinking, sometimes in sweltering heat. The local advocacy group Laundry Workers Center (LWC), which is helping the workers organize along with the United Steelworkers union, say a combination of economic exploitation and workplace oppression have driven staff to regularly work over-80-hour weeks. They are routinely denied rest breaks and paid sick days.

Latino workers report systematic bias in the assignment of schedules, wages, and workplace cellphone use and bathroom privileges, and that sometimes they have been hit with outright racial epithets. And with a stark divide between the largely Orthodox retail-store staff and the warehouse workforce, Latino employees say they were denied the leave schedule reserved for observant Orthodox Jews. The language barrier further silenced them, as management forced Spanish-speaking workers to sign English-only employment forms.

The claimants also allege they were exposed to “more unsafe conditions” compared to non-Latino coworkers, including blocked exits, toxic chemical exposures, and a lack of basic protections like safety hoists and gloves for handling loads. On Tuesday, Al Jazeera America reported on the struggles of several workers to cope with health problems, from severe falls to kidney stones, all linked to chronic overwork and hazardous conditions that are sadly common among poor immigrant workers. The company tended to downplay workers’ complaints of occupational injury and refused to cover medical expenses.

In an incident that helped catalyze the unionization drive, a fire outside the Brooklyn Navy Yard site last year, workers recalled being impeded from escaping by a security checkpoint, presumably to ensure they were only fleeing for their lives, not looting.

The oppressive workplace climate allegedly plunged some workers into deep anxiety and depression. Warehouse worker Oscar Orellana told Al Jazeera that since suffering a massive back injury, “Even if I feel I am dying from the pain, I have to work.”

Outside of B&H’s core Hasidic sales-floor staff, other employees have brought various discrimination claims over the years—including a discrimination lawsuit brought by Latino workers that resulted in a $4.3 million settlement and Equal Employment Opportunity Commission monitoring, and women’s claims of gender-based pay discrimination). But through its strategic publicity, the new warehouse labor dispute gives workers a bigger stage on which the shame their employer.

For Lora, B&H’s fame is a pressure point: “The most difficult part was going public,” he says, because workers “were afraid about having to fight it themselves inside the company.” Now they’re drawing support from other labor activists and are donning pro-union stickers with fellow union champions to broadcast their solidarity.

The workers feel “positive” about the forthcoming National Labor Relations Board election process, Lora says, “Because this is a giant company with a big reputation.… What’s going to happen if many customers just do not buy at the company” in response? The potential of a negative business impact is “in our strategy. If they agree to recognize the union, then we don’t have to” have that.

The company has not responded to a Nation inquiry, but defended its labor practices with a website statement touting its human-resources department’s commitment to respecting labor regulations. Though the statement did not refer specifically to the workers’ grievances, it indicated that the campaign would proceed and the company would not interfere with their labor rights: “It is a decision to be made by our employees, and there is a process underway to resolve that question.”

But that process seems to be taking an ugly turn. On Thursday, LWC blasted out a notice stating that workers at the Brooklyn Navy Yard site had been fired. B&H then tweeted back denying it had dismissed workers or that cops were deployed there. LWC continues to assert that B&H retaliated by threatening termination and forcing out workers.

LWC has wielded such Occupy-inspired rabble-rousing tactics in other local campaigns, including a dramatic union drive at a Manhattan Hot and Crusty Bakery and protests and legal battles with low-wage employers and landlords. But the stakes seem higher with in the showdown with B&H, a world-famous artisanal geek paradise with a loyal customer base and uniquely clannish Hasidic store staff. Yet the warehouse workers’ claims show that the vintage retailer’s mom-and-pop branding doesn’t immunize it from the structural bias and exploitation pervading low-wage logistics work.

Workers now hope to mobilize a united front to pressure B&H both in the public and the legal spheres. Lora hopes the campaign can inspire other low-wage workers with the idea that “unity is strength.” Employers now “have to recognize that workers have the power because in the city, nothing can move if there’s nobody working there.”

And as the warehouse labor struggles move into public light, organizers are inching toward a vision that once seemed unimaginable: a workplace where they can expect a good day at work every morning.

This post has been updated with news on Thursday’s incident.