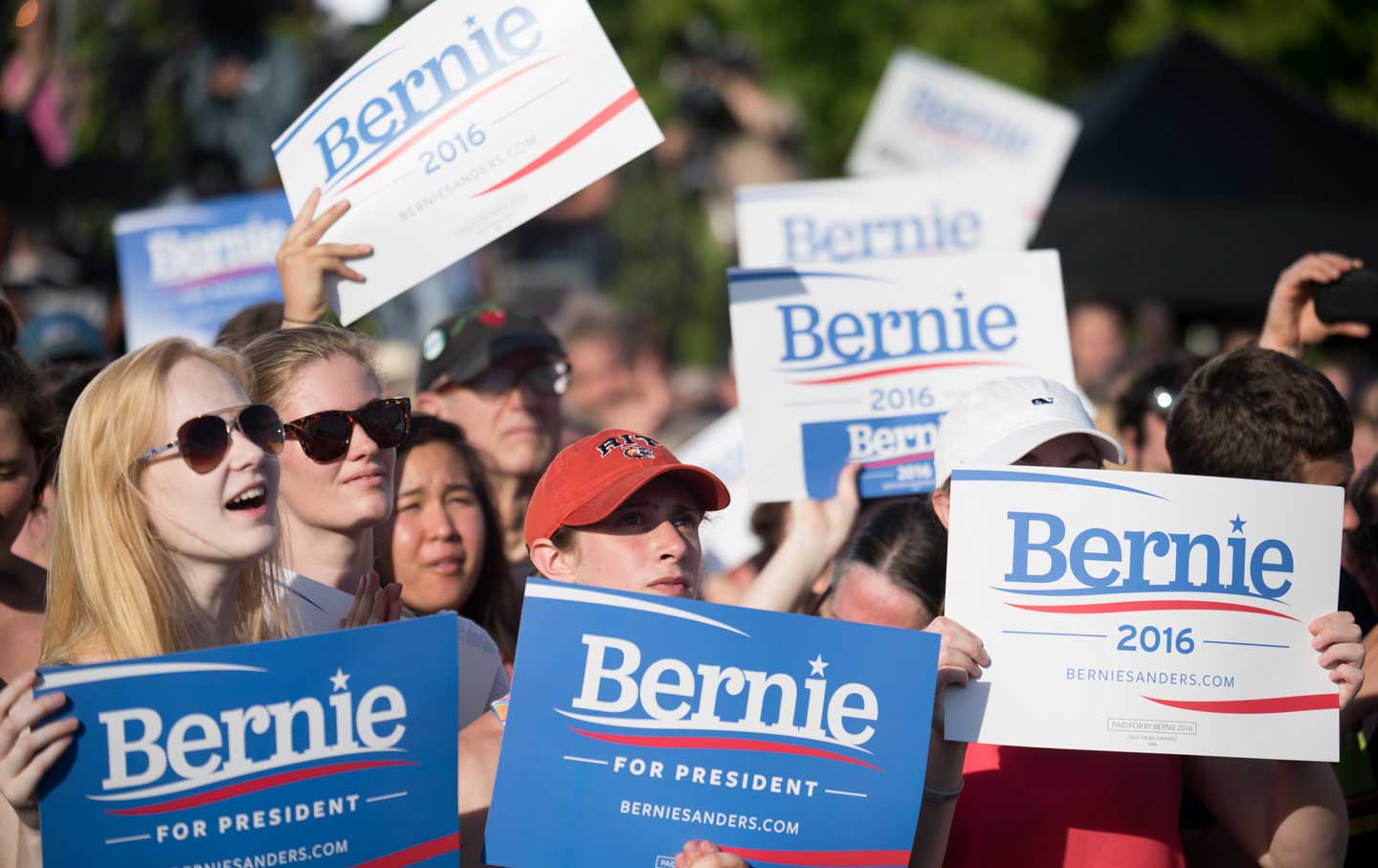 Brattleboro—There were three separate Bernie Sanders events here last night—one downtown, with neat rows of folding chairs where you could watch his online speech on a big screen in the company of local worthies, and where they had bumper stickers, buttons, and window signs available for a small donation; another upstairs at the Brattleboro Food Co-op, where the organizers had set out a selection of healthy, organic snacks; and one at local bar. I figured the co-op would be my kind of crowd—middle-class, diffident, earnest.  But it had been in the high 80s all day, and sticky, so I headed over to McNeill’s Brewery, whose cool, dark (but un-air-conditioned) interior was packed with a mix of millennials and their parents, over a hundred people holding pints of beer while organizer Pedro Pereira, a high-school Spanish teacher who tends bar in the summer, filled the time before the speech by asking people to stand up and say why they were there.

“I love Obama,” said a woman from Putney, as about half the heads in the room nodded—while the other half looked embarrassed. “But Bernie has incredible integrity. And he’s not criticizing the other candidates. He’s just telling the truth.”

Another woman, Bari Shammas, said that throughout American history, whenever people are hungry or angry, “you hear talk about pitchforks. I don’t want pitchforks.”

A large man in overalls, who looked pretty familiar with pitchforks, said, “At least Bernie knows how many teats are on a cow’s udder.”

A social worker from Greenfield, Massachusetts, stood up and said she’d recently moved east from Chicago, and the differences in mental health provision among the states made her realize how much we needed a genuine national healthcare system. Another recent transplant from the Midwest talked about Scott Walker, and how proud she was to now have Bernie for a senator. Pedro, who was born in Venezuela, told them that if they lasted through two winters here, they could consider themselves Vermonters.

“If we can elect a black guy from Hawaii, then we can elect a Jewish guy from Brooklyn and Vermont,” said Jim DeBor, from Wilmington, Vermont. “I believe we can win. But at the very least he can make Hillary go a little bit left.”

It was that note of modest realism that kept coming up, from the young woman who said, “I’ll vote for Hillary in November if I have to, but I’d much rather vote for Bernie,” to the retired IT consultant who told me he’d never thought there was any point in voting until he heard Ross Perot warning about the “sucking sound” of American jobs leaving the country with the North American Free Trade Agreement. “I saw it happen in my own field,” he said. “Perot didn’t get anywhere, and the jobs disappeared just like he said. But he stood up to the system and told the truth, and I see Bernie the same way. Of course Perot was a billionaire, and Bernie isn’t. So he needs people to make up for the lack of money.”

That was also the thinking behind last night’s events—3,500 house parties or small gatherings spread across every state, with a total audience, the campaign said, of over 100,000 supporters. When Bernie finally appeared on the monitor, I was struck by the contrast between the populist anger of his refrain—“Enough is enough”—and the calm, almost resigned, tone of the people in McNeill’s. “We have got to reverse the 40-year decline of the American middle class,” said Sanders, and I saw a woman who’d said one of her grandsons had just started work at Yankee Candle for $10 an hour because it was the only job he could find after months of looking nod in agreement.

This crowd had heard Sanders speak before, and while his call for paid sick leave and government-mandated parental leave got applause, the warmest response in this room full of overwhelmingly (but thanks to Pereira and another Hispanic attendee, not entirely) white Vermonters came when Sanders spoke about the persistence of racism, and the death in police custody of Sandra Bland—arrested, said Sanders, because she’d failed to signal a left turn.

“It’s like that South Park episode where Kyle tries to understand what it’s like for Token,” said the man standing next to me. “Bernie may not completely understand #BlackLivesMatter. But he gets that he doesn’t get it.”

After we all texted “WORK” to 82623 on our smart phones, Pereira showed me a letter he’d once sent to Sanders denouncing him for not supporting some piece of progressive legislation. “He’s not perfect,” he said. “He’s just the best chance we have to change direction.”

"He's not perfect. He's just the best chance we have to change direction."

Vicky Senni, who organized the event at the Food Co-op, was younger, and more of a true believer. “My dad’s from Syria, and I’m first generation. Politics was always a conversation in my house. So I knew who Bernie was, and what he stands for.”

That sense—universal among Vermonters—that with Sanders what you see is what you get seems, so far at least, to resonate with voters elsewhere. There is also an apprehension here about how the rest of the country—and the national press—will treat the local hero. As Senni said, “Everyone has their own reason for coming out for Bernie.  But it’s personal for all of us.”