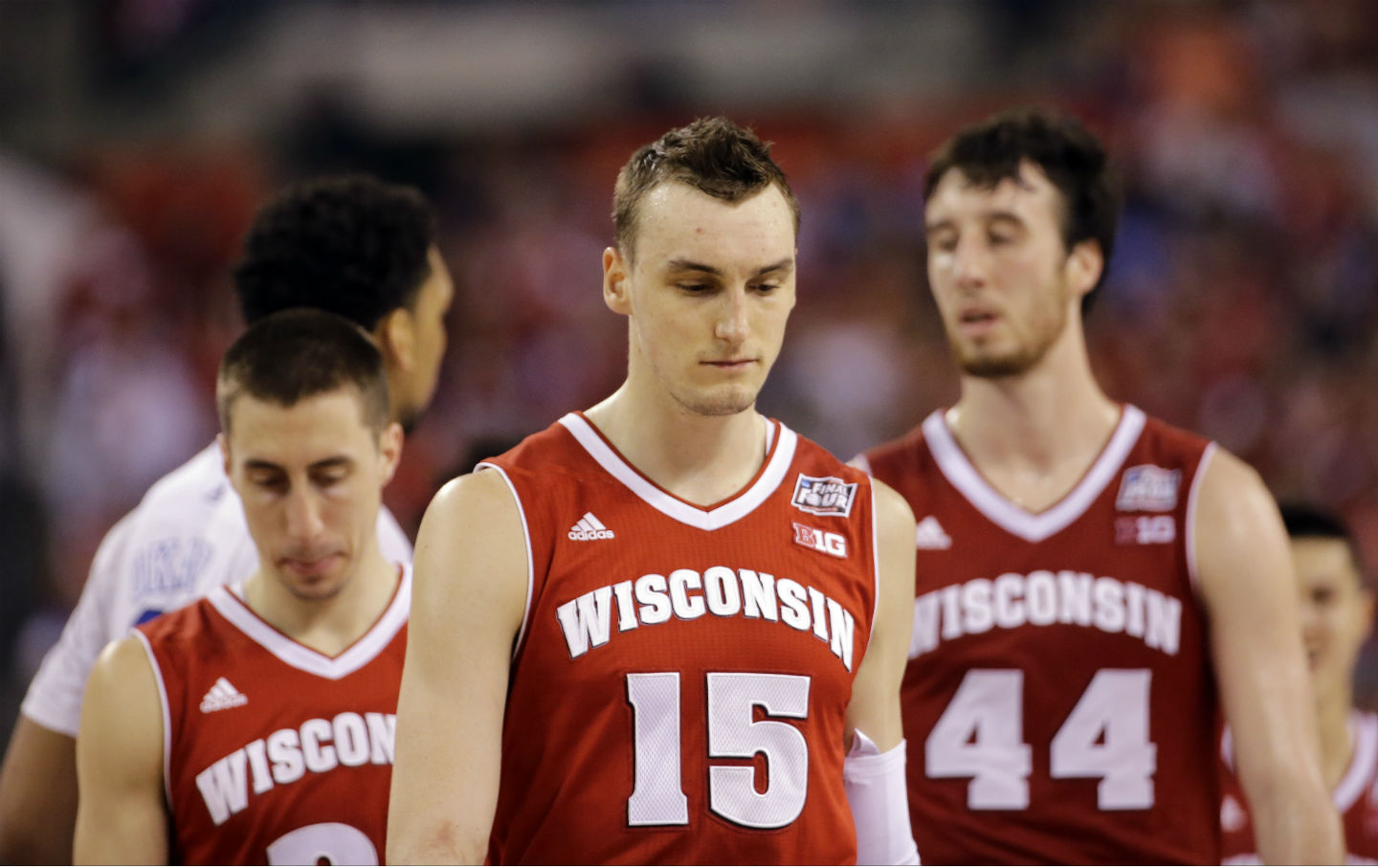 It was agonizingly close. The Wisconsin Badgers in all their public university glory almost beat big, bad Duke for the NCAA basketball championship. As an East Coaster, I’ll say that there has been a shimmer around Wisconsin sports teams that pulls me into their corner time and again. Whether it’s the “Greek-Freak” Bucks, Pack or Badgers, the last several years of pro sports (and yes, the NCAA should be seen as a pro sport with godawful salaries) has made me say time and again that there is just something about Wisconsin. There is also just something about their sports teams that for some reason compels the state’s Governor Scott Walker to truly reveal just how ignorant he believes the electorate of the United States to be. In December, it was Walker during the NFL playoffs proclaiming his undying loyalty to the Green Bay Packers, even though that is a team whose fan-owned ownership model is anathema to everything that the governor, not to mention the billionaire Koch brothers , who currently hold the receipt on Walker’s soul, stand for. For Scott Walker, the fact that members of the Packers team have actually lobbied against his efforts to crush the public unions of his state, is just a detail, as he affixes a foam cheese to his skull.

Monday night, it was the Wisconsin Badgers—who play their games a brisk walk from Walker’s Madison offices—almost being crowned as NCAA basketball champions over the evil empire that is Duke. Before the night’s contest, there was Governor Scott Walker preening about his wager with North Carolina Governor Pat McCrory, as Politico.com reported, of “an assortment of Wisconsin cheese, sausage and root beer” (The idea that the NC governor was claiming Duke as his team, a private institution where an overwhelming majority of students come from out of state, might be a story for another time).

Walker said, “Duke is a formidable opponent, but this is Wisconsin’s year to bring home the victory. Make ’em believe!” Yes, these kinds of wagers by politicians hoping for a little bit of refracted glow have been made for eons. Yet there is something almost flagrantly irresponsible about the news media—even if we agree for the sake of argument that Politico counts as news media—reporting on these wagers like it is all fun and games, while ignoring that Scott Walker has made it his mission to cut hundreds of millions of dollars from the very public university system bringing glory to the state.

This is who Governor Scott Walker is: a soulless vessel for Koch-brothers cash who in the name of a career advancement to the White House is willing to both mercilessly attack any and all expressions of public life, while at the same time using sports to shamelessly bank on what he imagines to be the ignorance of the US electorate. He does not care that Wisconsin point guard Bronson Koenig happens to be not only one of forty-two Native American athletes playing Division I basketball but also someone who opposes the use of mascots. As Brian Ward wrote here at TheNation.com, “In 2013, Walker signed a bill that makes it harder for public schools to change racist mascots and names. The law, which he claimed to support to defend the First Amendment, requires 10 percent of a district’s students to sign a petition within a 120-day period to earn a hearing regarding changing a mascot name. A spokesperson for the Wisconsin Indian Education Association called the law, ‘an example of institutionalized racism.’”

That might be one of the only “institutions” Scott Walker defends. The Final Four itself took place in a state whose hastily amended codified discrimination laws were defended by Walker even as they were condemned by the NCAA. Even as such left-wing organizations like NASCAR pilloried the bill, Walker described those who opposed it as “people who are chronically looking for ways to be upset about things.” That would actually be a good definition of Scott Walker who has never found a teacher, a firefighter or—I don’t know—a public university that wasn’t worth demonizing for his own political gain.

Wisconsin is called the Badger State not because of the abundance of the bucktooth mammal, but because it was an early nickname for the state’s miners. Walker has recalled this history when he has made efforts to increase the power of the private mining companies with their eyes on the state, no matter the cost to the environment. It speaks volumes that Walker hears “Badgers” and hears a tribute to mining and not miners. Similarly, when he hears the cheers for the Badgers in their run to a title, he does not hear a celebration of a brilliant public university but a clarion call for his own White House run. Don’t let him brand his campaign with the Badgers pride. The Koch brothers have made sure he’s already had their full agenda burned into his flesh, another governor for their collection, wearing their mark like a prize steer. Maybe someday Scott Walker will recognize the difference between branding and being branded.