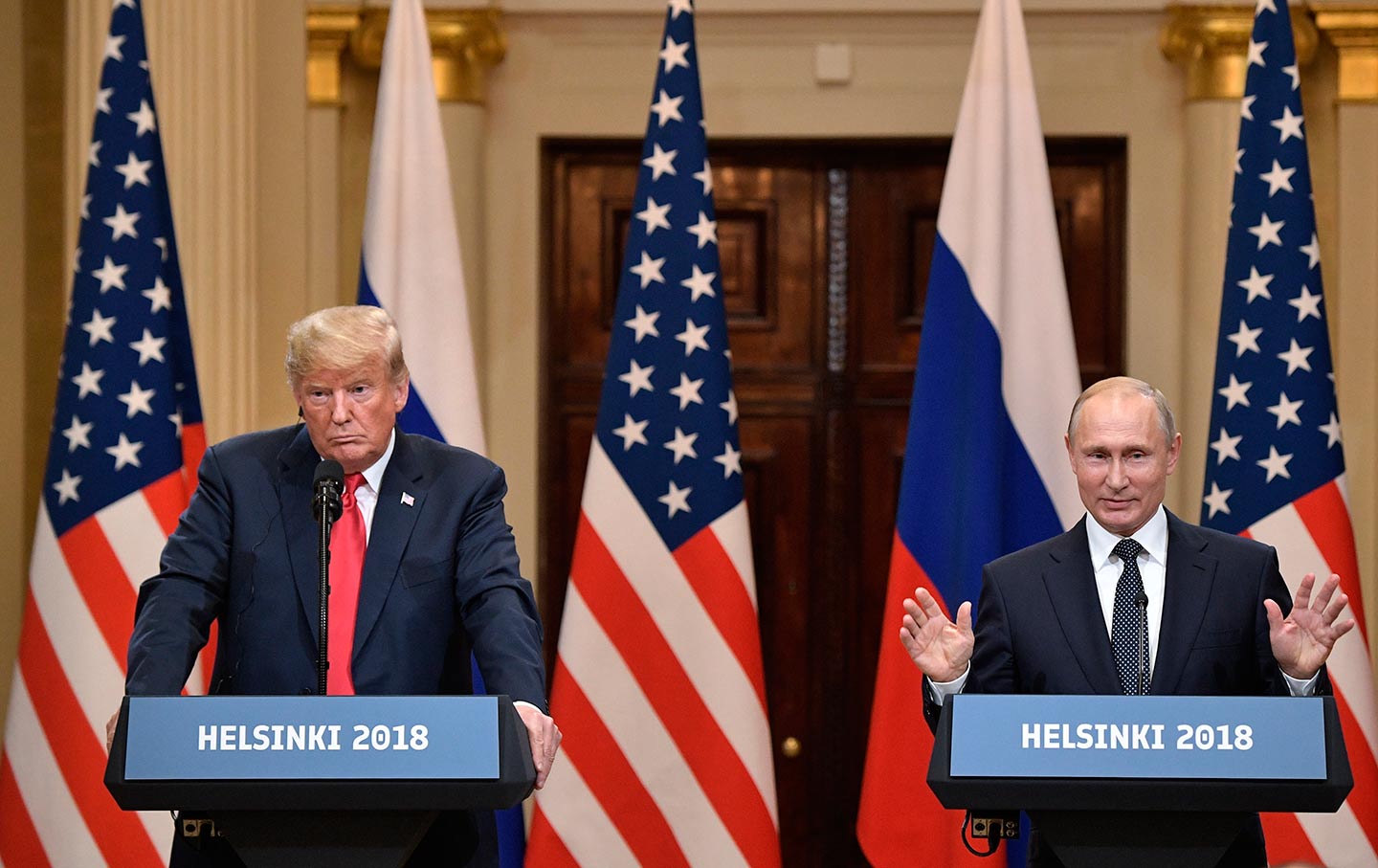 Donald Trump and Vladimir Putin give a joint press conference after meeting in Helsinki on July 16, 2018. (AP / Aleksey Nikolskyi)

It was not just Democrats but also Republicans who expressed shock after Donald Trump’s “apology tour” appearance with Russian President Vladimir Putin. The president of the United States refused to condemn Russian interference in the 2016 presidential election and instead attacked the inquiry by special counsel Robert Mueller into a host of allegations regarding political skullduggery. Senator Lindsey Graham (R-SC) called Monday’s joint press conference in Helsinki a “missed opportunity by President Trump to firmly hold Russia accountable for 2016 meddling and deliver a strong warning regarding future elections.” That was actually one of the milder critiques on a day when former CIA director John Brennan declared: “Donald Trump’s press conference performance in Helsinki rises to & exceeds the threshold of ‘high crimes & misdemeanors.’ It was nothing short of treasonous. Not only were Trump’s comments imbecilic, he is wholly in the pocket of Putin. Republican patriots: Where are you?”

A number of prominent Republicans did speak up.

Arizona Senator Jeff Flake—noting the indictment last week of 12 Russians for interfering with US elections—complained, “I never thought I would see the day when our American President would stand on the stage with the Russian President and place blame on the United States for Russian aggression. This is shameful.”

Even House Speaker Paul Ryan, the Wisconsin Republican who is famous for pulling his punches, swung hard on Monday. Arguing that “Russia interfered in our election and continues attempts to undermine democracy here and around the world,” Ryan said, “The United States must be focused on holding Russia accountable and putting an end to its vile attacks on democracy.”

Those were strong words. But so what? Complaining about the signals that this president is sending with regard to election integrity, even suggesting that Trump’s comments might encourage interference in the 2018 and 2020 elections, is just talk. It means nothing unless words are matched with deeds. No matter what anyone thinks about Trump, or about Putin, or about US-Russian relations, or about how direct and how ambitious outside interference may have been in 2016, or about what details of that interference may tell us about the legitimacy of Trump’s presidency, or about where the Mueller investigation is headed—it is simply absurd that affirmative steps are not being taken to secure the electoral processes of the United States going into this fall’s midterm elections and heading toward the 2020 presidential election.

“Not acting now will only lead to repeated interference.” —@repmarkpocan

It is stunning that a sense of urgency has not developed—among leaders of both major parties. Even Dan Coats, the Trump administration’s director of national intelligence, has said that “There should be no doubt that Russia perceives that its past efforts have been successful and views the 2018 midterm U.S. elections as a potential target for Russian influence operations.”

“Frankly,” Coats told the Senate Intelligence Committee earlier this year, “the United States is under attack.”

“It is abundantly clear that we need to get ahead of anyone wanting to interfere with our elections,” says Congressional Progressive Caucus co-chair Mark Pocan (D-WI). “We need better protections for our elections, including paper ballots for our voting machines.”

While other members of Congress are making grand pronouncements about election integrity, Pocan has a plan. The Wisconsin Democrat has, with Democratic Congressmen Keith Ellison of Minnesota and Hank Johnson of Georgia, introduced tech-savvy legislation that gets to the heart of the matter. Their Securing America’s Future Elections (SAFE) Act would safeguard US elections from cyber threats and interference by permanently classifying the integrity and security of elections as a component of the country’s critical infrastructure.

Arguing that the United States needs “a comprehensive approach to secure our election process from start to finish,” Pocan said when the SAFE Act was introduced last year: “By making our elections a top national security priority, we can ensure cybersecurity standards for voting systems are upgraded and require paper ballots with all electronic voting machines. One thing Democrats and Republicans should agree on is that we should be doing everything in our power to guarantee the sovereignty of our country and the integrity of our elections. This bill will do just that.”

The SAFE Act is not the final answer to concerns about election integrity and the many challenges facing American democracy. However, it is a practical point of beginning. And it is shocking that the bill has less than two dozen cosponsors—all of them progressive Democrats.

Why haven’t more House members—especially Republican leaders like Ryan, who say that Russia “continues attempts to undermine democracy”—signing on? Perhaps it is because this legislation is about more than Russian intrigues. It is, as well, a response to the threat of voter suppression. It pushes back against the wrongheaded attempt last year by key Republicans on the House Administration Committee to shut down the Election Assistance Commission, the federal agency created to help states update election systems and security. The SAFE Act reauthorizes the EAC for a period of 10 years and requires a random audit of precincts/wards in each state to ensure there are no discrepancies between paper ballots and electronic ballots.

“Few things are as critical as the integrity of our elections, which is why we must protect one of our most sacred institutions from foreign powers and domestic hackers who seek to undermine and influence our democratic process,” says Ellison. “The SAFE Act makes our elections a top national security priority, creates cybersecurity standards to protect our voting systems, and ensures accountability to voters. The American people must have full confidence that their votes are protected and counted.”

1. Permanently classify the security and integrity of our elections as essential to the United States’ national security interests and allow the Department of Homeland Security to designate election infrastructure as critical infrastructure. This includes storage facilities, polling places, vote tabulation locations, voter databases, voting machines, and other systems that manage the election process. This important classification would place election systems in the same category as other critical infrastructure including the power grid, the banking system, and other utilities.

2. Authorize the necessary funding for upgrading cybersecurity standards of voting systems, including the software used to operate such systems, and to ensure the security of the manufacturing processes for such components through collaboration with the National Institute for Standards in Technology and the Department of Homeland Security. The bill will also ensure cybersecurity for all voter registration databases.

3. Require NIST and DHS to create basic cybersecurity standards for private companies contracted to work on election systems in the U.S.

4. Require all electronic voting machines to have a corresponding paper ballot. The Election Assistance Commission would be required to randomly audit 5 percent of wards/precincts in each state to ensure that there are no discrepancies between paper ballots and electronic ballots.

5. Reauthorize the EAC for a period of 10 years. The EAC is the most well-equipped agency to deal with election technology issues, such as software patches, for voting machines from private vendors. Eliminating this crucial agency would create an easily exploitable opportunity for hackers.

6. Require the DHS to conduct a review of election systems yearly beginning in 2018.

The SAFE Act was proposed more than a year ago. Bipartisan concern about interference in our elections has only increased since then. Yet this concern is still, for the most part, expressed with inflated rhetoric rather than a guarantee of election integrity.

The time has come to act, because Pocan is right when he says, “Not acting now will only lead to repeated interference.”