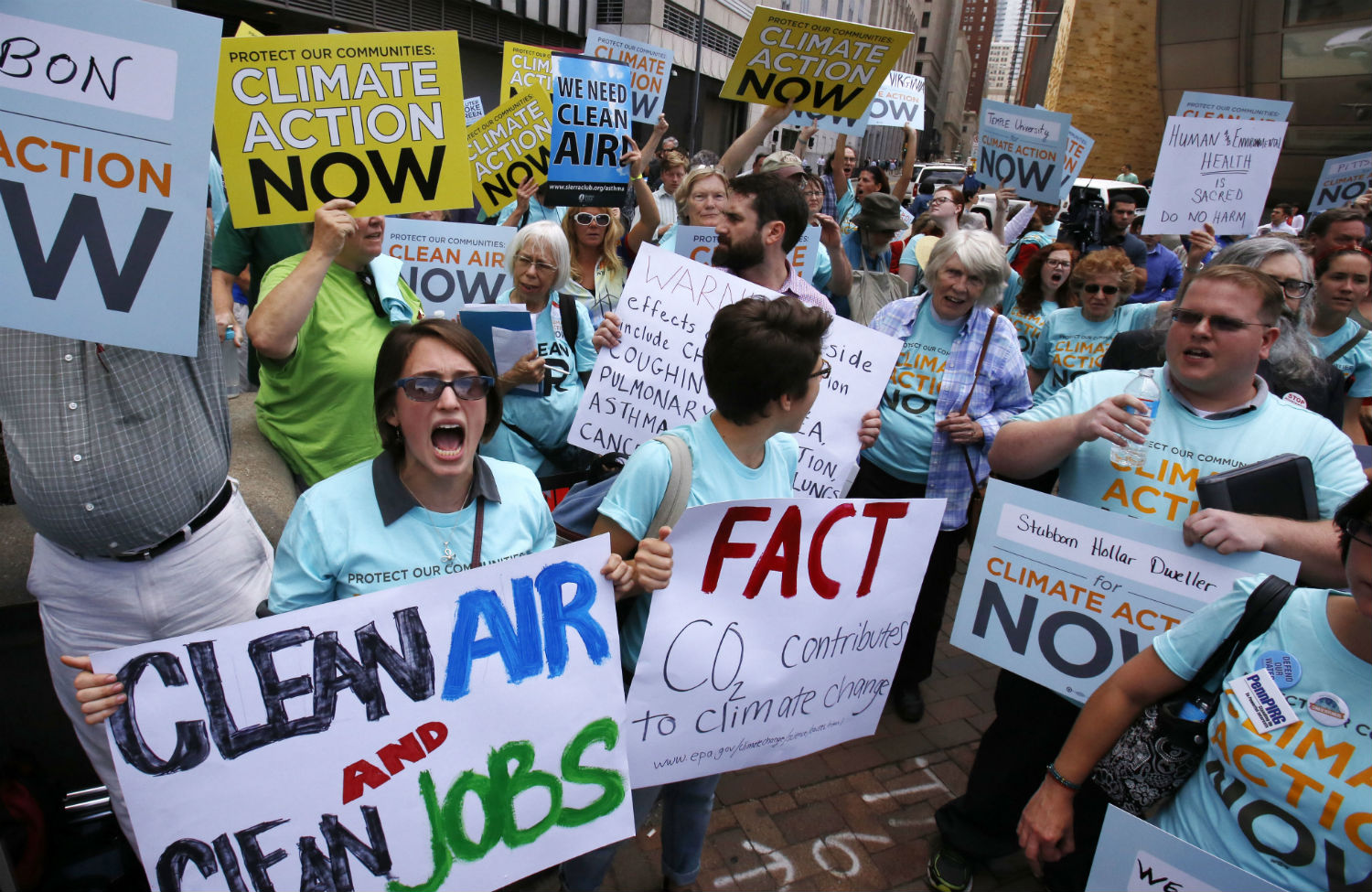 Trust the academics, God bless ’em, to confirm the obvious.

This summer the journal BioScience reported that global climate change has eclipsed biodiversity conservation as the top environmental concern among philanthropies and scientific researchers, as well as in media coverage. The shift is hardly news: A glance at the websites of the leading environmental organizations reveals that global warming is the central issue for most campaigning outfits. Over the past fifteen years, as reports about the scope of the climate crisis piled up, much of the green movement has pivoted from a focus on wildlands preservation to human self-preservation.

Environmentalists’ urgency will be on display on Sunday in New York City as crowds gather for the People’s Climate March. Organizers are hoping to recruit more than 100,000 people to rally in Manhattan on the eve of a climate summit at the United Nations, with similar demonstrations to take place worldwide. Greens hope the global day of action will highlight the recklessness of the carbon barons and their political sock puppets, and jolt global leaders into action to stem greenhouse gas emissions.

By coincidence, the People’s Climate March will come just two weeks after the fiftieth anniversary of the signing of the Wilderness Act. That law is one of the signature accomplishments of the American environmental movement. It marked a sweeping extension of the national park philosophy by establishing a legal definition of wild places as areas “where the earth and its community of life are untrammeled by man.” The anniversary should be an occasion for celebration, yet conservationists find themselves in something of a defensive stance. The wilderness ideal is experiencing a “midlife crisis,” The New York Times declared this summer. Drawing two-dimensional lines on a map appears insufficient for the multi-dimensional threats of an overheated and overcrowded planet. Federal land managers are struggling with whether to manipulate wilderness areas to save certain plants and animals, while advanced technologies erode the wild’s remoteness and isolation. The once-solid certainties about the value of wild nature are melting under the glare of a hot, new sky.

Environmentalists are having to figure out where (or whether) wilderness fits into civilization’s twenty-first-century survival kit, a question that is forcing a split among the green community. Some argue that we have no choice but to abandon the old faith, while others say that we have to maintain a commitment to wildlands and wildlife.

For more than 150 years—since Thoreau gnomically declared that “in Wildness is the preservation of the World”—an appreciation of the untamed has been a cornerstone of environmentalism. To those determined to preserve the last remnants of the original Earth, wildness has been the heartbeat of a worldview. Things have changed. Today, the garden—a place where wildness is directed for our ends—is the most potent ecological metaphor. Homecrafts are hipper than woodcraft, and baking has replaced backpacking among eco trendsetters. The shift in the zeitgeist comes with the proclamation of a new geologic epoch—the “Anthropocene,” or the Age of Man. According to a former writer for Nature, Emma Marris, “We are already running the whole Earth, whether we admit it or not.… We must temper our romantic notion of untrammeled wilderness and find room next to it for the more nuanced notion of a global, half-wild rambunctious garden, tended by us.”

A few environmentalists have gone so far as to say that wilderness may no longer exist. “The unmistakable domestication of our planet,” a group of conservation biologists have declared, means that “conservationists will have to jettison their idealized notions of nature, parks, and wilderness” and embrace the idea that “nature could be a garden…a tangle of species and wildness amidst lands used for food production, mineral extraction, and urban life.”

Wilderness has always been contested terrain, and the polemic would seem yet more industrial apologia were it not for this fact: The essay’s lead author, Peter Kareiva, is the chief scientist of The Nature Conservancy—the same Nature Conservancy that describes itself as “the leading conservation organization working around the world,” that claims more than 1 million members, that has as its homepage the enviable URL www.nature.org.

Kareiva and Marris are part of an influential faction sometimes called “eco-pragmatists” or “eco-modernists.” They argue that we should ditch the hope of preserving biodiversity for its own sake and instead focus on what are called “ecosystem services.” The idea goes like this: Nature provides to humans essential tasks (wetlands blunt storm surges, forests suck up carbon, marshes filter water), and by putting a dollar value on those services we can create financial incentives for protecting the environment. At the same time, we need to recognize that humans have always altered the environment, so we should admit our role as planetary gardeners. The new-fashioned agenda is driven, in part, by a recognition of human civilization’s awesome power. “We’ve forever altered the Earth, and so now we cannot abandon it to a random fate,” Marris has written. “It is our duty to manage it.” There’s also a sense of desperation. At this eleventh hour, with so many ecosystems on the verge of dangerous tipping points, there’s no time for idealism.

Not so fast, say some other environmentalists. The millions of other life forms with whom we share this planet enjoy intrinsic rights to freedom and autonomy, and it’s not our role—much less our “duty”—to stamp our desires onto every landscape. Michael Soulé, one of the godfathers of the science of conservation biology, offers a sharp rebuttal: “Conservationists and citizens alike…ought to be incensed by a preposterous scheme that replaces wild places and national parks with pretty gardens animated by well-behaved, convenient animals. Those who promote a Disney World should just move there.”

Today’s internecine tensions are an echo of a long-running battle among environmentalists. A century ago, Sierra Club founder John Muir was in a pitched fight with the first head of the US Forest Service, the conservationist Gifford Pinchot, over whether to dam Yosemite National Park’s Hetch Hetchy Valley. Pinchot wanted the valley dammed, arguing that nature existed to be used (wisely and conscientiously) by humans. Muir and his allies said that a place like Hetch Hetchy had a right to exist for its own sake. The terms of the debate are much the same now—only the stakes are much higher. In a world of uncontested human authority, should we garden every landscape? Or is it important to leave some places free from our intentions, even if we know they might still be marked by our accidents?

For me, the answer became clearer during a mid-summer expedition to the Arctic National Wildlife Refuge, a bold-faced name among the wilderness that remains on Earth. One of my companions was a woman named Rue Mapp, founder of a group with the mission-explicit name Outdoor Afro. On day four, after paddling the Aichilik River, we took a tundra stroll to process some of the wonders we had seen—caribou by the thousands, a grizzly up in our grill, the sun at midnight.

The light had taken on the pearl cast of the Arctic’s everlasting evening. Countless wildflowers—anemone, avens, the tiny white stars of alp lilies—swirled like constellations, a nice consolation for not having any star-show. Mapp talked about the tidy coincidence of the fact that both the Civil Rights Act and the Wilderness Act had been passed in 1964, and how to bring the promise of those laws together today. She talked about how the biblical prophets had gone into the wild seeking clarity. Then she offered this: “The wilderness makes us less obsessed with ourselves, and in that we see interconnections, how our fate is intertwined with everything around us. And that’s solidarity—recognizing the relationships we normally overlook amid the noise of our lives.”

I think Rue Mapp is right. We need the bracing tonic of wilderness to remind us of our obligations to the billions of other critters we share the planet with. It’s time to double-down on wildness as a touchstone for our relationship with the rest of life on Earth.

For starters, wilderness can serve as a harbor for all those plants and animals that we have driven from their homes. Wilderness areas and other parks and preserves—ideally connected by corridors of wildlands—are vital refugia for plants and animals trying to survive the inevitable dislocations of climate change.

The wild can also be an anchor, a counterweight to the force of industrial society. The garden has become such a powerful metaphor because it represents balance—a way of thinking about how to reconcile human appetites with the needs of nonhuman nature. The garden is the middle way, the place where we make our home. But to strike that balance requires something that can counteract the massiveness of global consumer capitalism. Wilderness carries such weight. The wild represents the now-radical idea that life on Earth is not here just to suit our needs.

Finally, wilderness can act like something of a needle on our moral compass. In her new book on the climate crisis, This Changes Everything, Naomi Klein has a chapter titled “Love Will Save This Place.” That’s exactly right. A commitment to wildness can keep environmentalism fired by a passion for what we love rather than an act of desperation for our species’ survival. We need to sustain a passion for wilderness on the off chance that people want to be called to something higher than saving our own bacon from a crisis we ourselves manufactured.

A love of place has always fueled the movement to preserve wild nature. I bet you’ve felt some of that yourself, perhaps as recently as this past summer. Maybe it came in a magic moment on a high peak in the Rockies, or in the quick dawn of the desert. Maybe you felt it in the deep stillness of an old-growth forest. Maybe it was as simple as the late-day sunlight on one of those small, secret ponds that dot Maine, Michigan or the timberlands of Minnesota, where wolves still roam. Wherever it was, you might have recognized that a garden-Earth would make the planet smaller, with less beauty and far less mystery—and that we need mystery in our lives as much as we need our daily bread.

If that sounds romantic—well, it is. Just the kind of romanticism we’ll need to remember that on Sunday we’ll be marching for a world worth saving.