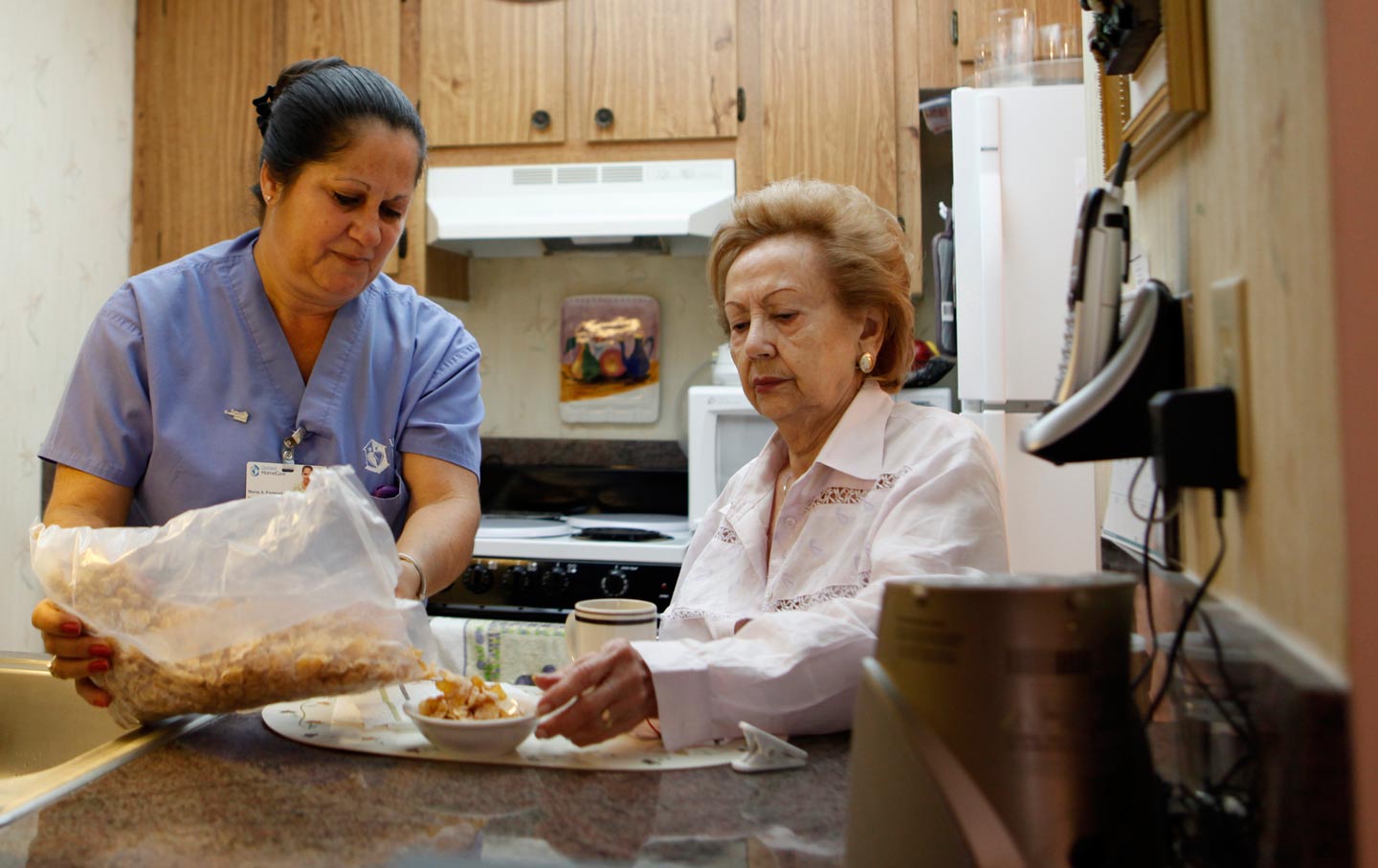 In the debate over modernizing the health-care system, the realm of home-based health-care services seems mired in the last century. Long dismissed as unskilled “senior sitters,” home care aides have only recently been officially included under minimum wage and overtime protections. Yet even as they’re just catching up to last century’s labor laws, home care is quickly adapting to 21st-century medical standards—creating the double challenge of shaping dignified careers out of a traditionally thankless job.

Since home-based health-care services is one of the fastest growing sectors, home care jobs are being redefined largely by market trends. But a program developed through the SEIU home care union in Washington sees the sector’s expansion as a platform to systematically transform one of the lowest-paid jobs into a career of the future.

The SEIU Healthcare Northwest Training Partnership’s apprenticeship program, an initiative administered through a nonprofit founded by the union in partnership with employers and the state, takes a two-pronged approach: first, equipping aides to “keep people healthy and out of emergency rooms and hospital beds” by delivering preventive senior and disability care; second, to help union members “reap a fair share of the financial benefits that accrue to the system,” primarily by avoiding more expensive emergency and hospital care. The broader goal is boosting job quality for the workforce, comprised of mostly working-poor women, by reducing extremely high turnover rates (currently exceeding 60 percent annually) and building equitable career pathways for future workers.

The apprenticeship program, which just graduated its third class, with plans to expand to 3,000 trainees eventually, focuses on core medical skills along with social aspects of the job, like dealing with trauma and mental-health issues, as well as self-care to help workers manage the extreme stresses of the work.

Clara Aiken, a recent apprenticeship graduate, says the program has helped her develop a way to “speak” with a client who has been nonverbal since suffering a stroke. To understand her needs, she says, “it was very important for me to watch her body language, her hand signals, as well as her facial expressions…. For instance, when I come in, I always talk to her, although she cannot talk to me…. It made her feel like although she couldn’t speak, she was able to communicate with me with body language, and let me know some of the things that she wanted.” The scene contrasts sharply with her previous experience working as a nursing assistant in a group home, where she had to manage more than 20 patients simultaneously—a high-stress, frustrating environment for both residents and staff. “I just always felt like I didn’t have enough time that I should have with each person,” she recalls.

With her current client, she says, “as a home care provider…I was able to just focus totally on her, and it was personal.” Aiken in turn is supported by her union contract, which guarantees a stable career and opportunities to keep learning on the job.

Another critical component of the changing home care landscape is technology. The union works with the tech firms serving hospitals and physicians to connect home care aides directly to providers’ expanding health monitoring systems. Charissa Raynor, executive director of the Training Partnership, says that while home care aides have critical insight into a patient’s condition, from weight changes to medication routines, currently, a typical home-based aide “doesn’t have a structural, systematic way to report that information to the [primary] care team. And if she wants to call up the care team…she would probably be dismissed.”

If channeling real-time advice via mobile technology to a frontline doctor spares a senior an expensive ER visit, overall costs are reduced. Eventually, Raynor hopes, “some savings can be reallocated back into their wages.”

But there’s still the perennial labor-management bottleneck besetting many workforce-development programs; they might train people well, but that doesn’t always lead to better long-term job prospects.

Yet as the sector expands rapidly—with overall job growth for home-based aides reaching about 50 percent from 2012 to 2022—SEIU’s program centers on the idea that union labor is uniquely positioned for a leading role in shaping that growth. Still, the wage boost that apprenticeship graduates experience has been relatively modest so far—a raise of only about 50 cents an hour; more is needed to stave off turnover.

Raynor noted that the program is being revised to focus more on improving compensation, which could require “structural change” in state or federal labor policy. Improving workforce conditions might also hinge on labor’s ability to demand employers simply pay more. Cultivating that ability requires yet another kind of connection—solidarity between workers.

Fortunately, union-based workforce development can foster these links. While home care aides typically work alone, Aiken recalls, in her apprenticeship she could exchange stories, experiences, and guidance with fellow union members: “We were able to connect with each other.… we really learned a lot from our course as well as from each other, which bonded us together.”

Could bonds between workers translate into union power? As the industry moves toward more cost-efficient, community-based care, jobs are increasingly oriented toward social support and human relationships, which are ultimately mediated through frontline workers. Labor can raise a voice in shaping how care is delivered, prioritizing worker empowerment and social equity, rather than the industry’s bottom line.

Even without support from a union-affiliated training organization, workers are creating different workforce-development models with a community-driven ethos. Cooperative Home Care Associates, a worker-run co-op based in the Bronx, runs a career-development system that provides comprehensive training across the workers’ career and guarantees a stable work week with steady pay. While the organization aims to “give workers opportunities to learn and grow as members of a health care team,” clients receive support from caregivers who are economically secure, and so will likely stick around much longer than someone earning minimum wage.

A responsive health system is about more than cutting-edge medicine: It requires a workforce that cares about the people they serve, their profession, and fellow workers. Developing that community of support involves building workers’ craft holistically, and giving them a lead role in shaping the future of the profession. When their care is empowering, everyone rediscovers why their work matters.