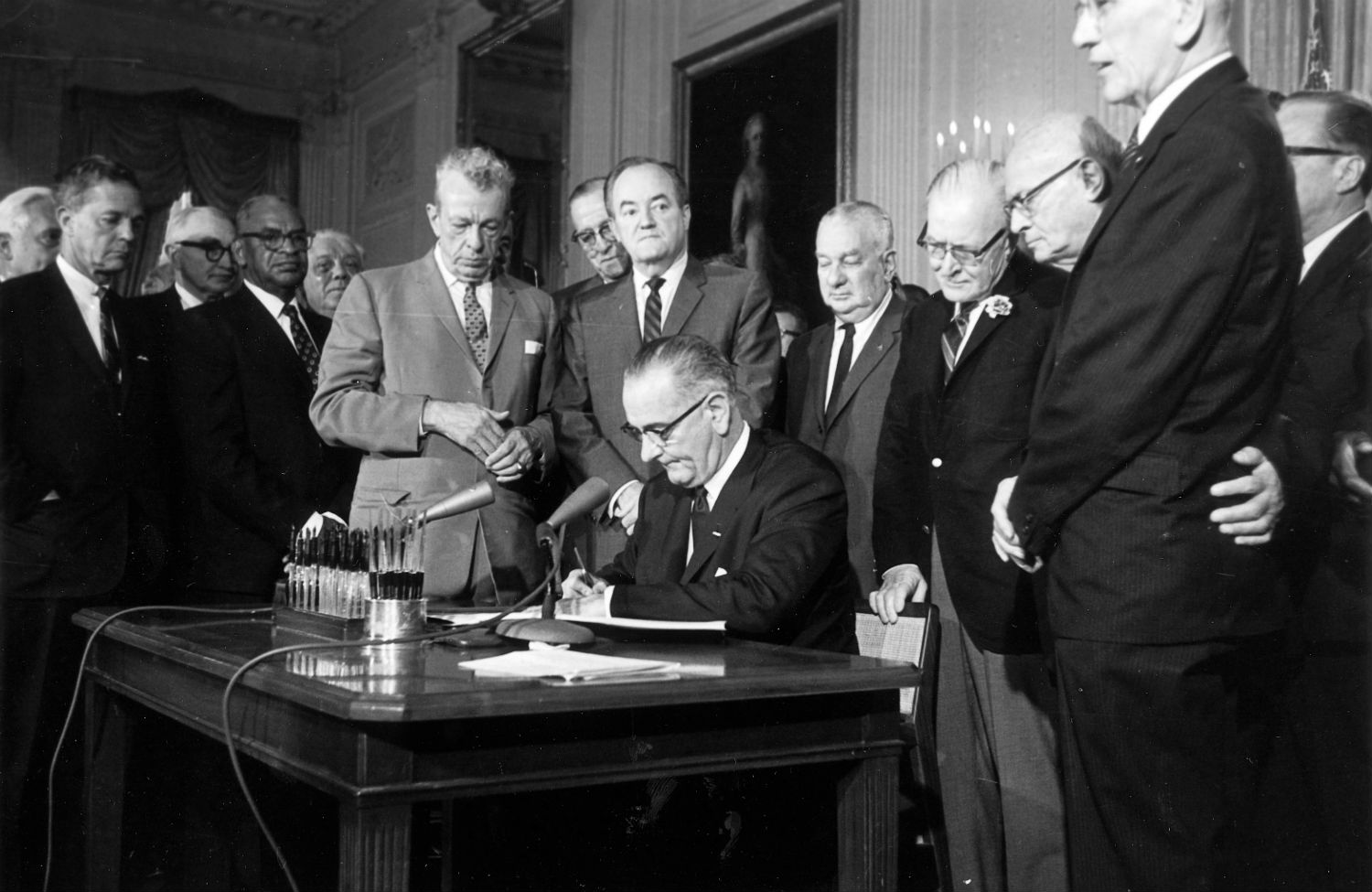 Last week, Lyndon Johnson’s clan drew four presidents to the Johnson Library for a three-day fête on the fiftieth anniversary of the Civil Rights Act—what Martin Luther King Jr. is said to have called the “second Emancipation Proclamation.” The Johnsons are often concerned about control at the expense of others’ independence, as was also usually the way of their patriarch. For this anniversary, the plan “to protect the legacy,” a term used during an insiders’ session, was to control the agenda by explicitly putting aside Vietnam—which was mentioned only rarely, a passing rhetorical trip-up, a furrowing of a forehead.

But that is quite a lot to rule out of order: the presence of 550,000 American troops at the high point of the war; more bombs dropped on North Vietnam than were dropped on Japan in World War II; Agent Orange; the Tet offensive; the My Lai massacre; millions of North and South Vietnamese dead; more than 58,000 Americans dead; uncountable wounded throughout the peninsula; the movement at home against the war, with about half a million draft evaders, 200,000 of whom were charged with draft evasion and 8,000 of whom were convicted; Johnson’s decision not to run for re-election.

The Johnson Foundation has nevertheless aimed the historical limelight—now and for the next five years, as foundation chair Larry Temple announced—on LBJ’s many triumphs in passing laws to reform American society. On that basis, Johnson was the greatest president since Roosevelt and the most effective presidential enemy of racism since Lincoln. As Jesse Jackson, who with originality framed those reforms as the “King-Johnson movement,” said during the event, “Lyndon Johnson is a legend who deserves to live on.”

Three surviving leaders of the black uprising of the ’60s—Congressman John Lewis, a hero of the movement who stands in its history alongside Reverend King; Julian Bond, the SNCC press officer and former NAACP chairman; and Andrew Young, an activist in Atlanta and Carter’s UN ambassador—participated in a moderated dialogue that was the vibrant center of the civil rights summit. Bond asked Lewis about the historic “Bloody Sunday” in Selma, when he was one of those leading a column of 600 people across the Pettus Bridge where Bull Connor’s police were lined up on the other side, waiting with clubs to beat them to the ground. Bond asked, “Why didn’t you turn around?”

Lewis answered, “You come to that position in your life where you have an executive session with yourself, and you’re saying to yourself I’m not afraid. I am not afraid. We were prepared to die. Some of us signed notes and wills. I thought I was going to die on that bridge. But I’m not afraid. You have to continue to move on.”

The presidential guest on the first day was 89-year-old Jimmy Carter, answering questions put to him by Mark Updegrove, the director of the library. Carter, having jetted around the world for decades working for peace and democracy, calmly related what he has learned about the mass murdering of girls, the grossly underreported and unpunished rapes, genital mutilation and the enslaving and underpaying of women. He was, in effect, arguing for a new civil rights movement for women everywhere, including the United States, which, he said, should set an example for the world.

Forty million were killed in World War II, Carter said, but “four times as many girls have been killed by their parents. They strangle their little girls at birth,” in China, in India. With sonograms now available, fetuses are being aborted because they are females. China, Carter said, has 118 young men for every 100 young women, India 112 for every 100. He heard a woman in India admit “without any shame that she strangled eight girls because they wanted boys.” In Egypt “the sexual organs of 90 percent of girls are mutilated,” and in three to five other African countries this is done to more than half of all girls. In the United States, Carter said, rape in universities and the military is chronically underreported.

“Slavery at this moment,” he said, “is greater than it ever was in the nineteenth century…It’s the worst human rights violation on earth.”

On the second day, Bill Clinton read hesitantly from a script for a while, his reading glasses halfway down his nose. Then he clicked into his mesmerizing speaking power, skewering Republicans for systematically plotting out voter suppression laws in many states intended to reduce the number of minorities and the poor who vote.

“All of a sudden there are all these new barriers to voting,” Clinton said. “We all know what this is: this is a way of restricting the franchise after fifty years of expanding it…. Is this what America has become?…. Is this what Martin Luther King [fought for], Lyndon Johnson used his legendary skills for, to restrict the franchise?”

Within the constraining agenda, George W. Bush was protected from discussion or question about his wars of aggression in Afghanistan and Iraq. He spoke gaily to a select group in the LBJ Library’s tenth-floor atrium. By first having Updegrove read aloud two letters from Bush senior, Bush the younger convincingly showed that his father was a hidden liberal on Johnson’s fair housing law of 1968 (having voted to kill it on a procedural maneuver, he later voted for it on final passage). The second Bush then went on as if he has long been a hidden liberal himself, declaring:

We know with complete certainty that America is a more just and generous country because LBJ set his mind and will to the cause of civil rights….He [turned] a great nation’s grief toward a great national purpose….He affirmed the essential role of the federal government when other levels of government fail in their primary duties….He made us one people.

Education in America, no longer legally segregated, still “is not effectively equal,” Bush said, and a federal role is needed to help educate poor, minority and special-education children. He defended his much berated “No Child Left Behind” law as the next civil rights crusade waiting to be won. His startling argument for this was that “according to the most recent testing,” the average reading score for a minority student of 17 years of age is about the same of that of a white student of 13.

President Obama acknowledged that Johnson’s civil rights and voter-rights laws enabled him to become president. “The laws LBJ passed are now as fundamental to our conception of ourselves and our democracy as the Constitution and the Bill of Rights; they are foundational, an essential piece of the American character,” Obama said in the Johnson Library. Four days after President Kennedy’s murder, Obama said, Johnson told his aides he was going to fight for civil rights in honor of JFK but was advised not to do it. One aide said that the new president should not risk his entire agenda for that cause, even though it was right. “To which it is said,” Obama stated fifty-one years later, “Johnson replied, ‘Well, what the hell’s the presidency for?’….What the hell’s the presidency for if not to fight for causes you believe in?”

“I picture him standing there,” Obama said, “taking up the entire door frame, looking out over the South Lawn in a quiet moment,” asking himself “what was the end point of his ambitions.” As “the most powerful white politician from the South…he was the only guy who could do it.”

Wistfully, it seemed to me, the man who lives in the White House now said change in the United States can be slow, partial, frustrating, stymied. History travels not only forward, also backward, sideways. On being president, he said, “The offices humbles you…. you are but a relay swimmer in the current of history.”

That’s why we remember Johnson’s greatness, Obama said, because he showed that with “perseverance and courage, people who love their country can change it.” Repeating Johnson’s own repeating of “We shall overcome,” Obama said, “We shall, we…can build an America that is more fair, more free and more equal.”

Andrew Young proposed several times during the three days that the government should print Social Security cards with the holders’ photographs on them, in part as a means of providing poor Americans with photo IDs. This can be done, he said, for about 9 cents a card. Jesse Jackson said the right to vote should be a federal matter and requirement. There were other panels on social justice, immigration, same-sex marriage, songs and music in the civil rights movement and the integration of sports, as well as live performances.

The celebration of the passage of landmark civil rights legislation and Johnson’s role in it is appropriate as the struggle continues and important ground has been lost. But as the Johnsonians of course know, the Johnson legacy cannot be cleaned up by de-emphasizing Vietnam. Questioned on this, the president of the foundation, Elizabeth Christian—the daughter of Johnson’s former press secretary George Christian—said, “We do intend to tackle the issue of Vietnam, but probably not until 2017 or ’18. The war has been so assiduously analyzed, and our museum has such an extensive exhibit on it, that we wanted to first concentrate on some of the issues that have slid from American consciousness.” It seems to me that the foundation and the library would be well advised to consider adding to their five-year Great Society celebrations, for the general public and for students in the nearby Johnson School of Public Service, fiftieth anniversary events matched to the stations of that war.