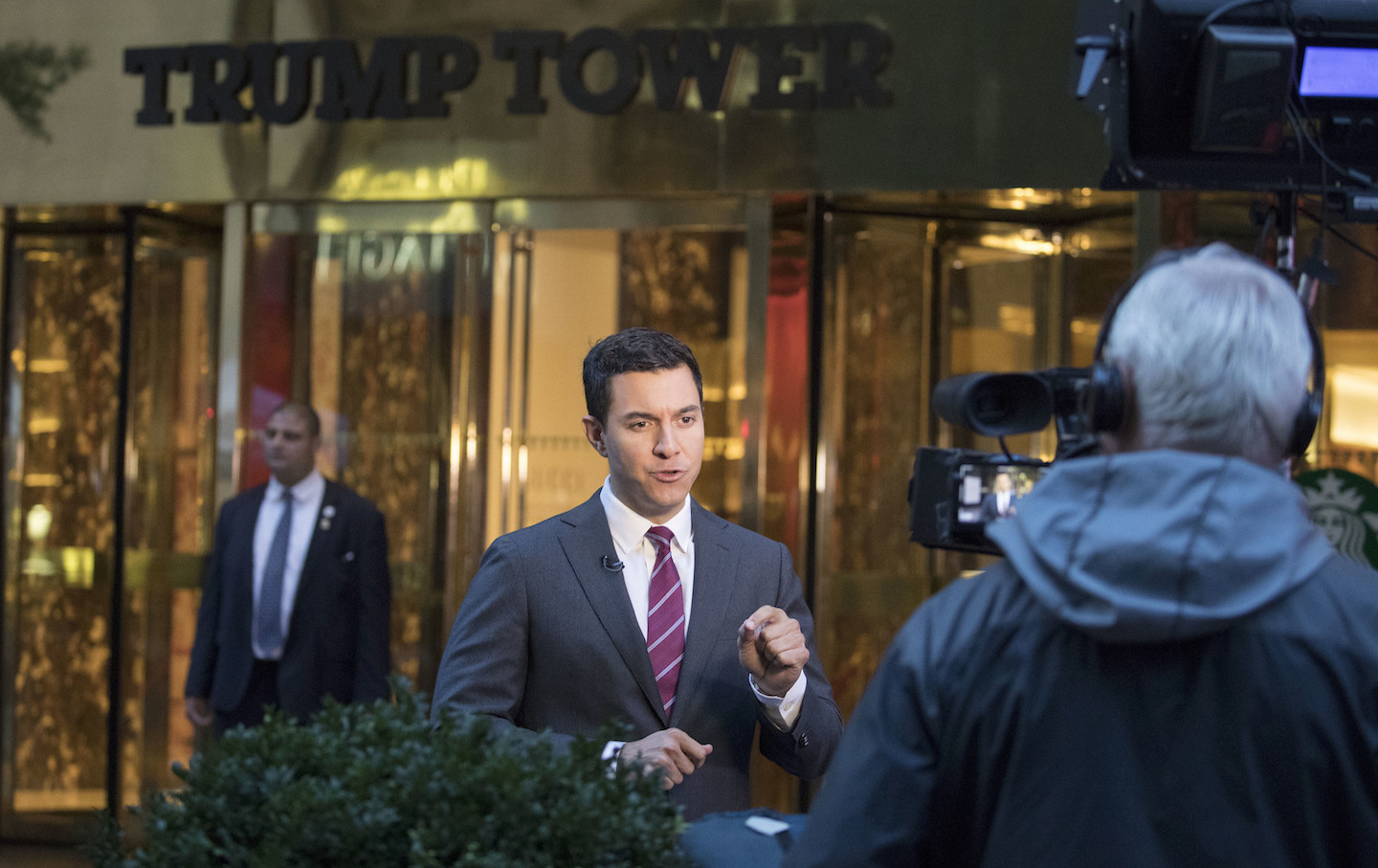 How exquisitely fitting that Donald Trump is going down because of a tape shot by a celebrity-TV show. And make no mistake, Trump is going down. What remains to be seen is how fiery his crash and burn will be, how lopsided his defeat will be—landslide, anyone?—and how much of the rest of the Republican slate he takes with him. If the fallout is far-reaching enough, and everyone who opposes Trump gets out and votes, Democrats might regain a majority in the US Senate and even the House of Representatives, dramatically recasting the political terrain facing a President Hillary Clinton.

When even Fox News is talking about the crisis nonstop, and Fox’s favorite pollster, Frank Luntz, is openly saying that 44 percent of his respondents want Trump to drop out, and Luntz himself then all but begs the Republican National Committee to replace Trump with vice-presidential nominee Mike Pence, you know that this ship is sinking fast. Trump’s only hope, Luntz added, is an absolutely dominating defeat of Clinton in the town hall–style debate Sunday night, an outcome the pollster clearly did not expect.

Trump’s path to an Electoral College victory was always uphill, but now the crest of that hill is curling backward onto the real-estate blowhard, crushing him and threatening all but the safest Republican incumbents as well. Credit this turn of events to the most powerful, if sickening, October Surprise in presidential history. Savor the moment, notwithstanding the criminal nature of Trump’s boasts about physically forcing himself on women and the frat boy vulgarity of the five words that are sealing his doom: his giddy declaration that the best way to approach a desirable female is to “grab them by the pussy!”

Yes, Trump has said lots of disgusting, stupid, or hateful things before and gotten away with it. Yes, polls still show him even or within striking distance of Hillary Clinton in many states (though those polls, unlike Luntz’s, did not measure public opinion after the news broke). But this scandal is not going to go away. This time really is different, for two reasons—one demographic, one rooted in the nature of celebrity television.

First, this time Trump is not insulting Mexicans or Muslims or the disabled or immigrants—groups that much of Middle America still sees as “other”—he is insulting women in general. Women are, of course, half the population, and they are anything but “other.” Everyone has a mother, and many if not most of us, men and women alike, also have a daughter, sister, wife, or girlfriend. This tape and its ghastly boasting about engaging in what amounts to criminal sexual assault hits home with Middle Americans in a way Trump’s previous insults of “others” did not. There is not a woman I can think of, not even my two dear sisters who always vote Republican, who could watch this tape, hear Trump brag about his freedom to “grab them by the pussy,” and not feel revolted or worse.

That’s why even Republican leaders who shamefully excused or stayed silent about previous Trump outrages are speaking up against this one. US Senate majority leader Mitch McConnell, who declined repeated invitations to repudiate Trump’s slanders of Mexicans, Muslims, and immigrants, nevertheless declared that this latest revelation was beyond the pale. “As the father of three daughters, I strongly believe that Trump needs to apologize directly to women and girls everywhere, and take full responsibility for the utter lack of respect for women shown in his comments on that tape,” McConnell said.

This doesn’t mean that no women will vote for Trump, but their numbers will be pretty limited. Trump’s base has always consisted of older, white men, but about one-quarter of his supporters have been women. Many of those women may well still vote for him, if only on the grounds that the Devil incarnate, a.k.a. Hillary Clinton, must be stopped by any means necessary. But outside of Trump’s base, among women who identify as independents or mainstream Republicans? Not many will pull the lever for Trump, not anymore. Trump was already running far behind with women voters; it’s a demographic where he desperately needed to improve, and that now looks impossible.

The second reason this time is different than previous Trump scandals highlights the delicious irony at the heart of his unraveling: This time, Trump’s offensive behavior was captured on live television, in a kind of mini-movie whose contents and implications are crystal clear. Like it or not, there is no more powerful force in politics than television: US elections are decided largely on the basis of what is and is not seen on our ubiquitous screens, both large and small. This truism often gives rise to unfortunate results, but not so in this case. For when it comes to television, nothing attracts audiences more than sex and gossip.

Which is why this video is going to be watched over and over and discussed all but nonstop for the rest of this campaign. Trump and GOP talking heads will try to pivot to Hillary Clinton’s pro-trade comments in the Wall Street speeches Wikileaks released the same day The Washington Post released the video. But that’s a losing battle, and a lucky break for Clinton. What’s more likely to get the average person’s attention: eavesdropping on Donald Trump’s advice on how to kiss and grope beautiful women whether they like it or not, or parsing Hillary Clinton’s wonky remarks about international trade and tariffs?

Some observers on both the left and the right have asked, in effect, what’s the big deal? We already knew Trump was a crude sexist, this tape just confirms it. Well, yes and no. Trump’s uncontained sexism is indeed well-known among the kinds of people who read articles like this one: political insiders, news junkies, and regular citizens who make an effort to stay informed about current events. But the harsh truth is that these folks are not most of the electorate.

Most Americans are what pollsters and political scientists politely label “low-information voters.” Low-information voters do not follow current affairs closely, do not read a daily newspaper (even online), do not seek out in-depth coverage of elections and candidates, much less alternative perspectives. Their opinions and voting patterns, if they vote at all, tend to reflect what they see and hear on television (and, increasingly, on social media, though in this context television and social media overlap substantially, since much of what appears on Facebook or Twitter originates on television).

Before now, low-information voters may have been vaguely aware of questions about Trump’s views and treatment of women. But it’s one thing to have “heard about” a controversy; it’s quite another to watch a tape that reveals Trump’s grotesqueries in all their sordid vividness. Seeing is believing, and countless people are going to be seeing that tape over the next four weeks.

Of course, none of this gives cause for complacency within Clinton ranks. Democrats still need a big turnout on November 8 (and sooner, for that matter—early voting has already begun in some states). People still need to get out and vote. And Hillary Clinton must avoid any last-minute, self-inflicted disasters, starting with Sunday night’s debate. But if those “i”s and “t”s are dotted and crossed, this election should not be close. Having lived by the sword of celebrity television, Donald Trump is now on the verge of dying by it.