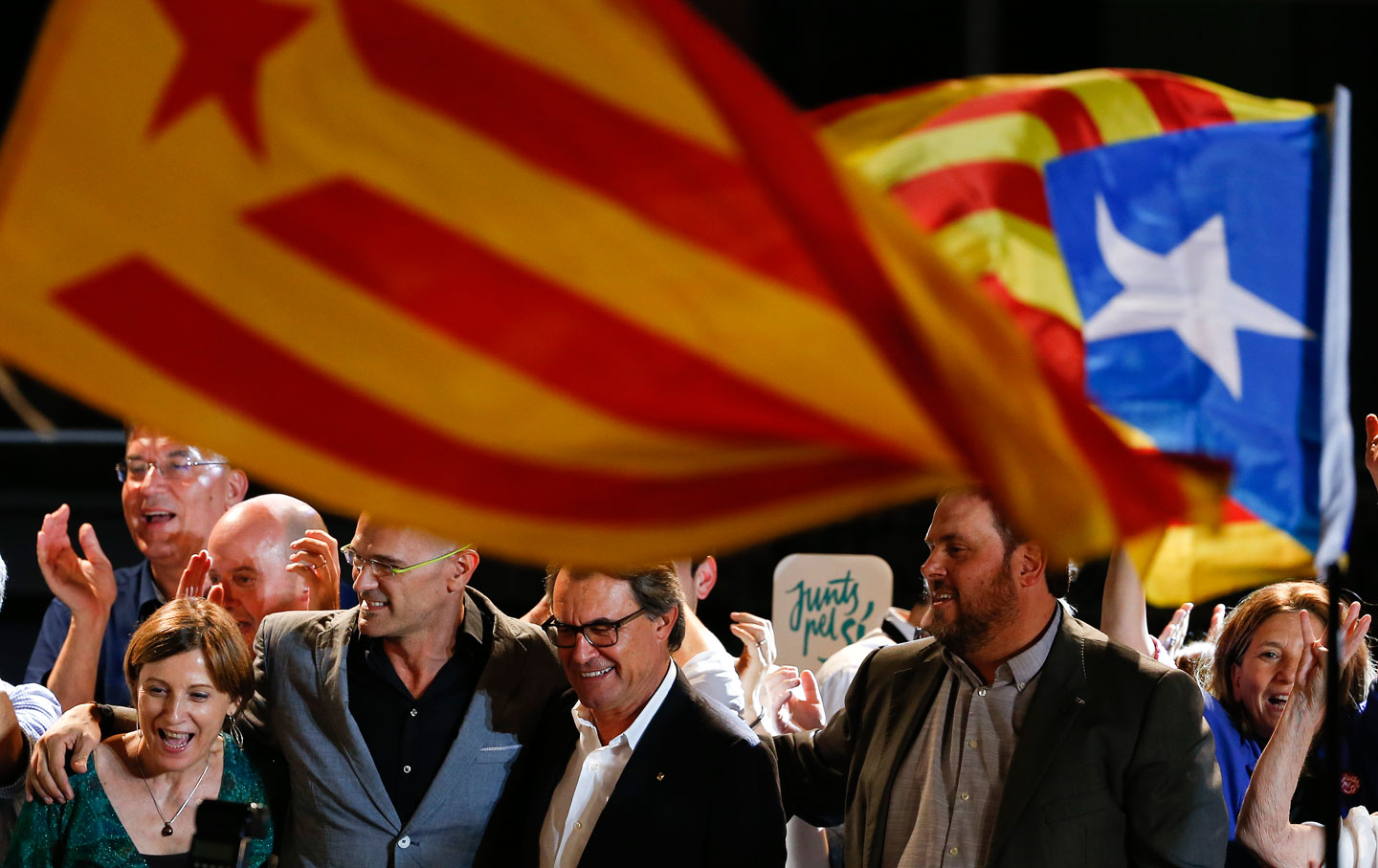 Barcelona— The anti-capitalist, pro-independence Popular Unity Candidacy (CUP) faced an excruciating dilemma after the September 27 regional elections in Catalonia: join a government that would begin the next stage of the long march toward the creation of a Catalan independent republic, or stand true to its commitment to fight austerity, privatization, and tax evasion by the Catalan elite.

The victorious pro-independence coalition Junts pel Sí (“Together for Yes”), which won 62 of the 135 seats in the Catalan Parliament, needs CUP’s 10 seats to form a government and begin building the architecture for a new state of some 7 million inhabitants lodged between Spain and France. Catalan president Artur Mas, leader of the center-right Convergència i Unió party, and Oriol Junqueras of the Catalan Republican Left, which made up the pro-independence ticket, consider their resounding victory in seats on Sunday enough to justify the move toward secession despite falling short in popular votes of the majority considered a minimum condition for a declaration of independence—which the central government in Madrid has repeatedly declared would be unconstitutional. A T-shirt-clad group of revolutionaries, many of them former supporters of the armed separatist movement Terra Lliure (“Free Land”), CUP has proved more cautious than the conservative, MBA-trained Mas. “We lost the plebiscite, so we can’t declare independence,” said CUP leader Antonio Baños.

CUP has also refused to back the return of Artur Mas—whose government has been responsible for draconian cuts in public services during Spain’s deep recession—to the Catalan presidency. To win CUP’s votes, the leader of a new government must be “free from any involvement in austerity policies or corruption charges and must also have international projection,” said Baños. Junqueras meets those requirements, as does the left-leaning leader of the Junts pel Sí campaign, Raül Romeva. But Convergència stood firm behind Mas. As the impasse hardened, CUP suggested a “choral presidency,” with representatives from all the contrasting ideological currents in the Catalan separatist movement. Some in Barcelona retorted that this proposal could only have been made in the same satirical vein as the CUP’s amusing campaign TV spot, set in the Monegros Desert between Catalonia and Aragón, and based on the US narco TV series Breaking Bad.

The neoliberal, anti-separatist party Ciutadans is now on the rise, while the leftist Podemos party may have stalled.

Left-right splits also stymied any attempts by the non-secessionist camp to fill the post-electoral void. Here the shiny young faces of Ciutadans (“Citizens”) took the initiative. A Catalonia-based neoliberal alternative to the current ruling party in Madrid, the right-wing Partido Popular, Ciutadans has out-maneuvered the PP in Catalonia and may soon do so in Spain. Its young leader, Albert Rivera, who is Catalan but more inspired by Davos, gathering site of the global capitalist elite, than the sacred Catalan mountain of Montserrat, called for a pro-Spanish government in Barcelona that would take power from the secessionists. Ciutadans won 18 percent of the vote in Catalonia, ahead of all the other anti-separatist groups.

But no one else felt comfortable with that route. In fact, the Catalan Socialist party and the Podemos–led coalition Catalunya Sí que es Pot (“Yes We Can”) seemed uncomfortable at being boxed alongside the two right-wing parties in the Spanish unionist camp. Both, after all, are staunch defenders of the “right to decide” in a referendum on independence, and while the majority of their supporters oppose independence, some might vote Yes in a referendum on secession.

Podemos’s strategy of respecting the right to decide while indicating it would support a No vote has left it open to accusations that it is hedging its bets on such a polarizing issue as independence. Catalunya Sí que es Pot won only 9 percent of the vote, compared with 12.7 percent for the Socialists and 18 percent for Ciutadans. Podemos leader Pablo Iglesias’s appeal to Catalans to help kick out Spanish Prime Minister Mariano Rajoy of the PP, and so eliminate the need for independence, seemed naïve and simplistic, given the complex questions of identity raised by Catalan separatism. Peripheral nationalist identities—particularly languages in Catalonia, the Basque Country, and Galicia—were ruthlessly persecuted throughout most of Franco’s dictatorship, leaving scars that 40 years of democracy have not erased. That painful legacy is still felt deeply to this day.

Mas’s departure looked likely until Spain’s Constitutional Court parachuted through the fog of the election aftermath and landed with a bang. Two days after winning the election, the Catalan president was ordered to appear before the judges in Madrid to defend his decision to hold an illegal and nonbinding referendum on independence in November 2014. As soon as this apparently political decision to summon Mas to the Constitutional Court hit the news, a wave of sympathy for the president surged through the pro-independence parties, and the CUP MPs were urged to support his re-election. Few in Barcelona expected the issue to be resolved before the end of October.

There is no clear escape from the Catalan impasse, which has dominated Spanish politics for more than three years. The PP-led Spanish government, under the sphinx-like Rajoy, has made no attempt to build bridges with Barcelona, probably because the standoff is a useful way to stir up passions in the viscerally anti-Catalan PP base. Rajoy has denied Catalonia the right to a referendum, even thought on the basis of last month’s elections the likely result would be a No vote that would stop the independence campaign in its tracks. Meanwhile, Artur Mas knows from years of experience that the pursuit of independence is often a better vote winner than its achievement.

All is on hold now, until the general elections in Spain in December. But the Catalan results may be a foretaste of what is to come. In first place, Ciutadans (Ciudadanos in the Spanish version) is now a serious challenge to the powerful PP, which has run Spain since 2011. The new center-right party will gain support from vast swaths of the Spanish population who are furious at Mas and Junqueras for demanding independence, just as it did in last Sunday’s polling from the industrial and Spanish-speaking towns in what used to be called the cinturón rojo (red belt) around Barcelona.

Meanwhile, Podemos may have hit a ceiling after its meteoric rise last year. The relative failure of the new left phenomenon in Catalonia is an ominous result. The Socialists, meanwhile, once the only party capable of winning a majority in both Catalonia and Andalusia—the key to power in Spain—is now riven asunder over a referendum that would win votes in Catalonia but lose them in the Socialist bastion of Andalusia, and indeed in most of the rest of Spain.

The best solution to allow Spain and Catalonia to move on, together or apart, would probably be a referendum similar to the Scottish consultation in 2014. But there are too many votes to be won from more polarization and dragging this issue out over many more years for the big parties to make a real bid for a rapid settlement of the Catalan question.

Editor’s note: An earlier version of this article mistakenly said the Partido Popular (PP) has run Spain since 2004, rather than 2011. The article has been updated to correct the error.