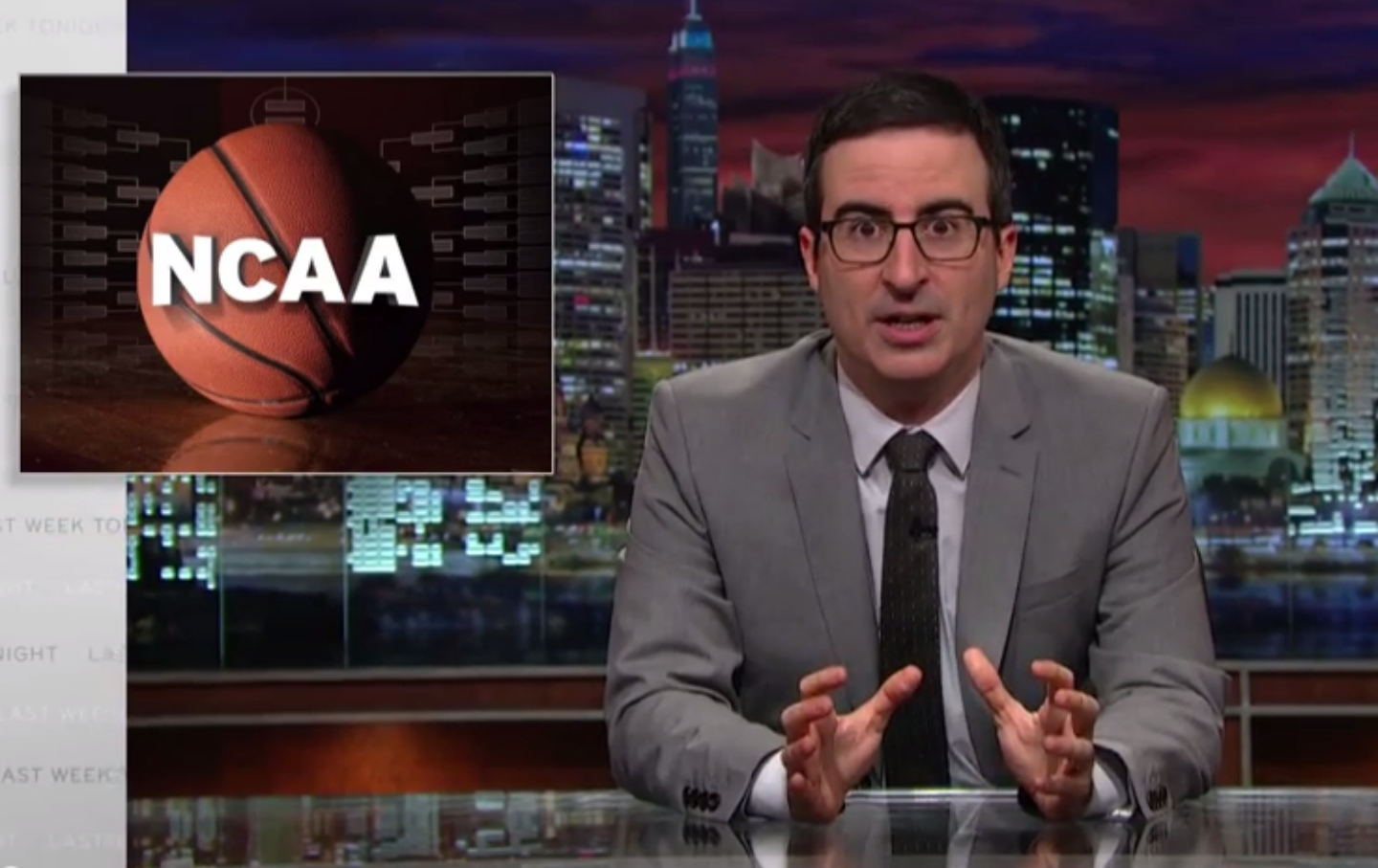 If you haven’t witnessed John Oliver’s scabrous, side-splitting shreddage of the NCAA, stop reading for twenty minutes and watch. You will cackle, reach for the nearest stone, and while still joyously bent over, throw it in the general direction of the NCAA’s $85 million headquarters in Indianapolis. Oliver launches a merciless, unassailable argument that the NCAA and their multibillion-dollar machine of nonprofit amateurism is nothing but hypocritical rot. His portrayal of a truly “authentic” videogame deemed “March Sadness,” involving hungry, exhausted players, narcissistic, rageaholic coaches and administrators making snow angels in piles of money, should be watched as a precondition of filling out a bracket.

Yet there is a non-satirical sadness in seeing John Oliver so thoroughly dissect the hypocrisies and odious, sulphur-smelling injustices of the NCAA, because while perhaps never done as hilariously, it has also been done, and done and done again. It recalls Taylor Branch’s epic long-form article about the NCAA’s having “the whiff of a plantation,” a seeming slam-dunk if there ever was one. It recalls arguments made for years by sports columnists like Kevin Blackisone, coaches like Jerry Tarkanian, and an endless line of former NCAA athletes who found themselves used up and tossed aside. In fact, an entire generation of activist athletes, from 81-year-old Bill Russell to 26-year-old Richard Sherman, have argued that the system is unjust. Even the man who founded the modern NCAA, Walter Byers, the executive director of the NCAA from 1952 to 1987, once said, “The coaches own the athletes’ feet, the colleges own the athletes’ bodies, and the supervisors retain the large rewards. That reflects a neo-plantation mentality on the campuses.” The argument against the NCAA is such an entrenched part of the public record, the burden is on those who dare stick their head above ground to defend it.

Yet the system not only survives. It thrives. The same college campuses where people are presumably taught about the importance of liberty, debate and winning the battle of ideas have evidence right on their campuses that none of these post-feudal intellectual staples are worth a damn outside the ivory tower.

The tragic reality was made plain a year ago by then Northwestern quarterback Kain Colter, who said, “Right now the NCAA is like a dictatorship. No one represents us in negotiations. The only way things are going to change is if players have a union.” Colter tried to organize a union, and the response was not only an ugly campaign against the project organized by his coach but state legislatures in Michigan and Ohio passing laws to make sure that players could not organize themselves.

Yet despite the NCAA’s well-funded efforts, neither Colter nor the presence of an organized struggle are done. Last week, a new organization of university professors called the College Athletes Rights & Empowerment Faculty Coalition was launched, aimed at winning actual compensation for student-athletes. Kain Colter has lent his support to the initiative. The NCAA’s response to these efforts was the familiar blather from spokesperson Stacey Osburn that “We strongly disagree with the notion that student-athletes are employees” and that “We want student-athletes—most of whom will never make it to the professional leagues—focused on what matters most, namely finding success in the classroom, on the field and in life.” One wonders how Ms. Osburn could attach her name to something that reads like a Hallmark card paean to indentured servitude. Despite her words, the system is perversely set up to ensure that success in the classroom is a near impossibility. I just returned from Austin, where I learned that the University of Texas is sending their basketball team to China in the middle of next semester to build their burnt-orange brand. No discussion has been permitted either about the educational value of the trip or how “student athletes” will make up their work upon returning to campus. It will however aid the almighty mission of former NBA executive turned school athletic director Steve Patterson to build revenue up to a quarter of a billion dollars.

It is so damn easy to expose the NCAA, but it will never be enough because it is immune to argument and utterly oblivious to derision. Taylor Branch, John Oliver—hell, the reincarnated genetic splicing of Jonathan Swift, Dorthy Parker and James Baldwin could never bring even a hint of red to NCAA President Mark Emmert’s cheeks. It is, as Kain Colter described, a dictatorship, except its great weapon is not torture. It’s the absence of shame.