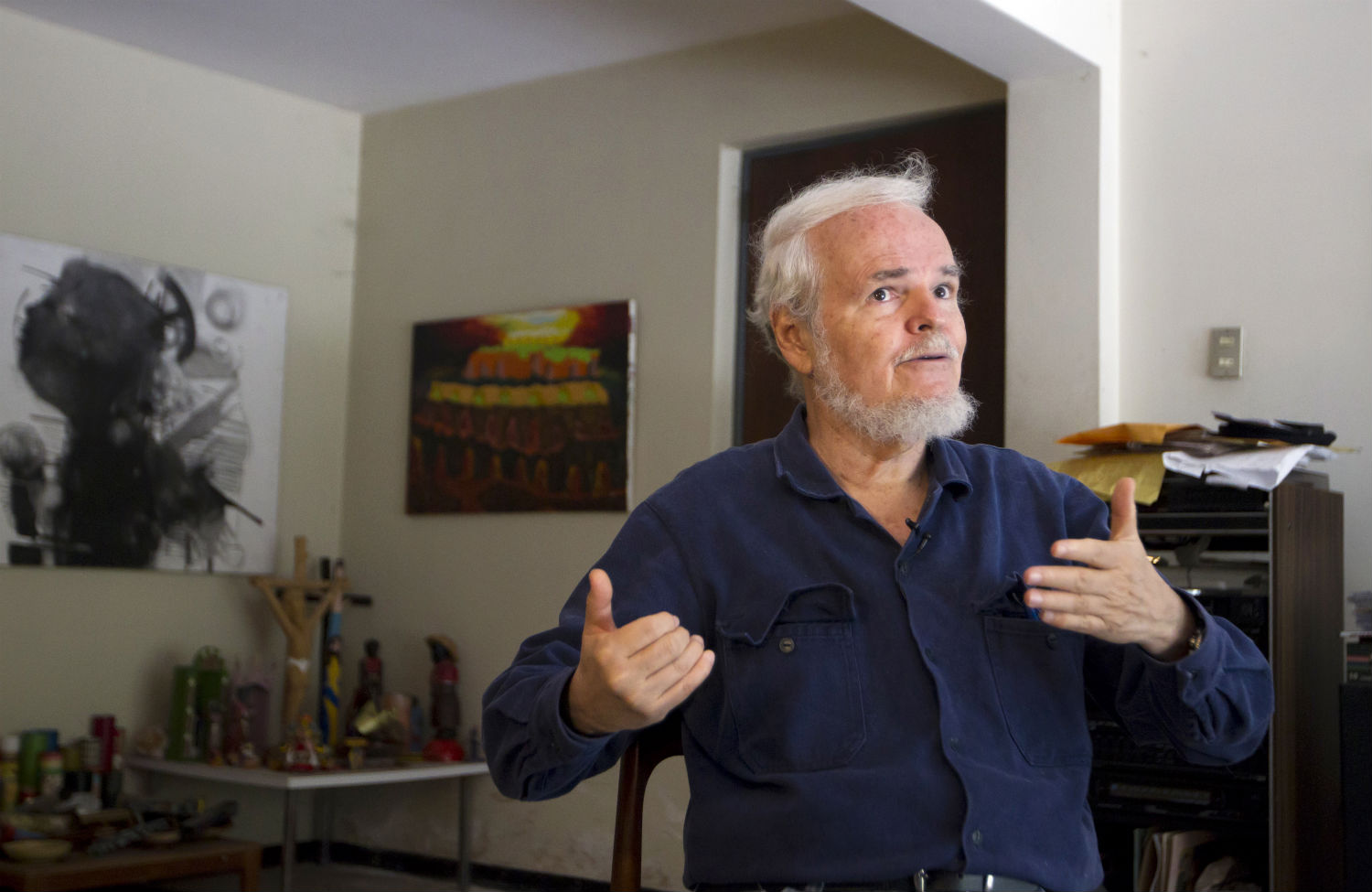 The novelist, essayist, historian and playwright Luis Britto García is a titan of Latin American literature and thought, though he’s not nearly as well known on this side of the cultural border between “America” the country and América the continent. Many consider this prize-winning author the most important writer and intellectual in Venezuela. In addition to his novels and many other books on language, culture and politics, Britto García has written extensively on the role of the media in Venezuelan politics. Last month, Nation contributor Roberto Lovato met with Britto García, 73, in his home in Caracas to talk about the role of the media in the current conflict.

Roberto Lovato: You’ve written a lot about the media and politics in Venezuela. How are the media behaving in the current conflict?

Luis Britto García: The current situation in Venezuela has a historical context that must be understood. During the previous coup attempt, in 2002, the television networks in particular played a determining role in what amounted to a media coup. The media themselves became political actors, something I’ve documented in my book Media Dictatorship [2012]. Just consider, for example, how the Carmona decree—in which the coup leaders essentially gutted the Constitution—was signed by representatives of the major media. This same media also edited out images, stories and facts that didn’t fit their narrative.  During the coup, the television crews even showed up before the repressive acts were performed by the coup leaders.

And how are things similar or different today?

In this current coup attempt, the television networks have adopted a different tone, but the radio and social media and international press are playing a leading role, using images of repression in Egypt, Syria, the United States and other countries to depict supposed repression in Venezuela. Look, for example, how a few hundred violent students come to symbolize “students,” “youth” and “the country.”

Are you saying images of rock-throwing, tire-burning youth are inaccurate or fake?

No. I’m saying we’re a country of 29 million inhabitants. I’m saying that in Venezuela, nine and a half million Venezuelans are studying. Of these, more than 2.5 million are in higher education. What does that mean? That almost one in ten Venezuelans are in higher education. The overwhelming majority of them are in perpetually free institutions. This whole image that the media try to convey of a “student rebellion,” which [jailed opposition leader] Leopoldo López tries to project—the image that all youth are against the government, against [President Nicolás] Maduro, against Bolivarianism—is absolutely false. Yes, clearly there are young people who are against the government, for various reasons. We’re a free country, and people can think however they like. But it’s just a fraction, a small minority of the entire student population—something the international media aren’t reporting.

And what else do you see being edited out of the current Venezuela story in the media?

There’s an important split in the right that is also not being reported. To begin with, they’ve lost eighteen of the last nineteen major elections—and they’ve protested all of them, except the single referendum that they won. It’s also important to point out that López is being projected as the latest in a long line of messiahs of the right, even though he doesn’t even pull together the vast majority of the [voters] of the right. The right supported [former presidential candidate Henrique] Capriles Radonski in three elections, and he lost all of them. In the internal elections of the right, López ended up in third place; I think he got something like 2 percent of eligible voters. So, like I told you, the right wing in Venezuela is very divided. It plays with a messiah who’s going to hand them an instant paradise, and if he doesn’t do it, they become disillusioned, disenchanted with him, which is precisely what will happen with López, who has a strong rift with Capriles. López and his ally, María Corina Machado, another extreme right-winger, have chosen the option of desperate street violence. Capriles, meanwhile, has cautioned against “generating false expectations of change through street actions.”

So how did Capriles and López come to prominence?

There was a collapse of the traditional parties. From this void emerged the idea of founding another right-wing party. Study the rise of Capriles, López and their right-wing parties, and you see how weird politics in Venezuela are.

What do you mean?

Before becoming leaders of the right, López and Capriles spent part of their youth in an almost comical group called “Tradition, Family and Property.” It was a fanatical fascist group, somewhere between a religious and a political organization. They used to stand out on street corners of urban neighborhoods with large Superman-style red capes, berets, things like that. It was this ultra-super-reactionary, right-wing group. Yes, red-caped, like Superman! From there, they became the right-wing Primero Justicia [Justice First] party, which arose out of a television show begun by a lawyer named Julio Borges [now leader of Primero Justicia].

A television show? You mean that Primero Justicia, one of the most important parties of the right and a party that WikiLeaks cables tell us was partly funded for more than a decade by the United States through the National Endowment for Democracy, actually started thanks to a TV show?

Yes. Out of nowhere, all of the sudden Borges has a show on television that’s called Justice for All. It was a show where he played the role of a justice of the peace, and plaintiffs were brought before him. These are often neighbors suing each other, and he tries to offer a sort of charismatic mediation of disputes. [In the show they] had the litigants pass through a narrow hallway so that they would run into each other, getting into fights and hitting each other.

Yes, it’s copied from reality shows in the United States. The curious thing, however, is that this program was converted into a political party under the leadership of Julio Borges. From Justice for All, Borges and his allies created Primero Justicia. The right needed something like a political right wing, because the social democratic and the social Christian parties that have traditionally dominated Venezuelan politics were so discredited that they didn’t constitute a force any longer. This new party was developed on one side by Capriles, and on the other side by López. So, the media also had a role in helping to create the current leaders and splits in the right.

Are you saying that the strategy and tactics of the right have an element of political and media theater?

In a way. Look at the violent actions like grabbing and holding middle-class people prisoners in neighborhoods with barricades called guarimbas. I’ve never understood it. This “strategy” was “invented” by a Cuban-Venezuelan named Robert Alonso, brother of a Hollywood actress, Maria Conchita Alonso, who did a movie with Schwarzenegger. Mr. Alonso invented the guarimba as a way for a fractious minority to gain media attention by shutting off the street. They chuck trash or debris or waste so that their neighbors can’t get in our out. It gets media attention, but also immobilizes the right, a real political marvel. The guarimberos are cutting themselves off from the very people who could support the right. You hear the complaints, but not in the news reports. So what are you thinking, shutting down, burning down your own neighborhoods?

What do you think will happen?

We’ve seen a lot of this before. The cameras like the guarimbas, but, looked at from within the country, it’s a ludicrous political action. Insane. They tried this out before, in 2004, and it failed. They’ve had political messiahs like Leopoldo López, most of whom have been forgotten. You saw the future in the recent Carnaval celebrations. The right called for a boycott of Carnaval. The poor rejected their call and filled the beaches and the streets with their celebrations. Yet again, the international media didn’t take notice. The Colombian novelist William Ospina says that in the entire world, the rich celebrate and the poor protest. Only in Venezuela do the poor celebrate and the rich protest.