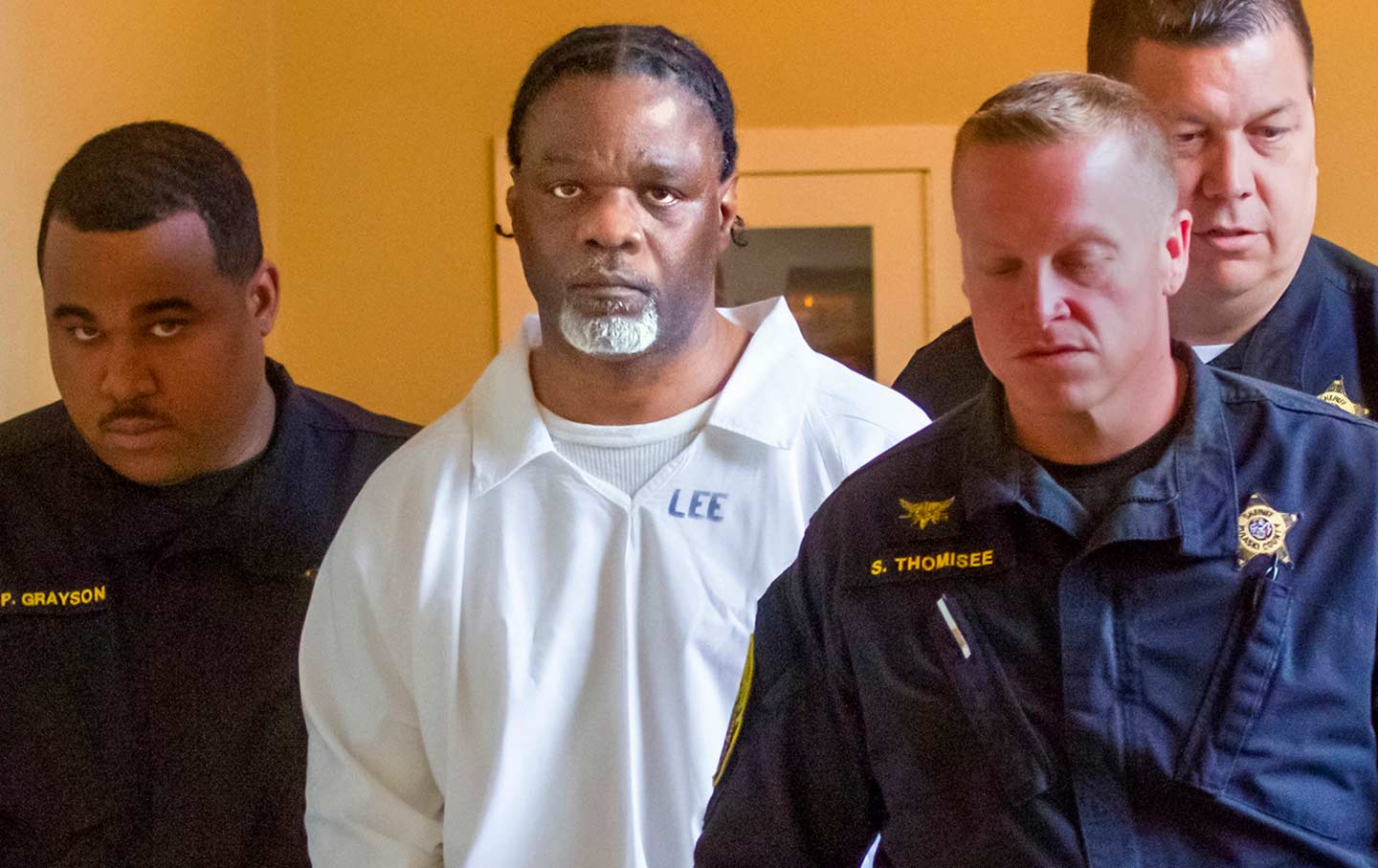 Ledell Lee appears in Pulaski County Circuit Court on Tuesday, April 18, 2017 for a hearing in which lawyers argued to stop his execution. (AP Photo / Benjamin Krain)

The state of Arkansas put Ledell Lee to death on Thursday night. Flurries of legal filings came towards the end of his grim journey through the criminal justice system, as is typical in death penalty cases. But among those lawsuits were some surprising names: the pharmaceutical companies that manufactured and sold one of three ingredients in the lethal injection cocktail that later ended Lee’s life.

It’s a strange twist in America’s long relationship with the death penalty—and pressure from the pharmaceutical companies explains why Arkansas is going through a barbaric rush to execute as many death row prisoners as possible before there are no more drugs left.

Arkansas has scrambled to complete these executions before the end of the month as their supply of midazolam, one of the key drugs commonly used in lethal injections, is set to expire. The governor and attorney general have both insisted the executions will take place before May 1, no matter the challenge.

These companies don’t quite see the same duty to God to participate in executions, and have joined a chorus of pharmaceutical manufacturers and distributors who over the past decade have increasingly refused to sell their drugs to state governments for lethal injection.

“Our products were developed and are approved solely for patient care, and we expressly restrict the sale of our products for use in lethal injection procedures,” wrote Fresenius Kabi in a release following its legal filings.

Much of the controversy in Arkansas centers on the midazolam itself, a common sedative. Not only is the drug going to expire, but Arkansas likely won’t be able to buy any more of it or the two other drugs used in the lethal injection cocktail.

As of 2016, there are no longer any FDA-approved manufacturers who will sell midazolam for lethal injections. Pfizer joined more than 20 U.S. and European companies to ban the use of their products for executions last year. The Associated Press identified West-Ward Pharmaceuticals as the likely manufacturer of the midazolam, and they swiftly filed an amicus brief with another company linked to Arkansas prisons to stop their drug from reaching the execution chamber.

West-Ward sells its products only to pre-authorized consumers who then sell to distributors. The pharmaceutical company has agreements with all of those consumers barring them from selling to a party who would use the drugs for lethal injection.

The midazolam is hard to track down the chain of distribution, however, and state prisons do have legitimate reasons for buying it other than execution, including for normal health care purposes, such as minor surgery. With the serialization process as it is, West-Ward can track down to a specific box they sold but not to a single vial, according to Clarke.

“We have pretty robust controls in place to ensure that the drugs are used for the purposes that they’re intended for, but it’s quite challenging,” she said.

Meanwhile, defense lawyers and anti-capital punishment advocates have successfully won stays for several of their clients by taking aim at Arkansas’ prisoners’ lack of access to independent health experts.

Two men who had been scheduled to die Monday were granted stays over mental health concerns. A staggering six of the eight people slated to be executed have low IQs or histories of mental illness, including diagnoses of schizophrenia and bipolar disorder, according to a study carried out by the Fair Punishment Project, a project of Harvard Law School.

Don Davis, who was scheduled to die Monday, received a last-minute stay over his lack of access to an independent mental health expert. In the course of his 25 years on death row, he had never been given an independent mental exam, and IQ tests from his childhood indicated that he falls in the range of being mentally impaired.

U.S. residents often imagine prisoners only end up on death row if they are “the worst of the worst,” said legal director of the Fair Punishment Project, Jessica Brand. But none of these men is the portrait of a calculated, cold-blooded killer, she says, even if some of their crimes have been heinous.

“These are among the most vulnerable men in society: people who [hallucinate] dogs in prison, people who watched multiple pets be murdered by their parents, paranoid schizophrenics, people with a 70 IQ — that’s not the most culpable. That’s not the worst of the worst,” she said.

Mental health isn’t the only concern in these cases. Even if independent experts could verify the competency of all eight death row inmates, experts argue that the drug cocktail used in Arkansas is cruel and unusual in and of itself.

“The concerns around the executions being ‘cruel and unusual punishment’ really focus on this three-drug procedure and the risks it presents causing grievous pain and suffering,” said Megan McCracken, a lethal injection litigation specialist at the law school of the University of California, Berkeley.

The drug cocktail works by sedating the person, using a second drug to stop their breathing, and then injecting a third drug to stop their heart. While proponents of the death penalty have described the process as painless, it is anything but, according to McCracken. The skeletal paralytic used causes respiratory distress, often waking the prisoner up from their sedation and making them fully aware of the third step:

“The third drug, the potassium chloride: if a person is aware, then it would burn incredibly as it moves through the veins, and then when it reaches the heart it causes cardiac arrest. It’s an incredibly painful drug,” she said.

In the case of Arkansas, the quick succession of executions also increases the likelihood that the prison team will make a mistake, causing even more pain to the person. Some states require a minimum of one week between executions, and the state of Missouri requires an entire month to allow the execution team to recover, according to McCracken.

With ten days still left in the month, however, Governor Hutchinson still has plenty of time to follow through on his promises, regardless of the restrictions from pharmaceutical companies and lawyers alike.