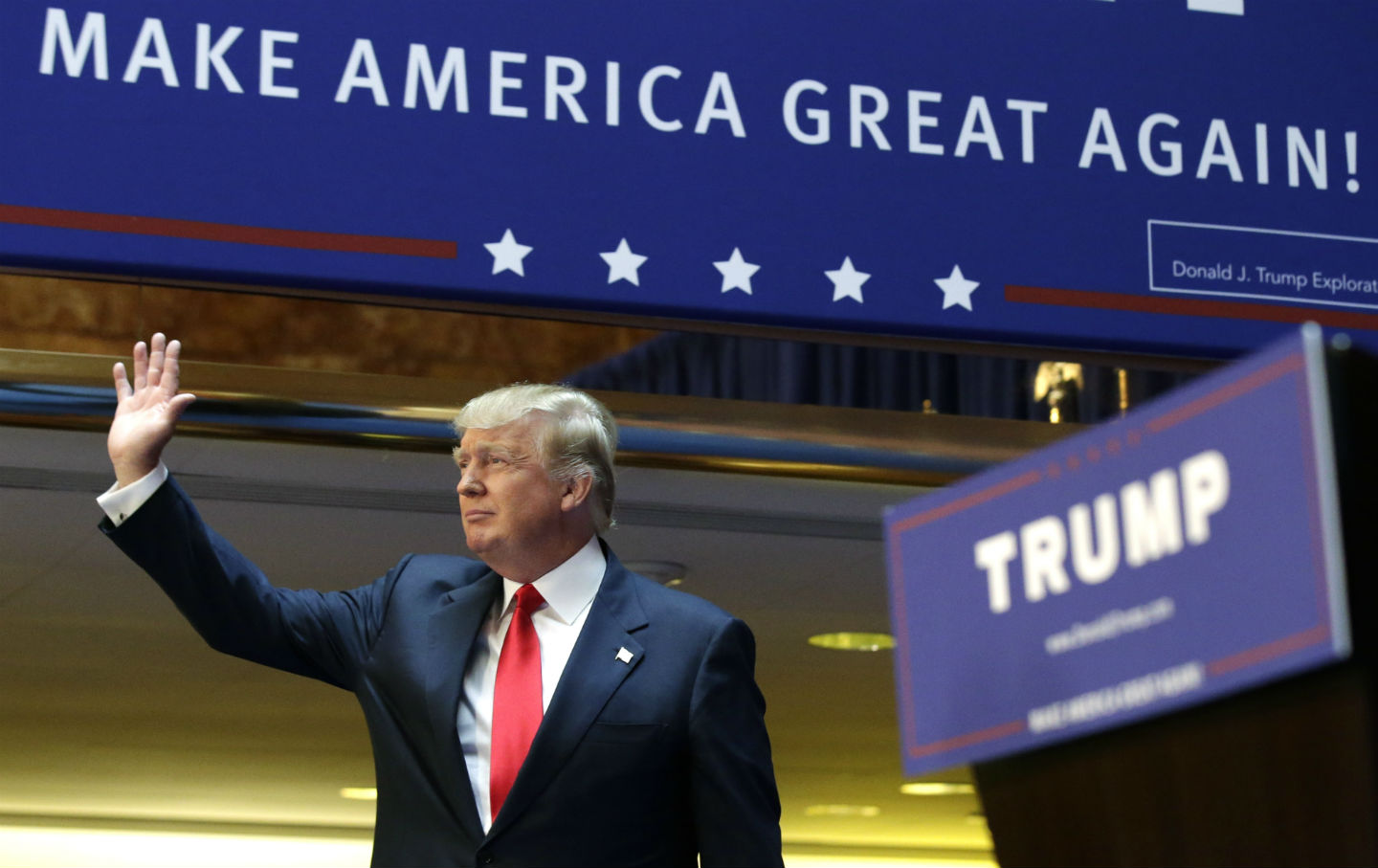 In the middle of the political food fight that was the ninth Republican presidential debate, the front-runner suddenly abandoned the petty politics of the moment and delivered a message that mattered less to the scramble for South Carolina primary votes and more to the November fight for the battleground states that ring the Great Lakes.

“This country is dying. And our workers are losing their jobs,” Donald Trump declared. Noting the announcement of plans by the air-conditioner company Carrier to transfer production (and 1,400 union jobs) from Indianapolis to Mexico, the billionaire said, “Carrier is moving. And if you saw the [workers]…. They were crying.” Promising a no-more-tears presidency, Trump said he’d renegotiate “trade pacts that are no good for us and no good for our workers” and tell corporations to keep production in the United States or “we’re going to tax you.”

The pundits and political insiders who have missed every other warning sign from the 2016 race missed that one as well. But Trump’s recognition of shuttered plants and crying workers struck Ohio Congresswoman Marcy Kaptur. “I heard him. I heard exactly what he was saying, and so did the people of Indianapolis and Indiana,” Kaptur said. “So did everyone else who has lost a job to offshoring and outsourcing, or who knows they are just one more trade deal away from losing a job.”

Kaptur, a Democrat who represents a multiethnic, multiracial district stretching from Toledo to Cleveland, has decried Trump’s divisive remarks as shameful deviations from the American promise of “unity, not hatred.” But she cautions Democrats against assuming that the revulsion to Trump’s hateful language and crude politics will immediately disqualify him in the eyes of scared and angry voters in states that have been essential building blocks for Democratic wins in presidential races of recent decades. Kaptur’s not alone in this view.

Service Employees International Union president Mary Kay Henry warns that Trump could win a good many union votes—and perhaps the presidency—if he secures the Republican nod. “I think this is a very dangerous political moment in our country,” said the head of the SEIU, which has endorsed Hillary Clinton for the Democratic nomination, during a January discussion of Trump’s appeal. “I think he’s touching this vein of terrible anxiety that working-class people feel about their current status, but more importantly, how terrified they are for their kids not being able to do as well as they have, never mind doing better.” Henry noted that internal polls of union members across the country reveal a “broken sense of the future” and raise the prospect of an emotion-driven election in which it is “easier [to] appeal to fear than to what’s possible.”

“I don’t think the Democrats are ready for this,” adds Ralph Nader, the consumer activist and former presidential candidate. “Once he gets these wildcats off his back, once he gets the Republican nomination, then Trump becomes the builder again. He’s already said he’s going to be the greatest jobs president in history. He hasn’t pushed that line too hard in the primaries because he doesn’t want to come off as something other than a conservative. But if he’s the nominee, watch out.”

“Watch out”? Really? Isn’t Trump supposed to be unelectable? Isn’t he too bigoted, too crude, to be taken seriously? That’s what Republicans told themselves for most of 2015. But since his big wins in the New Hampshire and South Carolina primaries, the GOP establishment has begun to adjust to the prospect of a billionaire nominee with a flair for grabbing media attention, shaping the debate, and shredding opponents.

Yes—watch out. “This is an unprecedented election in so many ways that we don’t know what electability is,” cautions Ilyse Hogue, president of NARAL Pro-Choice America, which has backed Clinton. “What we do know is that Trump is better positioned to pivot, to Etch-A-Sketch his message, than the other Republicans. That constitutes a threat.”

Trump has already proved to be competitive with Clinton and her insurgent challenger, Vermont Senator Bernie Sanders, in the polls from battleground states like Florida, North Carolina, and Colorado. Measures of hypothetical match-ups should always be considered with skepticism when the parties are in the midst of nomination fights—and when potential independent candidacies are being explored. But poll numbers and interviews with Democrats in key states like Ohio, Pennsylvania, and Wisconsin indicate that the 2016 Democratic nominee could face a fight for industrial states that provided vital support for Barack Obama in 2008 and 2012. And Trump has yet to make his play for those states.

Right now, Trump is still peddling the snake-oil blend of xenophobia and bigotry that plays well in Republican primaries (one recent survey in South Carolina found that 38 percent of his backers believe the Confederacy should have won the Civil War). If he’s the Republican nominee, however, he’ll be confident about South Carolina. And Trump is all but certain to have what Hogue refers to as his “Etch-A-Sketch” moment, pivoting toward economic-populist themes that, while still crudely nationalistic, might attract independents and Democrats in key states. Republican pollster Frank Luntz says that in the focus groups he’s conducted, he has regularly found people who voted for Obama twice but now say “they would consider Trump.” Why? Because Trump is speaking to the fears of Americans who have lost faith not just in establishment politics, but in establishment economics. And he is likely to do a lot more of that.

It’s in the industrialized swing states where Trump’s promise to protect jobs and change trade policies could resonate among blue-collar workers. AFL-CIO president Richard Trumka acknowledges that workers are “talking to me about Donald Trump.” Union leaders fret about internal surveys that show the billionaire is attracting greater support than is usually afforded Republicans. While much of it comes from white male voters, these union leaders say they’ve seen some evidence of a broader openness to Trump’s message. Luntz claims that his candidacy “would get the highest percentage of black votes since Ronald Reagan in 1980.” That’s not a high bar—exit polls gave Reagan 14 percent—but the prospect of losing any working-class votes in states like Wisconsin, Indiana, Michigan, Ohio, and Pennsylvania should be a wake-up call for Democrats.

“The two major parties will have to change, or they are likely to be changed by voters who have had enough,” argues the Rev. Jesse Jackson. But what if one party changes—however cynically or crudely—to address the fears of the moment, while the other does not? What if Trump turns up the volume on a populist message while the Democrats run a more cautious campaign?

Sanders supporters point to polls in some battleground states that show him faring better than Clinton in matchups with Trump. “Bernie’s where the Democrats need to be,” says RoseAnn DeMoro, executive director of the National Nurses United union, regarding Sanders, a longtime critic of corporate-friendly trade pacts. “He’s speaking to fears that working families have about the future, but he’s not dividing people the way Trump is.”

Kaptur, who has not endorsed a candidate in the Democratic race, made a similar point on a drive from Toledo to Lorain, where the steel mills are cutting production and in some cases shutting down. “These people have been hit over and over and over again. They’ve retrained. They’ve done everything they can to survive—but the plants keep closing. They’ve been battered, and they’re sick of it. They want security, and this country is not delivering security. When Bernie talks about this, I think it touches people. Clinton says a lot of the same things, but I don’t hear the same passion.”

That’s a fair critique. But the counter to Trump’s appeal can’t merely be to debate on his terms. “It won’t work to go ‘My populism is bigger than your populism,’” Hogue says. A smart challenge must involve a full-spectrum response to the billionaire’s appeal as “a builder and a doer,” Nader says. “He reaches millions of people by making them comfortable with their prejudices. The press sometimes goes after him on that, which is good. But the press never gets to his vulnerabilities—his tax returns. There’s so much there, but Trump has diverted attention from a real examination of his financial dealings. Progressives can’t get distracted the way conservatives have. They have to expose him.”

Exposing the billionaire as a crony capitalist means pursuing the question of whether a candidate who opposes a minimum-wage hike would really take on multinational corporations in order to save jobs in Flint and Youngstown. In addition to challenging Trump himself, savvy observers say, it is vital to challenge Trumpism—the politics of division that scapegoats, stereotypes, and appeals to bigotry. Trumka says that “a campaign fueled by contempt and exclusion is bad for working families,” and labor unions are preparing to make that point with an aggressive campaign similar to their 2008 push to get union members behind Obama’s candidacy.

The challenge to Trump must address economic anxiety while also emphasizing pluralism, says Hogue. “Where Trump’s weakness is, and where his opponent will have an advantage, is that the way this country genuinely experiences economic inequality has everything to do with your race, your gender, your treatment as an immigrant—all these issues.” Clinton has begun speaking to this. Even if Wall Street is reined in and economic challenges are addressed, she warned in the Democratic debate in Milwaukee, “we would still have racism holding people back. We would still have sexism preventing women from getting equal pay. We would still have LGBT people who get married on Saturday and get fired on Monday.” That’s smart—as was Sanders’s call in the same debate for “a political revolution in which millions of Americans stand up, come together, [and] not let the Trumps of the world divide us.”

Clinton and Sanders are both evolving—and improving—as candidates. This is important, because if Trump is the GOP nominee, he will not be beaten with old talking points or a cautiously calculated message. “The Democrats have to get much better at making the connections between the water crisis in Flint and the closing of factories in Flint,” Kaptur says. “They have to make all the connections between trade and poverty, between deindustrialization and hollowed-out cities. People are hurting for a lot of reasons. Democrats have to recognize that hurt, and they have to explain that a politics of division is never going to address it.