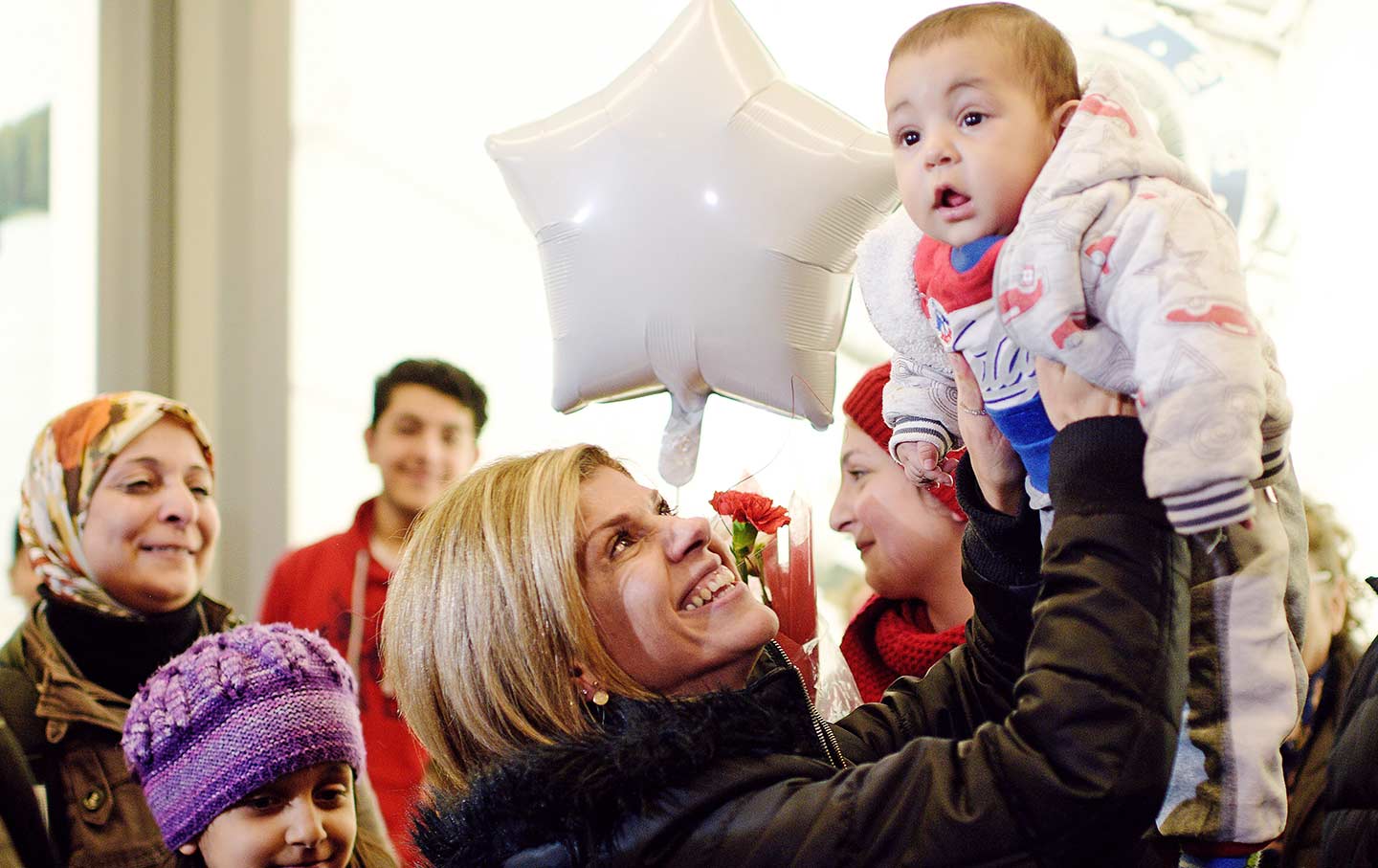 Tima Kurdi never wanted the spotlight. But in September 2015 the Syrian native and longtime Vancouver resident found herself at the center of a tragedy when her sister-in-law and her two nephews drowned during an attempted crossing from Turkey into Greece. The image of the body of her 2-year-old nephew, Alan Kurdi, washed up on a beach in Turkey made headlines around the world and brought much-needed attention to the humanitarian catastrophe that is the war in Syria.

Kurdi was in Washington this week to lend her voice in support of Hawaii Democratic Representative Tulsi Gabbard’s HR 608, the Stop Arming Terrorist Act, which would put an end to the counterproductive, unaccountable, and immoral CIA “train and equip” program in Syria. The act, which has attracted eight co-sponsors, including North Carolina Republican Walter Jones and Virginia Republican and Army veteran Thomas Garrett, would prohibit “the use of federal agency funds to provide covered assistance to: (1) Al Qaeda, Jabhat Fateh al-Sham, the Islamic State of Iraq and the Levant (ISIL), or any individual or group that is affiliated with, associated with, cooperating with, or adherents to such groups.”

Incredibly, after nearly six years of war, the US government continues to fund rebel groups that, far from being moderate, often subscribe to an Islamist ideology long funded and propagated by the Gulf State tyrannies Saudi Arabia and Qatar—with, in recent years, a healthy assist from Erdogan’s Turkey.

The role of Turkey in not only turning a blind eye to ISIS’s takeover of vast swaths of northern Syria but also exacerbating the refugee crisis by its callous treatment of Syria refugees is often under-reported or perhaps—given the severe media crackdown Erdogan initiated after the failed coup attempt by the Turkish military last summer—intentionally overlooked by Western reporters who cover the Syrian conflict from Istanbul.

Kurdi says what she saw in Turkey when she visited her brother and his family in 2014 “was worse than I could ever have imagined. I saw people in the streets without homes, without hope. Children were hungry, begging for a piece of bread.” The West deserves some share of the blame for the refugee crisis, triggered by a savage war during which war crimes were routinely committed on all sides. Instead of acting to alleviate the suffering through a combination of diplomacy, aid, and generous offers of resettlement, often the United States and its European allies merely settled on a strategy of bribing Turkey to do more.

In any case, when Kurdi returned to Vancouver she decided that she wanted to bring her family to Canada, but “I couldn’t get them approved to come in. Eventually, my brother Abdullah and his wife, Rehana, like thousands of Syrians, decided they had to take the risk and trust a smuggler they thought would bring them to freedom, safety, and hope.”

Gabbard’s bill takes on an even greater urgency in light of recent events. Last Thursday UN-backed peace talks between representatives of the Syrian government and rebel factions resumed in Geneva, but progress, such as it was, stalled over the weekend when suicide bombers loyal to a the rebel alliance Tahrir al-Sham killed 42 people in the government-held Syrian city of Homs.

Tahrir al-Sham consists of rebel factions that include Nour al-Din al-Zinki (recipients of US funding as recently as 2015), which gained worldwide attention when its members cut the head off of a child last summer; and the allegedly moderate US-funded rebel group Fastaqim, which recently allied itself with Ahrar al-Sham, which itself adheres to an extreme Salafist ideology and is a constituent part of Tahrir al-Sham.

Yet, as The Washington Post reported this past Sunday, under a “three-year-old program initiated by the United States, rebel groups that have been vetted by the CIA receive support in the form of salaries, light arms and ammunition, and limited quantities of anti-tank missiles.” Currently there are around a dozen such US-backed groups. According to the Post, “The supplies are overseen by a military operations center known as Musterek Operasyon Merkezi, or MOM, comprising representatives of the US-backed Friends of Syria.”

Alarmingly, according to a report on February 8 in the Financial Times, “MOM-backed commanders”—that is to say, US-backed rebel commanders—“regularly inflated their forces’ numbers to pocket extra salaries, and some jacked up weapons requests to hoard or to sell on the black market. Inevitably, much of that ended up in Isis hands.”

“The CIA knew about this, of course,” a former US-backed rebel commander told the FT, “everyone in MOM did.”

This wouldn’t be the first time the United States—perhaps inadvertently, but perhaps not—worked to strengthen ISIS’s position. As the redoubtable Middle East correspondent Patrick Cockburn has reported, “the US has studiously avoided attacking ISIS from the air if it is fighting the Syrian army because it is frightened of being accused of helping President Bashar al-Assad to stay in power.”

By now, it should hardly need saying that the passage of Gabbard’s legislation, given all that we know about America’s involvement in the Syrian civil war, should be a top priority for the 115th Congress.