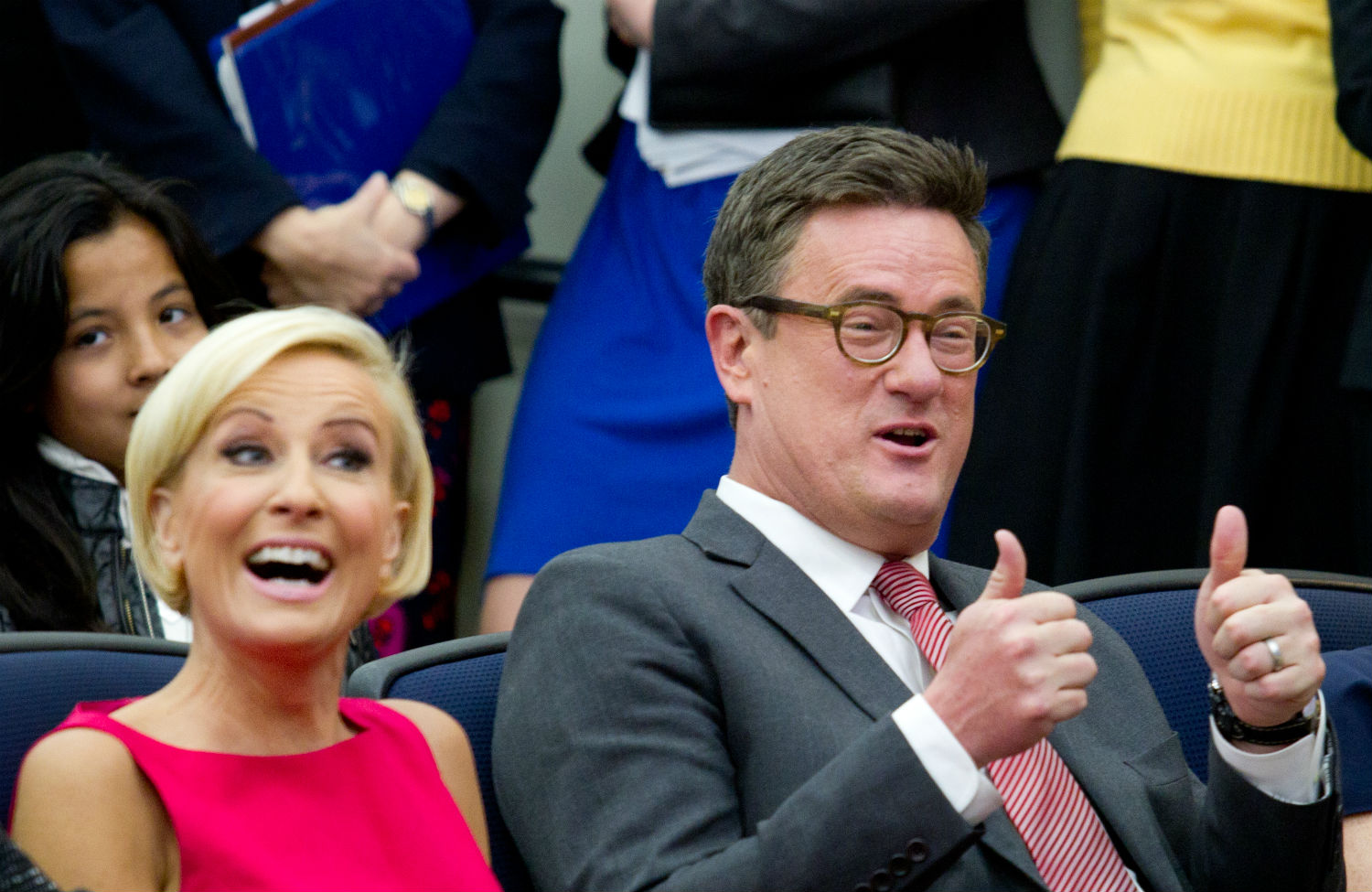 I’ve tried to avoid posting yet again on Morning Joe, but the strained psychodynamics of the show have bumped it into the faux news again. And it’s just so irresistible.

On The Daily Show last week, Samantha Bee did a nearly seven-minute bit on MJ, portraying Joe Scarborough, Mika Brzezinski and supporting players as a sicko family. It was painfully unfunny, but it did get in some jabs about how the “boy pundits” are “always completely agreeing with their dad.”

The more amusing and yet more damning parody of the show, however, came in the form of “Morning Jolt,” a 4:23-minute video from Morning Joe itself. Launched last week, with clips from it now running as MSNBC promos, “Morning Jolt” (see it below) inadvertently reveals why the relationship between Joe and Mika, and between Joe and the boy pundits, is getting increasingly hard to watch.

Starting with a gospel singer belting “Jesus get me through this day,” “Morning Jolt” is intended to be a self-deprecating and obviously exaggerated look at what the MJ crew goes through to get to work in the still dark hours of the morning. They did something similar in 2011, in a bit panned as “icky” and sexist—Joe and the boys carouse all night while Mika jogs before dawn in a skin-tight dress. But this newest video moves beyond sexism: the real jolt is the smell of a little S&M in the morning.

Mika portrays herself (as she often does on the show) as an overly diligent but discombobulated dame. She drops her coffee and her many newspapers; she trips and breaks a stiletto heel; driving herself to work (what, no limo?), she nearly runs over a construction worker and parks her SUV right on a Rockefeller Center sidewalk.

Joe is the laid-back screw-up, a guy’s guy who oversleeps and casually rebels—when the alarm clock rings at an ungodly hour, he throws it onto a pile of other clocks.

It’s then that the promo starts to edge into Republican war-on-women territory. When Mika calls and Joe sees her photo on his smart phone, he hurls it too, but this time into the toilet. Other cell phones marinating there indicate that she bothers him daily. So, hmmm… maybe she’s a little unstable, stalkerish even—the next time we see Mika’s picture on a cell, she's bugging sex symbol Bradley Cooper, who tosses his phone into the trash. The camera catches Brzezinski’s face landing on a paper plate smeared with leftovers.

When Joe and Mika eventually meet in the corridor leading to their studio, they become the normals, braving a gauntlet of stereotyped New York weirdos—a juggler, a mariachi band, a half-naked guy throwing glitter at them, two hot babes fighting. At the end, in the video’s only dialogue, Mika tells Joe, “I tried to call you.” “Yeah,” he says, “I, um, dropped my phone.”

Even if Mika and Joe’s bickering has become their trademark shtick, what goes down in “Morning Jolt” is different. It’s not about politics or even who interrupts whom. Putting her face in the toilet and then the trash is simply demeaning. It’s odd that Mika (not to mention the show’s producers) would want to blare that to a national audience.

And you might think that Joe himself wouldn’t want to go there. After all, he was pretty humiliated last year when, after Mika called him a chauvinist, he angrily snapped his fingers at her, as if to make her come to heel. (They later apologized to each other.) And the same day that “Morning Jolt” debuted, Mika and Joe both railed against the report that “exonerated” Chris Christie for branding Bridget Kelly as an emotionally unstable wreck after she was dumped by a guy she worked with, Bill Stepien. The report’s sexist, gratuitous attack, Joe later said, was “shameful.”

But Joe and Mika are going there because they’ve apparently convinced themselves it’s all a joke. Last week Joe had to fend off people who didn’t get how funny it was when, after Mika told him to stop obsessing over the missing Malaysian jet, he told her to lower her voice. “For humorless liberals who thought I was being rude to Mika today,” he tweeted, “my sincere apologies that you are too thick to get the joke.”

Ok, let’s say it was a joke. But the lameness of such jokes and his thick sarcasm often make it hard to see the humor. It’s not like Scarborough is Colbert, comedically playing the role of a guy who condescends toward women. With the possible exception of his #CancelColbert fracas, it’s usually crystal clear where Stephen stands.

Joe, however, operates from a more passive-aggressive place. There’s an anger in him that he denies but can’t quite hide from view. For her part, Mika swings between vigorously defending herself and willingly making herself the butt of a joke gone ugly.

As Samantha Bee points out, you tune into Morning Joe to see Joe and Mika squabble and wonder how far they’ll go. But the dramatic tension only works if you think they have a real reason to stay together, like Archie and Edith or Ralph and Alice.

Joe, of course, wants us to believe he’s just horsing around, and the video’s fantastical morning commutes are supposed to clue us in: Scarborough stands in the prow of a small boat crossing the Hudson, à la Washington crossing the Delaware, as if he’s invading New York to bring some red-state virtue to Sin City. The guys—Mike Barnicle, Willie Geist, Mark Halperin, John Heilemann, Donnie Deutsch, Steve Rattner, Dan Senor, et al. (Tina Brown is one of only two women; Al Sharpton’s the sole black person)—arrive together on the subway, like working-class stiffs, setting them apart and below the more individualistic Joe.

Mika and the boys humor Joe, and themselves, that he’s only kidding. But hoping you’re not going to be flushed down the can isn’t the same thing as love.