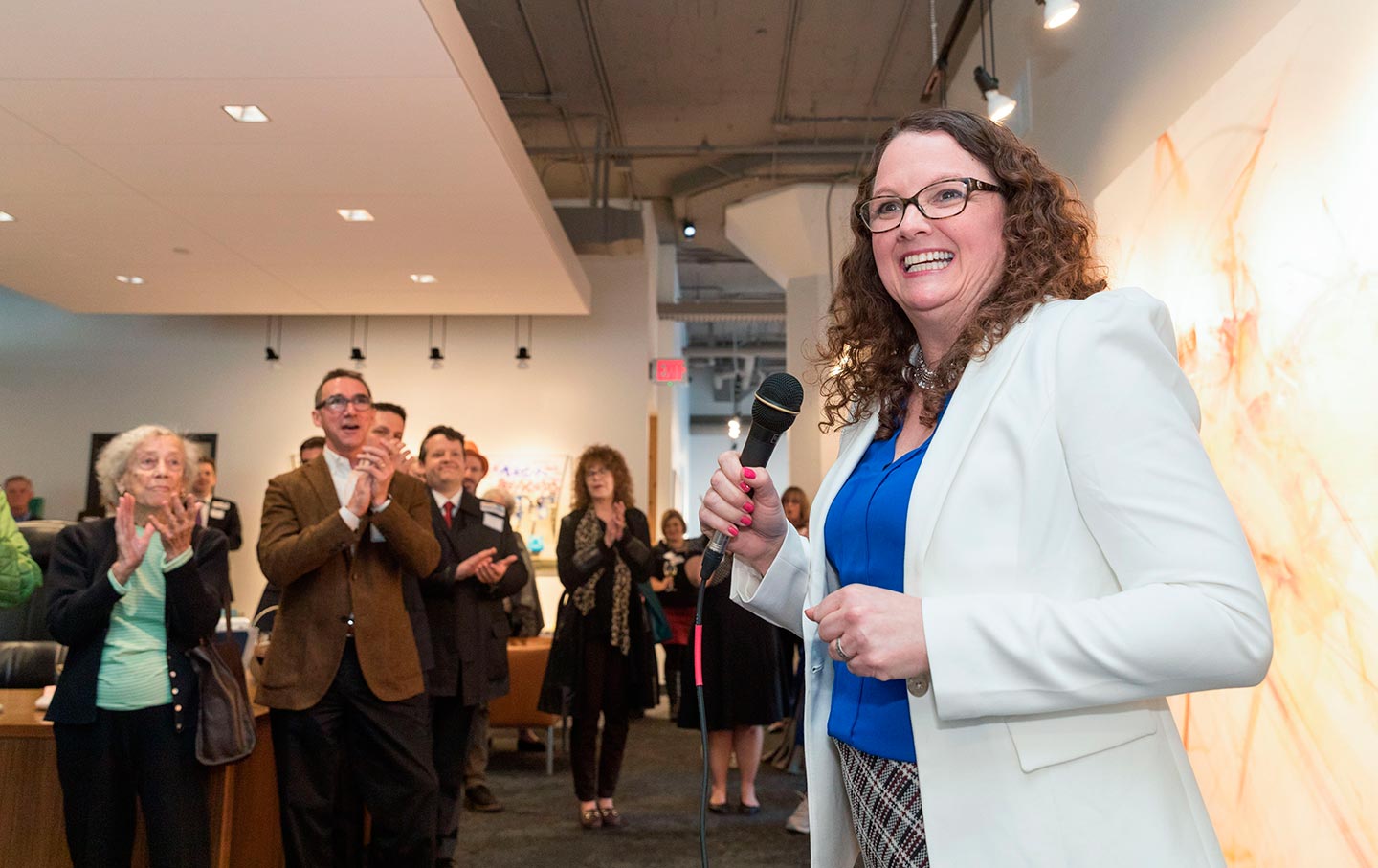 On May 15, Democrats in Nebraska’s Second Congressional District will have a real choice to make. Brad Ashford, 68, is a longtime politician, with many years in the State Legislature and one term in Congress (2013–15). He’s been a Republican, an independent, and a Democrat, with positions supporters would call moderate and judicious and opponents would call inconsistent, mushy, too conservative, or just plain confusing. Kara Eastman, 45, is a social worker who runs a nonprofit, the Omaha Healthy Kids Alliance, which seeks to make sure that children live in homes free of pollutants like mold and lead. She also sits on the board of Metropolitan Community College. And she more than held her own when the two candidates debated. Eastman came across as knowledgeable, energetic, outgoing, and—that quality so crucial for women and so unimportant for men—likable. (I should mention that I’m a supporter and have donated to her campaign.) Ashford, on the other hand, struck me as somewhere between laid-back and low-key.

Eastman, who supported Hillary Clinton in 2016, has a platform much like that of Bernie Sanders: Medicare for All, free college for families making under $150,000, free community college, raising the minimum wage, no Keystone XL pipeline, and no deportation of DACA immigrants.

During his one term in Congress, Ashford generally voted with the Democrats, although The Washington Post rated him the third most likely House Democrat to buck the party, siding with Republicans over 20 percent of the time. That’s a lot of important votes! Ashford supported the Keystone pipeline, for example, voted to roll back Wall Street regulations, and voted to ease requirements on employers for health-insurance coverage. Given his record, progressives are outraged that the DCCC is supporting him over Eastman, putting him on its list of “Red to Blue” candidates—part of a pattern, they say, of favoring centrist candidates over more progressive ones.

At The Intercept, Lee Fang chastised Emily’s List, the Planned Parenthood Action Fund (PPAF), and NARAL for staying out of the race: “A pro-choice woman is running against a male Democrat who voted to restrict abortion. Why are women’s groups silent?”

Fang was a little unfair: True, while in the State Legislature, Ashford was a registered Republican, and was anti-choice. He frequently cast the same votes as Democrat Heath Mello, the energetic, anti-choice Catholic whom pro-choice groups attacked when he ran for mayor of Omaha last year. But in Congress, as a Democrat, Ashford had a perfect pro-choice record. “We worked with him,” NARAL head Ilyse Hogue told me when we spoke by phone, “and he voted right every time…. His votes prove he’s changed since the ’90s.” Although, with a couple of exceptions, Ashford voted anti-choice consistently through 2011.

“We have to believe in change and evolution. I think he’s absolutely sincere.” Of Eastman, Hogue said, “We love that she’s taken a strong stand, but she has no voting record.” Since both candidates are pro-choice, “there’s no compelling reason for us to support her” over him.

In Congress, Ashford got a rating of 100 percent from Planned Parenthood, so that explains why PPAF has stayed out of the race. “We wish we were able to get into every primary,” press secretary Andrew Taverrite e-mailed me, “but both candidates here have been clear in their support for reproductive rights.”

Emily’s List is another matter, since its brief is specifically to support pro-choice Democratic women. You would think Eastman would be right up its street. The group has been criticized for failing to support progressives before, sticking with safe, well-funded candidates instead. It was late to join Marie Newman’s primary campaign against anti-choice conservative Democrat Dan Lipinski, for example. If they ever return several phone calls, I’ll let you know what they say.

I asked Eastman about the non-endorsements when I interviewed her by phone. “It’s hard to know what happened there,” she said. “We were in regular contact with Emily’s List, but then that stopped. They kept giving us arbitrary fundraising benchmarks, and we kept meeting them. But I can’t control what they do. I’ve just been myself.”

All these groups have arguments on their side. If NARAL and Planned Parenthood dropped politicians they’ve persuaded to vote their way just because a more attractive candidate came along, they would lose their leverage. All single-issue groups work this way. As for Emily’s List, it can’t support everyone. It has to make judgment calls about electability and fund-raising. They were right about Marie Newman, after all: She lost. (But maybe she would have won had they had the gumption to get involved.) Ashford has raised more money than Eastman overall (not recently though); he has more experience; he’s been around forever.

All that said, though, I think Eastman deserved these groups’ support. She is by far the better candidate. Even on reproductive rights, she is the more outspoken, with the longer—much longer—record of commitment. As for electability, she may have less money, but she has more ardor. Besides, we’re in an extraordinary moment. The Resistance is real. Progressives, pro-choicers, women, and young people are on fire. Women candidates are winning a staggering number of races, as my colleague Joan Walsh points out. If ever there was a moment not to be cautious, it is now.

The following interview with Eastman has been lightly edited for clarity.

Pollitt: NE-2 is a pretty Republican district, isn’t it, even though it includes the city of Omaha? What makes you think it is ready for a very liberal candidate like you?

Eastman: It’s not as Republican as you might think. There are about 150,000 registered Democrats, 160,000 Republicans, and 100,000 independents. The platform that I’m running on—health care, reducing student debt, commonsense gun control, and environmental protections—is not liberal or conservative. These are the issues that voters in the district are telling me are most important to them.

Pollitt: You take an uncompromising stand in favor of abortion rights. You even did a TV spot about abortion rights, which is not something many politicians would do.

Pollitt: What are your biggest differences with Brad Ashford?

Eastman: Mr. Ashford was a Republican for 38 years. I’m a lifelong Democrat, but I’m not tied to a party because I’m a political outsider. I stand by my convictions and have been fighting for regular people over corporations and the wealthy my whole career. I always have been pro-choice, against the Keystone Pipeline, in favor of DACA, and a supporter of environmental regulations like Obama’s Clean Power Plan, all positions that separate me from his voting record in Congress. These votes weren’t popular with Democrats in this district, and that’s part of the reason I decided I had to run.

Pollitt: You’re a social worker and you run a nonprofit. How do you respond to people who say you lack political experience?

Eastman: Working here in Omaha as CEO of my nonprofit, Omaha Healthy Kids Alliance, I’ve raised over $13 million to invest in healthy environments for kids, to embark on public-private partnerships, and to address some of our community’s greatest needs—because we live in the nation’s largest residential Superfund site. Lead poisoning has been, and still is, a serious public-health threat. My organization has directly served thousands of families since 2006. I’ve even fought the EPA and challenged the Metropolitan Utilities District on how to spend money here in Nebraska and how to create best practices at the local level. I can honestly say that my job has fundamentally been about good government, and I bring people from all sides of the political divide together to find consensus around incredibly important health-related, environmental, and educational issues.

I’m proud to say I’ve gotten things done in Congress without being in Congress. I worked with Republican Senator Mike Johanns on the Healthy Housing Council Act. And I’m an elected member of the Board of Governors (Trustees) of Metro Community College, where I now serve as vice chair.

Pollitt: You call yourself “progressive yet pragmatic” and “a fiscal conservative.” But you also call for lots of spending on infrastructure, free public college for families earning under $125,000 (which is almost everyone), free community college, publicly funded political campaigns, paying down the $20 trillion national debt, and Medicare for All. Where is the money going to come from?

Eastman: The Republican tax bill put us further in debt—how are we going to pay for that? Now they’re talking about cuts to things like CHIP to pay for tax cuts for the wealthy. I really think this is unacceptable and immoral. With a new Congress and president, we need to flip the tax plan, force corporations to pay their fair share, raise the top tax rate, and add a small financial-transactions tax. Along with a modest capital-gains increase, that could raise over $200 billion a year; these reforms could generate hundreds of billions to draw down the debt and continue to fund critical programs.

Pollitt: You’ve said you feel a real sense of desperation about our country from many people you’ve talked with when you go door to door. What is that about?

Eastman: People are afraid for our national security, concerned about the growing debt and the potential for cuts to programs on which they rely to survive. They’re worried about free and fair elections and about the state of our democracy in general. I talk to women, members of the LGBTQIA community, immigrants, people of color—they tell me they’re scared to live in this country under this kind of leadership in Washington.

Pollitt: How is the campaign going?

Eastman: I’m feeling the increasing momentum every day, especially because we’re so close to the primary on May 15. In the last five weeks, we’ve outraised my primary opponent by 50 percent, and we have dozens and dozens of volunteers canvassing, making calls, and spreading the word about our campaign every day. The majority of people at the doors now recognize me—TV does help!—and they commit to voting for me. I’m proud of the campaign we’ve built; it feels more like a grassroots movement than anything else. I know that from experience—this is just different.

Correction: An earlier version of this piece stated that Eastman supported Bernie Sanders in the Democratic presidential primary. In fact, she supported Hillary Clinton. The piece also stated that this congressional race was Eastman’s first run for elected office. In fact, her position on the board of the Metropolitan Community College is an elected role.