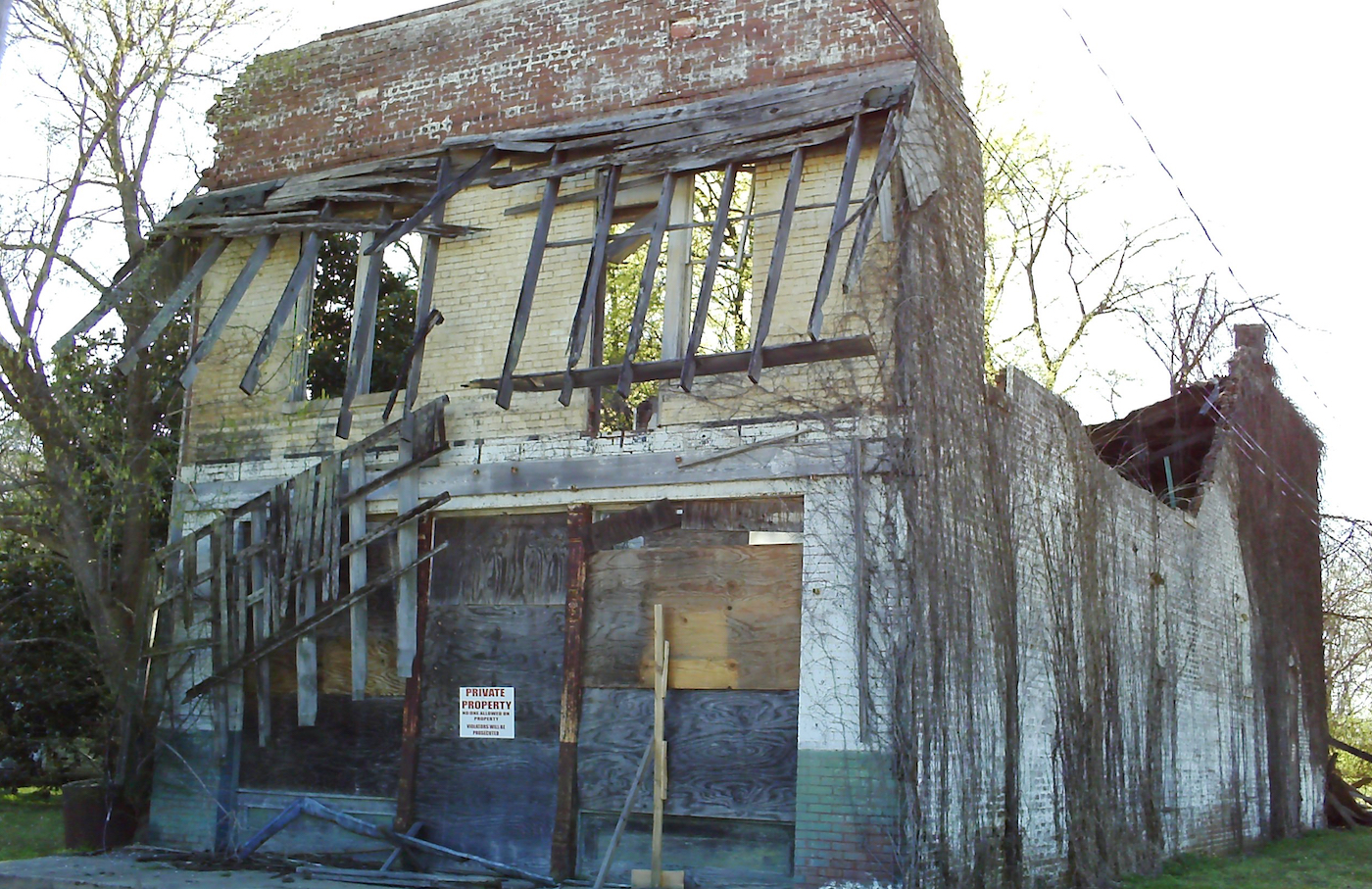 The former site of Bryant’s Grocery in Sumner, Mississippi, where Emmett Till went to buy candy on August 28, 1955. (Wikimedia Commons)

In August 1955, a 14-year-old black boy from Chicago was tortured and killed for allegedly whistling at a white woman. His body was found in the Tallahatchie River with a 70-pound cotton gin fan tied around his neck with barbed wire. Less than one month later the two white men responsible were found “not guilty” by an all-white jury in Sumner, Mississippi. But the case has never died. Emmett Till lives on, and the town in which he was killed is now a tourist attraction.1

The courthouse in the town square where the trial took place is on the National Register of Historic Places, renovated at a cost of $3 million. Across the street, visitors can enter the Emmett Till Interpretive Center, and if they drive south from Sumner on the Emmett Till Memorial Highway they will pass the Emmett Till Multipurpose Complex, a community center, and further on they will see a sign for the Emmett Till Historic Intrepid Center (ETHIC), which occupies an old cotton gin (a cotton gin fan was tied to Till’s neck so his body would quickly sink after the murderers dumped his body in the Tallahatchie River); across the railroad tracks from the cotton gin, tourists can walk through a 20-acre park and nature trail devoted to Till’s memory. A brochure created by the Emmett Till Memorial Commission offers a self-guided “civil rights driving tour,” with directions to 12 nearby locations relevant to the Till case.2

For those who are not inclined to spend their vacation sightseeing in the Mississippi Delta, there are three movies on Emmett Till in the works, one to be directed by Whoopi Goldberg. Perhaps the most compelling as well as comprehensive account of the murder, the trial, and all that followed is the newly published Emmett Till: The Murder That Shocked the World and Propelled the Civil Rights Movement, by Devery S. Anderson (University Press of Mississippi, 2015).3

Anderson called me several years ago while doing research for the book. “I’m sure you get a lot of calls and e-mails about this,” he apologized, “and I’m sorry to bother you, but you are the only one who was at the trial who is still alive.” I was 23 when I went to the Mississippi Delta and covered the trial for The Nation. I had no idea that the story would become so relevant again more than sixty years later. Nor did I imagine that racism was so ingrained in American history and culture it would still be just as prevalent—and in fact, openly flourishing, not just in the South but throughout the country, with no end in sight.4

The Till trial was the first major “race” story after the Brown v. Board of Education decision banning segregation in public schools, and reporters from all over the world came to see it. The trial lasted one week, and it only took the all-white jury an hour and seven minutes to deliver the “not guilty” verdict that had always been a foregone conclusion. The final lawyer who spoke for the defense summed up his case by announcing his faith that “every last Anglo-Saxon one of you men in this jury has the courage to free these men.”5

A crowd was gathered on the lawn outside the courthouse during the trial, and the crowd itself was segregated. There was a Princeton student from Mississippi who sought to defend his state from the negative attention it was getting in the press. He said the image of Mississippi as an exotic place that seemed full of bizarre characters and dark doings was merely fictional, expressed in the imaginative writing of William Faulkner, who was born and lived most of his life in the nearby town of Oxford. Lowering his voice, as if to explain the reason for what he felt was the novelist’s distorted vision, the student said, “Mr. Faulkner, he drinks a good deal.”6

I wasn’t aware at the time that the Princeton man may have been referring not only to Faulkner’s fiction but also to an editorial the author had written from Rome the week before the trial. In the piece, Faulkner had pointed out that the white race composed only a fourth of the world’s population and the world would not continue to tolerate America’s abuse of its minorities. The Nobel Prize winner concluded, “if we in America have reached that point in our desperate culture when we must murder children, no matter for what reasons or for what color, we do not deserve to survive and probably won’t.”7

By those standards, our odds today do not look good.8

Land of the Free? This Firsthand Report From the Emmett Till Murder Trial Is Chilling to Read Today

Who Killed Emmett Till?

If anything, we seem to have regressed. As police shootings of black men have become more commonplace (or at least more unignorable, since citizens carry cameras on their phones), we have to be reminded that “black lives matter,” and even that simple truth can be regarded as “controversial,” countered with shouts of “All lives matter,” a team cheer for the newly empowered white nationalists. I fear that a large number of my fellow white folks still don’t accept that we will soon be a minority in this country—or they believe they can stave off that reality. In his 1953 essay “Stranger in the Village,” James Baldwin observed: “American white men still nourish the illusion that there is some means of recovering the European innocence, of returning to a state in which black men do not exist.” That seems even more applicable to the Trumpian world of today.9

With every jury that finds the real killer of a black man or woman “not guilty”—no matter what the color of the killer’s skin or uniform may be—the shame of the Emmett Till murder trial is repeated, like a national nightmare from which we seem unable to awake.10