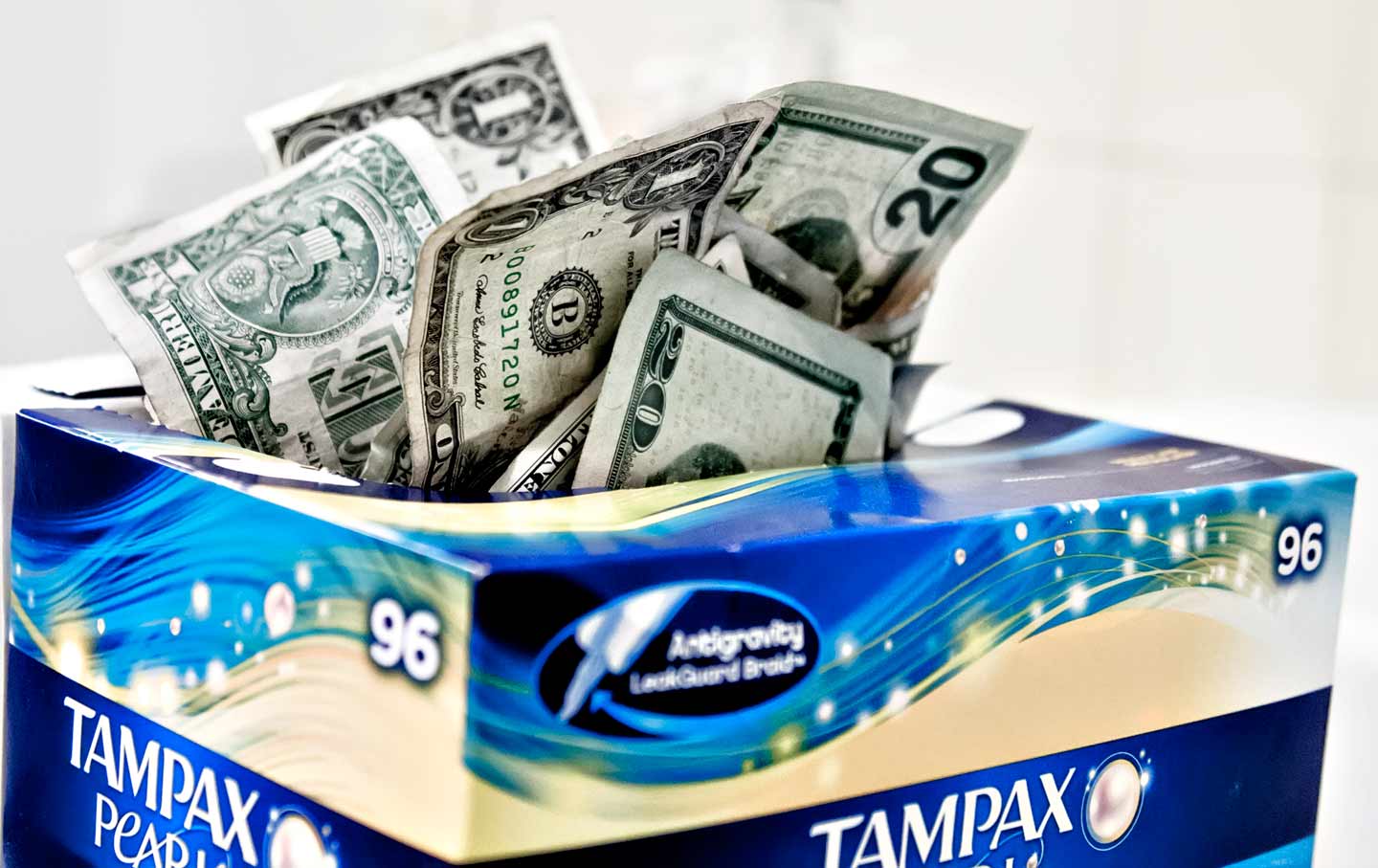 Recently, during a live interview with YouTube star Ingrid Nilsen, President Obama was asked why 40 states impose a sales tax on tampons and sanitary pads. His telling, if not slightly awkward, response: “I suspect it’s because men were making the laws.”

President Obama confessed that prior to the question he was unaware of the fact that most states don’t exempt tampons and pads from sales tax or otherwise classify them as a necessity. But other global leaders, British Prime Minister David Cameron and French Prime Minister Manuel Valls among them, have been engulfed in an ongoing battle over the “tampon tax”—the EU’s Value Added Tax classifies tampons as “non-essential luxury items”—as raucous floor debates, failed votes, and viral protests have unfolded in recent months. The economics of menstruation began making international headlines last summer when Canada succeeded in eliminating its national Goods and Services Tax on menstrual products.

In the United States, too, activists are calling out the clueless sales tax. Generally, states exempt food and other necessities, such as medicine and prescription drugs, but not menstrual products, from sales tax. A change.org petition to US state legislators, Stop Taxing Our Periods. Period. (which I launched, together with Cosmopolitan magazine), has amassed more than 43,000 signatures. In January, California Assemblymembers Cristina Garcia and Ling Ling Chang introduced the first tampon-tax bill of the 2016 legislative session, with notable bipartisan support. California collects over $20 million annually in sales taxes on tampons and pads. Women across the country pay upward of $70–100 per year on these products—and low-income women who can’t afford to buy in bulk often pay a premium for emergency, convenience-shop purchases—which amounts to more than $3,000 over a lifetime of menstruating years.

The New York Times Upshot recently took on the tampon tax, parsing out nitty-gritty details of sales-tax policy across the states. As the Upshot points out, lack of consistent classification of medical necessities from state to state has resulted in a complicated maze of laws. And the line where “toiletries end and medication begins” is not always obvious. But the Times concluded: “One advantage of keeping the sales tax on tampons is that people will buy them whether the economy is good or bad—which is more or less exactly the same reason to exempt them from tax in the first place.”

Menstruation simply is different from other hygiene needs.

Most disagreement comes down to this—the predictable question that (mostly) men ask: If other necessities are taxed—soap, Band-Aids, toilet paper—why do tampons deserve special treatment? Anyone who has ever had a period (mostly women) knows that one can make do without a bar of soap, that bandages can be improvised and that there’s toilet paper aplenty in public restrooms. Women who don’t have access to menstrual products are prone to reproductive infection, not to mention humiliation. Menstruation simply is different—there is no analogous hygiene need. Period.

President Obama called out the crux of the problem. When women aren’t represented in the nation’s leadership, or present in halls of government where decisions are made, our needs are disregarded, marginalized—even mocked. It was just a few short months ago when Donald Trump, angry at the questions he was getting in the first Republican debate, said that moderator Megyn Kelly had “blood coming out of her eyes, blood coming out of her wherever.” When the tax issue was debated in British Parliament, Tory MP Bill Cash wouldn’t even utter the word tampon, until ceremoniously called out by Labour MP Stella Creasy.

MP Creasy’s speech struck a chord: “Tampons and sanitary towels, even I’m struggling with the words tonight it seems, have always been considered a luxury. That isn’t by accident, that’s by design of an unequal society, in which the concerns of women are not treated as equally as the concerns of men.” And now President Obama has echoed the same, suggesting that women should not be penalized simply because they are women.

As a matter of policy, the president’s suggestion that women organize state by state on the sales tax issue—which is already beginning—only scratches the surface. Activists from New York City to Atlanta to Los Angeles are mobilizing around menstrual health; creative donation drives are gaining popularity, such as Distributing Dignity, RACKET, Support the Girls and Girls Helping Girls. Period.; hashtag campaigns like #TheHomelessPeriod, #FreeTheTampons, and #JustATampon have gone viral.

In addition to state reform and community and online activism, reform at the federal level is vital. Mandating the inclusion of feminine-hygiene products in Flexible Spending Accounts—through which people can place up to $2,550 of their pre-tax income in a account dedicated for certain medical expenses—is one example. At present these items are ineligible because of misguided classification by the IRS. Congresswoman Grace Meng has introduced a bill that would rectify this. Representative Meng also recently convinced the Emergency Food and Shelter National Board Program, administered by FEMA, to allow homeless shelters to purchase feminine-hygiene products with grant funds. (Prior to her recommendation, toothpaste was an eligible expense, but not tampons.)

Menstrual health is an issue of educational equity, too. In practical terms, the inability to access hygiene products can affect girls’ attendance at and productivity in school. A problem that long has been documented in developing countries—in Sierra Leone, more than a fifth of girls miss school because of their periods; in Afghanistan and Nepal, three in 10 girls do—many are shocked to learn this isn’t just a third-world occurrence. New York City, under the leadership of Council Member Julissa Ferreras-Copeland, is poised to introduce legislation to provide free tampons and pads in all of the city’s public schools, after holding teen focus groups and piloting a project this year. And a bill has been introduced in Wisconsin by Representative Melissa Sargent that would make these products free in all public schools (and correctional facilities) statewide. More cities and states should follow their lead.

While the prevalence of the tampon tax was news to President Obama, numerous activists and lawmakers have been making waves for menstrual equity over the past year—so much so that Cosmopolitan dubbed 2015 “The Year The Period Went Public” and NPR called it “The Year of the Period.” It took a bold YouTuber to prompt the leader of the Free World to discuss tampons and acknowledge menstruation as a matter of legitimate policy reform. That is progress. So too is the president’s refreshing openness about what is at stake when women—our voices, our experiences—are under-represented in government.