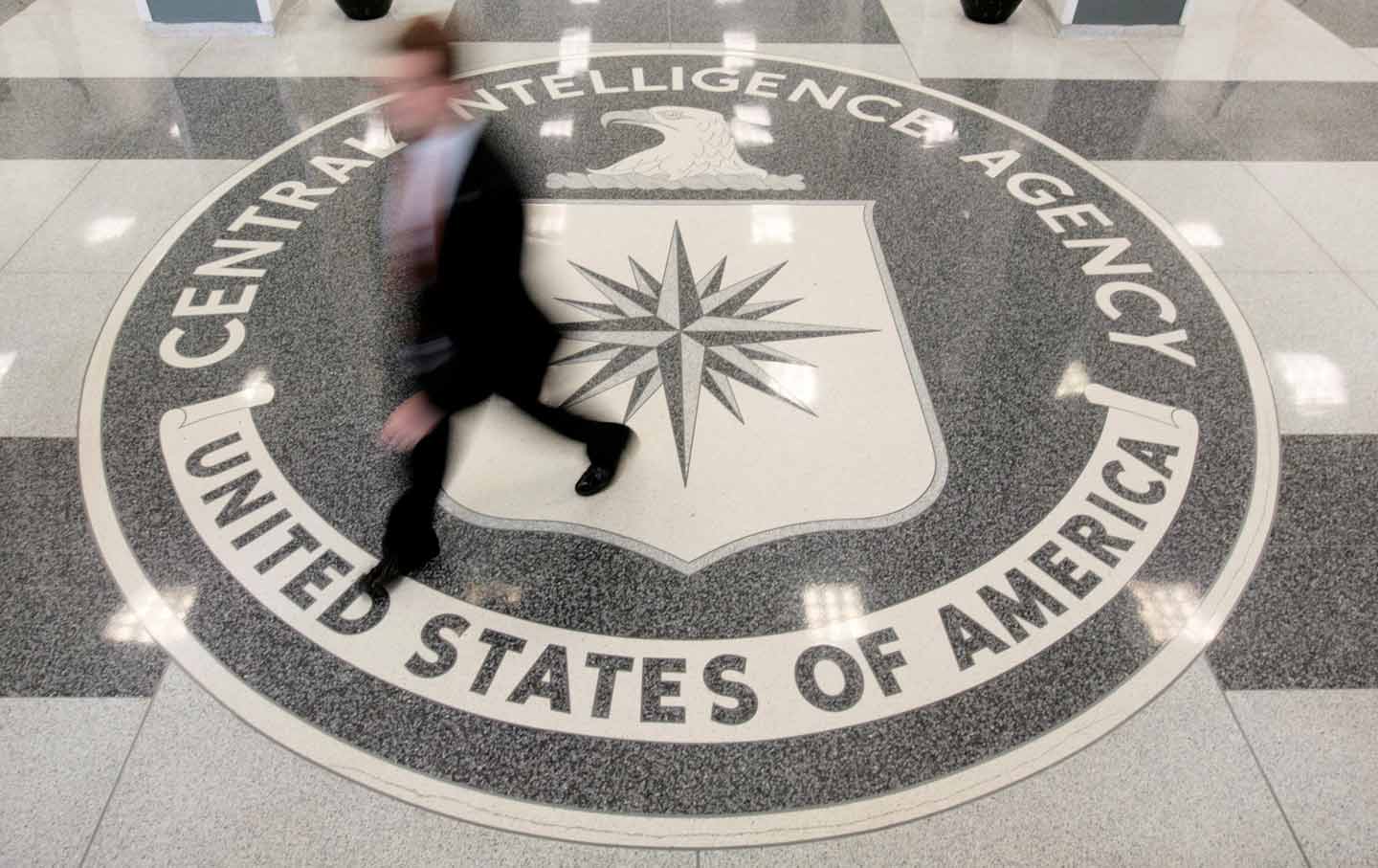 The lobby of the CIA Headquarters Building in Langley, Virginia. (Reuters / Larry Downing)

In 1977, Carl Bernstein published an exposé of a CIA program known as Operation Mockingbird, a covert program involving, according to Bernstein, “more than 400 American journalists who in the past 25 years have secretly carried out assignments for the Central Intelligence Agency.” Bernstein found that in “many instances” CIA documents revealed that “journalists were engaged to perform tasks for the CIA with the consent of the managements of America’s leading news organizations.”

Fast-forward to December 2016, and one can see that there isn’t much need for a covert government program these days. The recent raft of unverified, anonymously sourced and circumstantial stories alleging that the Russian government interfered in the US presidential election with the aim of electing Republican Donald J. Trump shows that today too much of the media is all too happy to do overtly what the CIA had once paid it to do covertly: regurgitate the claims of the spy agency and attack the credibility of those who question it.

On Friday, December 9, The Washington Post, fresh from publishing a front-page story that promoted a McCarthyite blacklist, published a piece that claimed that the CIA “concluded in a secret assessment that Russia intervened in the 2016 election to help Donald Trump win the presidency.” The Post also claimed that “Intelligence agencies have identified individuals with connections to the Russian government who provided WikiLeaks with thousands of hacked e-mails,” including those of John Podesta.

That same day, The New York Times reported that “the Russians hacked the Republican National Committee’s computer systems in addition to their attacks on Democratic organizations, but did not release whatever information they gleaned from the Republican networks.” The implication being that the Russians released the DNC e-mails to hurt Clinton, but held off on releasing the RNC e-mails in order to protect Trump.

The bombshell reports—and Trump’s quick dismissal of them as “ridiculous”—have dominated the news cycle in the days since their publication.

And while the battle between Trump and the CIA continues to play out publicly, there remains the very real need for the public disclosure of as much evidence as possible, given the severe ramifications a successful foreign intervention in a US election would have on American democracy.

While Trump’s sin in committing an act of lèse majesté against the CIA has been treated as a grave transgression in the eyes of the media, serious questions remain over the veracity of the CIA’s finding. After all, several aspects of the Times and Post reports that actually undermine the dominant narrative of “Russian interference” are often carefully cropped out of the mainstream media’s portrayal of the controversy.

For example, The Washington Post noted, almost as an aside, that “intelligence agencies do not have specific intelligence showing officials in the Kremlin ‘directing’ the identified individuals to pass the Democratic emails to WikiLeaks,” while the Times reported that the RNC had “issued a statement denying that it had been hacked.” Indeed, the FBI has yet to make a determination on whether the RNC was hacked, something that the RNC itself denies.

The lack of clarity over whether or not the Russian government hacked the RNC is a critical part of the story, since the CIA’s “secret assessment” that alleged that the Russians interfered in the election in order to elect Trump was, according to a US official who spoke to Reuters this week, “based on the fact that Russian entities hacked both Democrats and Republicans and only the Democratic information was leaked.”

Meanwhile, much of the media has ignored the rather salient fact that the FBI is by no means in agreement with the anonymous and secret CIA assessment that Russia interfered with the election in order to help elect Donald Trump.

Nor, for that matter, is the Office of the Director for National Intelligence (ODNI), which has declined to endorse the CIA report. This is perhaps less surprising than it first might seem, considering that as recently as November 17 ODNI Director James Clapper testified before the House Intelligence Committee and acknowledged that “as far as the WikiLeaks connection, the evidence there is not as strong and we don’t have good insight into the sequencing of the releases or when the data may have been provided.”

Indeed, evidence of a connection between the Russian government and the hackers that are believed to have stolen the DNC/John Podesta e-mails remains illusory. Cyber-security expert Jeffrey Carr has observed that “there is ZERO technical evidence to connect those Russian-speaking hackers to the GRU, FSB, SVR, or any other Russian government department.” The very real possibility that non-state actors carried out the hack of the DNC has been conspicuously absent from the mainstream narrative of “Russian interference.”

And so, while the Russian government certainly could have been behind the DNC/Podesta e-mail hack, the possibility that it originated elsewhere should not be so easily dismissed. After all, Wikileaks founder Julian Assange has repeatedly denied that Russia was the source of the DNC/Podesta emails, while a former British ambassador who is close to Assange has said the source of the e-mails is “an insider. It’s a leak, not a hack.”

But that hasn’t prevented the media from treating the anonymous, unverified claims of both The Washington Post and The New York Times, both based on a CIA “secret assessment,” as gospel.

Media Rushes to Defend The CIA

Last weekend, the influential Sunday morning talk shows took Trump to task for his dismissal of the CIA’s “secret assessment.” An incredulous George Stephanopoulos asked incoming White House Chief of Staff Reince Priebus: “How is a President Trump going to work with intelligence agencies if he doesn’t trust their work?”

“I want to know,” Stephanopoulos demanded, “why President-elect Trump doesn’t believe the conclusions of 17 intelligence agencies.”

On Face the Nation, Time magazine’s Michael Duffy said the CIA’s finding was “deeply disturbing” because “it means that Russia attacked the United States.” Duffy also expressed “shock” that Trump has “drawn a fairly dark cloud over his relationship with the intelligence community on whom he will rely and need as president.”

And over at NBC’s Meet the Press, moderator Chuck Todd warned viewers that the issue of Russian interference “is not about the results of the election, it’s about a hostile foreign government trying to influence our election.” Todd thought it “remarkable” that Donald Trump decided “to side with a foreign government over our own chief intelligence agency.”

“Donald Trump,” he concluded, has “declared war on the intelligence community.”

The respected liberal columnist E.J. Dionne also sprung to the defense of the CIA’s honor in his column for The Washington Post on Monday. “When The Post revealed the CIA’s conclusions about Russia,” Dionne opined, “Trump’s response was to insult the CIA.” Still more alarming to Dionne, is that Trump would have the audacity to “happily trash our own CIA.”

Meanwhile, on Tuesday, December 13, liberal stalwart Keith Olbermann went much further. In a commentary for GQ he warned that “the nation and all of our freedoms hang by a thread. And the military apparatus of this country is about to be handed over to scum who are beholden to scum, Russian scum.” He then tweeted his considered belief that “If @realDonaldTrump will ignore CIA to listen instead to Russians, it’s treason.”

The working assumption here seems to be that the job of the president (and apparently of media outlets like CNN and The Washington Post) is to stand, salute, and never question Langley.

In Langley We Trust?

The high-profile anchors and analysts on CNN, CBS, ABC, and NBC who have cited the work of The Washington Post and The New York Times seem to have come down with a bad case of historical amnesia.

The CIA, in their telling, is a bulwark of American democracy, not a largely unaccountable, out-of-control behemoth that has often sought to subvert press freedom at home and undermine democratic norms abroad.

The columnists, anchors, and commentators who rushed to condemn Trump for not showing due deference to the CIA seem to be unaware that, throughout its history, the agency has been the target of far more astute and credible critics than the president-elect.

In his memoir Present at the Creation, Truman’s Secretary of State Dean Acheson wrote that about the CIA, “I had the gravest forebodings.” Acheson wrote that he had “warned the President that as set up neither he, the National Security Council, nor anyone else would be in a position to know what it was doing or to control it.”

Following the Bay of Pigs fiasco, President John F. Kennedy expressed his desire to “to splinter the CIA into a thousand pieces and scatter it to the winds.”

The late New York Senator Daniel Patrick Moynihan twice introduced bills, in 1991 and 1995, to abolish the agency and move its functions to the State Department which, as the journalist John Judis has observed, “is what Acheson and his predecessor, George Marshall, had advocated.”

A democracy, it is true, cannot function if its elections are the target of outside powers which seek to influence it. To see what a corrosive effect outside powers can have on democratic processes, one need look no further than the 1996 Russian presidential election, in which Americans like the regime-change theorist Michael McFaul (who was later to become US Ambassador to Russia from 2012–14) interfered in order to keep the widely unpopular Boris Yeltsin in power against the wishes of the Russian people.

Perhaps if it was doing the job of intelligence gathering rather than obsessively plotting regime change, the CIA would have amassed a record worthy of the establishment media’s incessant fawning.

But alas. Consulting the CIA’s historical record, one is confronted by a laundry list of failures, which includes missing both the break-up of the Soviet Union (during the 1980’s a CIA deputy director by the name of Bob Gates called the USSR “a despotism that works”) and the 9/11 attacks.

More recently, CIA Director John Brennan made false statements before Congress over the CIA’s hacking into the computers of Congressional staffers.

And yet, despite its uninspiring record of the past 70 years, the media has driven itself into a self-righteous frenzy over what it perceives to be President-elect Trump’s grave show of disrespect to the CIA.