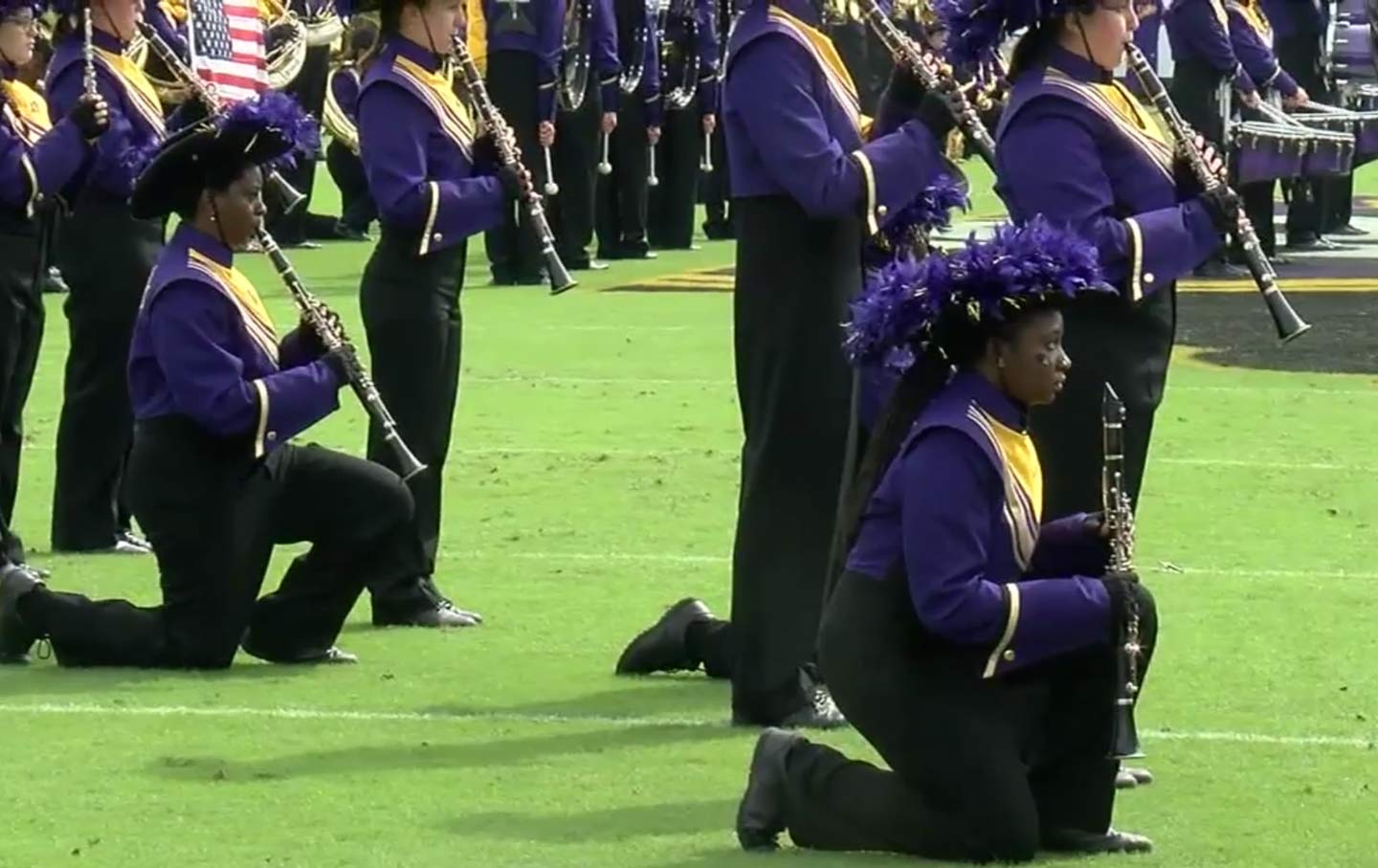 Members of the East Carolina University Marching Pirates kneel during “The Star-Spangled Banner” on October 1, 2016, in Greenville, North Carolina. (Courtesy of WTVD)

On October 1, 19 members of the East Carolina University marching band, black and white, made the decision to take a knee in an anti-racism protest during “The Star Spangled Banner.” Given that they did this in highly conservative Greenville, North Carolina, driving distance from Fort Bragg, their action was by any measure, brave. As Shaun King of the New York Daily News reported, “I have spoken w/ dozens of @EastCarolina students. They are NOT protesting soldiers. The protest is not even anti-war. It’s anti-injustice.”

The band was then vociferously booed when they came out at halftime and has reported receiving threats over social media. Then things got bizarre. The local radio affiliate ESPN Fayetteville refused to broadcast this upcoming weekend’s game, calling its decision “a protest of the protest.”

But this is not actually “a protest of the protest.” If the station organized people to protest the band, or brought them on the air to defend taking a knee, that would be a protest. This is Orwellian erasure enacted by a media conglomerate.

We attempted to find out what was behind the station’s unusual decision. First we contacted ESPN. The World Wide Leader made it explicitly clear that it had nothing to do with this. In an e-mail, Diane Lamb from ESPN PR said, “100.1 FM is an affiliate that carries some ESPN Radio national programming. Local programming decisions, however, are strictly in their purview. Background: ESPN does not own the station.”

So who does own the station? It turns out that it is an organization called—I kid thee not—Colonial Radio Group. Chairman/CEO Jeff Andrulonis said about the situation, “Difficult is the best way to describe it.” There is some money being lost here because of the non-broadcast, but Andrulonis reasoned that the station’s decision serves the FCC’s “public interest” mandate.

One would think that it would be in the “public interest” to not censor a local protest and have this debate in as public a forum as possible. But instead, Andrulonis said, “Local radio is supposed to be reflective of the local area.”

And local thinking, as Andrulonis has decided, is on the side of silence. In a phone call he said the station has received “call after call, e-mail after e-mail, text on text” in support of the decision. He then read several e-mails, including one that said, “Congratulations on your stance. No one has the guts or the patriotism to do what you did,” and another acknowledging the band’s right to protest but also affirming the station’s right to counter-protest. (Again. This is not a counter-protest),

What Andrulonis does not accept responsibility for—and he should—is the fact that the decision by ESPN Fayetteville has deepened and validated the backlash against these young people. First, a professor on campus, Dr. Tracey Tuten—who describes herself on Twitter as an “Ayn Rander” and a “Pirate”—said she would arm herself on campus as a response to the protest, writing, “Since the band members can act on the first amendment without regard to university rules, I too want to act on my second amendment rights to bear arms.” It seems she has reconsidered this position after Interim Police Chief Jason Sugg said, “While I can appreciate Dr. Tuten’s intent to bring attention to constitutional discussions, carrying a handgun on campus property in the manner in which she described is currently prohibited by state law.”

Then four members of the school’s administration threw these young people under the bus, publishing a letter that reads, in part, “We regret the actions taken by 19 members of the East Carolina University Marching Pirates on game day October 1st felt hurtful to many in our Pirate family and disrespectful to our country. We understand and respect this is an issue where emotions are strong.”

For all the talk about college students demanding “safe spaces” from difficult discourses, it is these administrators, professors like the Pirate Dr. Tuten, and CEOs like Jeff Andrulonis howling for a safe space where they don’t have to even entertain the fact that young people at the college do not want to live in a world as unjust and racist as their parents’. Instead of engaging with or even confronting their actions, they have chosen to intimidate band members who dared protest the status quo. They have chosen to shame them. They have chosen erasure. They have chosen to validate every threat raining down on the heads of these young people. But the band members are not alone. They are a link in a chain of protests breaking out at sporting events around the country. That is a community of righteous support the forces of reaction in Greenville could never understand.

[Phuc Pham contributed to the reporting of this piece.]