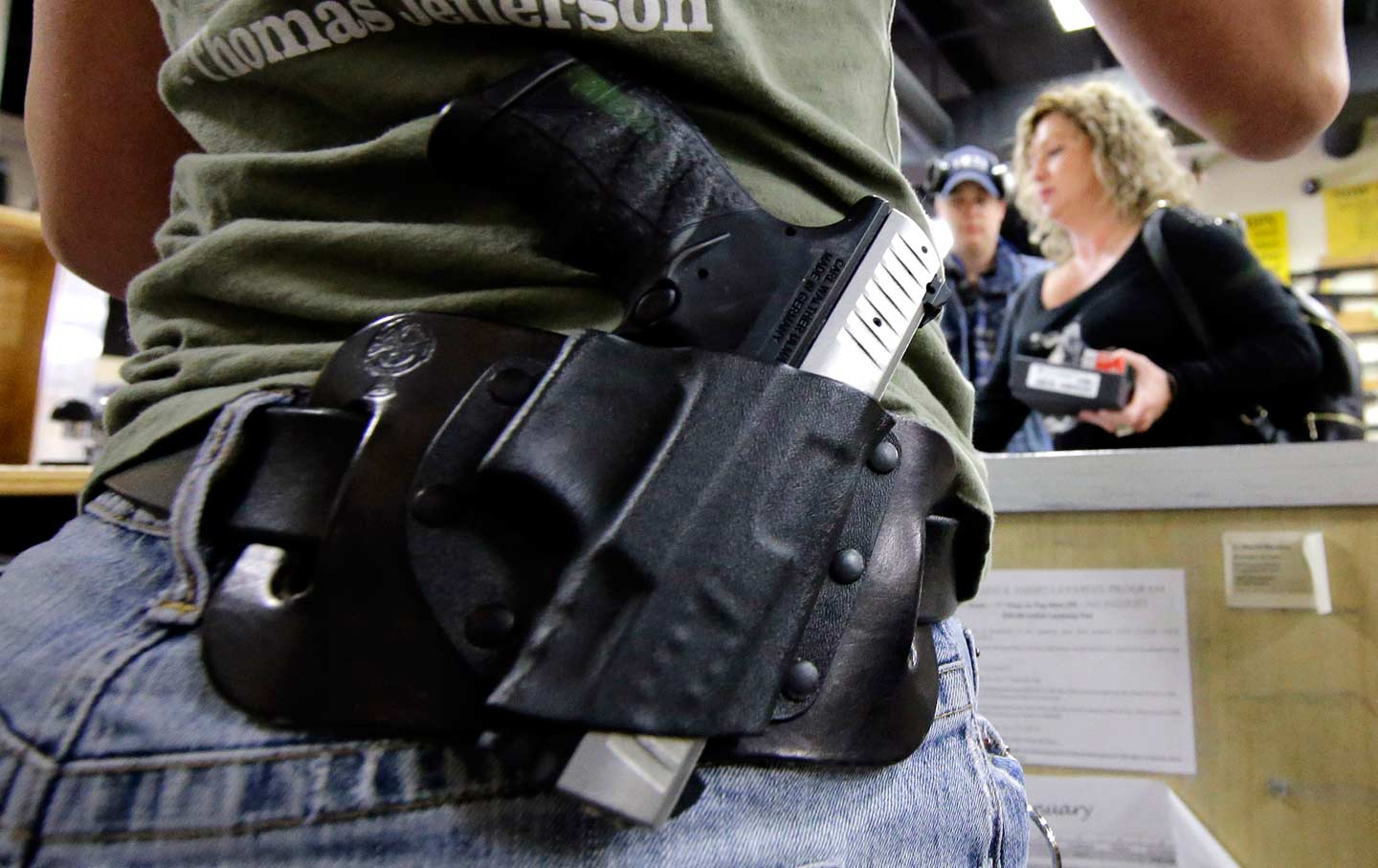 Kayla Brown, left, wears her gun on her hip while working at the Spring Guns and Ammo store in Spring, Texas. (AP Photo / David J. Phillip)

By early June, West Virginians will be able to carry a concealed weapon without a permit, thanks to the state legislature’s successful effort to override Governor Earl Ray Tomblin’s veto of House Bill 4145.

West Virginia is not alone. So-called “permitless carry” is on the wish list of gun-rights groups across the country. A few weeks ago, Idaho Governor Butch Otter signed a bill into law expanding permitless carry in that state. Similar bills have been introduced in more than a dozen other states that would allow citizens to freely carry concealed weapons without permitting or any additional background checks.

There is a bizarre but widespread logic that underpins the push for permitless carry. West Virginia delegate Saira Blair, who wrote the legislation, declared in an op-ed that that “permitless concealed carry bill will enhance safety.” State Senator Charles Trump, a supporter of Blair’s bill, made similar arguments, claiming that “arming of law-abiding West Virginia citizens, without red tape, without enormous expense that deters people from seeking licenses, will make us safer.”

Around the country, other sponsors of similar legislation are singing the same tune. Colorado State Senator Vicki Marbles wrote language into her own permitless carry legislation asserting that “this act is necessary for the immediate preservation of the public peace, health, and safety.”

In New Hampshire, State Senate majority leader Jed Bradley, the primary sponsor of a permitless-carry bill, told New Hampshire Public Radio, “I actually think that if we allow what’s called constitutional carry, in other words without a permit, we’ll be an even safer state than we are today.”

This is plainly not true—social-science research has consistently shown that more guns leads to more gun violence. But these legislators aren’t alone in their belief to the contrary. In a national poll I commissioned, Public Policy Polling found that 61 percent of gun owners believe more guns leads to less crime. (Only 37 percent of non–gun owners and 36 percent of people with guns in their households believe the “more guns, less crime” theory to be true.)

How did this belief become so deeply ingrained, in the face of literally daily evidence in local news reports of damage caused by guns?

One key figure in this ruse is economist John Lott. His book More Guns, Less Crime instantly became a conservative meme after it was first published in 1998.

Lott is part of an industry I call “Lies, Incorporated.” More guns, less crime is just one of numerous lies manufactured with the express purpose of manipulating the public-policy process on behalf of ideological interest groups.

Lies, Incorporated is not an official company or industry. Instead, it is a network of lobbyists, public relations companies, media lackeys, unethical “experts,” and unscrupulous think tanks. Manufacturing favorable data is significant part of the work of Lies, Incorporated. As one corporate lobbyist explained to The New York Times, “Once you have the study, you can point to it to prove your case—even if you paid to get it written.”

This network exists because influencing the political process requires more than mere campaign contributions and lobbying muscle. The National Rifle Association is widely known for excelling at both of these. But elected officials still require the comfort of a lie that allows them to believe they are not pushing bills simply because a favored special interest allows them to. Contributions and lobbying can buy you access, but when you walk into a representative’s office, a study like “more guns, less crime” can provide the impetus for action.

Lott’s argument is simple: “reducing the amount of weapons in our society doesn’t decrease gun violence.” Instead, according to Lott, if states make it easier to carry concealed weapons, violent crime decreases.

With a doctorate in economics from UCLA and prestigious academic appointments at the University of Chicago, Wharton, and Yale, Lott was ideally credentialed to sell this research to the general public. He has since decamped from the potential scrutiny of the academic universe to found his own think tank, the Crime Prevention Research Center.

In the wake of any mass shooting, Lott is the go-to call for television bookers, eager to host his shameless brand of gun-rights advocacy in moments of tragedy. After Sandy Hook, Aurora, and even Columbine, he cried that these tragedies could have been prevented if we only lived in a more heavily armed society: one where the good guys could carry concealed weapons to shoot at the bad guys. A search of Nexis reveals hundreds of citations of Lott by mainstream outlets.

But his theory, no matter how many times it is repeated, is not true—or as a rigorous study published in the Stanford Law Review noted, “the more guns, less crime hypothesis is without credible statistical support.”

Furthermore, a panel of 16 researchers assembled by the National Academy of Science’s National Research Council studied Lott’s theory. Fifteen found there was “no credible evidence” for his theory.

The Johns Hopkins Center for Gun Policy and Research also noted “serious flaws” in John Lott’s work, writing, “The most consistent finding across studies which correct for these flaws is that [Right to Carry] laws are associated with an increase in aggravated assaults.”

Adam Lankford, of the University of Alabama found a correlation between the gun-ownership rate and mass shootings. “What was surprising was how strong the relationship was—no matter what test I ran the data always showed the same thing,” he said.

Lott’s data and honesty have been repeatedly called into question by other academics. In one case, he claimed to have done a survey that found in 98 percent of cases when a weapon is used in self-defense, it was only brandished and not fired. When other academics asked for his data, Lott claimed he lost it as the result of a catastrophic hard drive crash.

Lott conducted the survey again, and of 1,000 respondents only seven people had used a gun in self-defense, six of whom did not fire. This statistically insignificant sample was still good enough for Lott to stand by his conclusion.

In a personally embarrassing moment, Lott was also revealed to have created an online sock puppet, Mary Rosh, who wrote positive Amazon reviews of More Guns, Less Crime exhorting, “Save your life—read this book.” Lott also used Rosh to defend himself against critics, writing messages online purportedly from her. (“YOU ARE AMAZINGLY DISHONEST. HAVE YOU ABSOLUTELY NO SHAME?” read one online comment from “Mary.”)

None of this has damaged his reputation among gun-rights advocates, nor did it stop Lott from appearing on dozens of mainstream-media outlets.

This is the essential function of Lies, Incorporated. Academics with credentialing such as Lott manipulate the media, attempting to force them to tell “both sides of the story.” In this way Lies, Incorporated and the gun industry borrow its playbook from tobacco companies. In fact, Boston University public health professor Michael Siegel draws this same parallel between the firearm and tobacco industry, explaining “the truth about this whole argument about guns being important for defense is one that was essentially manufactured by the gun industry.”

Yet across the country elected officials at every level of government call upon More Guns, Less Crime to provide the thin veneer of statistical support for their predetermined ideological conclusions.

The result is  that more extreme and dangerous gun legislation is proposed every year. Lies do not exist without consequence. The legislation that has been justified by More Guns, Less Crime has a body count.

The scariest part is John Lott is not alone. Researching for my book Lies, Incorporated: The World of Post-Truth Politics, I found that on every issue of consequence debated during the Obama administration, Lies, Incorporated practitioners manufactured evidence, pushed false studies and ultimately distorted the policy-making process on behalf of ideological and moneyed interests.