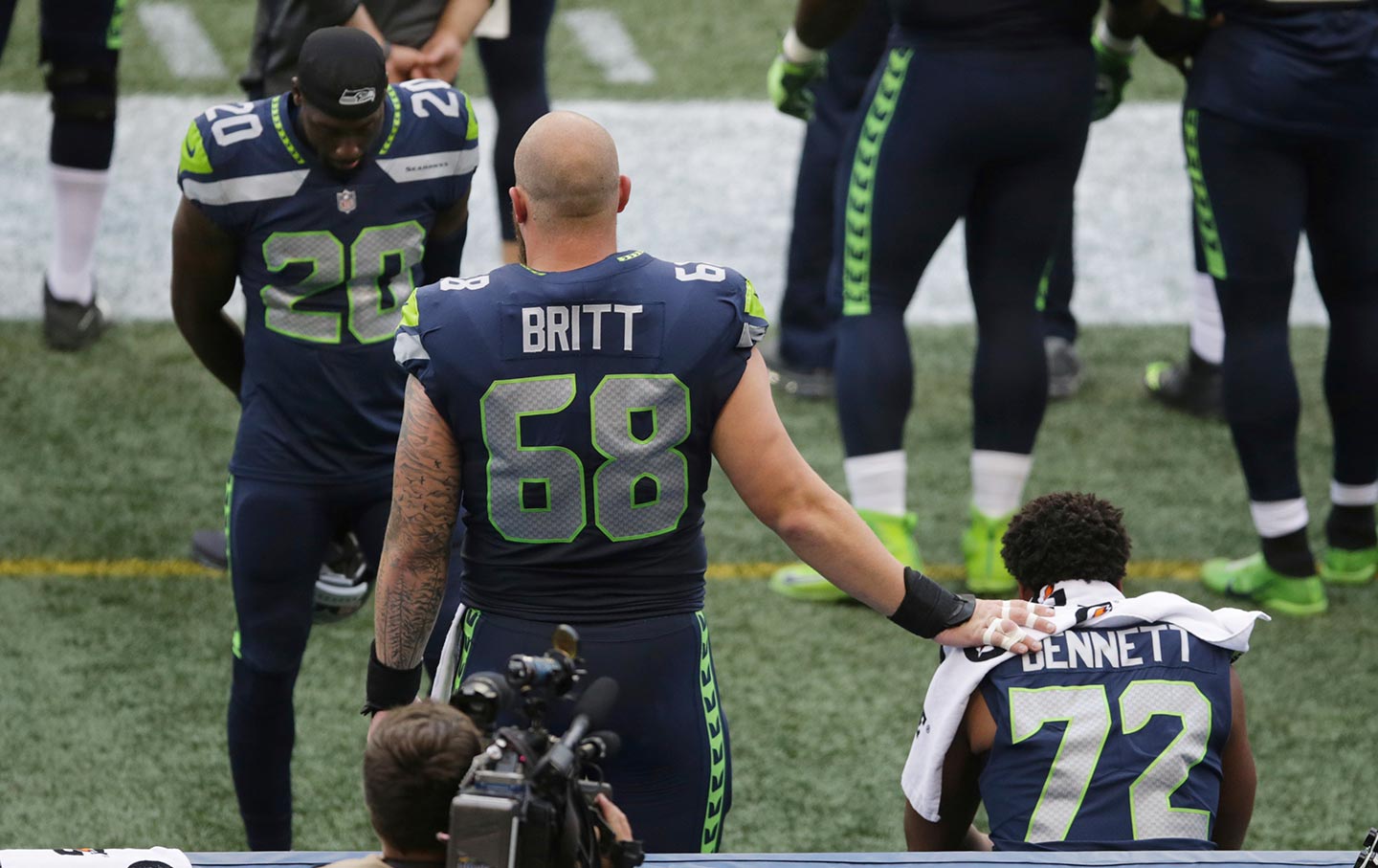 Seattle Seahawks center Justin Britt (68) stands next to defensive end Michael Bennett (72) as he sits on the bench during the national anthem on August 18, 2017, in Seattle. (AP Photo / Scott Eklund)

Twenty sixteen was a banner year for political athletes. Some of the most celebrated people in sports used their hyper-exalted, brought-to-you-by-Cialis platforms to speak out about a crisis-ridden world. But there was also a little-remarked-upon division among athletic truth-tellers: It was the difference between those who were calling for peace and those calling for justice.

Go back and read the statements by LeBron James and friends at the ESPY awards and then read the words of Colin Kaepernick and Megan Rapinoe. There is a difference—it’s the difference between a call for unity and a demand for action. Both demands, especially today, are admirable, but we should recognize the divergence. Similarly, we should recognize the difference between the motivations that are now spurring white NFL players to—at long last!—take part in the anthem protests for justice.

Oakland Raiders quarterback Derek Carr, to much fanfare, put his hand on teammate Khalil Mack’s shoulder on Saturday, who stood during the national anthem. Seattle Seahawk Justin Britt did the same on Friday, alongside the protesting Michael Bennett, who sat during the anthem. Earlier that week, the Eagles’ Chris Long put his hand on teammate Malcolm Jenkins’s shoulder as Jenkins raised his fist. All three moments make for moving photos and memes. But the differences between Carr’s motivations and those of Britt and Long matter.

First and foremost, Mack was not protesting the anthem, as Carr firmly underlined after the game, so to say that Carr was supporting a protest is just factually incorrect. Then there are Carr’s reasons, which come more from the political text of “Ebony and Ivory” than from “No Justice, No Peace.”

“What we wanted to do is show all the kids that look up to me, that look up to him that white kids, black kids, brown kids—blue, green; it doesn’t matter—can all be loving to each other. That’s what me and Khalil are. We’re best friends, and we love one another. The only reason we did that was to unify people and unify the people that look up to us,” Carr said. “Obviously, we see what’s going on in the world. And obviously, everybody pays attention to the national anthem nowadays. We just said, ‘This is the best time to do it while still honoring our country,’ because I love our country more than anything. We’re free to live here and play this game. But we’re also free to show each other that we love one another. That’s the only message we were trying to send.”

That’s well and good, and I’ll always get a little misty when big, tough NFL players say proudly that they love one another. But it’s not the same thing as Justin Britt’s putting his hand on Bennett’s shoulder and saying: “I am going to try and understand what is going on in the world, and why it is happening. None of it is right. None of it is what should be happening.… I wanted to take the first step tonight, and I felt like I did.… What Mike said, and how he…thought a white player should do it, that kind of triggered my mind because I see what is going on.… We all have choices whether to be an example or be a follower.… That is kind of the purpose, to make people nervous and make them not ignore it.… I’m going to continue to support Mike and support everything about it. As I learn more, I might sit with him if things don’t get better and things don’t improve. But right now I’m just going to continue doing what I’m doing.”

Chris Long was also standing with Malcolm Jenkins, a player who was raising his fist because the “criminal justice system is still crippling communities of color through mass incarceration.” Long was repulsed by the events of Charlottesville, his hometown, and wanted to tell the world.

None of this is at all to criticize Derek Carr. I wish every white player, in these times of Trumpian division, would showcase unity with their black teammates. It is, however, important to recognize the gap between calling for peace and calling for justice. One comes with a great deal more risk, a risk that Chris Long and Justin Britt have decided to take on, making the burden on their protesting teammates a little bit lighter and helping the all-important message that Jenkins and Bennett are trying to convey travel a little bit further.