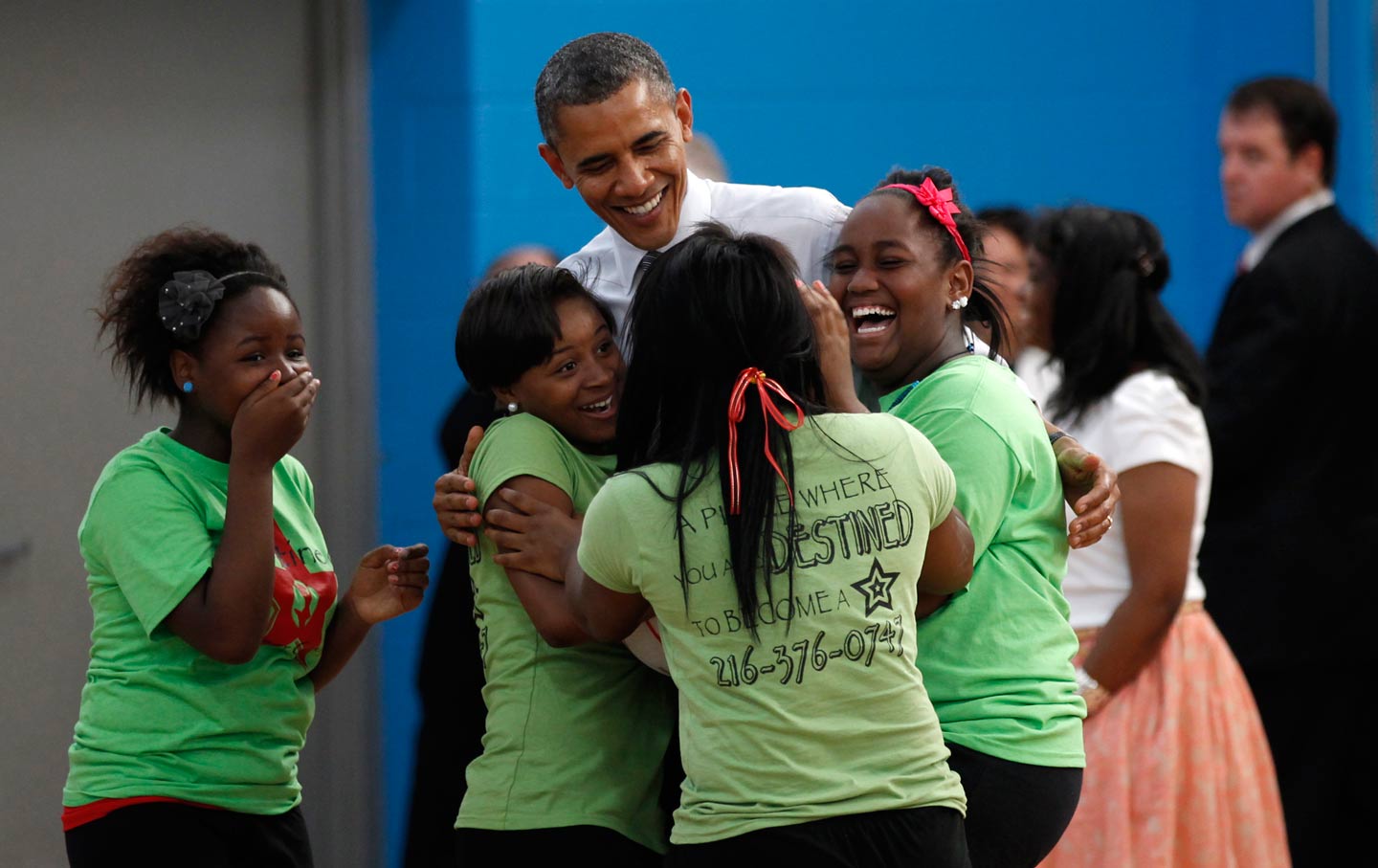 President Obama at the Boys and Girls Club of Cleveland. (Reuters / Kevin Lamarque)

On Friday, the White House announced its involvement with a new initiative to support the lives of women and girls of color. The phrase “My Brother’s Keeper” wasn’t uttered once by those who spoke as part of the daylong launch, but Friday’s announcement was a victory for the many who have critiqued the president’s initiative targeting men and boys of color since it was announced in February of last year. After nearly two years of pointing out that any racial justice initiative with the administration’s support must be also be responsive to the needs of girls and women, advocates and intellectuals concerned with the education, health, safety, and economic well-being of communities of color more broadly saw the White House respond.

The Obama administration, specifically the White House Council on Women and Girls, is not acting alone. As with My Brother’s Keeper (MBK), the initiative announced last week relies on funds from the philanthropic community. Whereas MBK began with a $200 million commitment from foundations and grew to include additional funds and in-kind donations from corporations, this new effort is fueled in part by $100 million from 20 public women’s foundations. According to the collaborative of funders, this money will go toward supporting job training programs and childcare access for low-income women. Academic and research institutions, led by the Anna Julia Cooper Center at Wake Forest University, have pledged an additional $18 million toward research and data collection on women and girls of color. (Full disclosure: The Nation is among the public-interest institutions signed on to the research efforts, and one of its contributing editors, Melissa Harris-Perry, is the director of the Anna Julia Cooper Center.)

Obama did not address the group gathered Friday, but Valerie Jarrett, senior adviser to the president was a presence throughout the day. “You’re right, it should be a billion dollars,” Jarrett said at one point, responding to a comment that the scope of the problem requires a greater financial investment. “What we want is to make sure that we build sufficient momentum,” she continued. Attorney General Loretta Lynch and Cecilia Muñoz, assistant to the president and director of the Domestic Policy Council, also addressed the White House gathering.

The administration’s evolution has been evident over time. Most notably, President Obama devoted much of his speech at an event hosted by the Congressional Black Caucus in September to recognizing the contributions of and challenges facing black women. “Black women have been a part of every great movement in American history, even if they weren’t always given a voice,” he said at the time. Discussing the devastation wrought by incarceration, he acknowledged, “Although in these discussions a lot of my focus has been on African-American men and the work we’re doing with My Brother’s Keeper, we can’t forget the impact that the system has on women, as well. The incarceration rate for black women is twice as high as the rate for white women.”

In addition to Obama’s nods toward the organizing pushing him toward including women and girls, there have been quieter efforts afoot within his administration. Last November, the White House Council on Women and Girls released a report, titled “Women and Girls of Color: Addressing Challenges and Expanding Opportunities,” that outlined what the administration had done to date that could be seen as positively affecting the lives of women and girls of color, such as passing the Affordable Care Act and establishing a campus sexual-assault task force. The report released Friday reads much in the same way, as a kind of summary of existing interventions: Last month, the US DOJ released a guidance on girls in the juvenile justice system. In July, the Office of Adolescent Health awarded 81 new grants to combat teen pregnancy. But this latest report also points to new efforts, most notably the commitment to releasing education and juvenile justice data that’s disaggregated by race, gender, disability status, and other variables. Organizers responding to MBK had been adamant in their demand for federal data that gives a fuller picture of the lives of women and girls of color.

Advocates have also taken the past two years to build examples of what a more inclusive approach might look like. Last month, New York City Council Speaker Melissa Mark-Viverito launched the Young Women’s Initiative, a counterpart to the Young Men’s Initiative that Mayor Michael Bloomberg started in 2011 to benefit black and Latino boys and men.

Joanne N. Smith, executive director of the Brooklyn-based Girls for Gender Equity and a co-chair of the new local initiative told me Friday, “We’re providing a replicable model for the White House Council on Women and Girls with the Young Women’s Initiative.” National organizing was important, Smith said, and so was going deep locally. For Smith and other advocates, this has meant hosting town-hall meetings in New York City and a national listening session at which women and girls of color have discussed their experiences in schools, in juvenile justice facilities and elsewhere to make the case that their needs are just as pressing as boys’. Much of the youth testimony pointed toward the need for interventions that address gender-based violence. The national listening session included participation from Kimberlyn Leary of the White House Council on Women and Girls, philanthropic partners, Speaker Mark-Viverto, New York City Public Advocate Letitia James, and City Council member Laurie Cumbo, Smith said.

Author Kiese Laymon participated in a number of organizing efforts over the course of the past two years, most notably as an organizer of a sign-on letter that challenged the administration to expand the mandate of My Brother’s Keeper. Laymon, who worked with a group called the African-American Policy Forum (AAPF) to advocate for change, expressed cautious support for Friday’s announcement and emphasized the efforts of AAPF in helping the administration see the light. “Our initial conflict with the White House was that MBK didn’t focus enough on institutional forms of discrimination and structural violence directed at our children, and that implicit in the MBK initiative was the assumption that black girls could wait,” Laymon told me via e-mail. “I hope the new initiative focuses on institutional forms of discrimination, not this so-called culture of poverty argument that gets right-wingers who hate both President Obama and our children to the table.”

The legal scholar Kimberlé Crenshaw, who directs AAPF and who coined the word “intersectionality”—a word repeated often at Friday’s White House event—also counted her group’s advocacy as contributing greatly to recent developments. “This is essentially what we have been agitating for. Listening to the lives of women and girls of color provides an understanding of what they face,” Crenshaw told me. Still, there are gaps between what her group called for and what is unfolding now, she said. For example, MBK was launched with a presidential memorandum directing top federal officials to review and assess how federal policies affect boys and young men of color and to report back within six months. No such directive from on high accompanied Friday’s launch. Dozens of cities have signed onto a My Brother’s Keeper Community Challenge. It’s unclear whether or how those efforts will intersect with the project launched last week.

Speaking truth to power is risky business, especially when doing so means arguing that the first black president has a blind spot on race. But Friday was proof positive that taking that risk can have significant payoffs.