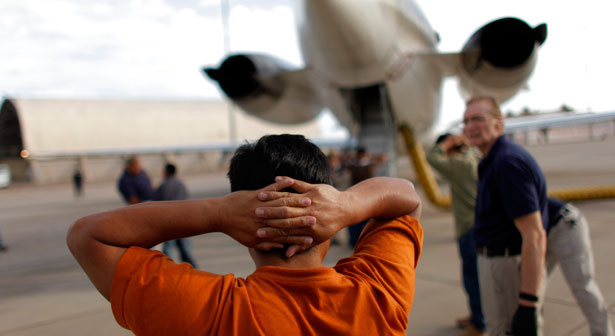 A Guatemalan man waits to board a plane during his deportation process in Mesa, Arizona. (Reuters/Carlos Barria)

Nothing should ever come between a mother and her child—certainly not hundreds of miles of fences and barren terrain. But somehow, Isidora Lopez-Venegas found herself stuck on the wrong side of the US-Mexico border.

Immigration authorities approached the middle-aged mother in 2011 on a San Diego street and asked if she had papers. While in custody with her son, a citizen who has an autism-related disorder, she later recalled, the officer intimidated them and warned that unless she agreed to “voluntary departure,” she might be detained for months or years, and “then they’d take away my child, he’d be sent to a foster home.” She was led to believe that the easier way to sort out her status would be to return and apply to re-enter the country “lawfully.” She wound up with a one-way ticket to exile: she didn’t understand that, thanks to an obscure immigration law, immigrants like her were subject to a ten-year bar to re-entry.

According to the ACLU, which later advocated for Lopez-Venegas as part of a class action suit against the Department of Homeland Security (DHS)—which recently reached a settlement that includes reforms for the California area—Lopez-Venegas “would have been eligible for cancellation of removal if they had gone before an immigration judge, given their strong family and community ties, their long presence in the United States, and their lack of criminal history.” But Lopez-Venegas, like about 80 percent of deportees from the United States, never got her day in court. Her case fell into a legal machine built for mass expulsion, churning people through “summary removal” policies that the ACLU says ignores immigrants’ constitutional rights.

According to the ACLU’s extensive analysis of deportation cases, the Obama administration’s unprecedented deportation record is made possible by a Kafkaesque bureaucratic procedure: “the summary removal infrastructure rapidly and reflexively deported hundreds of thousands of people, including people who are eligible for relief from deportation or who were already in or entering the United States lawfully.” People are not adequately informed of their legal options, and are sometimes deterred from seeking asylum. Parents and children are separated. Domestic violence victims are arbitrarily excluded. Some get funneled through “assembly line” hearings designed to “streamline” expulsion of migrants by the score. Even citizens can get deported if they are accidentally apprehended and lack adequate identification.

Longtime residents may get deported based on a past conviction (often a minor criminal offense that is treated as an “aggravated felony” for immigration purpose). These so-called 238b proceedings, ACLU says, “provide… no meaningful opportunity to provide evidence or question witnesses, and no verbatim recording of the proceeding.”

And as they await banishment, many are detained in facilities known for “verbal abuse, freezing conditions, inadequate food, lack of adequate medical care, and overcrowding.”

In the case of Laura S., deportation was a death sentence, according to one legal case described in the report. She was “stopped by police for an alleged traffic violation” in 2009 and turned over to immigration authorities. Though she told the DHS officers that she “feared being attacked by her ex-partner” if she was deported, “DHS officers coerced her to sign a voluntary departure form and dropped her at the bridge to Reynosa, Mexico.” There, isolated from her children and alone, according to the complaint, she was soon murdered by her ex-partner.

Several of the migrants the ACLU interviewed were “attacked, kidnapped, raped, or robbed after their deportation.”

In contrast to stereotypes, researchers found that many of those roped into these proceedings are not economic opportunists but people facing real humanitarian crises: though news outlets have in recent months focused on a seemingly sudden influx of “unaccompanied minors” from Central America, their migration stems from a broader pattern of youth fleeing persecution and economic devastation. The vast majority of Mexican children who migrate alone (who, unlike their Central American counterparts, do not have special access to an asylum hearing) are turned away, returned to an environment of epidemic poverty and violence.

Of the 89 individuals I interviewed who were ordered removed at or near the U.S. border, 55 percent said they were not asked about their fear of returning to their country or were not asked anything in a language they understood…40 percent of those asked about fear said they told the agent they were afraid of returning to their country but were nevertheless not referred to an asylum officer before being summarily deported.

DHS has recently promised some piecemeal reforms to deportation practices—for example, providing immigrants with more information about their legal right to a hearing and clarifying guidelines on referring asylum cases. But Mehta says, “we are concerned that without much-needed reforms, oversight and accountability, individuals with claims will continue to be removed in the border zone.” Noting that current laws are routinely flouted, she adds, “many people don’t need new rights to be in the United States; they need their existing rights to be respected by immigration enforcement officers.”

In this constitution-free zone, material dispossession compounds the denial of due process. According to another report by the advocacy group No More Deaths, the government regularly robs people in the deportation process. About a third of deportees last year were deprived of money or belongings. These takings occurred sometimes through direct confiscation and destruction of possessions. Or migrants may face technical barriers to accessing money “returned” to them in unusable forms, like special debit cards that are extremely hard to redeem from abroad. People are stripped of identification documents and phones, which may contain crucial contacts for relatives, or immigration lawyers. A significant majority of migrants surveyed reported that the theft had left them unable to afford the trip home, or even food and shelter.

But the government apparently finds it much simpler to return people back over the border, alone and destitute, than to return the modest possessions they carried.

This rampant theft of life, liberty and property at the border reveals that a government that seems obsessed with “border security” shows scant concern for the security of the people struggling to cross it. Yet the migrants are never robbed of hope, and that’s what keeps them coming back, day after day, determined somehow to redeem their dignity.