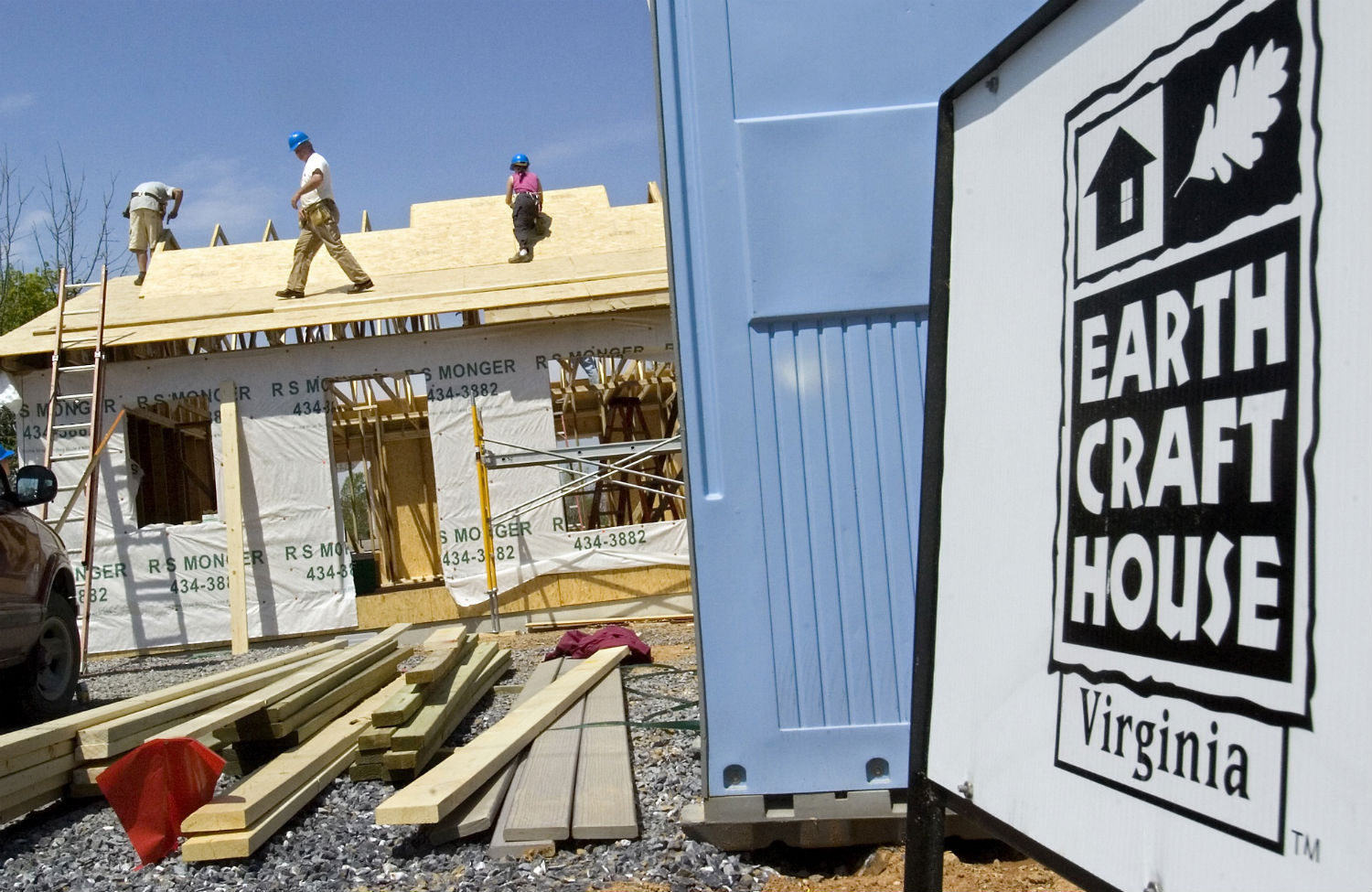 The latest Intergovernmental Panel on Climate Change report is in, reminding us once again that time is running out for governments and industry to decarbonize the economy: within a generation, policymakers must tighten emissions regulations, shift to clean energy sources, promote greener manufacturing and adapt technologies to reverse climate trends and mitigate the ecological impacts. Yet, while the assessment focuses on policy solutions, it leaves open questions about the labor element of climate policy: At the end of the day, the work of transforming how we produce and consume takes human hands. Where are the workers?

Five years ago, “green jobs” were all the rage in Washington. The American Recovery and Reinvestment Act was rolled out with a win-win agenda aimed at fixing the economy and healing the environment at once. Candidate Obama touted a “blueprint” for a green economy, with plans to create 5 million green jobs.

Then the stimulus sparked hopes of a Green New Deal—direct job creation to transition the workforce to a low-carbon economy, plus industrial policy to drive investment in green infrastructure and solar and wind sectors.

Today, the green has begun to wilt. Although the green technology and energy sectors are still expanding, the administration has offered little beyond the short-lived stimulus package and short-term tax breaks for renewable-energy development and corporate-friendly “public-private partnerships.”The drop in political enthusiasm for green jobs is in part the result of sustained conservative attacks coupled with continuing economic stagnation. Yet the fading of the green agenda’s populist buzz also reflects more profound social challenges in the transition to a cleaner, more sustainable economy.

Though federal green initiatives have provided vital seed money for wind farms and solar-generation projects nationwide, the blue-collar workers who have the most to gain from the projected clean-tech boom are still struggling to find any job, much less a green one.

Of course, green jobs are not the boondoggle portrayed by right-wingers. Solar panel companies and green building firms are hiring people, just not fast enough to dent the unemployment figures. In 2012 and 2013, several hundred projects related to renewables and green infrastructure were announced, potentially generating more than 180,000 green job openings, according to the green-tech advocacy group Environmental Entrepreneurs. But new investments have waned recently, in part due to lags in government supports. For example, many freshly announced new wind projects were halted abruptly in late 2012 when Congress delayed the renewal of a critical wind-production tax credit (goaded by aggressive lobbying from the dirty fuels industry). And the investment climate remains unstable, as another batch of credits remains in limbo for 2014.

Such setbacks demonstrate not only the crucial role of government investment but also the endemic unreliability of capital as the driver of an eco-conscious economic transition.

Capital has failed even more dramatically to match the hype around “green-collar jobs” as an employment program. Overall, even with the expansion of green-oriented businesses in the manufacturing, construction and technology sectors, workers involved in “green goods and services” made up under 3 percent of total employment in 2011. So while green sectors are growing through both public and private investment, green jobs are just one piece of a long-term fight against climate change, and they won’t solve the current unemployment crisis.

Indeed, some environmentalists say that green jobs might have been a more sustainable political venture if they had been more realistically billed as part of a broader climate change policy, not a big jobs booster in a slumped economy.

Jeremy Brecher, co-founder of the Labor Network for Sustainability, an alliance of environmental and labor organizations, tells The Nation that the stimulus did significantly boost new green energy projects and opened some opportunities for decently paying jobs in sectors like home weatherization.

But after the stimulus ended, those initiatives waned, and the evaporation of the administration’s political and fiscal support, he says, has “left a very bitter taste in the mouth of organized labor, who thought that by cooperating with Obama and environmental movements they would be able to really create substantial jobs for American workers. I think that they feel hung out to dry.”

Still, Brecher attributes the waning of the green jobs push to the same austerity mentality that has hampered other social programs: “It’s not that government can’t do anything, but that certain sectors of our political world have spent thirty years hamstringing and destroying the capacity of government to do anything.”

One political roadblock for green economic development is that the Obama administration oversold green jobs as a social project. Amid the Great Recession, the initiatives were originally framed as a labor-market intervention for communities hard hit by unemployment, with grassroots backing from environmental justice groups like Green For All. These good intentions did not translate into economic revitalization.

Five years on, the workforce programs aimed at low-income and disadvantaged communities have not yet been scaled up to a level that would have an impact on racial disparities in joblessness. As for generating skilled labor, a recent study by the Government Accountability Office found that of the 60 percent of Recovery Act training programs that had run their course by the end of 2012—supported by some $500 million in stimulus funds—only about half of those trainees had been placed in jobs; many had received only limited skills training and had trouble breaking into recession-battered labor markets in construction and manufacturing.

More broadly, lawmakers have neglected the kinds of infrastructure investments the country needs to really ameliorate unemployment, including green development along with basic public works projects.

According to a 2012 industry analysis by Jobs for the Future, green jobs progress has also been impeded due to mismatching of labor capacity and employer needs. Training programs, researchers found, were sometimes ill-suited for skilled technical positions, and many job openings were concentrated in higher-level production and administrative positions, which were harder for entry-level workers to break into.

The disillusionment with the green jobs hype may have stoked political backlash from labor. The AFL-CIO building-trades department is now pressing for the government to move forward with plans to build the Keystone XL oil and gas pipeline—directly antagonizing the climate change movement’s central campaign. And resentment has emerged from traditional mining communities against newly proposed environmental regulations on the coal industry, forging awkward common ground with pro-business conservatives.

But if you strip away the ideological polarization, you can start to see where social and environmental principles converge. People are profoundly worried about their futures, and across class and cultural lines, no one wants to see the health and safety of their communities pitted against their economic security. What if we started there: By changing social priorities, rather than twisting the concept of green transition around conventional frameworks of market-driven growth and profit?

The basic idea that the earlier green jobs rhetoric got right was environmental justice. This concept braids social and ecological values into a whole. As Brecher says, “We have a crisis of jobs and inequality… And we have a crisis of the climate, and fortunately, they can both be solved through the same policies.”

Some of those policies are already underway on the community level: Some cities and states have launched long-term municipal bond funding for clean energy, or developed funding programs for energy-efficient building and transit. But a holistic development agenda would incorporate all interests within the social ecosystem for long-term resilience: Curbing air and water pollution, promoting healthier forms of industrial and food production, and using democratic advocacy to advance economic and environmental values in tandem. Instead of letting corporations relentlessly exploit workers and natural resources, expanding public control over land-use, energy sources and industrial policy can help ensure that the sanctity of the commons is prioritized over the predation of capital.

Rather than bean-counting with job statistics and return-on-investment figures, activists can start rethinking green within the context of social protection, and focus on building policies around social equity—from subsidizing green power for low-income households, to shifting jobs from coal plants to the solar panels. Environmentalism can be a populist movement—if the political framing of climate policy centers not on just cutting carbon but cultivating justice.

Read more of The Nation's special #MyClimateToo coverage:
Mark Hertsgaard: Why TheNation.com Today Is All About Climate
Christopher Hayes: The New Abolitionism
Naomi Klein: The Change Within: The Obstacles We Face Are Not Just External
Dani McClain: The ‘Environmentalists’ Who Scapegoat Immigrants and Women on Climate Change
Mychal Denzel Smith: Racial and Environmental Justice Are Two Sides of the Same Coin
Katrina vanden Heuvel: Earth Day’s Founding Father
Wen Stephenson: Let This Earth Day Be The Last
Katha Pollitt: Climate Change is the Tragedy of the Global Commons
Michelle Goldberg: Fighting Despair to Fight Climate Change
George Zornick: We’re the Fossil Fuel Industry’s Cheap Date
Dan Zegart: Want to Stop Climate Change? Take the Fossil Fuel Industry to Court
Jeremy Brecher: ‘Jobs vs. the Environment’: How to Counter the Divisive Big Lie
Jon Wiener: Elizabeth Kolbert on Species Extinction and Climate Change
Dave Zirin: Brazil’s World Cup Will Kick the Environment in the Teeth
Steven Hsieh: People of Color Are Already Getting Hit the Hardest by Climate Change
John Nichols: If Rick Weiland Can Say “No” to Keystone, So Can Barack Obama
Peter Rothberg: Why I'm Not Totally Bummed Out This Earth Day
Leslie Savan: This Is My Brain on Paper Towels