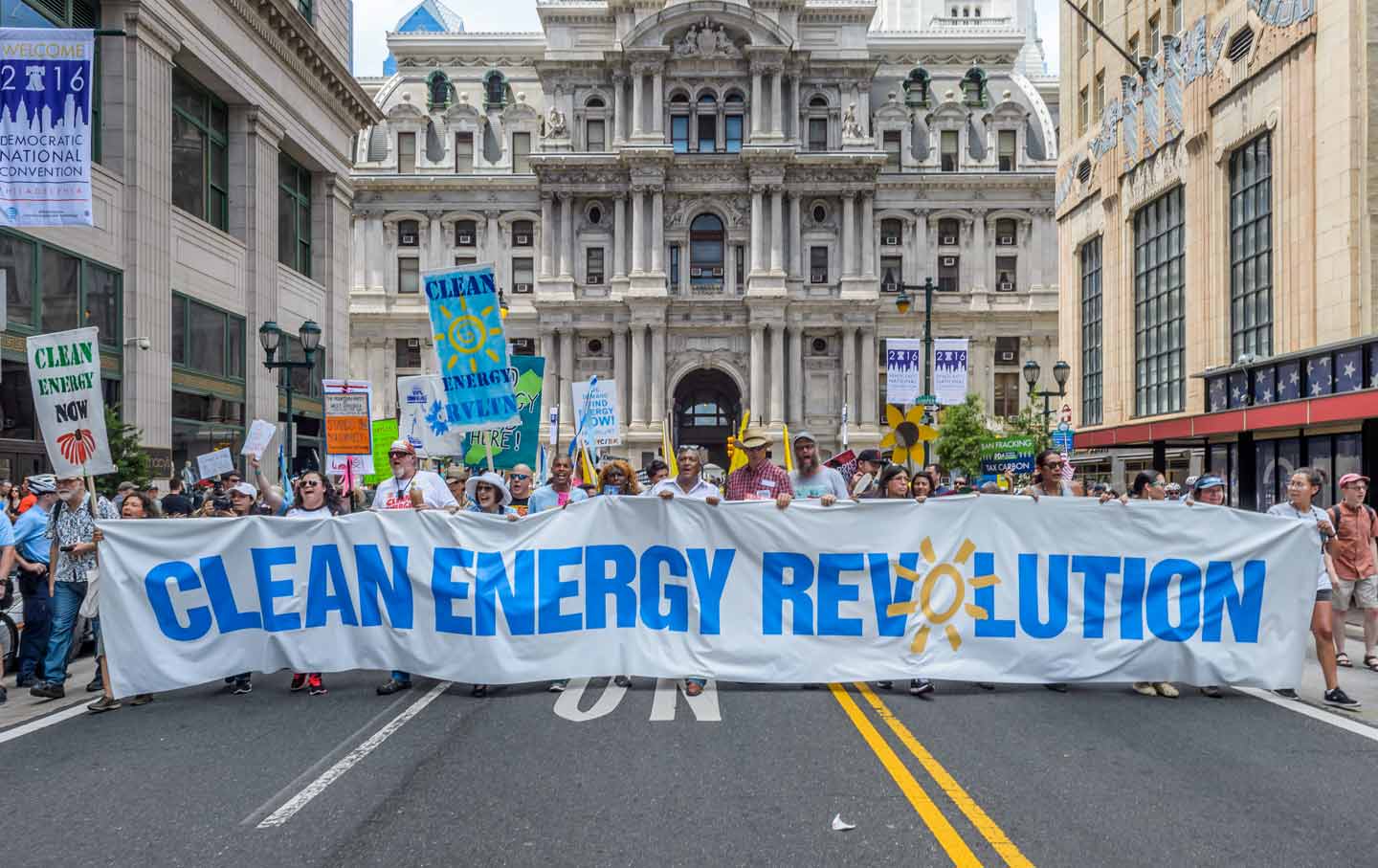 On the eve of the Democratic National Convention, protesters march for action on climate change. (AP Images / Sipa USA)

In the year and a half that the 2016 election has been underway, voters have heard a lot about about Hillary Clinton’s e-mail problems; about Donald Trump’s tiny hands, and their proclivity for grabbing things; about terrorism, immigration, regulations, the national debt, and Vladimir Putin. One thing voters have heard very little about is the environment. This is in part a failing of the press, which largely did not push the presidential candidates on climate change, energy, and other ecological challenges—despite a string of environmental disasters that swept from Louisiana to Flint, Michigan, this year, and the fact that 2015 was the hottest year in recorded history.

But thanks to a handful of ballot measures, serious environmental debates are raging in a few states. Voters in the Pacific Northwest are considering what would be the nation’s first statewide tax on carbon. Elsewhere, industry groups are trying to dupe voters with deceptive measures that sound green, but aren’t really. Here’s a roundup of three of the most significant, and fascinating, environmental questions facing voters this year.

A carbon tax in Washington

Climate scientists, environmentalists, and economists have long argued that putting a price on carbon would be one of the most effective ways to speed up the transition to renewable energy. But there is plenty of disagreement about how states and countries should price carbon. That debate is playing out now in Washington State, where Initiative 732 would create the first-ever tax on carbon in the United States, and the largest in North America. If it passes, its backers hope the plan will be looked to as a template for other states to act on climate without having to wait for national legislation. But many progressive groups argue that the plan is too flawed to support.

Initiative 732 was designed to appeal to the center. Starting at $15 per ton of carbon in 2017 and rising to $25 a ton the following year (roughly equivalent to 25 cents per gallon of gasoline, according the measure’s supporters), the tax would gradually increase to a maximum of $100 a ton. It’s “revenue neutral,” meaning that money generated would be used to cut taxes elsewhere—in this case, to reduce the state’s regressive sales tax by 1 percent, bump up a tax rebate for some 460,000 low-income households, and cut taxes on manufacturers. CarbonWA, the group behind the initiative, argues that a revenue-neutral plan will appeal to fiscal conservatives, while the tax offsets will protect low-income families and workers.

Not surprisingly, fossil-fuel and manufacturing interests are spending heavily to defeat Initiative 732. But many environmental, labor, and racial-justice groups who do generally support the idea of putting a price on carbon, including the Sierra Club, the Washington Environmental Council, the SEIU, and Black Lives Matter, have also declined to support the measure, because they believe a pricing mechanism would be more effective and equitable if the revenue were reinvested—in retraining displaced workers, in infrastructure (particularly in low-income communities, and others disproportionately affected by environmental degradation), and in renewable energy—rather than used to cut other taxes. Some of those groups are actively opposing the measure, arguing it won’t have a significant effect on carbon emissions, fails to address environmental0justice concerns, and would set a harmful precedent nationally.

The debate foreshadows significant points of contention likely to emerge in other states that consider carbon-pricing schemes; read more about its history here. The most recent polls show the initiative gaining ground with voters.

Solar-energy initiatives tend to be popular with voters. So what do you do if you’re a big utility company that fears competition from alternative-energy sources? In Florida, apparently, you perform a “little bit of political jiu-jitsu” to make an anti-solar measure sound like its opposite.

According to the industry groups backing it, Amendment 1 “promotes solar in the Sunshine State.” Actually, the measure could discourage the expansion of solar power by allowing utility companies to levy special charges on solar users. A similar fee effectively killed the solar industry in Nevada. Groups pushing the amendment include major utility companies Florida Power and Light, Tampa Electric Company, and Duke Energy. They’ve put up $17 million to support the measure, while most environmental organizations and solar companies oppose it.

The proposal has been called a “wolf in sheep’s clothing” and “a sham designed to keep more money in the power companies’ pockets” (by a Florida Supreme Court justice, who objected to allowing the measure on the ballot), as well as “phony baloney” (by Al Gore). Polling showed that the bait-and-switch was working—until late October, when the Center for Media and Democracy and the Energy and Policy Institute obtained a recording of the policy director for a utility-funded think tank admitting to the deception. Sal Nuzzo of the James Madison Institute in Tallahassee was caught describing Amendment 1 as “an incredibly savvy maneuver” that “would completely negate anything they [pro-solar groups] would try to do either legislatively or constitutionally down the road.”

According to one recent poll, support from the amendment has dropped from 84 percent in September to just under 60 percent—the threshold for approval. But the misleading advertising was enough to fool some early voters, including an 84-year-old woman named Barbara Waks, who called the The Miami Herald after it reported the leaked recording that exposed the industry’s deception. “I’m one of the stupid people who was duped. I voted incorrectly,” Waks told the paper. “I’m furious that they would put something on the ballot that would deliberately confuse people and I’m furious at myself.” This week pro-solar groups filed a suit with the state Supreme Court, asking the justices to reconsider the amendment’s language, and for the secretary of state to nullify the results of the election until the court rules.

California voters are considering two ballot measures related to plastic bags, which can harm fish and other wildlife. Like the solar-power amendment in Florida, both measures are sponsored by industry groups—plastics manufacturers, who’ve funded a front group called the American Progressive Bag Alliance—and they’re written in ways that may confuse voters.

Proposition 67 asks voters to consider repealing a statewide ban on plastic bags that the legislature passed and Governor Jerry Brown signed in 2014. “Yes” votes are required in order for the ban to go into effect; “No” is a vote to reject the statute. Muddying the issue is Proposition 65, which would preserve the ban but redirect a 10 cent charge that grocers and other retailers currently collect for paper bags to a conservation fund. The San Francisco Chronicle called the measure “a cynical attempt to undermine retailers’ acceptance of the plastic-bag ban,” while fooling voters into thinking they are voting for something environmentally friendly.